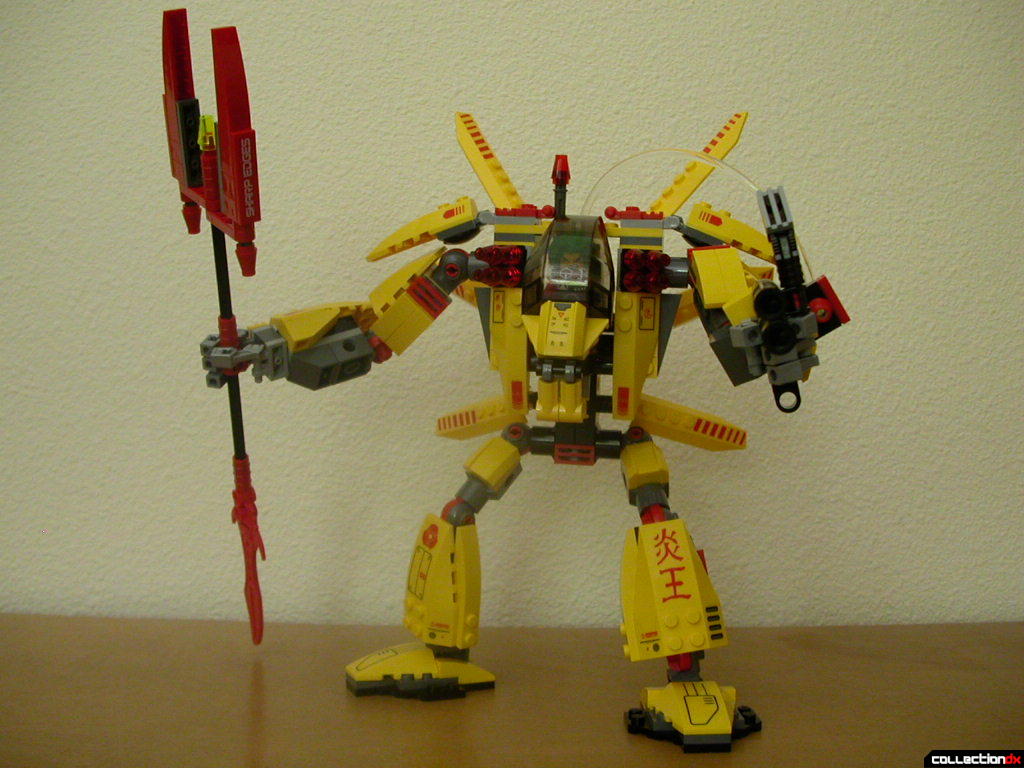 While the human-built Grand Titan and Stealth Hunter Battle Machines were the first produced by Exo-Force, there are plenty of designs still in construction and design stages. The Supernova is a combat vehicle based on data collected from the robot’s second strike on Sentai Mountain. Perhaps the most important feature that distinguishes it from its predecessors is its unique power generation system. Rather than just having an internal reaction for power, the Supernova incorporates the greatest power source of all- the Sun. With the golden yellow armor across its biped body, it gathers even the smallest wisps of sunlight and amplifies it with specially-designed internal prisms and superconductors into usable energy. And since Sentai Mountain is rarely undercover of clouds at the altitudes of the siege at the Tenchi Bridge, the Battle Machine is also rarely without a source of energy. The six large fins on its back act as both radiators and stabilizers. While the white Stealth Hunter spends most of its time in the air, Supernova is also equipped with a pair of heavy-lift turbo thrusters on either leg, granting it far-jumping, if limited flying, capabilities. This is best used to recharge itself at higher altitudes, and then quickly bound down the enormous crevasse of the mountain directly into combat. Supernova also has a new power link system built into the palms of its four-fingered hands. When holding onto its double-barrel heavy laser cannon and plasma staff, power is transferred directly from its generator to the weapons to conserve space and weight in both. And if damaged, the weapons can be discarded and the hands and powerful arms used for close-range combat. Two sets of four variable-yield grenades , inspired by those used on the robots’ heavy Thunder Fury Battle Machine, sit on either side of the chest-mounted cockpit just in case. Takeshi was chosen for his skills at heavy, variable-range combat with his red Grand Titan Battle Machine. However, his personal rage over the abduction of his family during the robots’ second assault on Sentai Mountain leads him to excel at pushing the Supernova to its limits. Like all of Exo-Force’s other Battle Machines, the Supernova uses a control system that mimics the movements of its pilot, which allows Takeshi to put his personal punch into the robots. 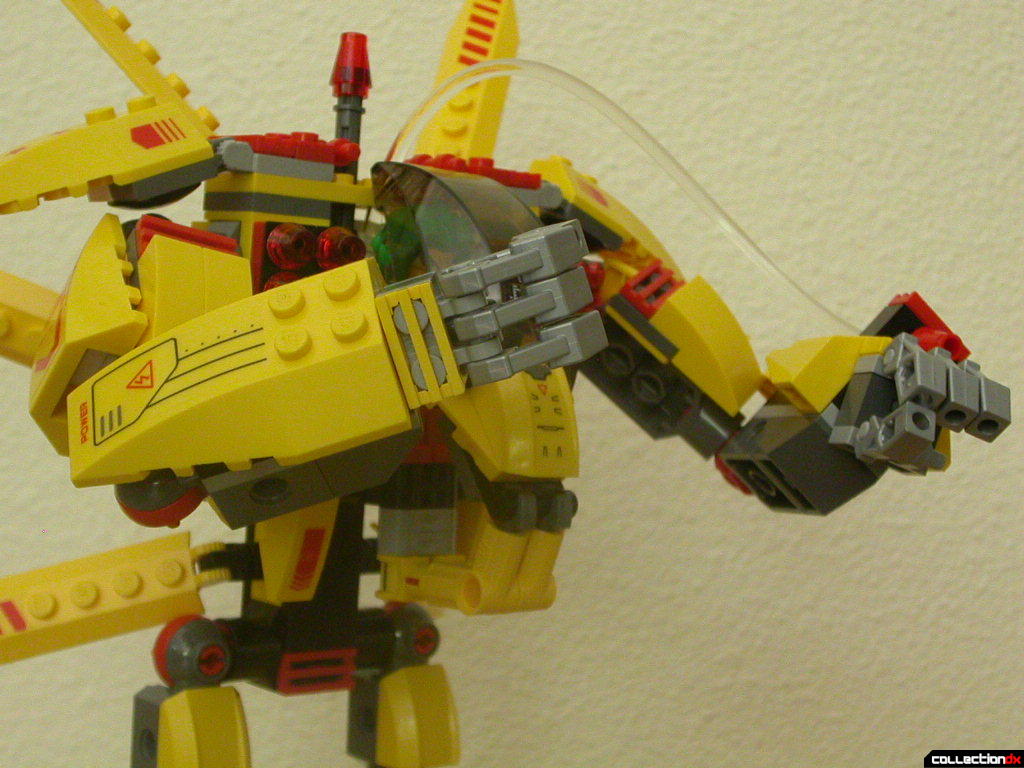 The Supernova (back) Battle Machine is the first of the summer 2006 designs, and does not disappoint. It has elements from the four larger Battle Machines in the first round, but stands well on its own. Using joints originally developed for the Lego “Knights’ Kingdom” line, it is very flexible. The shoulders, elbows, hips, and knees have two-axis joints that snap when moved, and allow for a wide range of fixed poses. The arms are great, large, muscle-inspired limbs and give it a somewhat gorilla appearance missing from all other Battle Machines up to this point. The ankles also have both snap and free-rotate joints, but this isn’t as much of an issue. The first seen in the new lineup, it has hands instead of mounted weapons, each with four same-sized fingers that open and close at the knuckle. (I should point out that the fingers are reused arms from the robot minifigs without the standard clawed hands inserted.) The white Battle Machine controlled by Hayato [appears as Ha-Ya-To] from the Gate Assault (7705) set was the first to have flexible fingers. Although, the single hand on that one couldn’t rotate at the wrist, both of the Supernova’s can! This is also possible because a pair of pegs project out of- or rather, through- the palms, and allow it to grasp more easily onto its two accessory weapons. The twin barrels on the blaster are the same as those found on both the Uplink (7708) and Sonic Phantom (7704) “Exo-Force” sets. The single-piece blade at the end of the “solar-powered laser staff” actually debuted as the sword of the evil Vladek (8786) figure from the first year of “Knights’ Kingdom”. The cockpit is the same open design featuring a large swinging section with a tinted canopy piece. Unlike Stealth Hunter (7700) & Grand Titan (7701), the design is a little front heavy and a little too open, so this can lead to slight difficulty finding good balance in some poses. The six long fins on the back each have a separate mounting point on the back or hips, and can swing and pivot about as you like and hold their positions very well, giving it a dragonfly- or fairy-like wing appearance. The shoulder armor, too, can rotate up and down, but I personally prefer them down as far as possible. 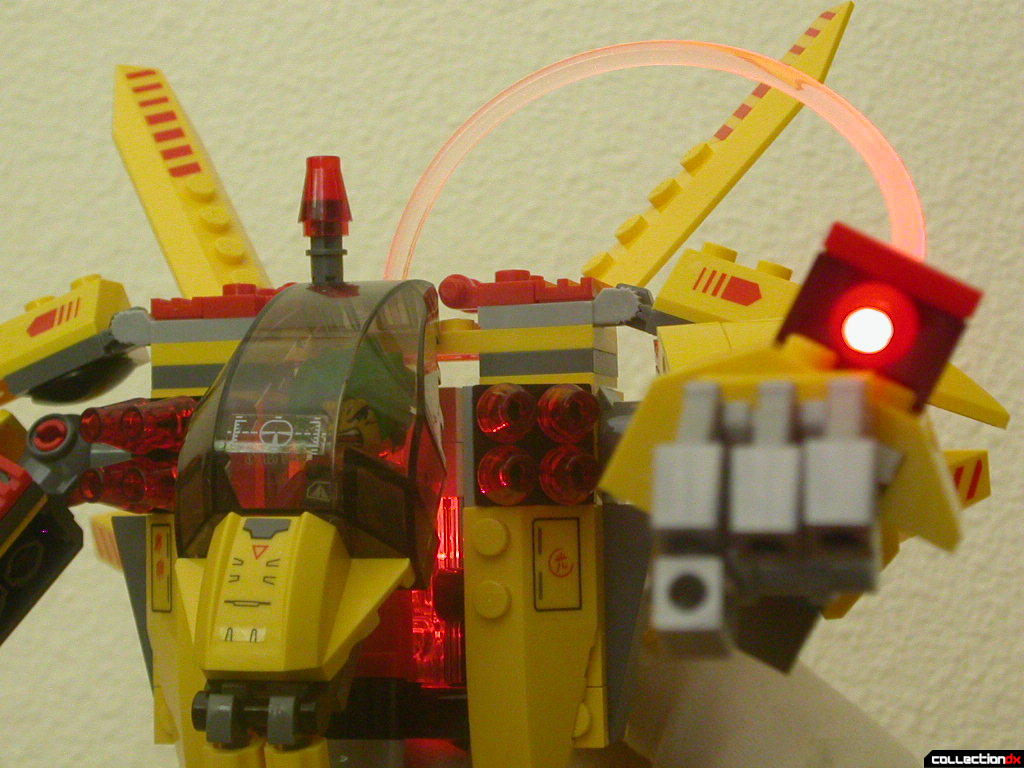 In addition to being large and poseable, the Supernova is one of the “Exo-Force” sets that use the newly-developed Lego light brick- a transparent 2 x 4 brick that has a small red light emitting diode (LED), a small, enclosed, self-contained battery, and a small trigger blended into the top. While the light brick can be snapped onto things, it has no studs of its own so nothing can be snapped on top of it or else the trigger couldn’t be accessed. The light brick in the Supernova set is activated when a multi-piece trigger is pressed on the back of the torso. This slides the front of the torso up slightly, and inside a Technic piece is wedged against the light brick’s trigger, activating the brick’s battery & LED. When this happens: 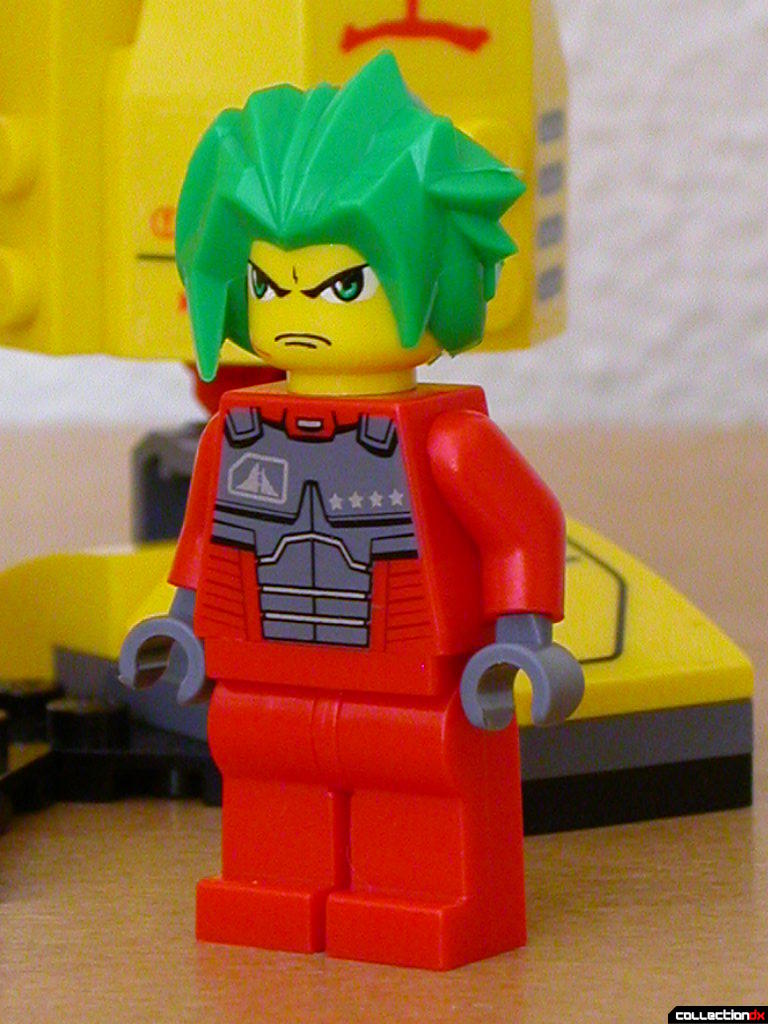 Lego Set #7701 also comes with the Takeshi minifig, who not only has two separate facial expressions (one painted on either side of his head), but a green spiky hairdo piece introduced in the “Exo-Force” line, which adds to the Japanese anime style of the series. When the head and hair are flipped around, Takeshi either displays a determined face, or a battle-cry expression. (This double-face design is similar to some of the LEGO “Spider-man” minifigs from 2001 and 2003.)

Normally, when a Lego set needs specific details on a part, such as a control panel or flag, the image is printed or painted directly onto specific parts. However, the “Exo-Force” line breaks that mold by using stick-on decals; something that was rarely ever used in the past. There is a small sticker sheet which provides allegiance markings, warning symbols & notices, and names- some of them written in Japanese text! Translations of the Japanese text are given on the sticker sheet, but do not go on the parts. This serves to allow for a wider range of piece marking without Lego having to create a completely different piece each time, and merges the “Exo-Force” and Japanese toy influence closer together. It does, however, have a small downside- because of the design of the decals, some of them cover places where other Lego pieces can go, which limits how a decal-applied piece can be used or taken apart. There is no conflict with Set#7712.

In addition to building the standard Battle Machine, the official Lego “Exo-Force” website (http://exoforce.lego.com/default.aspx) shows how the same pieces can be rearranged into an alternate four-legged Nova Crawler Battle Machine; found in the Online Building section of the site, and pictured on the back of the set’s box. (I haven’t built it myself yet, so I can’t give details on the alternate model.) So far, there is no indication that it will be able to officially merged with another set, but I’m sure MOC-ists [My Own Creation] won’t let that stop them from trying. 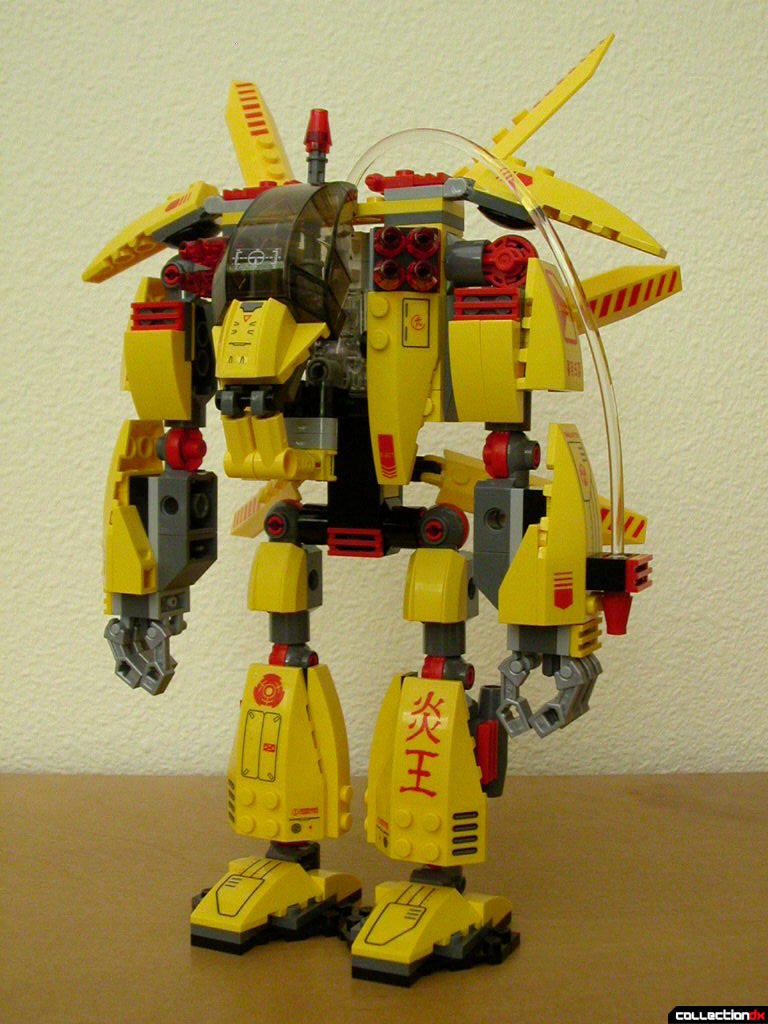 I liked the idea of mounted or internally-built weapons rather than having them as accessories that are held in hands and can separate. In fact, I even wrote to LEGO’s online customer service and said as much. However, the Supernova changed my mind a bit. The hands with poseable fingers and rotating wrists allow for more expression in the poses even though they don’t seem ‘realistic’ for a real giant walking war machine. If there were no accessory weapons, I would have been satisfied, but the pegs in the palms influenced me to alter my opinion about them. The ‘sensor’ mounted to the left arm is a simple way of mixing up the same idea from other sets, but works here. As I stated in other reviews, the length of the fiber-optic cords with these “Exo-Force” sets usually seem too short for some poses, but here it’s no problem. The little thrusters on the back of the legs add a bit of detail to an area that was largely ignored & neglected on the previous walking sets (something else I complained to LEGO about). The six fins were a cool idea, though, personally, I would have had them placed at roughly the same point to produce a more convincing feathered wing design like a peacock’s tail, but I like how they can move and stay posed so I have no complaint there. (Gundam Wing-Zero Custom, anyone?) My only really big complaint with Set #7712 is that it’s a little front heavy, and that the hips might have been moved a little further forward to accommodate for this. But, as I’ve stated earlier, I like where this series is going, and I look forward to the rest of the 2006 line-up!