In Task 09- “The Ninja of the Paper Crane”, a Dark Shadow monster is destroyed by the Boukenger, and then revitalized as a giant. To complete his objective, he swallows an entire house right off of its foundation, trapping an old woman inside with a Precious. The Rangers form DaiBouken, but the monster taunts them, saying that if he is destroyed, the house he has just swallowed will be destroyed as well. With Bouken Yellow in a near panic over the old woman inside the eaten house, Bouken Black deploys Gougou Vehicle #9 and jumps in to control it. From within Gougou Crane’s cockpit, Bouken Black maneuvers the crane’s extended boom over the monster while DaiBouken peels its large mouth open. Like a fish out of water, Gougou Crane shakes the monster around until it finally lets go of the house. 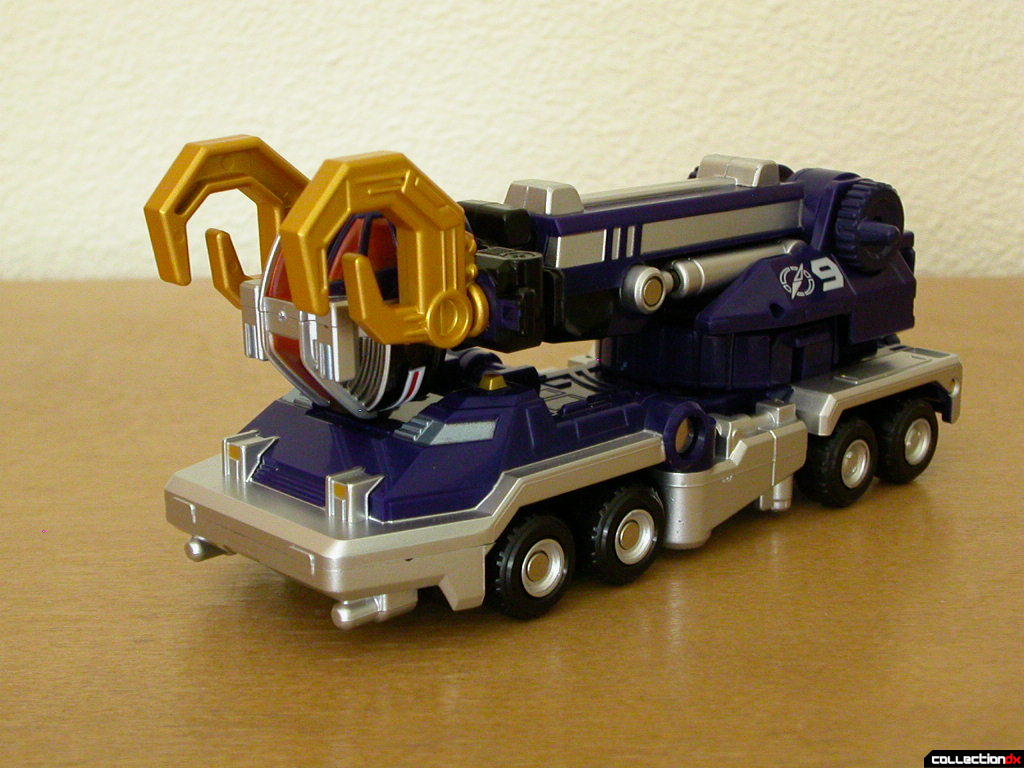 Gougou Crane (back) is similar to Gougou Gattai Vehicle #2 - Gougou Shovel in several ways, but only in general appearance. They both have long arms that rotate independently of their bases, and rotating supports that help balance them. But, they each have their own unique features as well. Gougou Crane’s, eh- crane extends out another 1¼” to give the boom a slightly longer reach. At the end of the boom is a pair of large immobile gold-painted claws which are positioned on either side of the brown-painted windscreen of the cockpit. At the back of the boom on the rotating base is a spool that holds about 4” of black string, more than enough to reach to the ground it sits on and then some. As a bonus detail, a pair of hydraulic pistons sits on either of the crane boom and extend whenever it tilts up or down! The entire crane boom can also rotate completely around in 45° increments. The wheels, like on Gougou Gattai Vehicle #3 - Gougou Mixer, have eight black PVC tires as well. Very, very cool and fun functions!

For those of you wondering what the differences are between the Gougou Gattai Vehicle #4 - Gougou Crane from “Gougou Sentai Boukenger”, and it’s English-speaking counterpart - the —

Even more-so than Gougou Shovel, Gougou Gattai Vehicle #4 - Gougou Crane is very fun to play with even though the crane doesn’t reach that high or that far. The pistons are also a really nice touch; I liked it a lot. I have no complaints whatsoever. Highly recommended!

As of the posting of this review, DaiBouken Crane- the combination between Gougou Crane and DaiBouken- has not been seen, so it is not known what kinds of attacks or additional capabilities it has. I suspect that they may mirror those of the next combination... 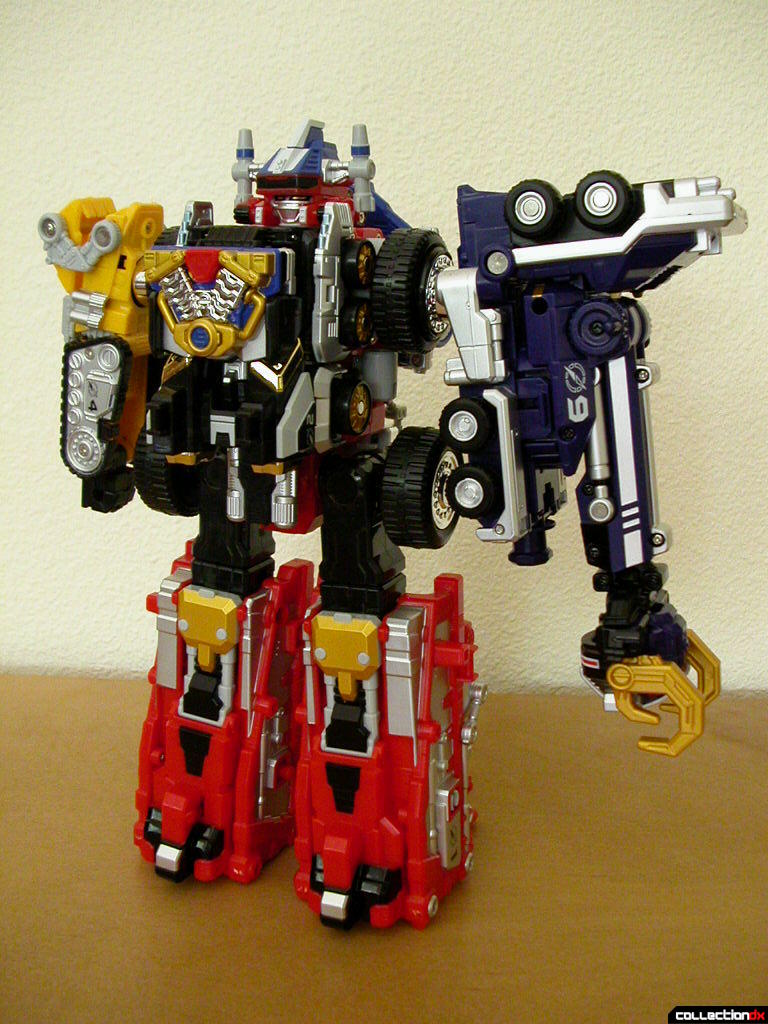 DaiBouken Crane (back), like the others before it, seems lopsided because of the smaller arms the DX Gougou Gattai DaiBouken has. However, for DaiBouken Crane, the large crane boom looks more like a grappling hook mounted to the handless left arm. The crane boom and hook can still be extended and retracted in this form as well, though the base rotation has been disabled because of the transformation. The DX DaiBouken’s unusual flexibility allows for some interesting poses. One thing about the combination, though, that isn’t explained very well is what happens to Bouken Pink’s Gougou Marine Diver. The instructions say it’s supposed to attach inside DaiBouken Crane’s right leg, but on the show so far, there’s no mention of it. It does help a little with balance, though, and eliminates extra pieces from lying around all over the place.

Gougou Gattai Vehicle #4 is the last and pivotal component required to move on to the first super combination mecha from “Gougou Sentai Boukenger”. Go on to the next page to review the "Boukenger" combination- Chou Gougou Gattai Super DaiBouken!