In “Samurai Sentai Shinkenger: The Movie- The Decisive War” (2009), a previously-sealed Ayakashi general from 800 years ago has steadily waged a three-day battle of attrition against the six Shinkenger. The only help they may have is to find a lost Hiden Disc forged by the first Shinken Red and head of the Shiba Clan, Retsudō Shiba (actor Masashi Goda, who previously portrayed OhBlue in “Chouriki Sentai OhRanger”). Sneaking into enemy territory at night, the five Shinkenger find the Hiden Disc at last, but it only contains a short message from Retsudō about achieving power by someone who deserves to find it. Rejecting this as useless in their current predicament, the worn Shinkenger nonetheless go out to battle on the fourth day.
The Shinkenger make it all the way to the Ayakashi before Shinken Red notices a kanji on the general’s armor for “power”. Striking this point and activating the Hiden Disc, Shinken Red’s ShinkenMaru transforms into the KyoryuMaru katana. It turns out that the power of the now-named Kyoryu Disc had lain dormant on the Ayakashi after it had sealed him 800 years earlier! Hyper Shinken Red uses the super-extendable blade of the KyoryuMaru to destroy many of the Nanashi Renjuu and the Ayakashi general. With the use of his second life, the Ayakashi reappears, and the Shinkenger summon and form Tenkuu Shinken-Oh. However, the general is more powerful than expected, and Tenkuu Shinken-Oh is broken. Realizing that using just the KyoryuMaru is not enough and they need to combine the power of past generations of Shinkenger with their own, the five Shinkenger transform the Shinken-Oh’s own DaiShinken into the Kyoryu Origami! Momentarily disabling the general, the Kyoryu Origami then initiates a samurai busou with Shinken-Oh to become Kyoryu Shinken-Oh! With its massive new sword, the Kyoryu Shinken-Oh uses the Tenchi Issen (“Heaven and Earth Flash”) to destroy the Ayakashi once and for all.

REVIEWER’S WARNING:
Though the Kyoryu Origami is a remold of the Hiden Saiseitou ShinkenMaru, it has different physical properties, specifically in that it has more mass. However, the selection of materials within has not changed. While the ShinkenMaru could be swung around as the role-play toy it is, the Kyoryu Origami cannot be swung about as casually (even with the legs removed, see below). So as a personal bit of advice, I strongly recommend that you do not swing this toy about even though it is meant to be a role-play toy.
(I am concerned that the plastic shaft running the through the length of the praxinoscope may not be as tolerant of the additional weight as it would normally be for the ShinkenMaru set. In the first few minutes I had this out of the box and assembled, I saw a very subtle torque-ing of the handle that I did not in the ShinkenMaru, so that’s why I’m giving this warning. Better safe than sorry!) 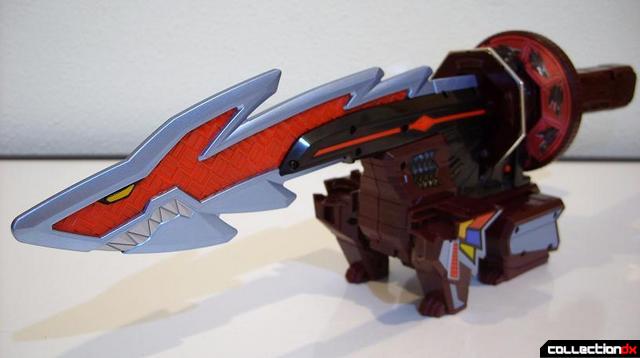 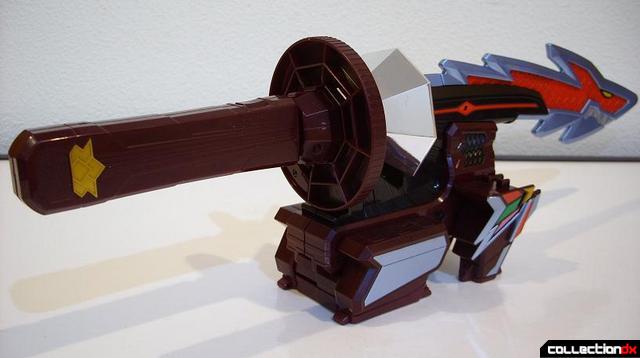 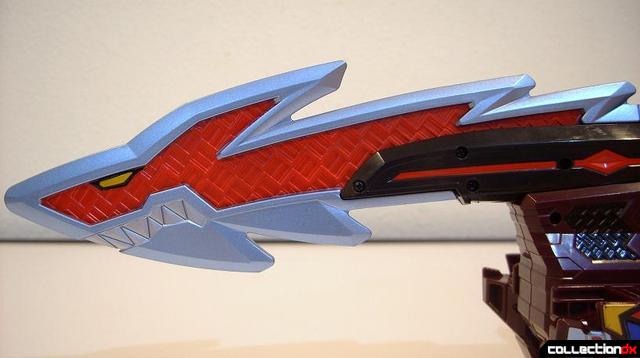 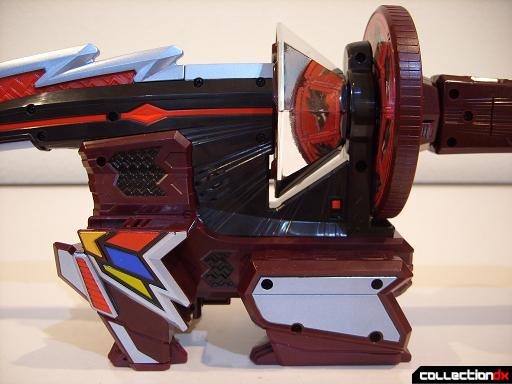 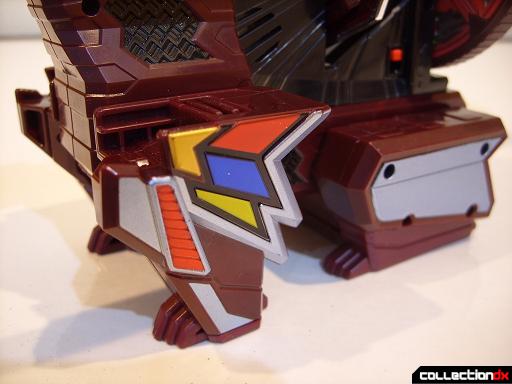 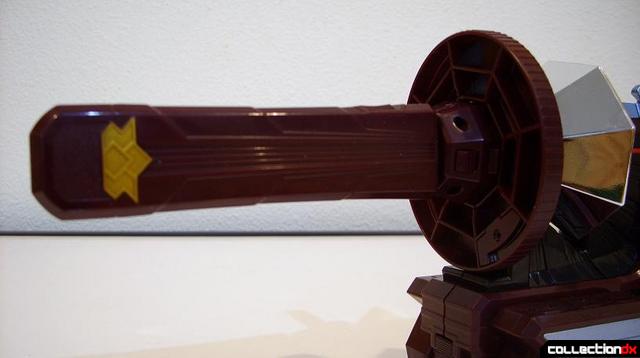 The Kyoryu Origami has no articulation whatsoever. Indeed, Bandai took extra steps to ensure the detachable parts remain in a fixed position, because while this is meant to interact with other DX Origami sets, it is also a role-play toy. Therefore it is completely static except for the praxinoscope feature on its back-half.

The Kyoryu Origami’s head/sword blade is made of soft PVC, the rest of the toy is ABS.

The praxinoscope feature from the ShinkenMaru is intact here, though the light-and-sound feature behaves in some different ways and has a number of different sounds.

The activation sound is different (explosion mixed with a slash). Squeezing the trigger once briefly gets you one of three randomly-played sound effects: 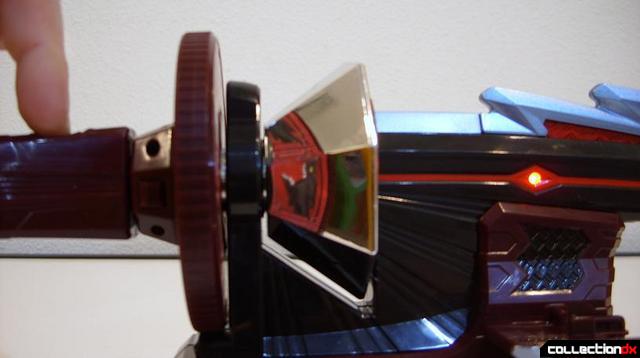 Also new to the Kyoryu Origami is a delayed reaction. If you hold down the trigger for 2 seconds (it will cycle through one of the previous three SFX first), you will hear: a chorus of men battle-cry, followed in-order by the Kyoryu Origami roaring once, three blasting sounds, and finally an explosion.
(I double-checked, and the ShinkenMaru does not have a delayed reaction to holding down the trigger.)

The praxinoscope feature works the same (the physical counter still clicks loudly even if the two AAA batteries- which you have to provide- are turned off), though the SFX it produces are different from the ShinkenMaru.

Spinning the Hiden Disc at the slower speed gets you a cycling power-up sound. But when the trigger is squeezed, it will make the same sound as the ShinkenMaru at its own slower speed (multiple alternating slashes).

Spinning the Hiden Disc at the faster speed gets you a different cycling power-up sound. However, unlike the ShinkenMaru (which played one of any six randomly-selected sounds), the Kyoryu Origami produces only one sound effect: the Origami roaring, followed by a sword slash.

#17 – Kyoryu Disc
(The Kyoryu Origami opens and closes its mouth.) 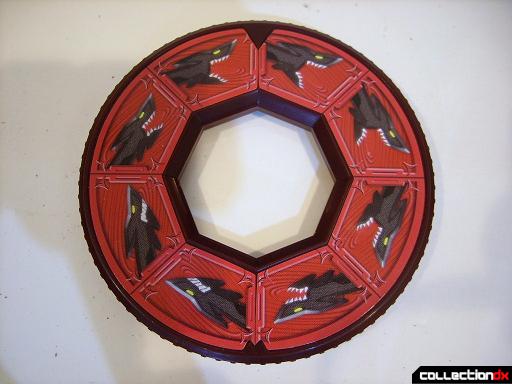 (If you absolutely must, you can attach the Kyoryu Disc to any other Hiden Disc-compatible toy.) 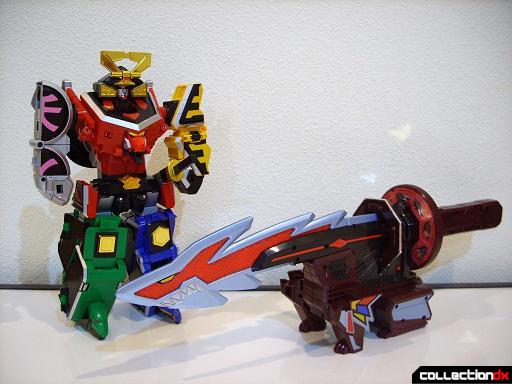 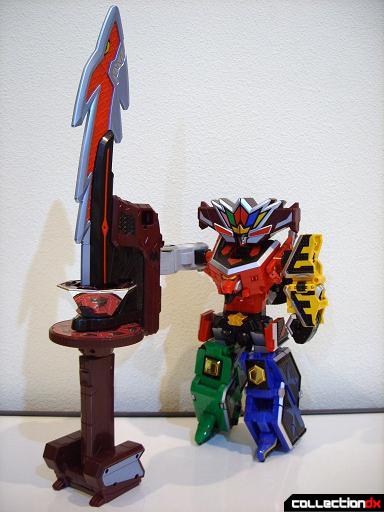 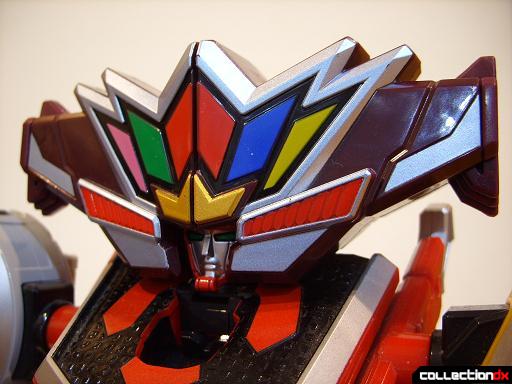 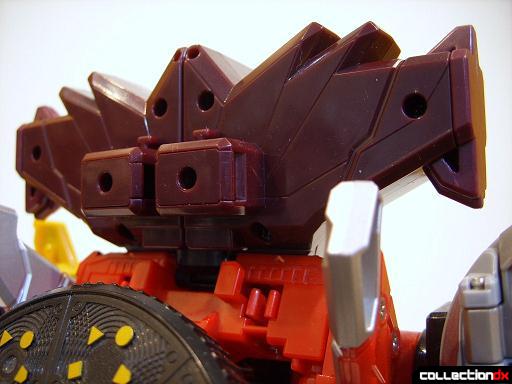 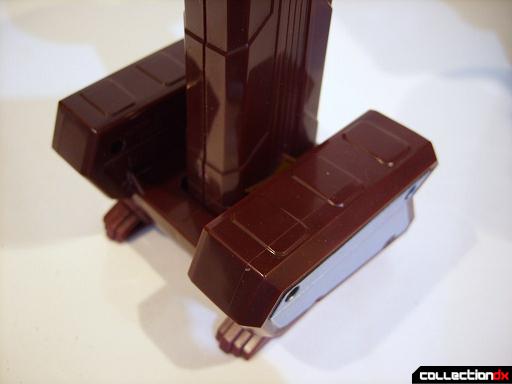 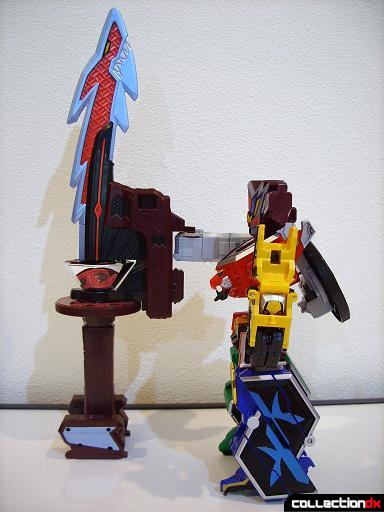 Because even this stripped-down mode of the Kyoryu Origami still weighs more than the DX Shinken-Oh, there is no possible way the latter can lift the former as it does in the movie and TV series. So all that the Kyoryu Shinken-Oh can do is stand there in a regal manner with its massive weapon, and that’s it. You wanna detach the sword, that’s fine, but you don’t get much out of this one unlike the other four accessory Origami sets and their respective samurai busou.

You just gotta wonder why they even made the effort on this one. ‘Movie exclusive’, ‘special edition’, blah-blah-blah… fine, I get that.
The whole point of this arrangement is to provide a fifth-and-final samurai busou for the Shinken-Oh, and that’s it. Turning it into an “Origami” certainly makes sense as far as the mecha system is concerned, but the ShinkenMaru isn’t exactly a design that lends itself well to that idea (i.e. it’s not based upon origami like the mecha are). Now, to have the Shinken-Oh wield a properly-scaled ShinkenMaru sounds just fine, but why go through all the effort of converting a wildly out-of-proportion role-play toy? (BTW, why didn’t they just go that route in the first place, as opposed to giving us the DaiShinken katana that we eventually got?) What I mean is, the whole point of the combat style of the Shinkenger- hell, even the name of the team- is based on shinkendo (‘Way of the True Sword’, or alternately ‘Way of Earnesty’), and so to give the Shinken-Oh a massive sword to bring against Gedoushuu is just simply poetic justice.

So… what went wrong? PLEX couldn’t be bothered to come up with an original Origami design that incorporated a dragon that transformed into a giant sword? They got lazy? It was a last-minute decision to convert a previously-made toy? They didn’t have the budget for a new toy? (I’m inclined to believe the second and fourth reasons.) They’ve made original movie-exclusive sets for Super Sentai before (DX Blast Buggy from “…DekaRanger: The Movie- Full Blast Action!”, and Jyuken Gattai Series SP - Rin Lion & Rin Chameleon from “…GekiRanger: The Movie- Nei Nei! Hou Hou! Hong Kong Decisive Battle!”), but the majority of movie-exclusives have been remolds and repaints, so I don’t see where the disconnection is.
I think my answer may come from the fact that they needed to preserve the spinning Hiden Disc gimmick in the Origami line, but didn’t want to put the money into another original design. And I believe that because of the simple fact that this set does nothing except spin that Hiden Disc; the electronics are simply a convenient cover for this, albeit a nice bonus.

…On the other hand, that is probably the best-looking mecha battle helmet to come out of a samurai busou, so I suppose I should give it a few points for that. 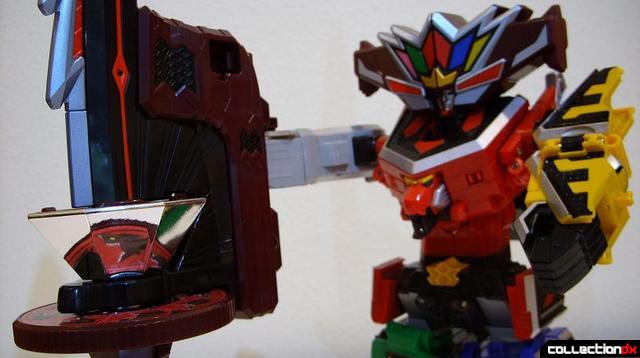 Now, on the flip side, it’s not very engaging as a role-play weapon either, except for the harsh-looking blade which actually isn’t a bad idea. (The Shinken-Oh’s DaiShinken katana had the first five Origami engraved on it, but no other "Shinkenger" weapon is given such distinguishing ornamentation.) Matter of fact, I get really bad vibes of the Hiden Kaisekiki Inrōmaru here, which eventually led to the Super ShinkenMaru combo weapon- a huge-ass block sitting just above the grip that isn’t visually striking by itself or when combined. (And that wasn’t even the part of the Inromaru that made me decide not to get it.) Having an animal form integrated into a weapon (particularly a bladed weapon) is traditional and yet never out of style no matter where or when it comes from. It all depends on the execution of the master forger who builds the thing. Again, this is where the toy falters, as the body is nothing special and the head gets all the attention (as perhaps it should?). So it gets to the point where PLEX and Bandai put so much effort into trying to make it look like an animal- and then failed to do so- that this thing can’t decide whether it’s an animal-styled weapon, or a fierce-looking animal with stubby legs and a really unflattering tail.

In its defense, though, I like the color selections of the plastics and paints (I just love that metallic pale blue, as opposed to just having more boring silver or white), and the surface texturing of the blade and main body are not bad in attempting to create the appearance of both folded paper and dragon scales. The head is a decent-enough cyber-dragon as well. And also, the animation of the Kyoryu Disc is one of the cleanest and most fluid of the ones I’ve encountered so far.

[In an interesting coincidence, on the very day I wrote this review (Nov 26, 2011), the KyoryuMaru and Kyoryu Origami were featured in the “Power Rangers: Samurai” one-hour made-for-TV crossover special “Clash of the Red Rangers- The Movie” as the Shark Sword and Shark Foldingzord respectively. Its combined form is called the Samurai Shark Megazord. There is a Deluxe-sized toy, but as no surprise it is a smaller, non-electronic remake just like all the other Deluxe Zords were in 2011, albeit with more-prominent detachable fins to justify the renaming.]

In the end, the Samurai Gattai Series EX – Kyoryu Origami serves as a decent end-cap to an accessory line filled with conflicts: it does not excel or fall any farther than its Origami predecessors, and so does not elegantly stand out as it was intended to. Recommended for completists.

…Wait- this is a dinosaur?

I remember having a similar reaction when I first saw it. I'd read about it on TV Tropes, went to the linked clip expecting something saurian-looking (or perhaps a Godhorn homage). And instead what I saw... It to me looked more like a shark with legs! I didn't see a dinosaur when I looked at the "head", I saw a great white shark's head and dorsal fin! And the ornamentation on the legs (especially the pair that make the helmet) also looked like fins to me.