The Droid Tri-Fighter was first deployed late in the Clone Wars by the Confederacy of Independent Systems. It quickly established itself as an effective anti-starfighter interceptor system, mounting several laser blasters and three racks of multi-purpose missiles on each encompassing arm. The droid’s intricate brain, located in the spherical gyroscope-stabilized core at the center of the fighter, could track and fire upon multiple targets while primarily engaging in one-on-one dogfights with Republic ARC-170 fighters. Manufactured by the Colicoid Creation Nest, who designed and built the ground-based Droideka-class destroyer droid, Droid Tri-Fighters retain the same triple-arm structure as their smaller brethren, which was based on a predator from the Colicoid’s home planet. This droid interceptor was often equipped with discord “Blue Streak” missiles, which dispensed independent arsonist-like buzz droids rather than an explosive warhead.

The outer blasters on each arm can ratchet backwards, but are primarily posed in the forward position.
Any of the three Rocket Battle Droids can be placed inside the brain core. 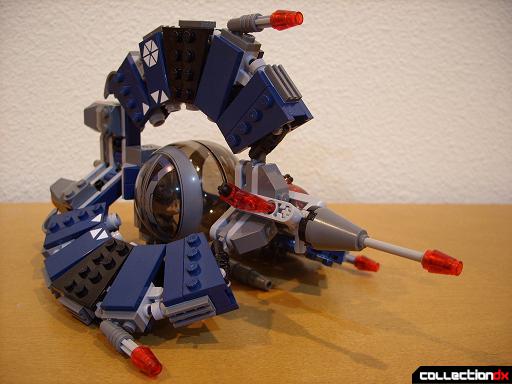 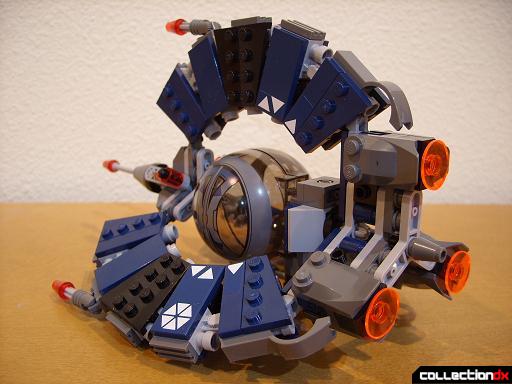 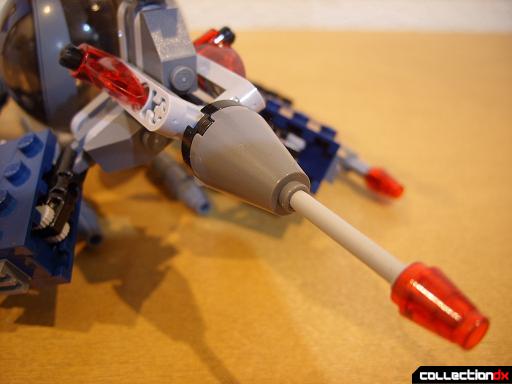 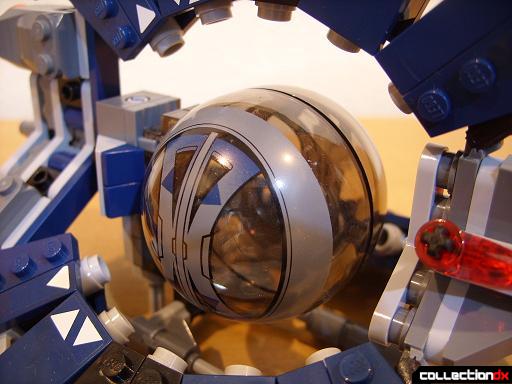 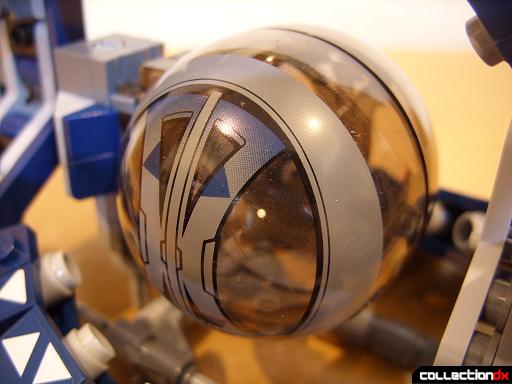 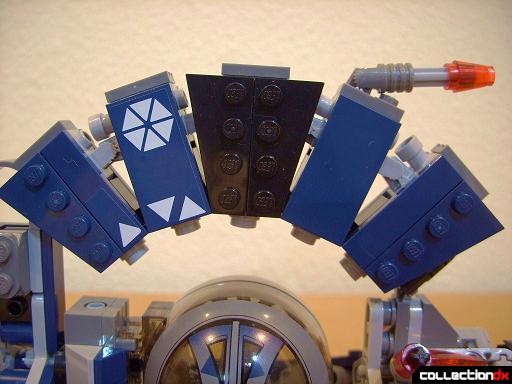 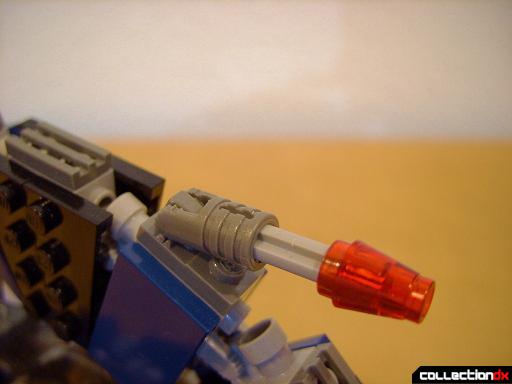 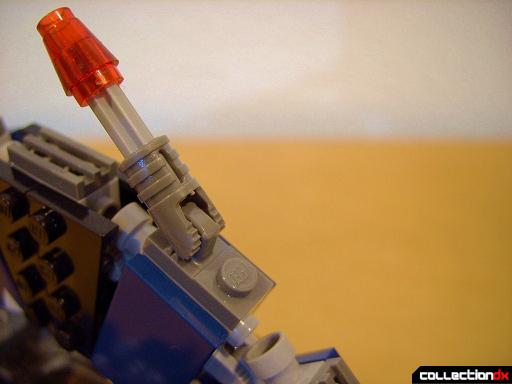 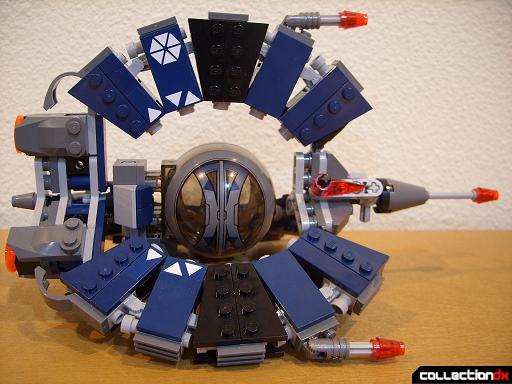 A pair of flick-fire missiles is attached underneath. Only two are provided with this set. 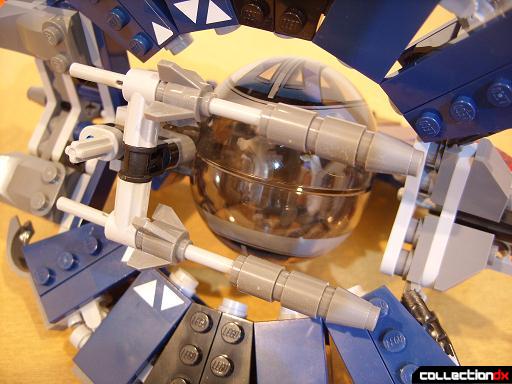 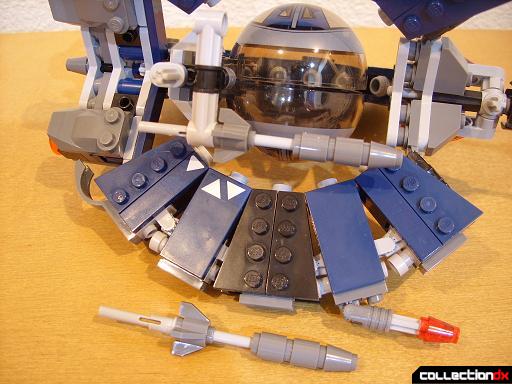 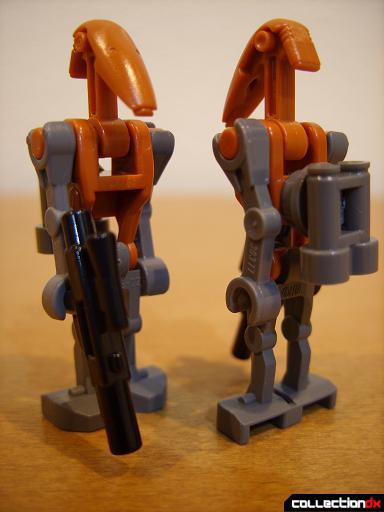 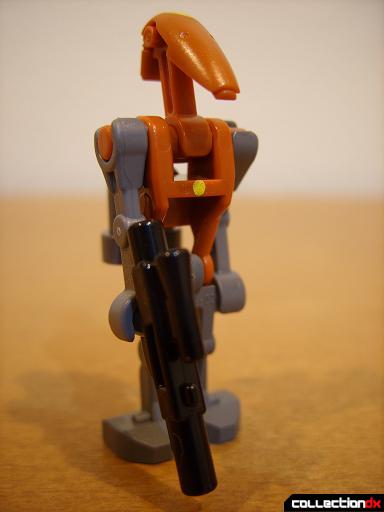 (Wow, those Bohrok eyes [from Bionicle] are just perfectly suited for this adaptation, aren’t they?)

There is only one reason, really, why you want this set: you thought the original Droid Tri-Fighter (7252) was too wimpy, not big enough, or you simply missed it the first time around in 2005. 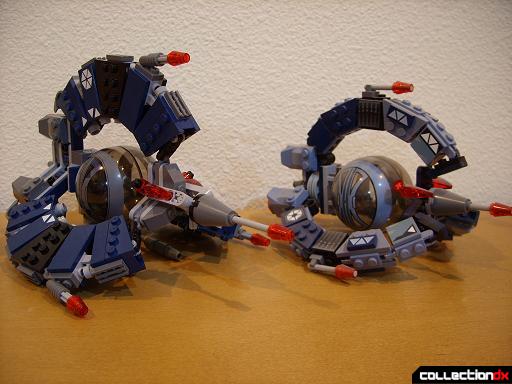 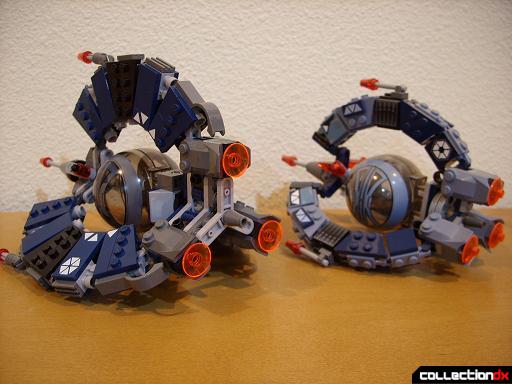 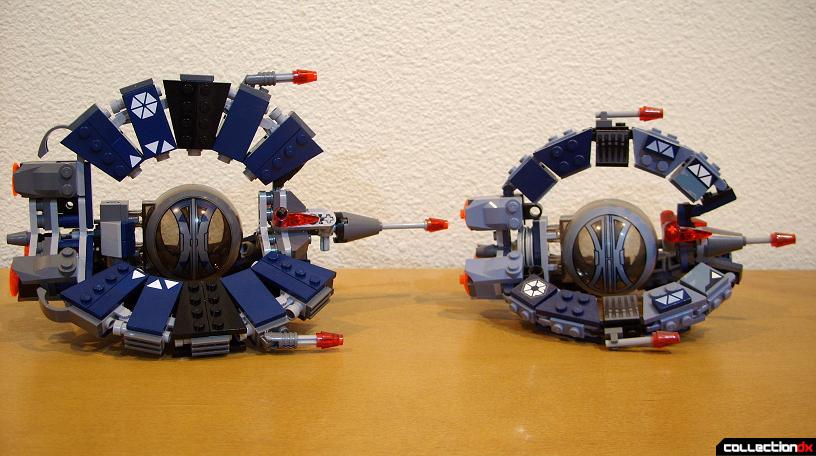 Well, this one isn’t much different than the first one (it’s only about 1/4 bigger, and 1 1/2” longer), has a slightly altered color scheme (completely eliminating the original’s pale blue), adds two flick-fire missiles underneath (which weren’t available yet in 2005), and replaces the cute-but-fragile Buzz Droid with three uninspired Rocket Battle Droids. A couple of parallels exist, mostly in construction process (engines > arms > core > head), the eyes and engine exhaust baffles, the parts for the core (identical size and function, but slightly altered print pattern to add more color), and option to stick something inside the core brain. The missile launcher was designed just so because it helps keep it flat on the ground rather than resting on- and even warping- the arms over time. I must say those missiles actually have good range on them, probably because they’re bigger than ones I’ve had in the past on other sets.
I say “meh” when it comes to B1-class Battle Droids, so those three are probably going to go in the spare-parts baggie in my desk; the rocket packs- just minifig binoculars- do nothing for me. 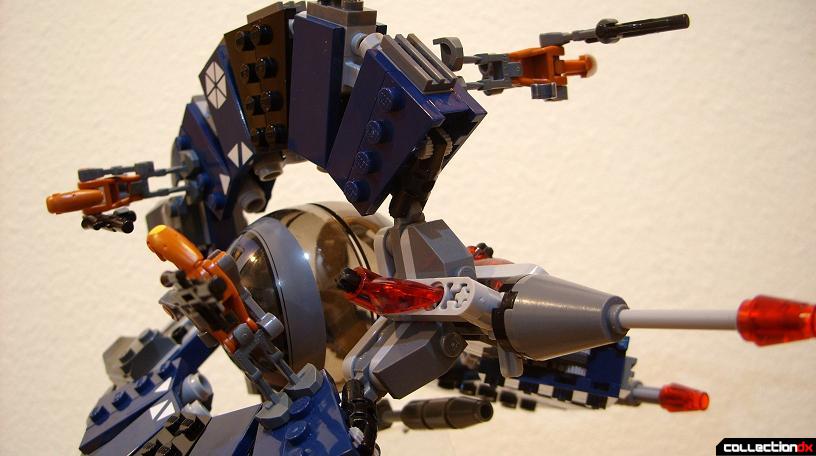 You know what would be awesome? If someone were to make a MOC of the titular teleportation ring from “Stargate SG-1” (1997-2007) using the same method employed on the arms. But I digress.
Anyways, this is a great upgrade for the Droid Tri-Fighter even if you don’t like the included missile launchers and Battle Droids. It’s also now elevated to accurate-to-minifig scale, so it poses a more serious threat to your ARC-170 Starfighter (8808). Maybe next time, the core will be able to turn like it does in “…The Clone Wars” and “…Revenge of the Sith”? Even though this is a pretty static set compared to most LEGO Star Wars sets, I still strongly recommend getting it!