In 2005, the evil Infershia clan made their return to the surface of Earth since their defeat ten years ago in their secret battle against the peaceful Sky Saints of the mythical land Magitopia. Miyuki Oz, mother of five, is the only human who has known what is going on, and remains as the sole defender against the Infershia. But just before she is killed by one of the Infershia’s generals, she reveals to her children their family history as secret defenders, and gives to them wand-like Magi Phones, which allows them to access their magical legacy.

When one of the Infershia generals wants to increase the stakes, they use their dark magic to grow their Dark Beasts and Super Dark Beasts to gigantic proportions. As MagiRanger, the five Oz siblings call upon their respective Sky Saints to grant them more power; growing themselves to become powerful MagiMajin. 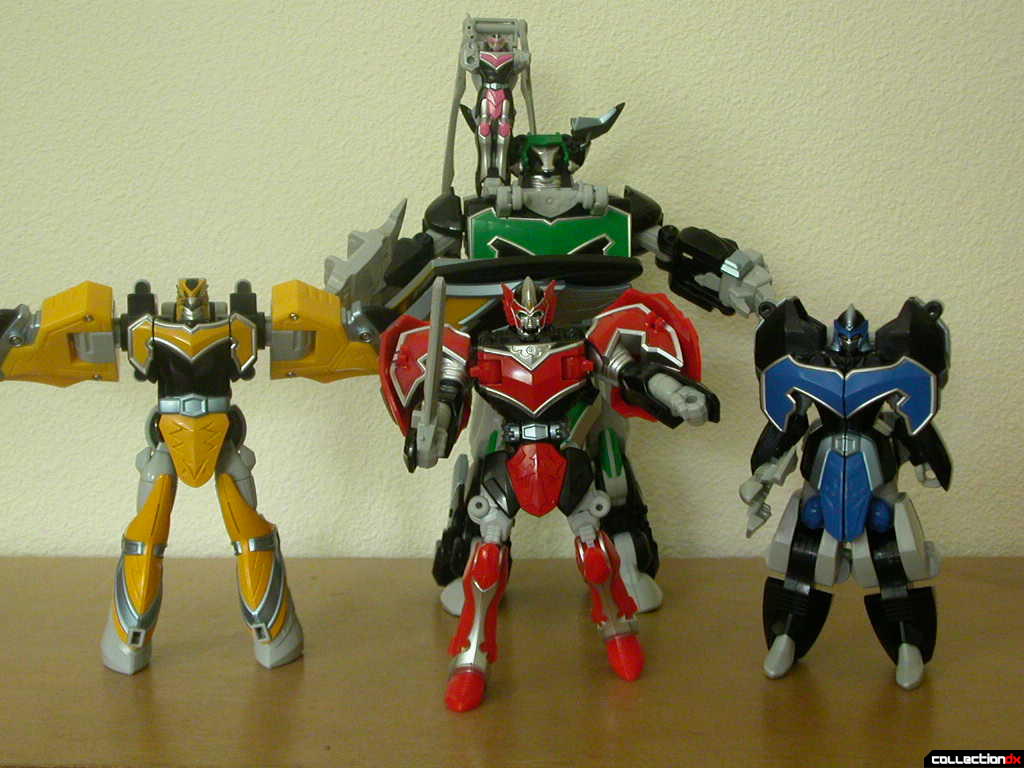 On first glance, the five MagiMajin are an odd couple. MagiPhoenix, by far, is the most flexible- with two joints in the shoulders, two joints in the hips, and the knees. He has an unprecedented level of poseability not see in- well... ever in Super Sentai history for a smaller component robot! MagiTaurus is second with a fair-but-limiting set of arm joints. MagiGaruda has good shoulders and allows for a wide variety of poses, though in some positions he might fall over unless the legs are adjusted just so. MagiFairy, because of its +1" stature, is limited to small rigid shoulder joints. It has no legs because they're molded into one ABS piece, and then painted on. The thin dragonfly-related wings on its back are needed to support her on a carpet, but they just barely clear a hard surface, and allow the single-piece foot to hold her up. MagiMermaid, unfortunately, lost out on a lot. Her movement is severely limited to just her elbows, and even they turn out only about 10-degrees to either side, just enough to allow her to grip her Mermaid Spear. The legs can be rotated around to simulate her aquatic form, but it requires separating her and reassembling her; even then, it isn’t all that convincing a change, and it wasn’t mentioned in the instructions.

Call me crazy, but even through the bulky armor & limited poseability, MagiMermaid does show something of a feminine figure- with the thin waist and slightly round bust beneath the stylized blue "M". MagiFairy has less to worry about here since she is rather slim already, and has to be in order to serve as the head of the MagiDragon. In my opinion, this was a nice touch by Bandai, since most female-related humanoid robots from previous Super Sentai series usually just ignored this for the functionality of the DX set. It makes them a little more relatable to the magic robots that they really are.

The first combination is known as the MagiDragon, and it is impressive. MagiTaurus, MagiFairy, MagiMermaid, and MagiGaruda participate in this spell, which [the first time they performed it] made MagiPhoenix feel left out at first...

“Turn us into the legendary Ryuu! MaRyuu Gattai!”

In this form, the consciousnesses of Makito, Houka, Urara, & Tsubasa merge together to become one mind within the body of the legendary MagiDragon. They do not think or talk separately, but think and act as one being. The MagiDragon uses its large wings to keep away from enemies, while launching powerful fireball attacks from a distance. It also has the large claws on its hands & feet, as well as the sharp blade on the end of its tail. MagiPhoenix can ride atop the combination, but operate separately from the combined minds. With him, he carries a combined weapon called the Phoenix Spear. Together, they can perform a fiery finishing attack known as the Magical Dragon Shoot. 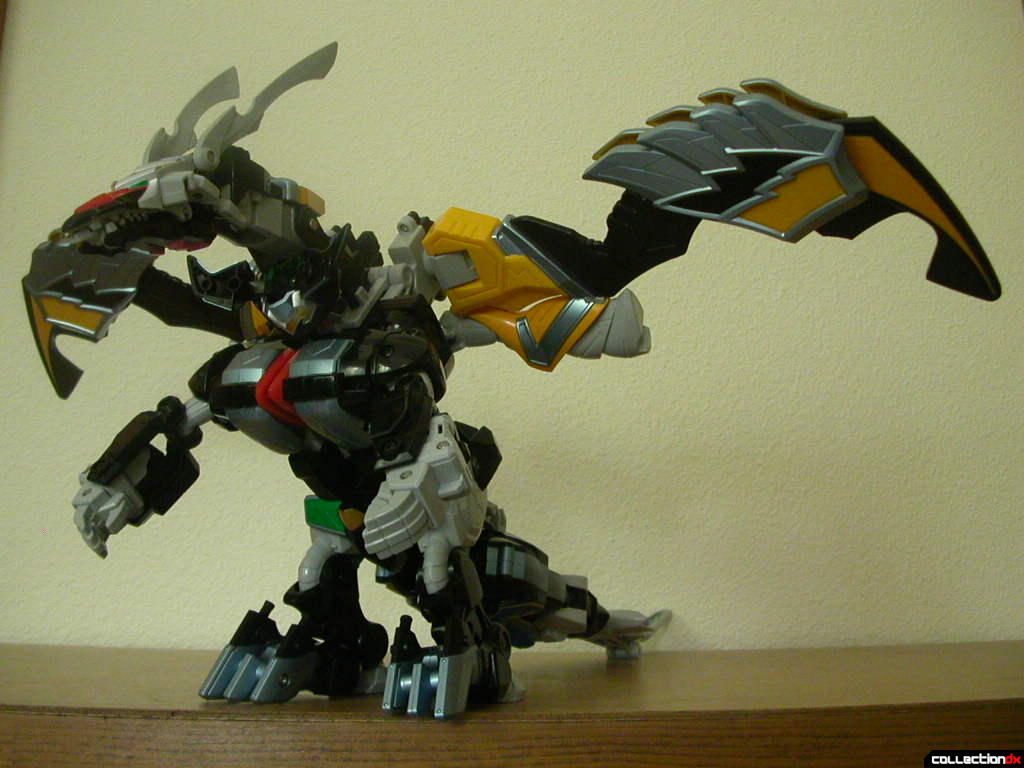 The MagiDragon is an amazing design, and is pretty big too. The mouth can open and close a little, but the solid foot of the MagiFairy gets in the way, though it does resemble some kind of long tongue. MagiTaurus' arms serve as the arms for the dragon, though the hands seem a little strange being upside down. The legs are large enough to easily hold itself up without support whether it's carrying MagiPhoenix or not. Actually, with the way the transformation works, there is a little flexibility with how the legs can be posed; though any other position might compromise its balance, and it isn't mentioned in the instructions. The tail is composed of the body and back assembly of the MagiMermaid. It can't move much except for the end of the ABS tail, and it really only just hangs there by gravity, so don't turn it upside-down! The way MagiGaruda's wings unfold to give the MagiDragon a larger wingspan is interesting, as is how it extends its chest to become the MagiDragon's neck.

In order to go up against a particularly powerful Dark Beast, the five MagiRanger performed a new spell they just learned, involving all five of them this time. MagiPhoenix was anxious to perform the complex spell, but MagiGaruda smacked him over the head and thought that he was childish for suggesting using it without practicing it first. However, the other three agreed with the decision.

"Turn us into the Majin-Oh. Majin Gattai!"

Instead of just merging their MagiMajin forms together like with the MagiDragon, the five MagiRanger were surprised to find that they were new avatars of their own souls within the MagiKing’s cockpit- appearing as chess pieces on a giant chessboard ! They can interact with themselves, but their combined MagiMajin bodies act as one. They use the symbols on the pedestals below them and their Magi Stick weapons to conduct commands and attacks. Its hand held weapon, the King Caliber, is used as both a sword, and as a wand to direct magical attacks at opponents, including the finisher King Caliber Mahou Slash. The King Caliber is composed of the Phoenix Spear, Taurus Axe, and a spare piece that is stored on MagiMermaid's back. 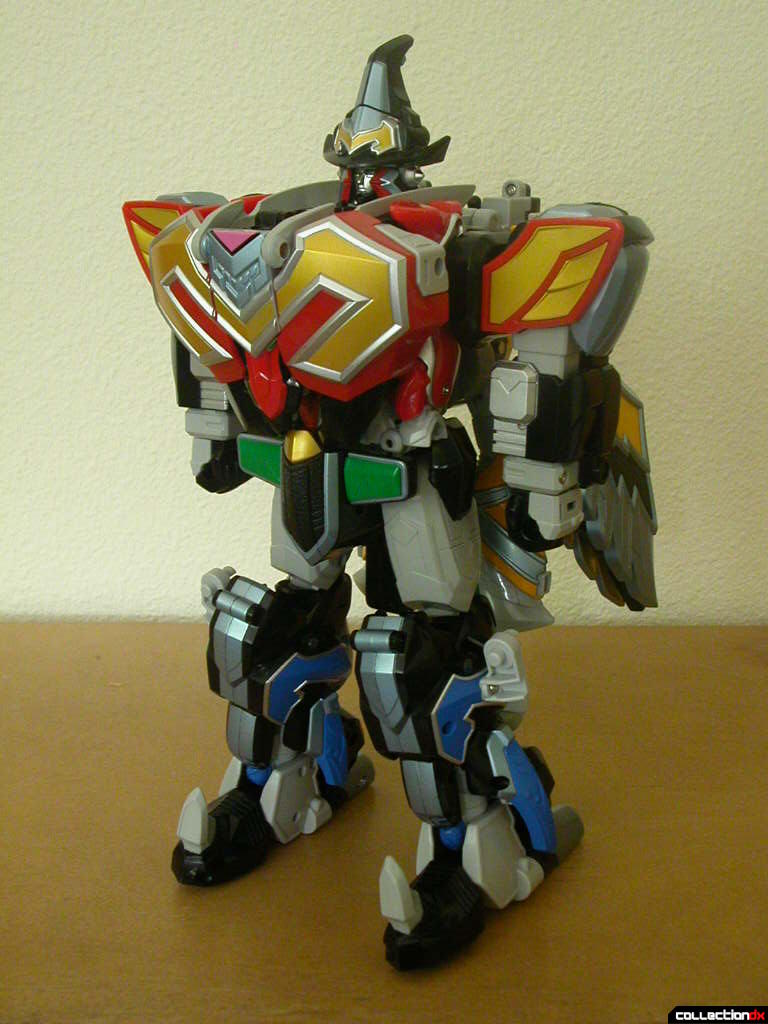 The MagiKing is an intriguing cross between a futuristic knight, and a wizard of fantasy- even incorporating a pointed wizard's hat on its head, and pointed-toe boots! The MagiDragon's head (MagiFairy), placed at the center of the MagiKing's chest, merges well with the large stylized "M" on its chest. And there is a simple wing & feather pattern on its shoulders. There's a pair of silver & yellow wings that drape over its shoulders like a short cape.

Just as with the MagiDragon, the MagiKing can deploy its wings for flight, and initiate attacks from the sky. They first used this particularly powerful flying finisher against one of the Infershia's transformed generals, Majin Gattai WolKaiser. 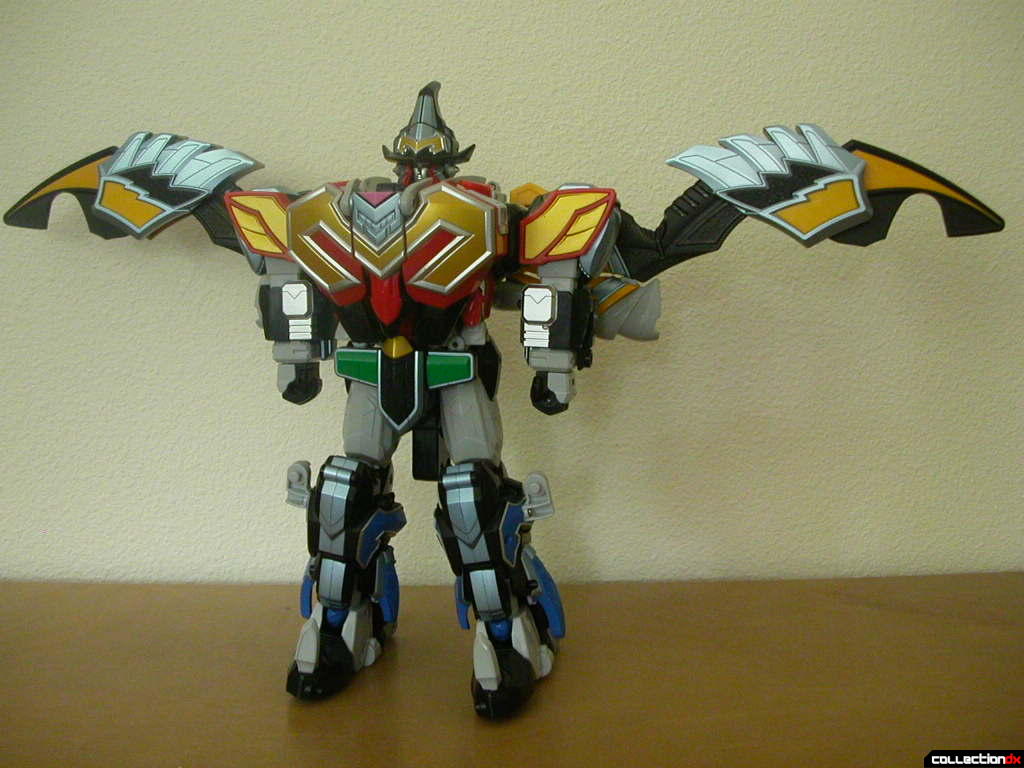 The deployed wings on the MagiKing's back seem fragile and more for display than for flying, but they have a limited number of positions they can snap into. The only difference for the MagiGaruda between the MagiKing and the MagiDragon forms is that the chest remains retracted rather than extended for when it's used as the neck of the dragon.

For those of you wondering what the differences are between the DX Majin Gattai MagiKing from "Mahou Sentai MagiRanger", and its English-speaking counterpart, the Deluxe Titan Megazord from "Power Rangers Mystic Force", well, let's say they must think American children are afraid of too much paint:

All molds and materials seem to be the same between the MagiKing and Titan Megazord.

At first glance, the DX MagiKing is an amazing design, plus it brought back the third alternate mode for the same set. But there were a few things that made me go “What [on Earth] were you thinking, Bandai!?”

But on the other hand, the MagiKing incorporated some good stuff too that made me applaud Bandai’s imaginative designs:

I am very, very impressed with the DX Majin Gattai MagiKing , plain and simple. It took some big steps in design without the gimmicks or electronics of previous years. It had a few loose ends as far as design, but I can overlook those easily. I recommend it highly. If they’re anything like the MagiKing, I’m anxiously looking forward to the other DX toys in this show’s line. 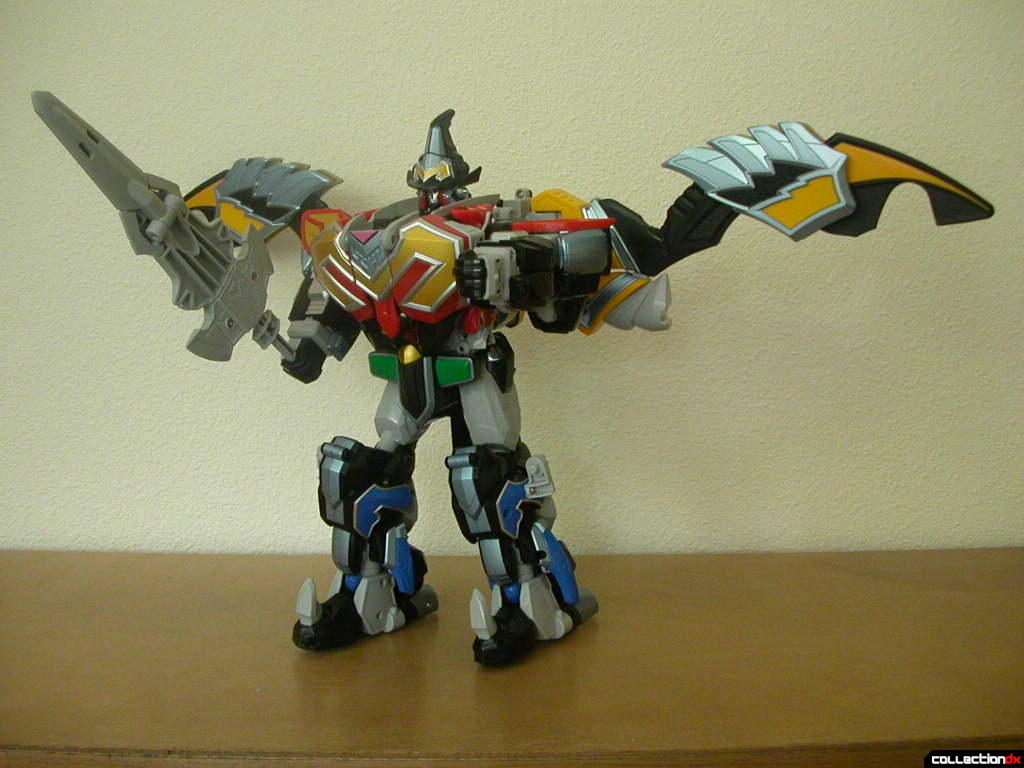 If you want to learn about the Deluxe Titan Megazord , please read Rob Braun’s review, also located on www.CollectionDX.com! 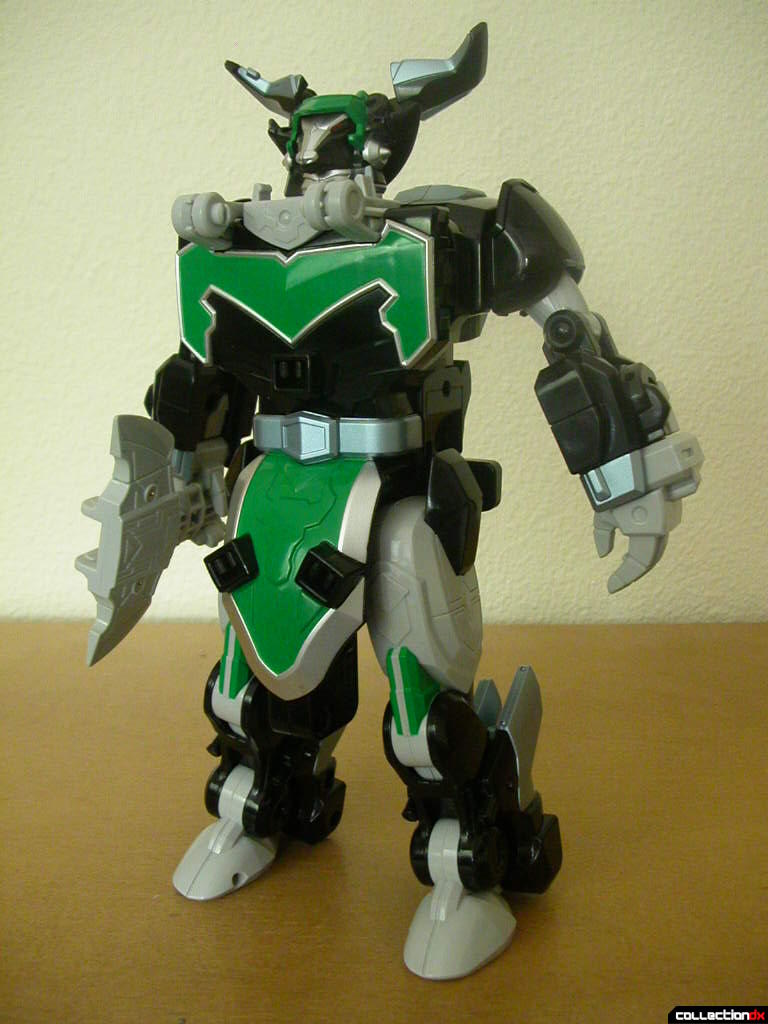 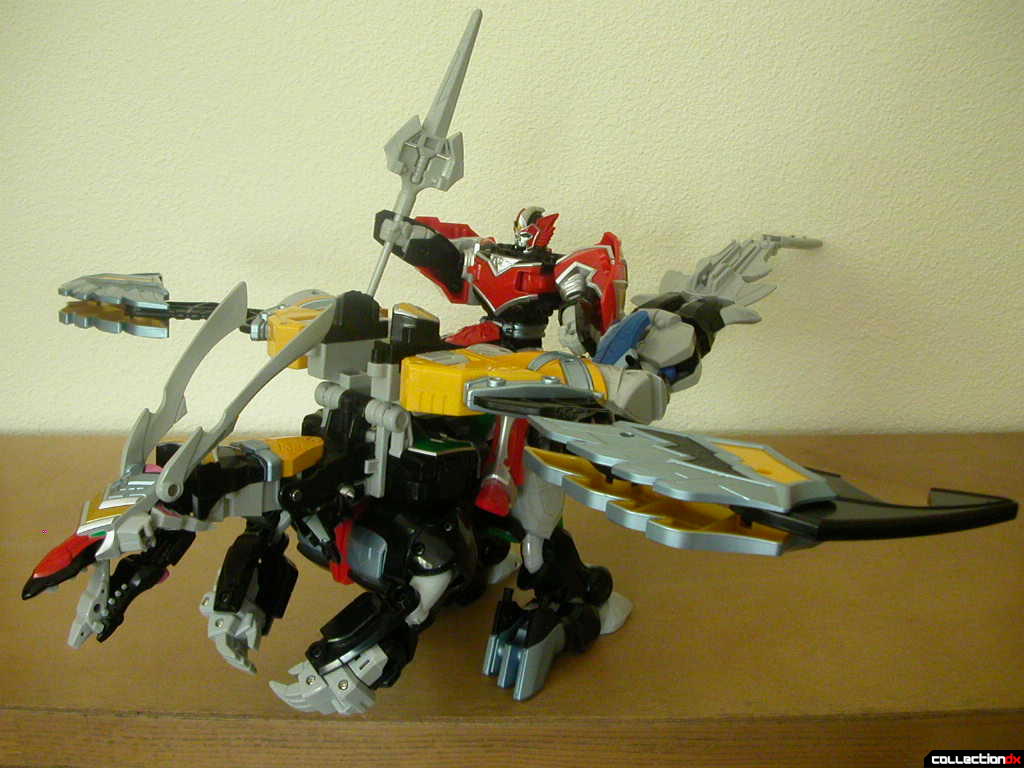 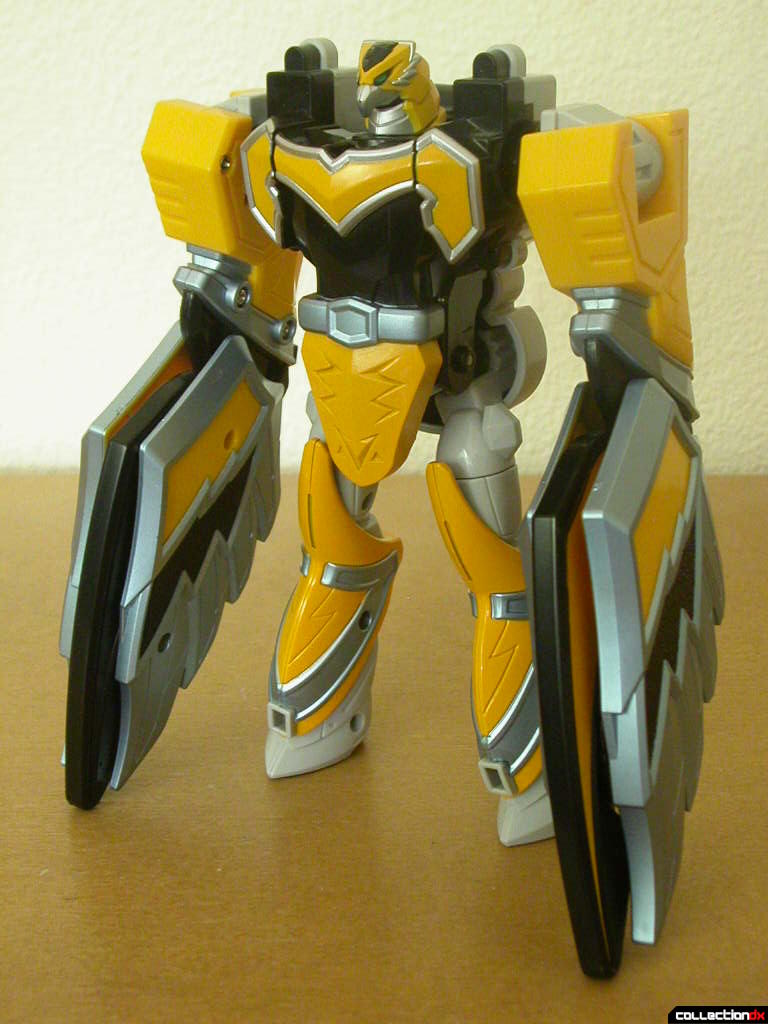 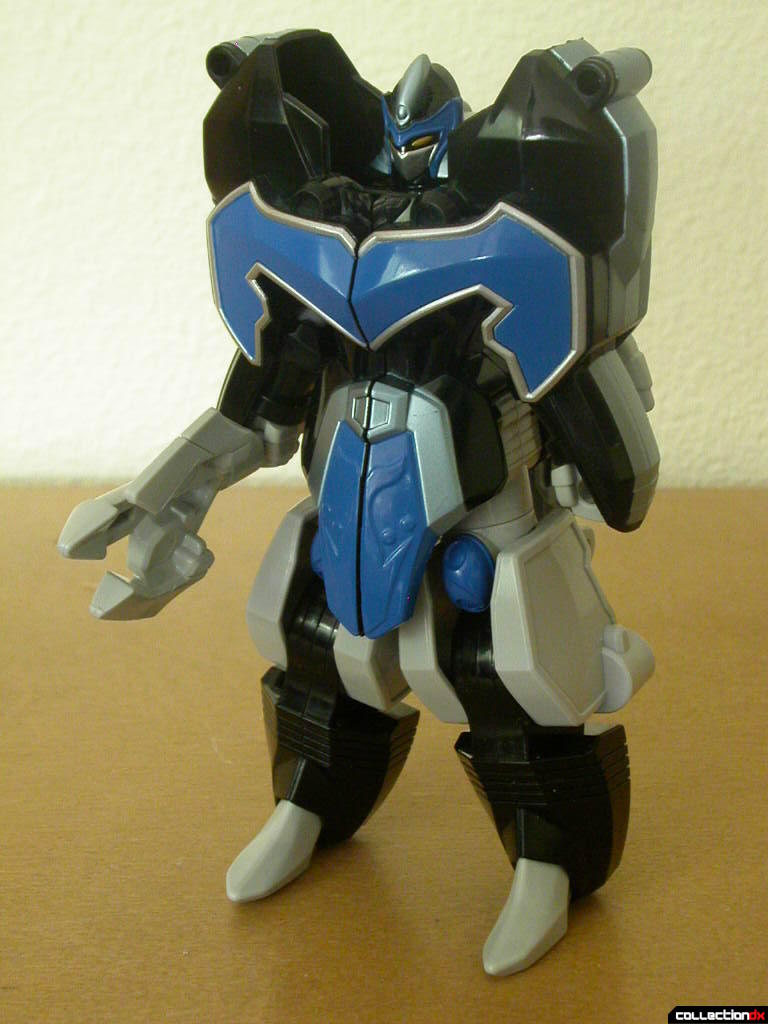 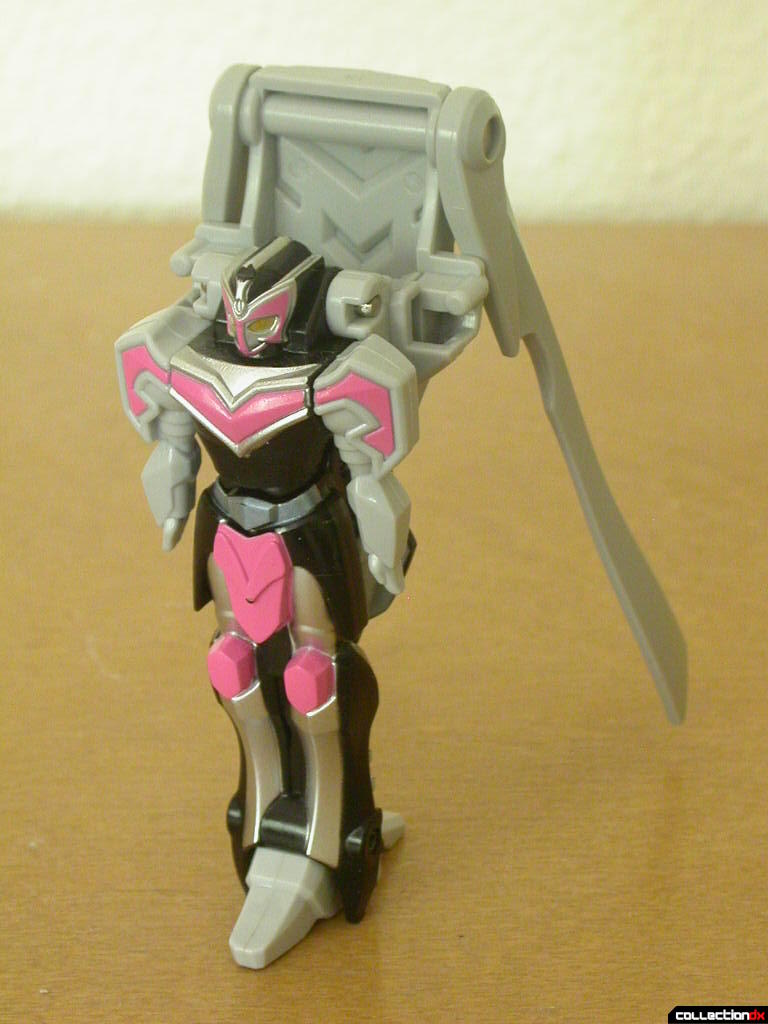 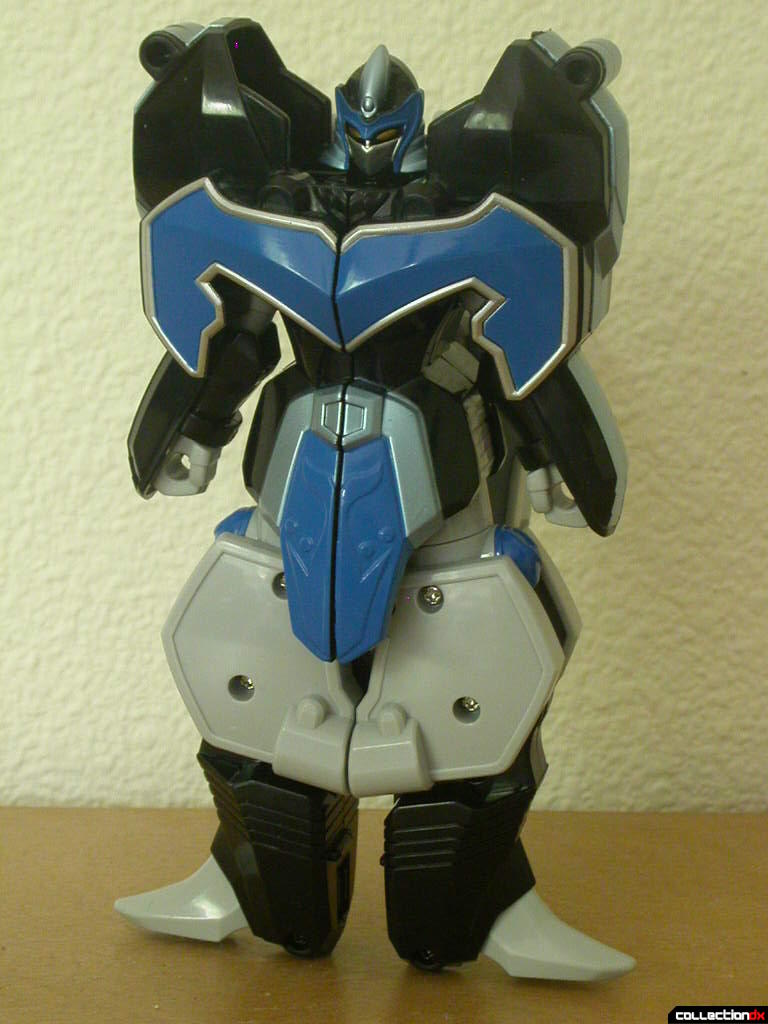 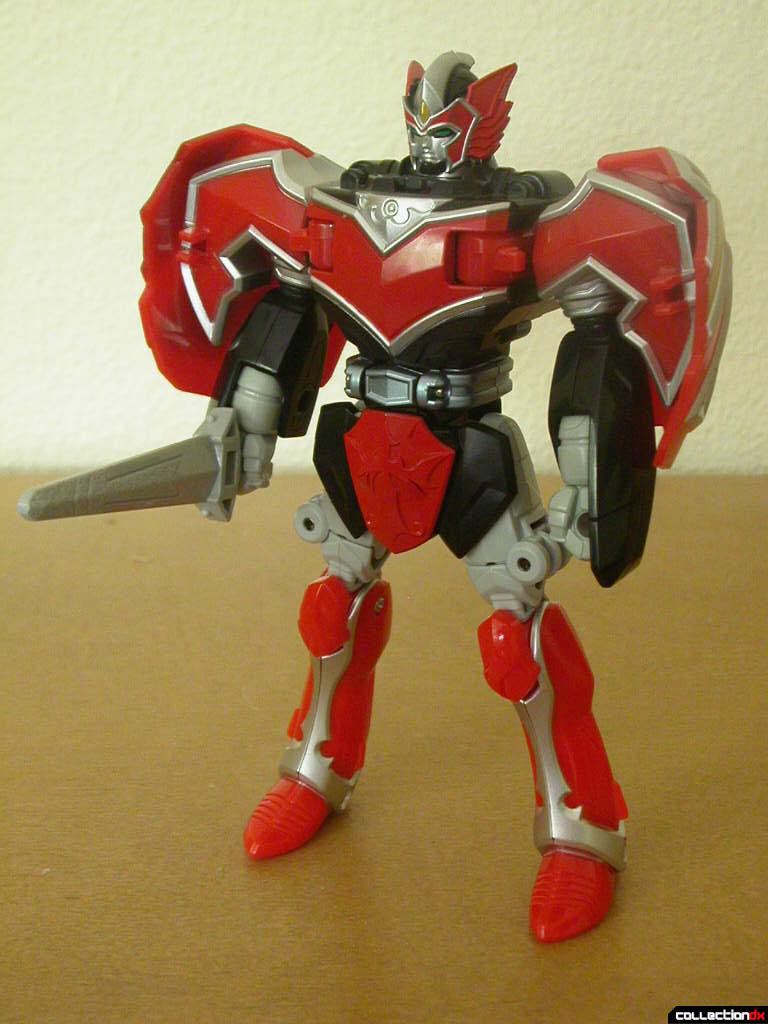 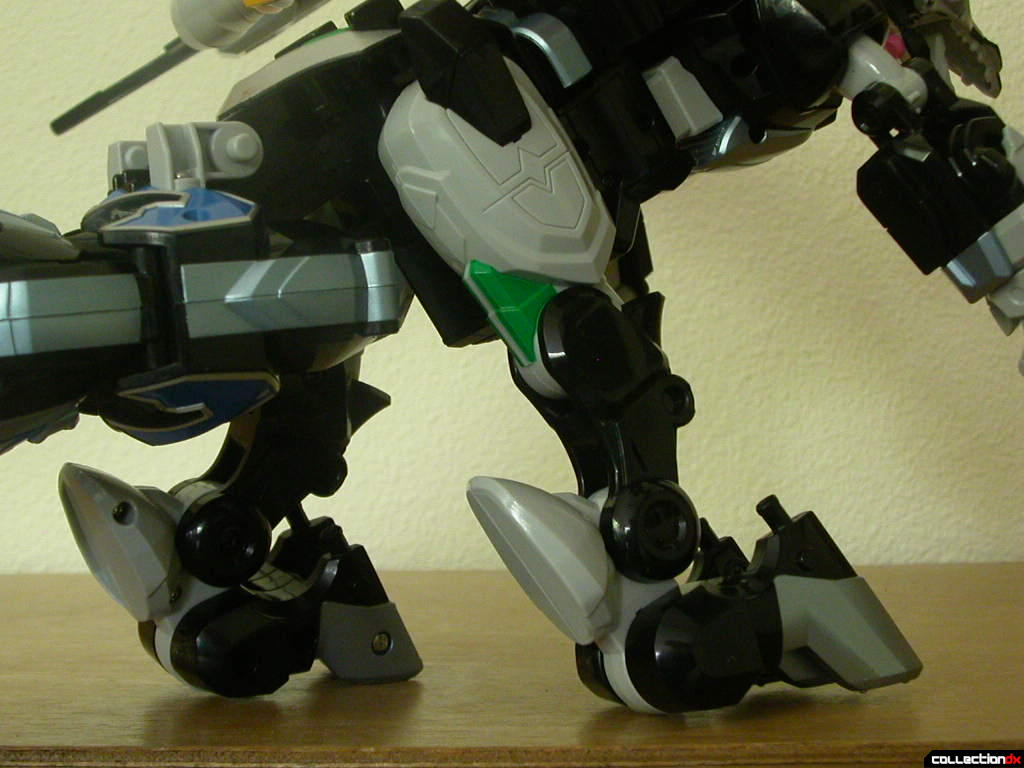 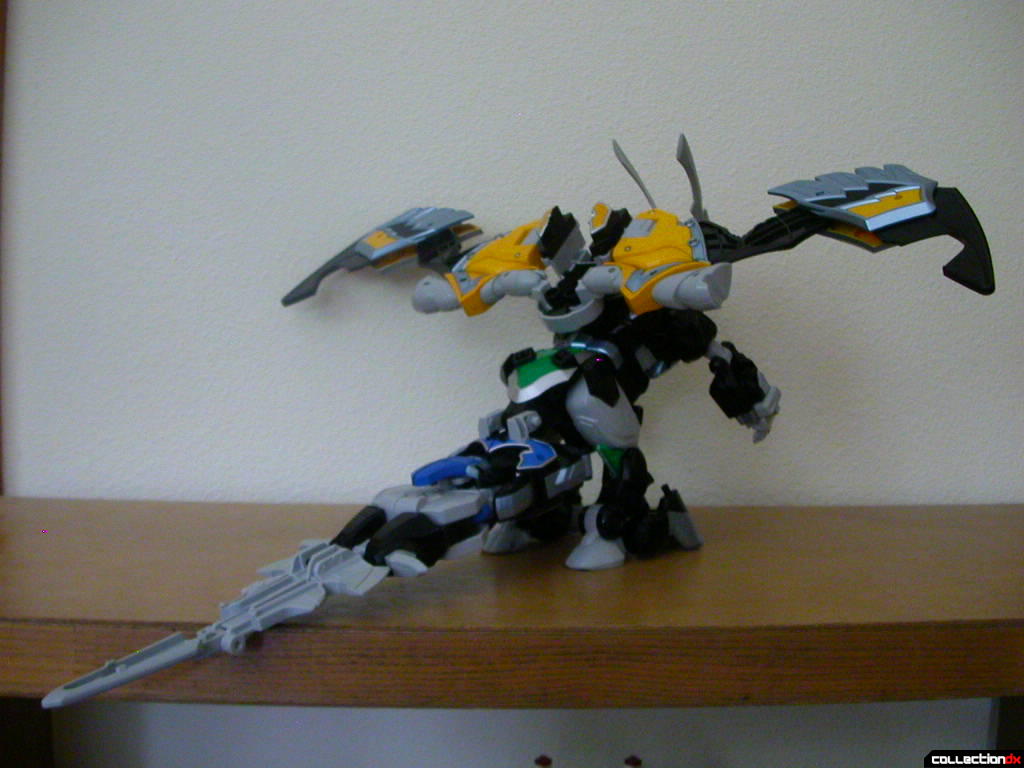 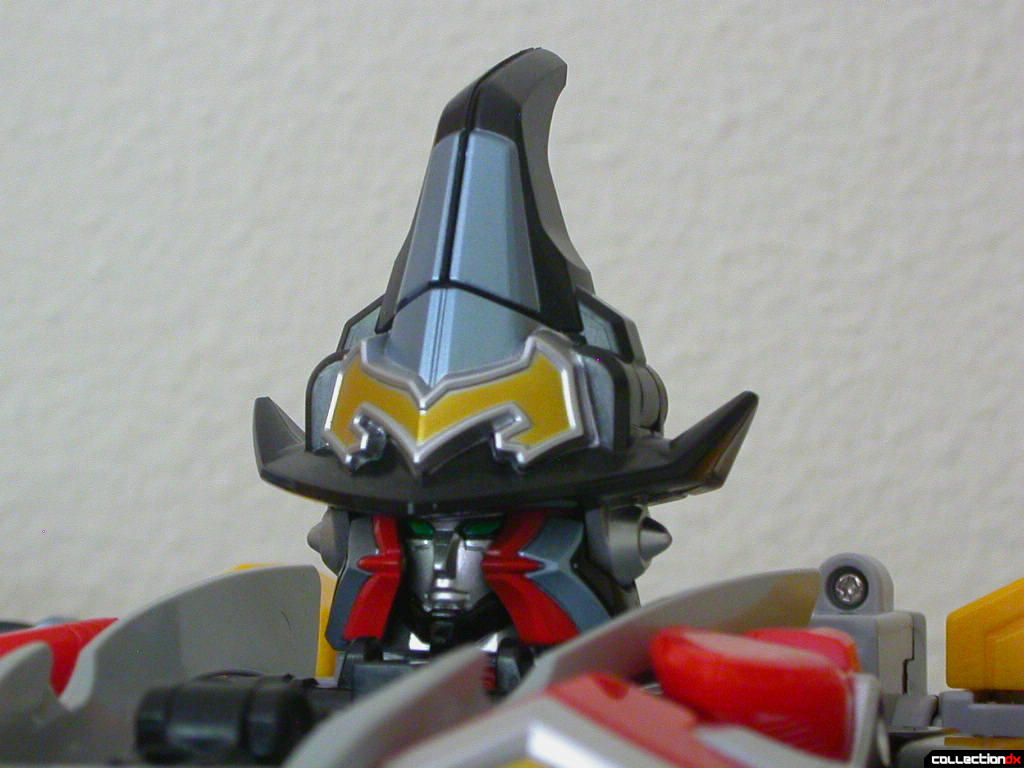 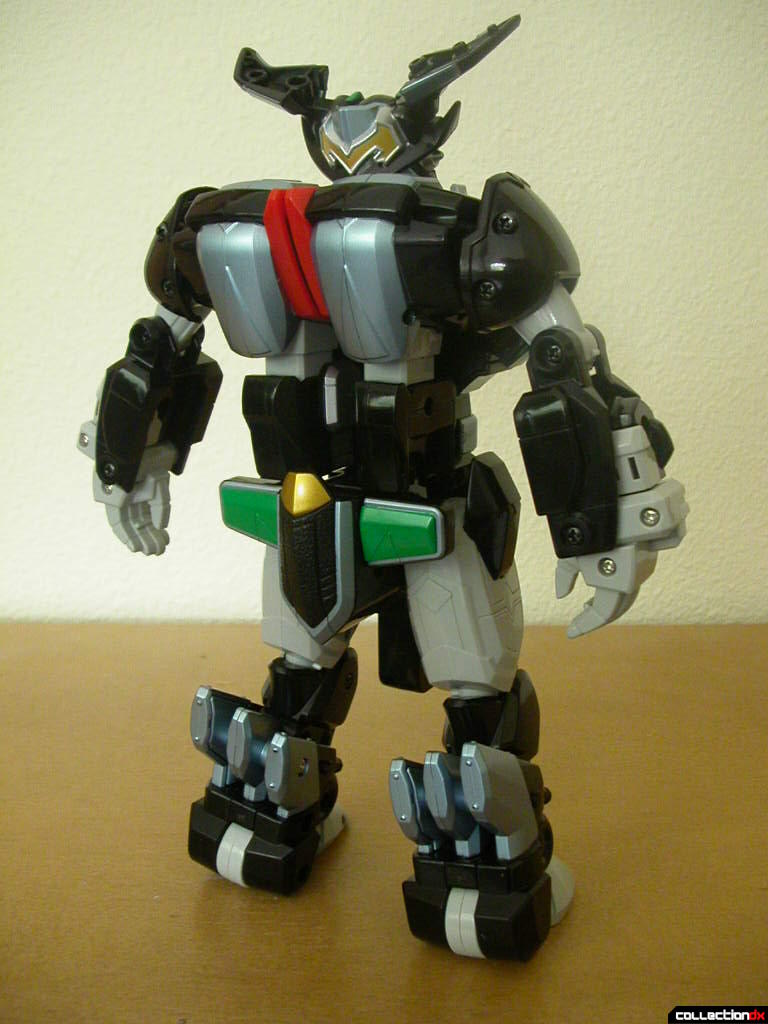 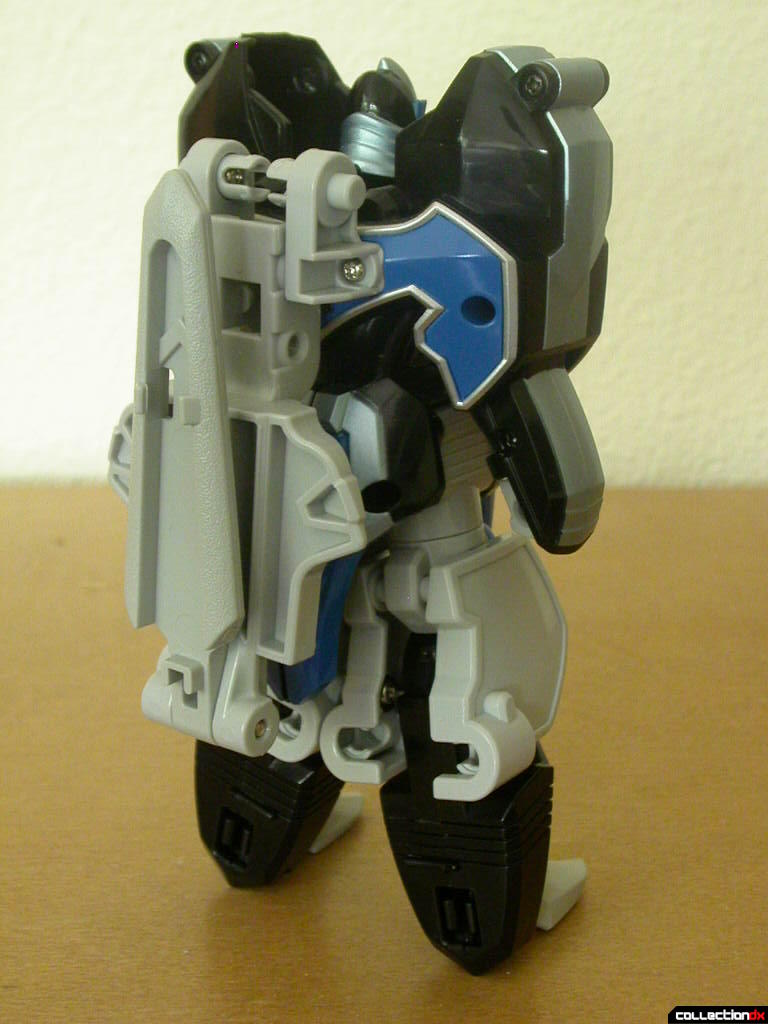 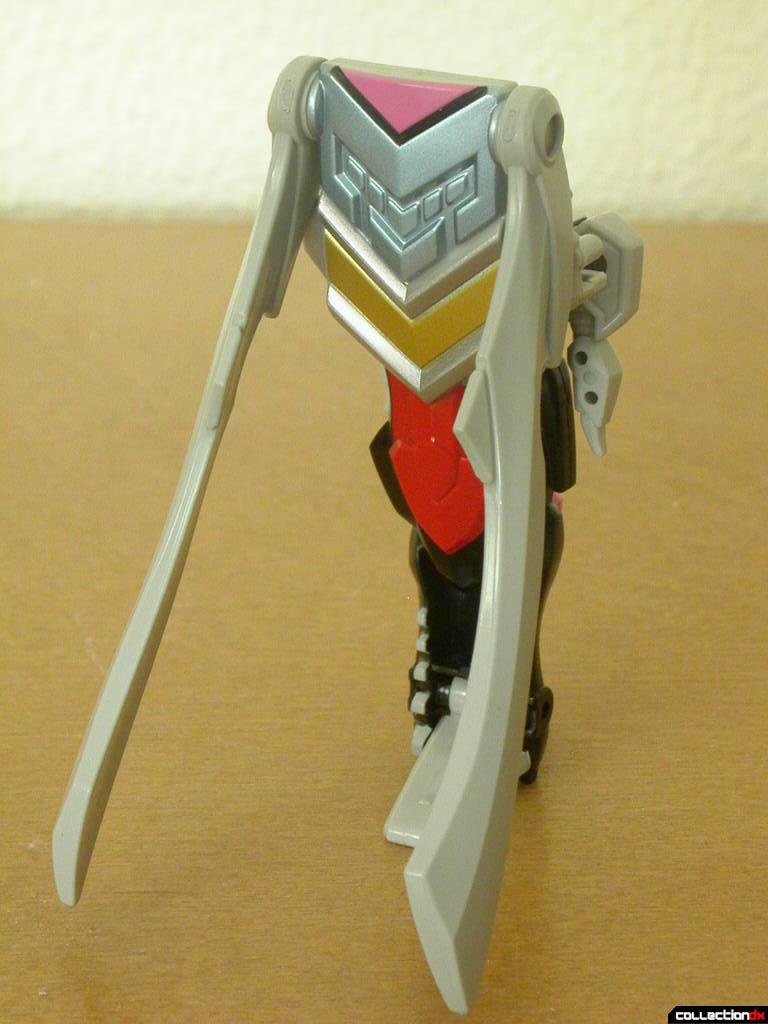 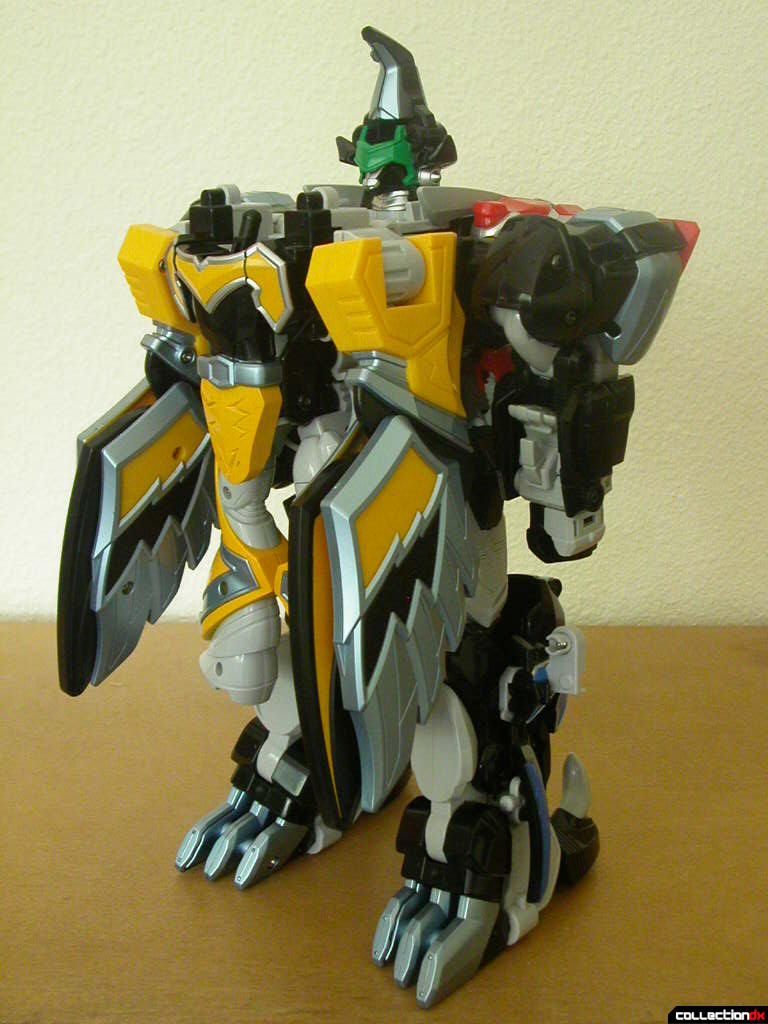 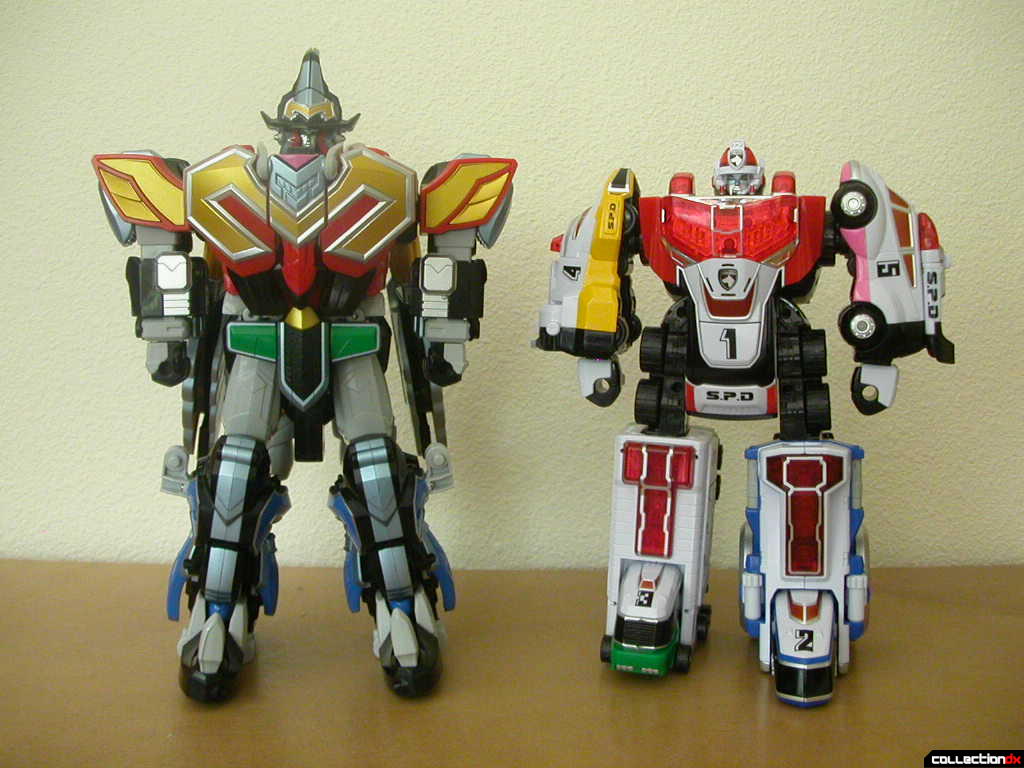 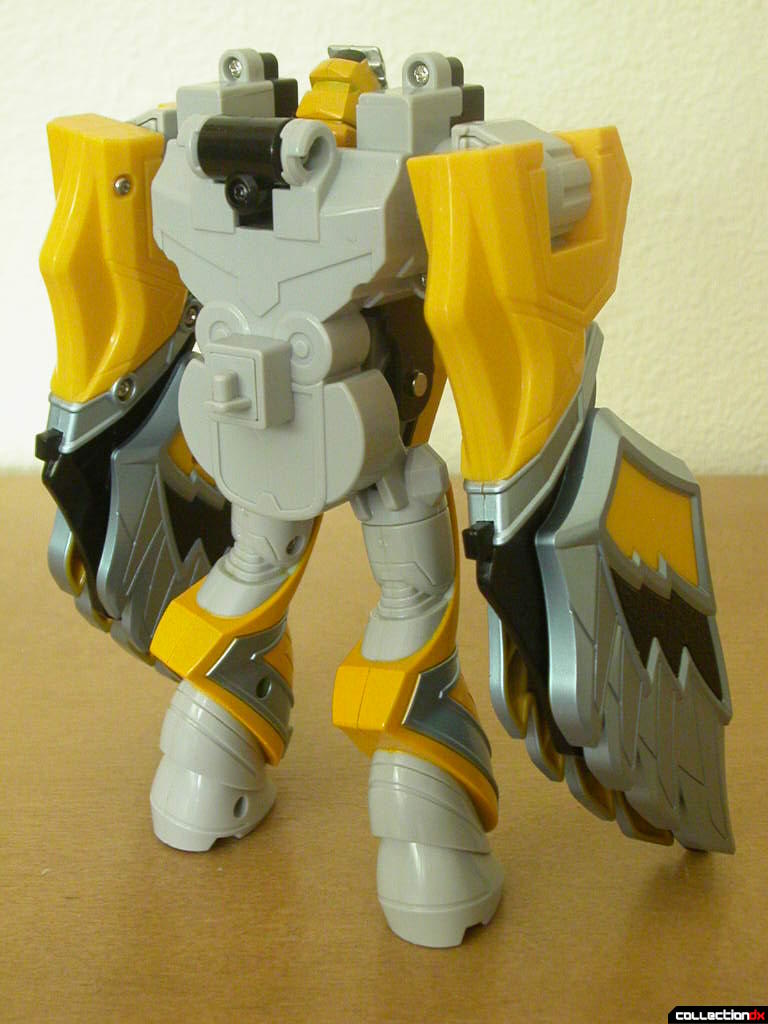 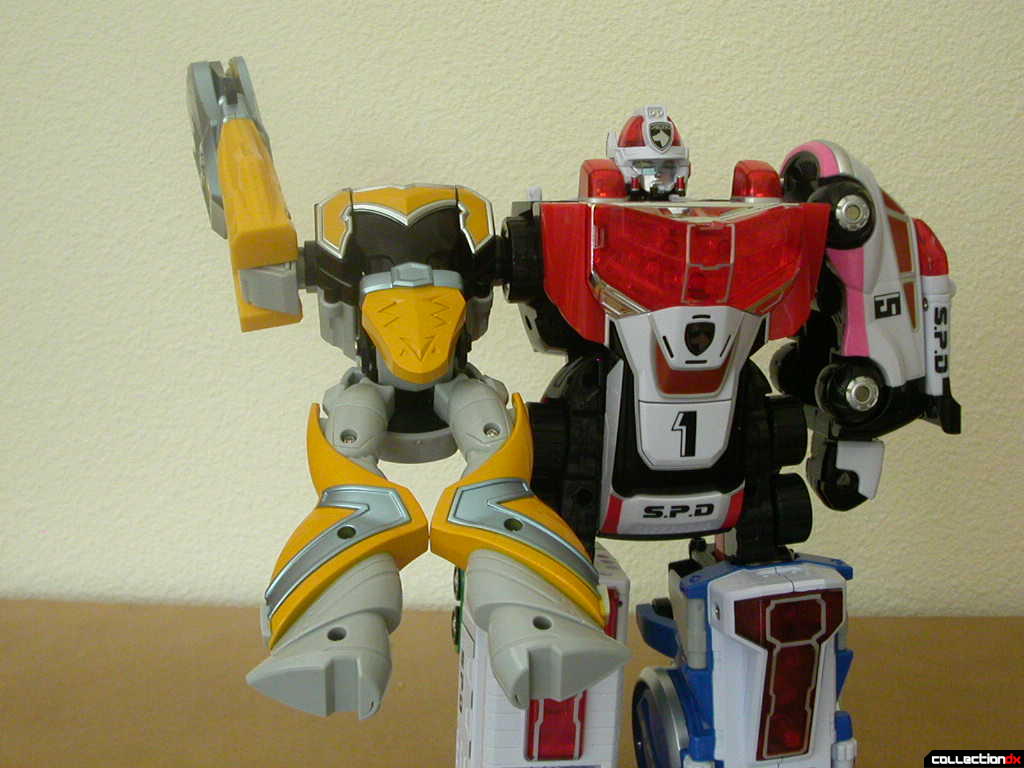 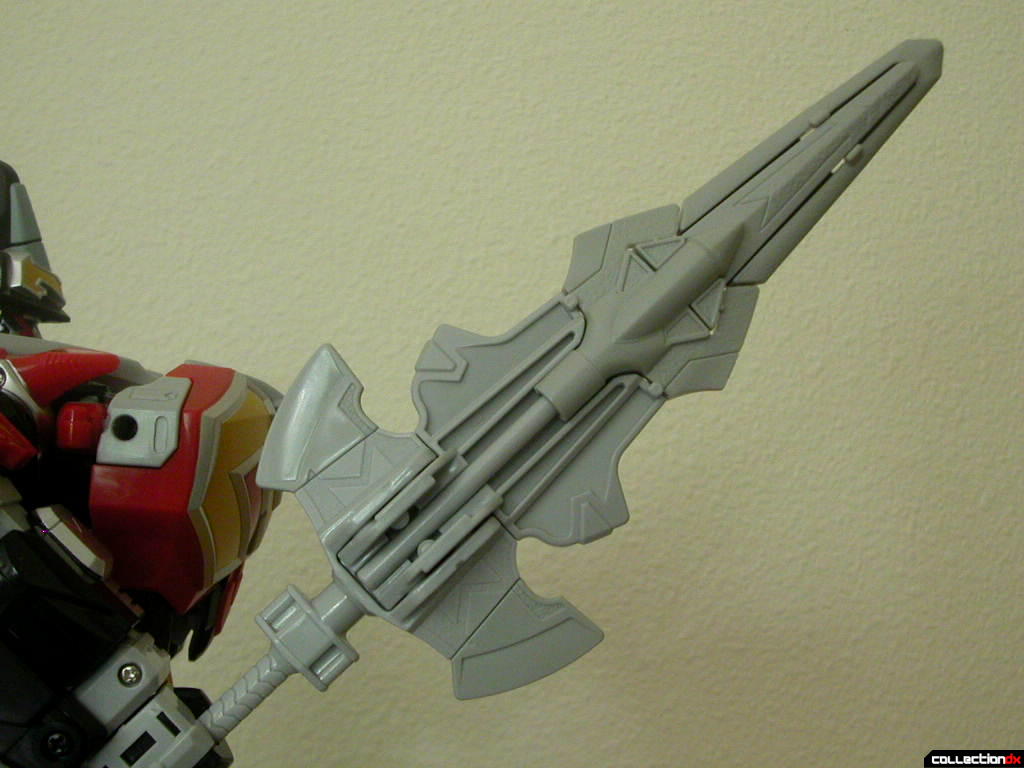 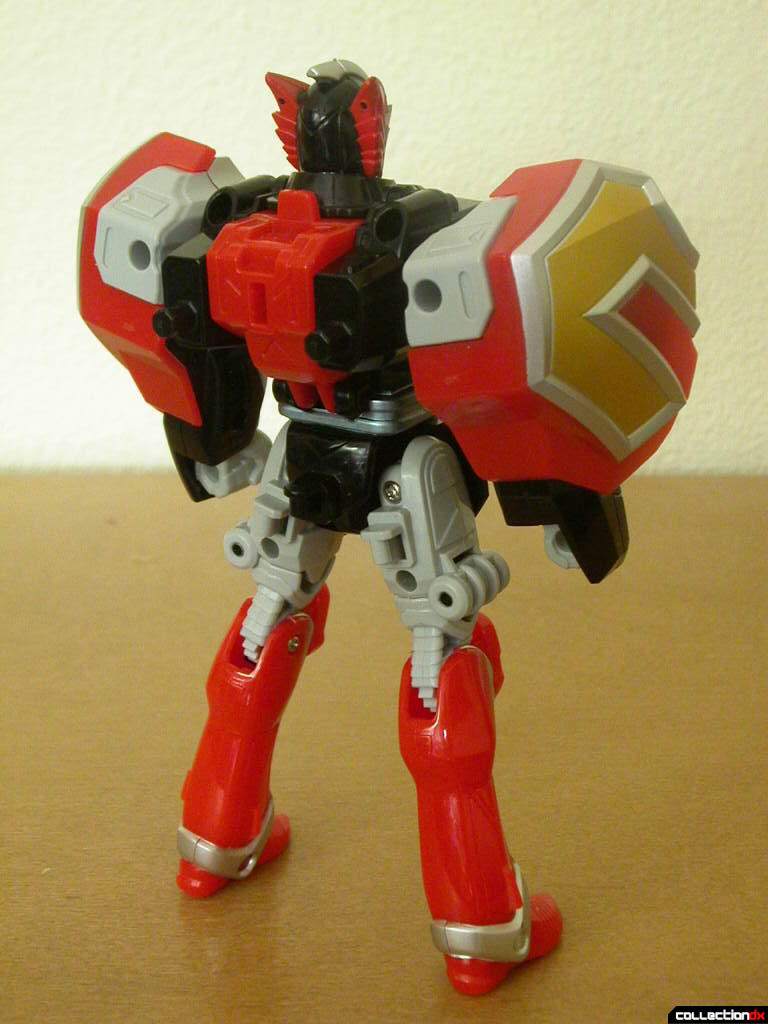 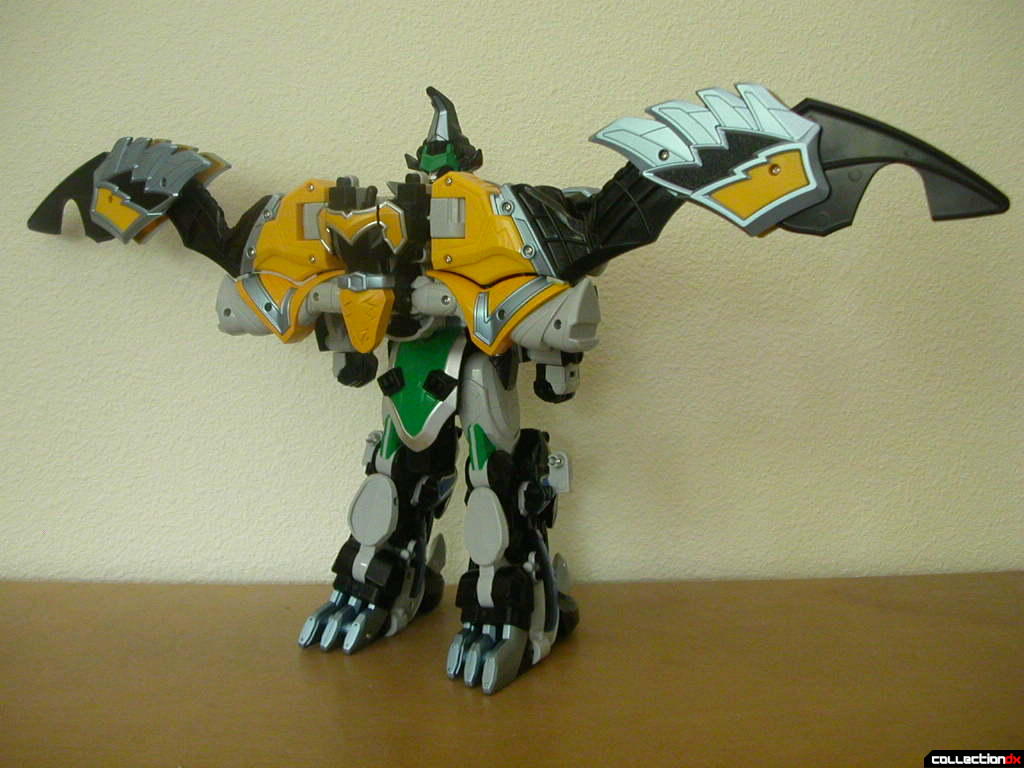 I just bought a DX MagiKing yesterday...it was a re-issue according to the toy supplier (and had a lower price since it was just a re-issue) and I like this toy more than the DX Dekaranger Robo right now.

Reissue? There was no reissue. Now, there was the Complete Edition DX MagiKing, which was a suped-up repaint, but it sold for, like, double the cost of the regular, and came in a fold-open book-like silver window box, and added the unique MagiBall that MagiFairy changed into for their combo attack.
God- I wish I could have gotten that one-!

In america and Japan there may not have been a reissue, but in England and Korea (and other places) they are behind in sentai series. Korea is known to run brave series toys long after the series has ended, so who knows if this user isnt in HK, Korea or a place like that where such practices are common?

I often feel that anything that was not produced by authorized manufacturers- regardless of how close it may seem- is a knock-off, and isn't considered "official-release" materials. So, anything that comes out of Korea, Taiwan, etc. that doesn't appear the same year and only through official channels I don't count.
For example: there was an all-silver/light gray DX Gao Hunter released the year after "GaoRanger" ended, but it wasn't sold in Japanese markets even though it was one of their products. So, is it officially part of the line, or is it a well made knock-off?

I guess this is just me but, if only the Perfect Edition contained some die-cast metal in it, then it might have justified the higher price of the toy even more, besides the fact that it's a great repaint of a toy.

Off-topic wise,I MIGHT be getting the DX DaiShogun this December since it's a better version of Engine-Oh.

Umm... There was no Deluxe-release for the Centaurus Wolf Megazord. You have to get the original DX Majin Gattai WolKaiser from "Mahou Sentai MagiRanger" if you want a transformable one.

It seems that the waist of Magi Fairy is quite weak...I have a DX MagiKing at home for 2 years and while I was playing with Magi Fairy a few months ago, the waist connector (the one that contains the hip and leg part) suddenly broke off...possibly from the strain of transforming it from figure to dragon head and back.

Looks like I'm the only one who encountered this problem, anyone else had a similar problem or otherwise?

and mine's the expensive pearl version...

That better be durable, given the price of that thing. Too bad it's not die-cast.

and it's around 3rd hand or so... and the magi-fairy's still ok but did you finesse your way through transformation or through brute force?

I always take good care of my collections and it's surprising that my Magi Fairy broke that way. I think the joints were already too weak through frequent transformations.

you actually made me scared about my magiking..., well how old is yours? my normal magiking has been pretty much fine as of the moment considering this is third to fourth hand loose

I have no problem with my MagiFairy.