Decepticon Hailstorm is a character making his debut in the 2011 Transformers toyline, although there was a generic Mini-Con-like character of the same name in the “Transformers Armada” video game in 2005. No information is available on him except for on the back of his packaging card:

“HAILSTORM is famous on CYBERTRON for his unique weapon designs, and ridiculous amount of firepower. What is less well known is the fact that he's terribly clumsy - which is why he avoids fights at all costs, despite his heavy armament. IRONHIDE may be excited to fight him, but HAILSTORM intends to fire his entire complement of missiles, and then escape under the cover of the explosions.”

Oddly, though released during the Hunt for the Decepticons promotion, Hailstorm does not have either the identifying sticker on the front of his packaging or a Coordinate Code on a slip of paper inside.

Hailstorm’s vehicle mode is a generic Multiple Launch Rocket System (MLRS) tank on tractor treads, though it may possibly be a buffed-up version of the United States’ M270.

There are four small light gray ABS wheels under the tractor treads which turn freely. The cockpit is open-air with no transparent plastic to represent windows.

The boxy rocket launcher on the back can tilt up to almost 90-degrees, and swivel 90-degrees to either side. All eight red missiles can be fired by pressing on the back of each one individually- the harder you press, the farther they travel, but average range on a flat surface appears to be over a foot!

Though not part of the instructions, Hailstorm’s head is on a bar with a ball joint as part of his transformation that can be raised or lowered depending on your preference. (I prefer to have his head in the lowered position, even though this eliminates the neck’s articulation.)

Despite having a ball joint in each hip, there is an additional swivel joint there as well which greatly increases flexibility for posing!
While molded individually, his fingers cannot move.
While the missile launchers cannot be repositioned in robot mode, the projectiles themselves can still be fired, with slightly-increased range.

Not available as part of this set, there are a pair of raised bars along the outer-top corners of each rocket launcher. This way, accessories and weapons from other HftD sets- such as Deluxe-class Decepticon Darkmount- can be affixed to Hailstorm! (His bio does mention he has “unique weapon designs”, so this makes sense in a way…)

I gotta say it right up front- this guy floats the hell out of my boat! First of all, he’s a missile mech, which I love because you can easily overpower opponents, and you can keep your distance without the grittiness of close-combat. (It’s all about fire-n-forget, baby.)
The white paint in vehicle mode may throw some off, but it just fits in so well with the dark forest green and black that I can’t complain. The flexibility in the missile launcher is wonderful! There is no direction this thing won’t point… except straight forward for storage. And it also avoids the stumbling block that turned a lot of people off to the 2007 Voyager-class Decepticon Starscream set, which had six spring-powered missiles that were very prone to going off unexpectedly. By making all the missiles finger-powered, you avoid that problem altogether and save a lot of space- and thus money- on the toy.

I can say nothing more than “The transformation is amazing, fun, engaging, and easy”. What more can you ask for from these toys than that!?

It’s a shame this guy is so worried about keeping his shell scratch-free (which I can completely sympathize with), because he’s also got all the brutal chunky armor and thick limbs that goes along with a muscle-bot. Just like a lot of Bayformers, he has a deformed humanoid shape, spotting a squat appearance with longer upper arms, wide torso, and stumpy legs. But, like any decent Bayformer, he has gobs of awesome surface detail. Oh, and he has a bad-ass head to match- like he’s making himself look scary just to scare Autobots off so he doesn’t have to fight them. (Brilliant. That is why his Intelligence stat is a 9/10.) And, oh yeah, he has a set of massive missile launchers sitting on each shoulder. (Take that, Soundwave!)
Though certainly not misplaced as it is now, I kinda wish the leftover framework from the missile launcher had been dealt with a little differently by collapsing down some more. It adds bulk, but I’m not sure how satisfying it is. Also, the ankles aren’t as flexible as I would like even though they can move a little bit. And why again can’t those hands open up???

You know what? I think I have finally found the answer to that age-old question, “If you were a Transformer, which one would you be?” I love this guy so much I wanna- I wanna… I wanna make him my mascot! (Huh? Wut?) This is Deluxe-class Decepticon Hailstorm (does anyone else think that’s the kid-friendly way of saying “Hellstorm”?), it is one of the most impressive toys I have EVER laid hand or eye upon, and it proves once again that some of the smaller pieces in my collection are often the most fun. Top-level recommendation!

This toy was repainted [light blue & dark gray] as Autobot Mindset, also released during the Hunt for the Decepticons toy line. 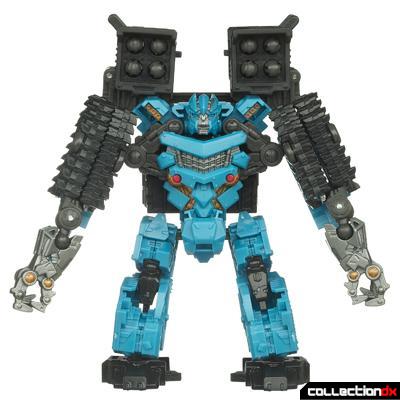 Great review EVA, I also picked this one up even though Im more into the classics style TF's and I have to say I was pretty impressed too. I saw all those missiles and thought "AWESOME". I was kinda thinking they were all spring loaded but hey at least they still "shoot" . Had a hell of a time putting into tank mode from robot mode without instructions a month after buying him. I think I got close though.

How do you feel about mindset? I havent got that one yet, I usually DO buy repaints but havent picked that one up.

Lemme just say I'm glad I got this guy first, because Mindset's color scheme is atrocious!

Yeah, pulling up on the head/collarbones and putting the legs into place in vehicle mode are the most taxing part of the trans. for me, but I'm not worried about it.

Only thing that might be a turn-off for some might be how small his lower arms are compared to his upper arms. TRUKK NOT MUNKY?

Come to think of it, other than Bayformers Screamer 2007 and Ironhide, what's the last multi-missile-launching bot we had?

I stopped really paying attention to TFs after the second movie since the robot modes were getting pretty lame,like the bike robots or the steam shovel who turned into a figure eight with a face,but the TF reviews on here as of late make me think I'm missing out.

You sound like one of those Trans-fans who can't get over the fact that there are non-humanoid TFs in Bayformers...

By chance, did you listen to Vlog #2 on my YouTube channel?

I've got three HftD toys so far (the third is in post-production as I type this), and all three of them are very awesome. There's maybe half a dozen more I'm interested in getting from the line.

I wouldn't say I "can't get over it," I just don't buy things I don't want,so I didn't buy a toy that transforms from "construction vehicle" to "broken construction vehicle." They were fine in the movie,but not as something I want to put up on my shelf.

I also got this one and I love it, lots of people complain about the size, it's barelly taller than any Scout Class figure, but being that short adds a lot of bulkiness to the figure (and GOD knows that's my fetish!). Plus I really like those camo paint apps.

Is it me or Hailstorm looks like a bad-ass robo-gorilla with bad-ass rockets on its shoulders?

I agree with everything you said in your comment. Any small TF is usually capable of being represented at a larger scale. If Hailstorm had been no larger than Voyager-class, and been as awesome, I would have been very satisfied.

Being bulky may not be a result of being a Scout-class figure, that's just how the character appears and the alt mode they chose. I will say, though, that this alt mode looks a lot better than TFCybertron's Scattorshot was (damn, missed my chance to get him AND Dropshot).

Too bad the robot mode a bit "gorilla" like...

Hate to say it, but Hailstorm and Mindset just get a big 'meh' from me. I don't think there's necessarily anything horribly bad about this toy, but nothing that really draws me to it...

Tomahawk and Terradive are both awesome though. Since when in recent years has there been another Transformer armed with a trident? And Terradive can happily hold it in both hands at the same time! Kind of regret not getting the Takara Sidearm Sideswipe though...that blue one in the DOTM toyline may have to do.

Any chance of seeing a review of Terradive, if you don't mind me asking?

I missed getting Terradive because I waited too long to get him. I haven't seen him in weeks. Same with Perceptor, Skystalker, and Jazz. Q_Q

I never saw Skystalker's wave at all in stores. No Divebomb, no Scattorshot, no Skystalker. I could go for Sunspot I suppose, but that toy's colors don't look so good with Mindwipe. Perceptor is okay, though his back may really annoy you in how hard it is to get it to tab together. Can't see what's going on in there since his shoulders are connected to it too, and moving his shoulders once it seems locked in is enough to cause it to become undone! Still, that's pretty much his greatest flaw, and is decent otherwise. Jazz is my favorite out of the RTS Deluxe figures. He, Windcharger, and Lugnut are THE ones to not pass up in the line. Lugnut's not quite as clean as his Animated counterpart, but still a cool made-up-bomber jet.

I'm prepared to jump on Universe Lugnut as soon as I see him; he looks bad ass!