With the Mazinger GX-01R in hand, you can easily be amazed by his solid look, plus the metallic feeling of the upper arms/legs. His face sculpture is indeed vivid and nice looking, however it is the face designed for the anime of Great Mazinger instead of original Mazinger animation, which make him, doesn't look that much anime accurate this way. 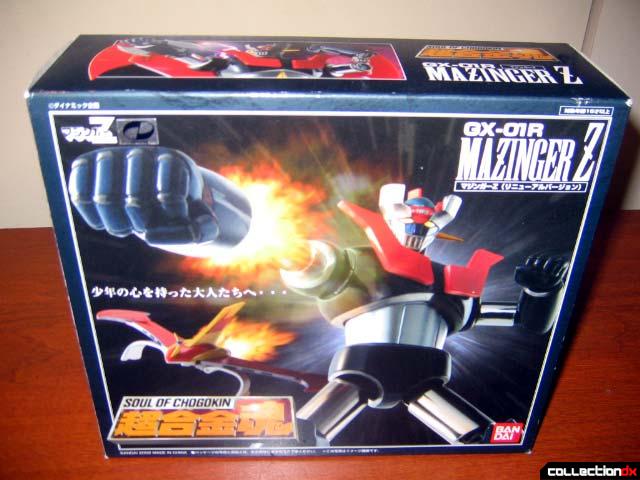 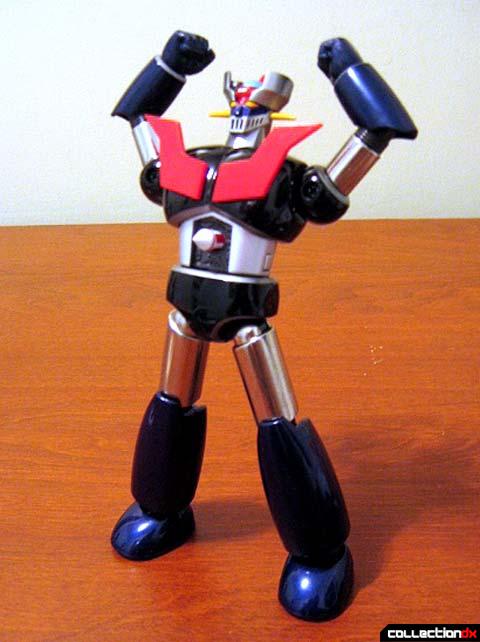 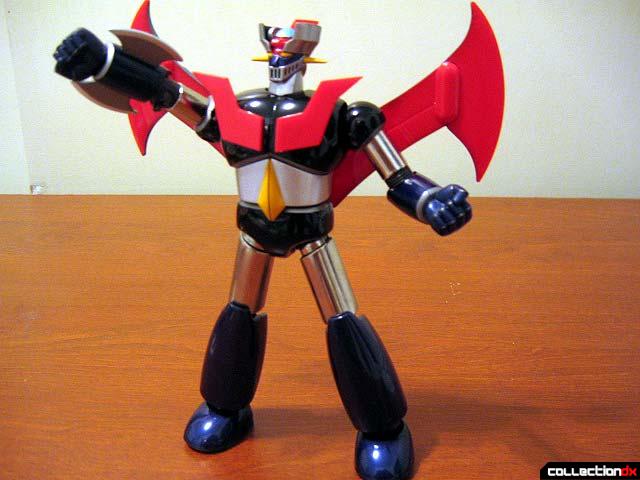 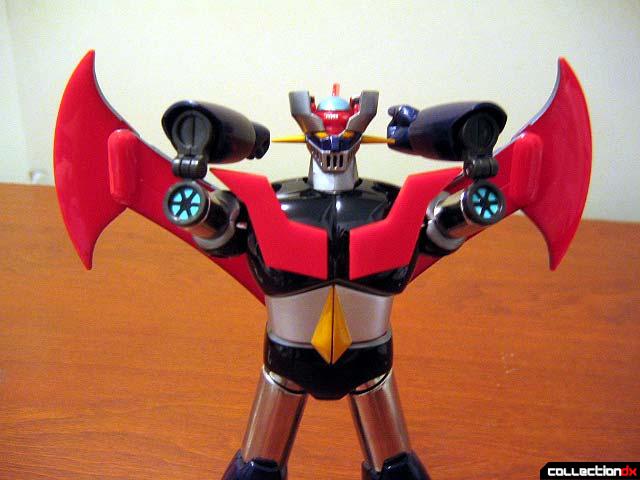 He comes with three different kinds of arms, one with blades, one with opening drill missile, and regular arms. He also has four kinds of hands, two kinds are fists, and one kind are regular hands, and one set with holes that can hold swords. (Which are not included in this set) Another great feature about GX-01R is that his missiles for the stomach actually fire! You can take off the stomach plate and put the missile in, when press the hidden bottom at his right waist, boom!! 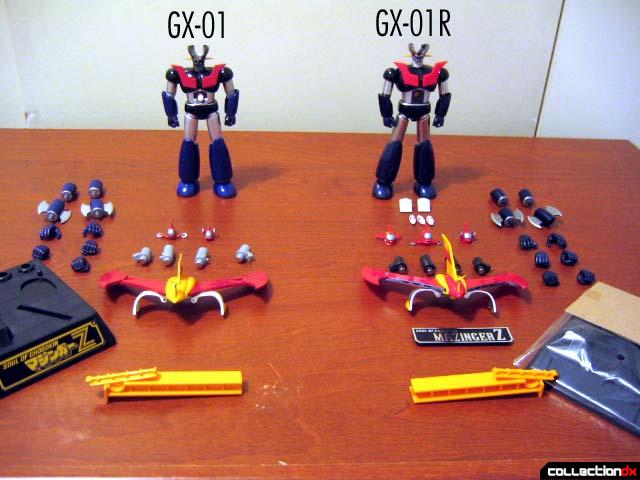 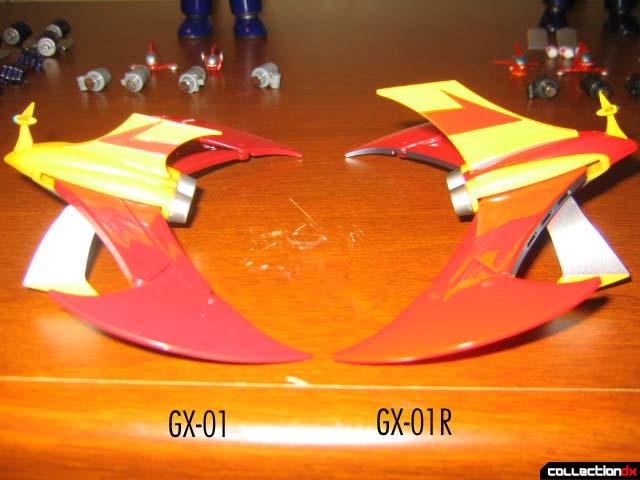 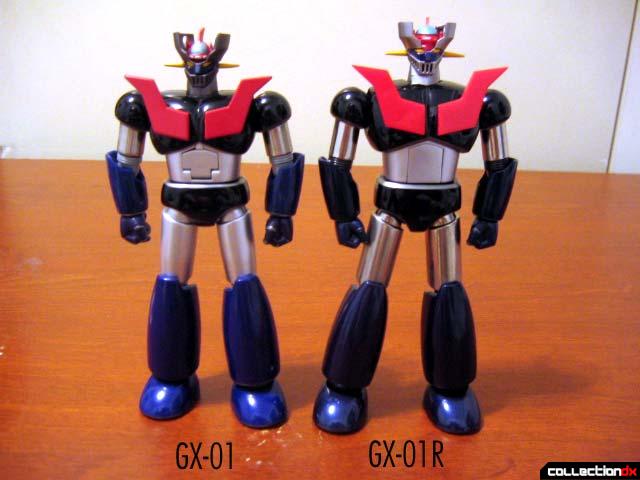 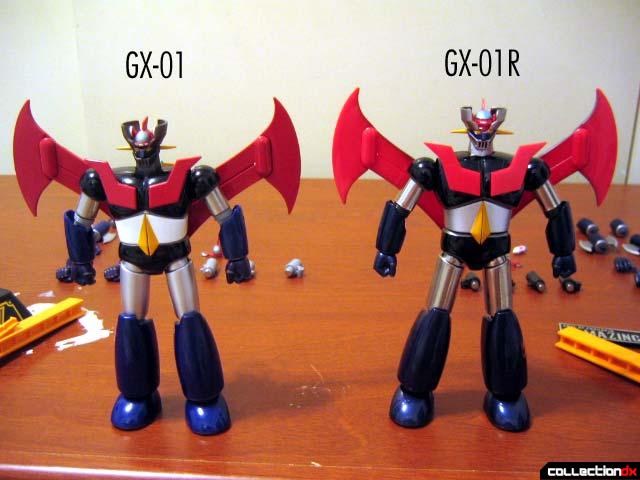 Jetscrander is another key feature of this set. The wings can be adjusted up and down freely, and it can be attached to his waist tightly. Also included with the set is a plastic stand, which can hold up everything, (except the box itself, lol) and three tiny red Hover Pileders. One of them can be put on to his head.

The plastic chest plates looks a little flimsy. (This also happen to GX-02 and GX-23) Also, the head looks ugly in compare with the original GX-01.

Other than the face, there's one key improvement which make its price 1000yen higher than the original GX-01: the GX-01R is obviously much taller than GX-01! The length of their bodies and the lower part of the legs are the same, but GX-01R has longer upper legs and upper arms.

As we can tell from the picture, the accessories of GX-01R are a lot more than GX-01. GX-01R has 3 missiles, two stomach plates, 3 Hover Pileders (GX-01 has 2), and one of the most important parts, the Jet scrander (Red wing attached to its back) is ASSEMBLED (for GX-01, you need to cut off the trees and build it up, which makes the value of built set went down a lot)!

Further differences can be found from the picture, the tail of Jet scrander of GX-01R is longer than GX-01, plus when you put the two jets onto their bodies, the GX-01 has a more "bulky" look in comparison with GX-01R.

In conclusion, GX-01R is closer to what we would call a "piece of art" than GX-01. It doesn't require any kind of assembly and looks better over all. In my opinion, this toy is one of the must have for robot collectors. I will rate it 85 out of 100.

Editors note: The R stands for "Renewal version". The idea behind the GX-01R was to fix quality control errors with the original GX-01, and to increase the hight so It would look in proportion to the Mazinger ladies and Great Mazinga. The GX-02R was released in October 2002 with a retail price of Â¥7140.