Fans of Marvel's Transformers comics will remember him as Straxus, but for US consumption, he has been renamed Darkmount due to licensing issues. Darkmount is actually the name of Straxus' fortress. For the sake of the review, we will refer to him as Darkmount since that is his name for Hasbro's Generations release.

Darkmount comes packed in his vehicle form which is a tank-like vehicle with tank treads in the rear with standard wheels in the front. It's actually quite nice. The guns and launchers on the top of the vehicle can actually come off and clip onto other spots of the figure...or other Generations figures! Very cool indeed. 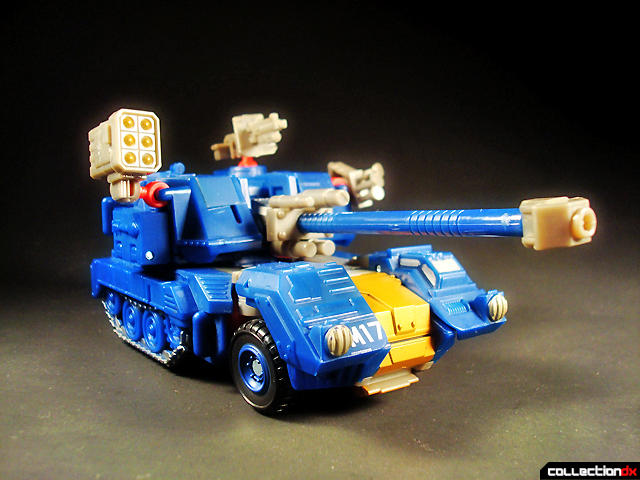 From the rear view we see more of the vehicle detail. Nothing quite gives away the fact that there is a robot lurking in this toy. 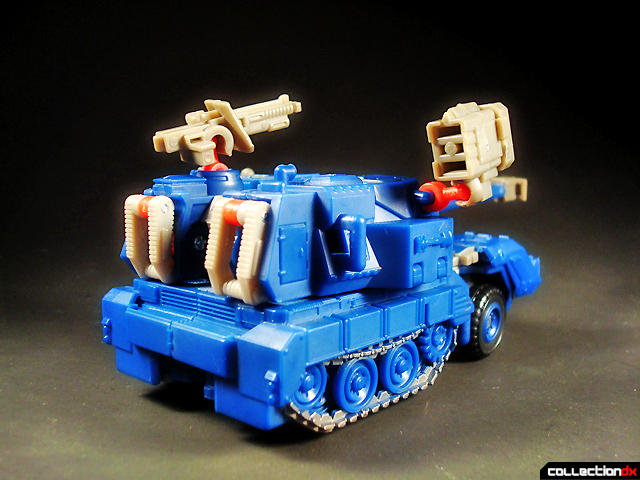 It's not until we take a look at the underside of the vehicle that wee see what is really going on. 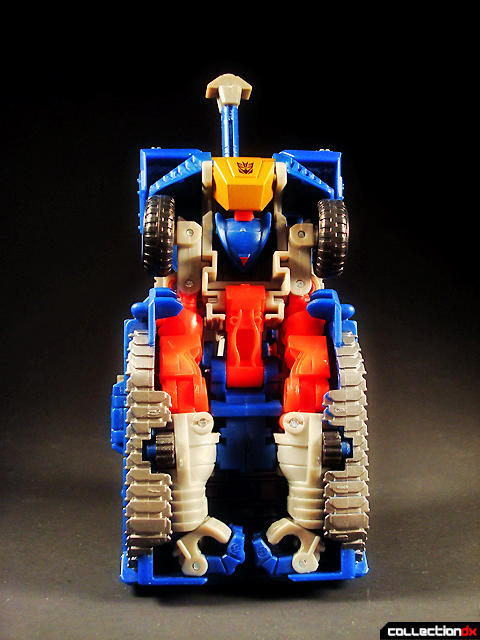 Once we start pulling, snapping, twisting and flipping parts around, we are left with this. OK so it's not so exciting yet as I have him in a lazy neutral pose. Notice the vehicles launcher is now clipped on his shoulder and the guns are clipped on his legs. Some will agree or disagree that he borders on the "Bayverse" movie look. 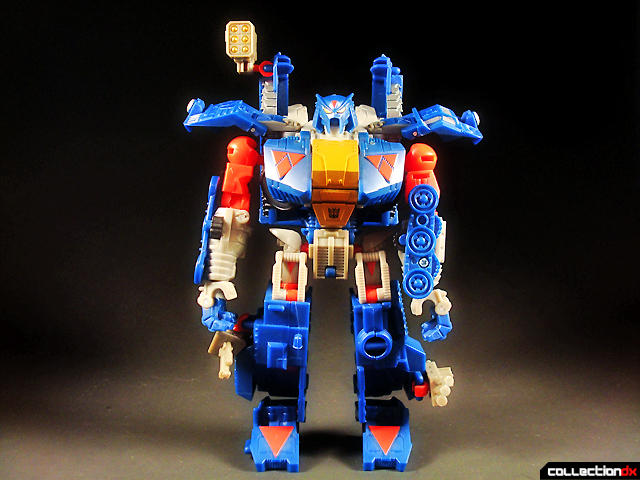 From the rear you will see some leftovers from the transformation, but nothing I would consider messy. Some may or may not like the look of the huge "backpack" 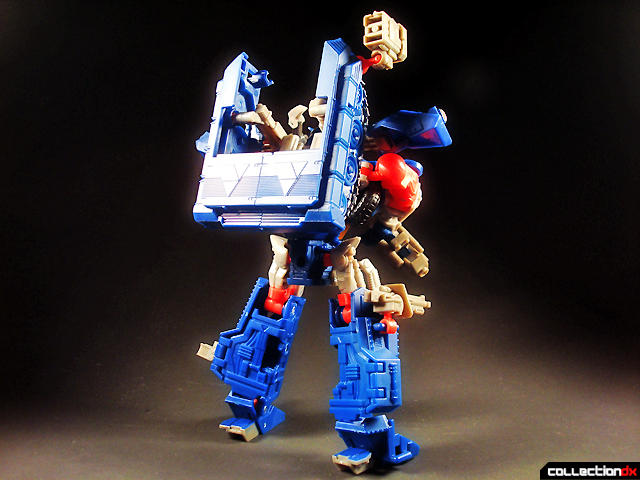 So let's give him a bit of life and a weapon. The weapon he's holding is actually the cannon barrel from his vehicle form. 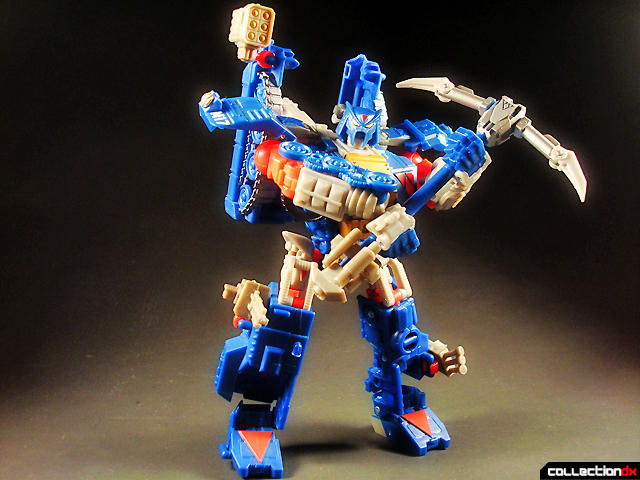 The ends of the weapon/barrel swing out to form the weapon.

Up close we get a good look at his face which in my opinion does not conjure thoughts of the Transformers I grew up to know and love. It's faithful to the comics but it's not my cup of tea. 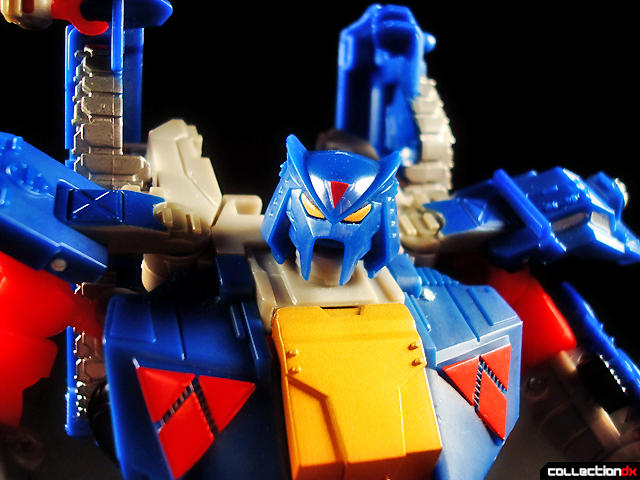 As I always say, I would like to see an old fashioned purple logo on these new classic style figures, but these dull one color insignias will have to do. This is where repro decals save the day.

Anyone notice the M17 print on his shoulders? I've read that this may be a nod to the Marvel Transformers comic #17 in which he first appeared. Feel free to comment on this if you are more familiar with this character. 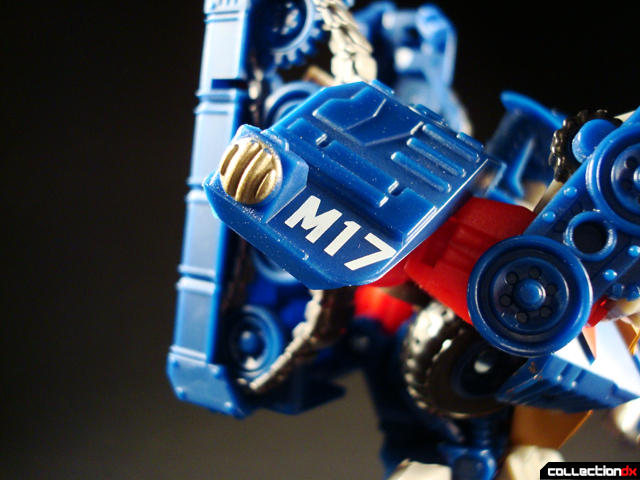 Here we can see again how the guns and launchers can be clipped onto other parts of the figure. It uses simple C-shaped clips to accomplish this. There are various mounting points on Darkmount to mount these to. 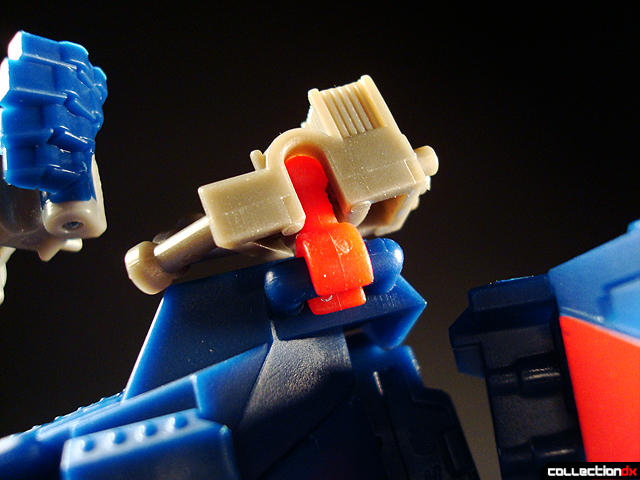 Before we finish up, I wanted to show you his third mode which is a cannon of some sort. Not a big fan of this mode at all but multiple alternate modes are always welcome. 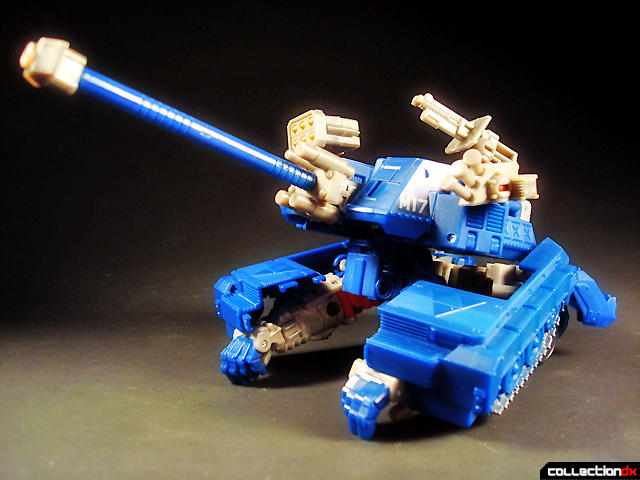 Paint apps are clean although there are some spots that seem like they should have been painted to add more detail- particularly the wheels. The transformation is fun, both main alternate modes look good and it's a welcome addition to any Transformers collection. If you absolutely must have a full blown actual, legally named Straxus, you'll have to save up a bit more for Takara's United Straxus which is this same mold with some slight color differences. If you fancy a color other than blue for this figure, then Generations Skullgrin may suffice as he is the same mold with a light gray color scheme and different head sculpt. 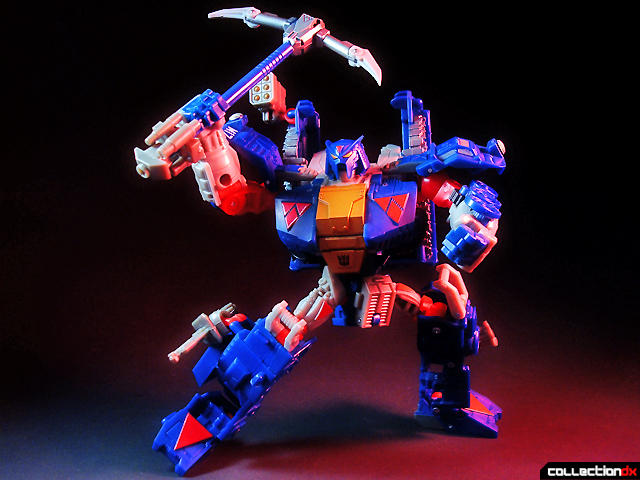 7 comments posted
If I remember...

Was his role the same as cartoon Shockwave? Taking care of Cybertron while Megatron on Earth?

To be honest, I am not sure but I think you may be right. I've been trying to get more info on him but from what I've read, it may be along those lines.

Shockwave was janitor of an empty Cybertron. Straxus was the brutal dictator of a Cybertron full of miserable wretches that he enjoyed tossing into the Smelting Pool, a superheated vat of liquid metal.

I picked up his repaint/retool Skullgrin, and he is my favorite Deluxe in the past year. Fantastically complex for the class, and he looks great in both "full" modes. They have finally solved the puzzle of how to put a revolving "tank" turret into a Transformer without giving it crazy proportions (Gobot Destroyer, Warpath) or copping out and making the turret removable or just kibble in robot mode. What's the trick to the turret? If you can't tell from the pictures, buy him and you'll see.

Compared to Straxus, Skullgrin has is somewhat more believable gray color in vehicle mode with only small bits of red showing, while in robot mode he is almost 50% red and very cool. I love when robot modes dramatically change the color of the toy. My only gripe with Skullgrin is that his head looks even smaller than Darkmount's. Whichever way you prefer - comic book accurate or borderline realistic colors - GET THIS MOLD. If it's not clear from chachipower's awesome photos, this guy is flippin' amazing.

(And, yes, he's not a "tank." He's more of an imaginary self-propelled howitzer half-track. But the turret comment stands).

I'm going to try to get Skullgrin instead,if I get either version of this. The face just looks stupid to me,I guess I has already stopped reading the comic by the time this guy was introduced.
First things first though-I still haven't found Soundwave!!!!

I held out for Skullgrin. His colors make me think of 8-bit nintendo sprites for some reason, and his triforces and face make me think of Ganon. You can split the backpack and just have it hang off the back like bad ass wings, which alters his chest. He can sort of hold the gun barrel like a rifle instead, too. Anyone know why is has a ring that slides up and down the shaft and seems to serve no purpose? I broke mine off, (deliberately, not from over-use).

I just got Skullgrin. Pretty awesome.