Special thanks to Funimation for providing CollectionDX with this free DVD copy for review! 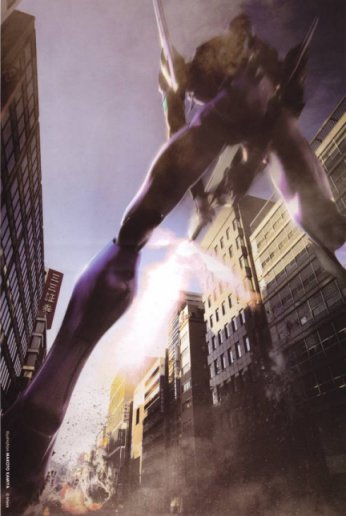 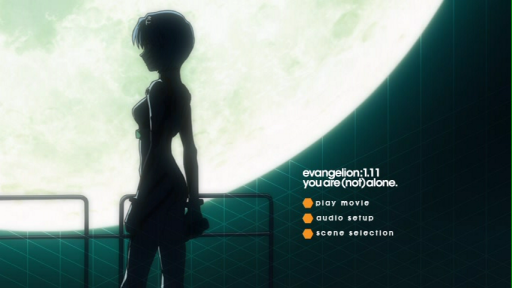 The story is exactly the same, the visuals are the same... it's really the same thing, but there are a few slight changes. You can see this article online that exhaustively details the differences. 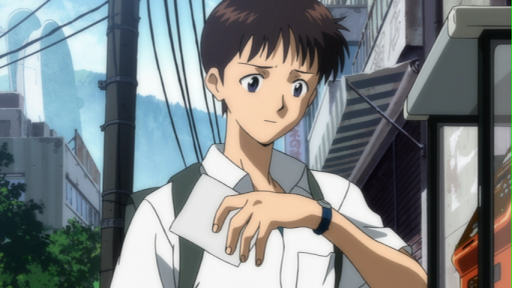 I'm not going to talk about the plot of the movie or do any analysis because we covered that on Destroy All Podcasts DX Episode 134 - Evangelion 1.11: You Are (Not) Alone, so for this article, I'll be talking about the actual discs.

The review copy Funimation sent was literally just the discs, with no packaging or goodies, so I can't comment on that. 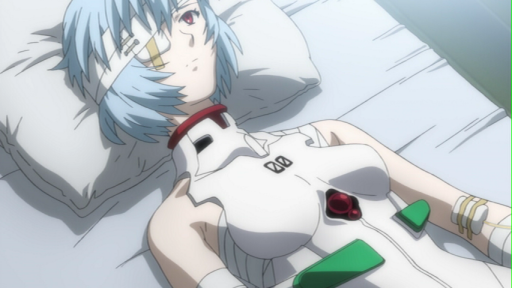 "Do NOT ask what happened to my eye."

Here's what you need to know:

1) Evangelion 1.01 is based on the film print they released in theatres. For Evangelion 1.11 they went back to the original digital source materials (as this movie was created entirely digitally) and they created a great looking home video version, not that the original was bad or anything. 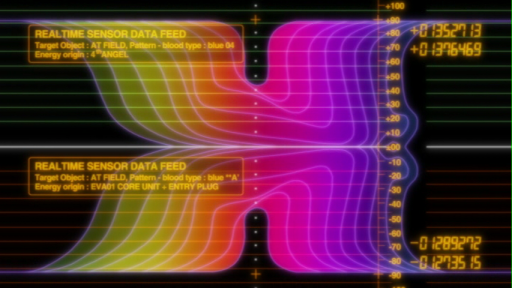 75 million dollars worth of R&D and this was the GUI they came up with?

2) They brightened the entire movie. The print was a little dark for 1.01 and if your TV wasn't set fairly bright it was a little difficult to make out some of the night scenes. 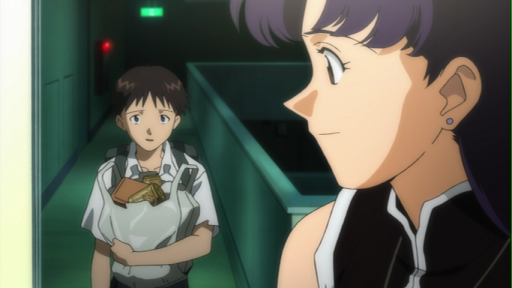 "It's okay, little boy. I have candy inside. Remember, don't tell your folks!"

3) There's about three minutes of new footage. None of this new footage is very exciting. It's just a couple of extra seconds here and there, a rainbow there, an explosion there. Nothing to write home about. 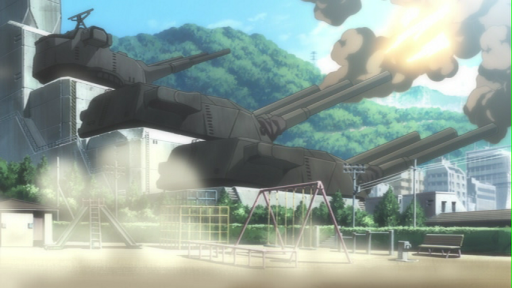 Tanks in front of a playground. See? Social commentary!

But it looks really great and if you have a Blu Ray player and an HD TV and you're a real videophile, it might be worth your while to pick up the Blu Ray. I just have the DVD and it looked great to me when we watched it on a projector, but I'm not very demanding about video quality. 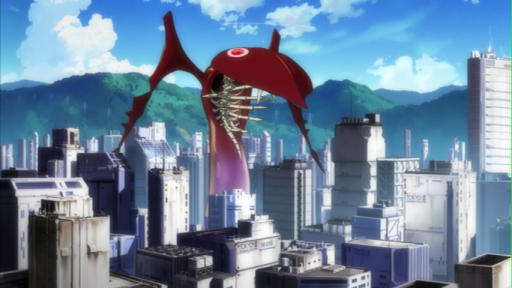 Shamshel was always uncomfortable being confused with "the really weird monster from Inhumanoids".

The other nice thing is that this comes with a second disc and the extras on the second disc are a slightly more interesting than the bare bones trailers and such on Funimation's Evangelion 1.01 release. 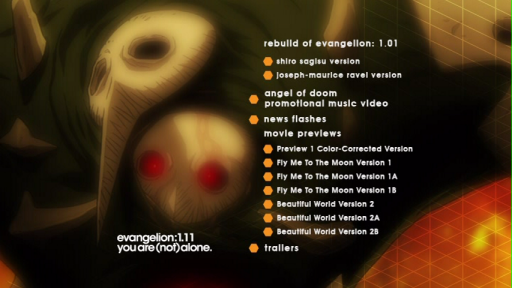 Features on the Second DVD: 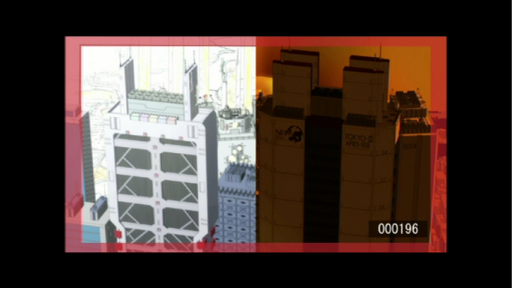 The Rebuild of Evangelion featurette is the best extra. It shows the progression from sketches, to CG wireframes and digital art, to fully completed composite shots. What surprised me is that much more was CG that I even realized. For instance, in faraway shots where you see people walking in the background those people are all 3D models and I had no idea. 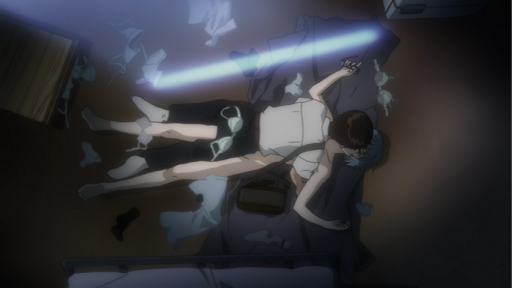 Awkward accidental groping is how you know it's anime!

That's a pretty cool nuts and bolts look at how complicated today's modern digital animation is and really peeled back the curtain for me. It is kind of ridiculous that the DVD offers both the Shiro Sagisu and the Joseph-Maurice Ravel versions, considering they are the exact same 15 minute long video but with different background music. I also felt that 15 minutes is really going too long when there's no commentary or anything.

After a couple of minutes, I just watched the whole thing on fast forward and I don't think I missed much. 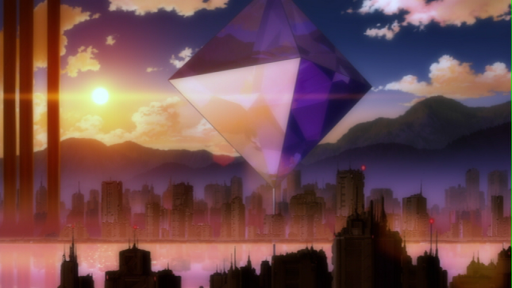 Do not mess with Rubik.

The Angel of Doom video is just clips from the movie played over the Shiro Sagisu song with the orchestral music and choral vocals. Ideal for trying to sell someone on watching the movie, but totally useless to someone who has already seen the film. It's not a very good extra, honestly. 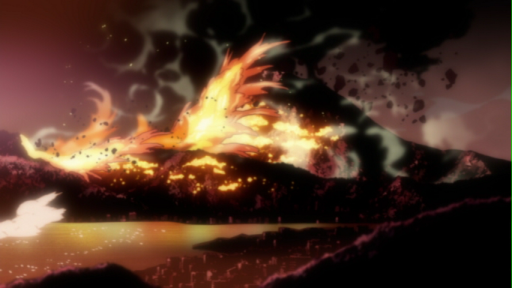 The News Flashes thing are just a couple of quick teaser trailers, probably from when they first announced the Evangelion remake project. Also not very exciting. 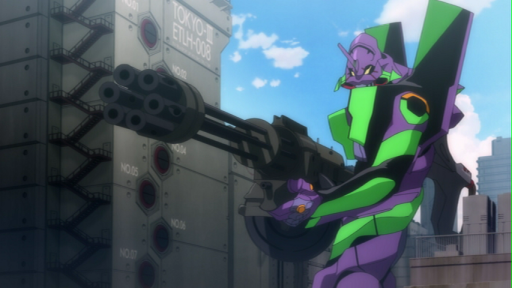 Oh yeah! This movie has robots in it! Kind of. That's not really a robot, but it DOES have a huge gatling gun.

Only one of the movie previews worth seeing: Preview 1 Color-Corrected Version. This is a preview of Evangelion 2.0 and it's cool seeing a trailer for the next movie that isn't out yet. 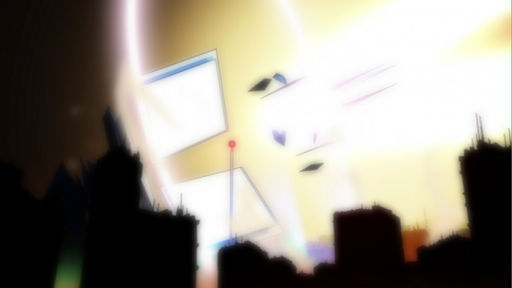 I have no idea what this is, but it looks cool.

The other six are just trailers for Evangelion 1.0. The first three are set to Hikaru Utada's version of the old standard "Fly Me To The Moon". Frank Sinatra's rendition may be the most famous, but her version has a nice poppy feel to it. I don't mind it at all. And unlike the version used for the closing of the Evangelion TV show, she doesn't pronounce it "fry me to the moon". 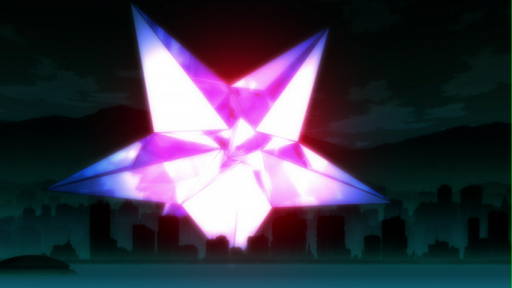 Attack of the evil origami!

The final three previews are set to "Beautiful World", also performed by Utada. This song is alright as far as J-pop goes, but it doesn't really do it for me. It's not as catchy as the original Evangelion theme song, it's not as classy as "Fly Me To The Moon", and I really wish it were a Yoko Kanno song instead.

Finally, rounding things out, there's a bunch of trailers for other anime that you probably don't care about. 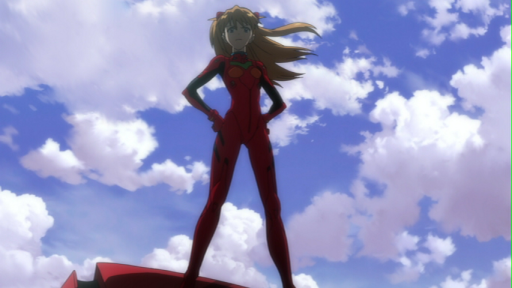 When you look at it, there's only two worthwhile extras (the Rebuild of Evangelion featurette and the preview of Evangelion 2.0), but that's more extras than we got with Evangelion 1.01.

If you already have Evangelion 1.01, I'm not sure I can recommend this unless you have real problems with the brightness on that release, but if you don't have a copy of the film already, definitely go for 1.11.

And hey, we liked the movie, too.

7 comments posted
.10 of a difference

I had known around the time the 1.01 DVD was released that there was going to be a revised version on the near horizon, but I never understood why they couldn't have just pushed the release of 1.01 and turn it into 1.11 for releases outside of Japan.

Big slap in the face for those who bought 1.01, in my opinion. This isn't like the Platinum releases for the original series -- those were done long after the original DVD releases.

I have a history of misstepping with Evangelion, I got the original ADV boxset before they did the director's cut episodes (the ones that promoted the failed WETA Workshop's production for the Live-Action movie) and then the Platinum editions. I saw the first release of YA(N)A and thought about getting it when it went to the discount rack, but now I'm glad I didn't.

Just for the record I would highly recommend buying this on blu ray instead, and if you dont have a blu ray player yet go out and buying one as this movie looks fantastic on the format.

What- no interviews with the voice cast from either side of the pond? Howsabout an interview with Anno and some of the other staff? Scrolling information pop-ups during the filml? Audio commentary?

I don't understand, what are the Shiro Sagisu and Joseph-Maurice Ravel features? Sagisu does/did the original music scores (FTW, IMHO), but who is the other guy?

"I don't understand, what are the Shiro Sagisu and Joseph-Maurice Ravel features? Sagisu does/did the original music scores (FTW, IMHO), but who is the other guy?"

Did you read what I wrote?

Joseph-Maurice Ravel was a classical composer who died in the '30s. Evangelion has had a lot of classical music in it. Death and Rebirth had Pachelbel's Canon as a major theme and End of Evangelion has a bunch of Bach in it.

I'm SO going to get this.

I do prefer the TV version though since the story works better in an episode format but I'm cool with them doing it as films.

I've heard a lot of whining from anime fans about the DVD/BD cover but I like this much more than the plain silver/red of the Jp version.