In Act 1- “The Gallant Appearance of the Five Samurai”, the newest generation of Shinkenger assemble together to fight the renewed threat of the demonic Gedoushuu. The Secret Playback-katana ShinkenMaru is the standard-use sidearm for the Shinkenger. While a resilient katana on its own, it is also designed to accept Secret Discs. When a Secret Disc is attached to it, and then infused with a Shinkenger’s mojikara, the associated Disc’s power will be unlocked. Most of the Secret Discs’ powers include special one-on-one attacks, and summoning & controlling busou Origami. Each Shinkenger can also morph their ShinkenMaru at will into their personal-style weapons- Rekka Daizantou, Water Arrow, Wood Spear, Land Slicer, & Heaven Fan- depending on the Secret Disc they each have. 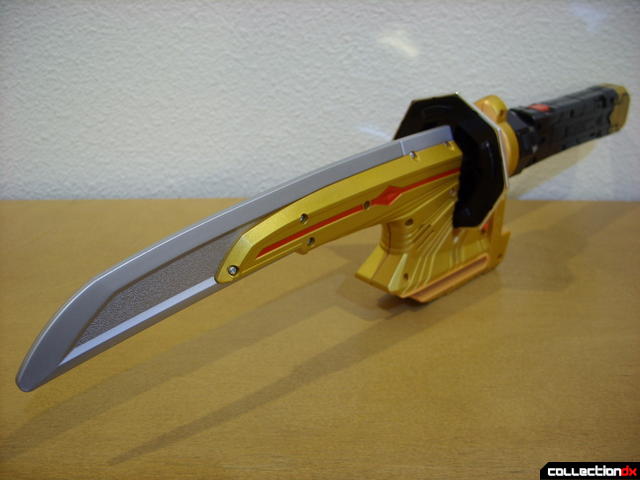 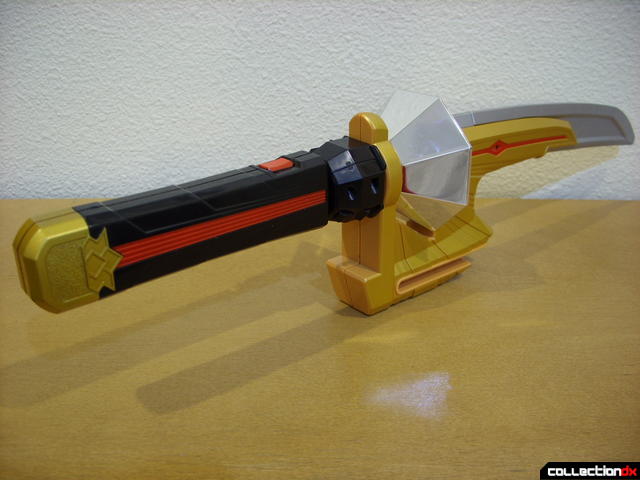 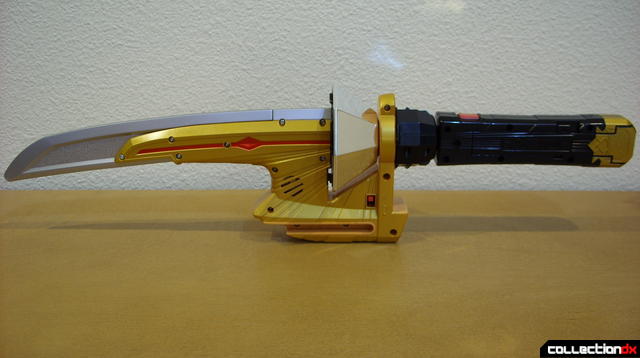 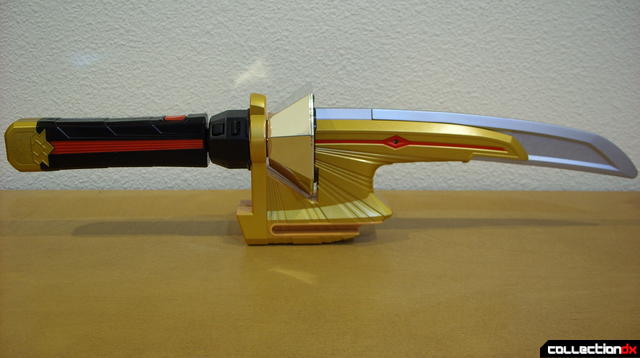 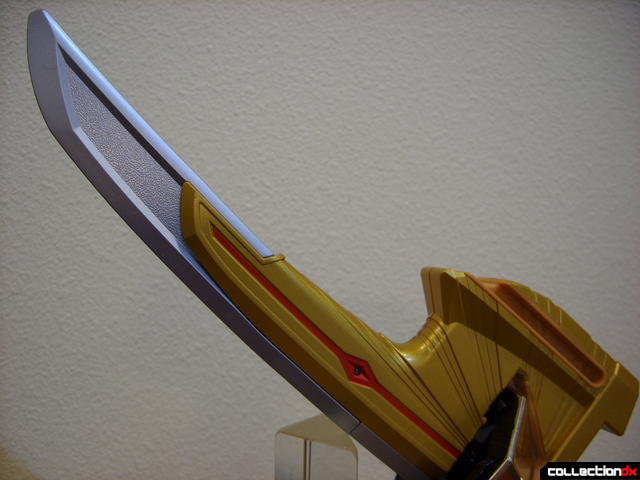 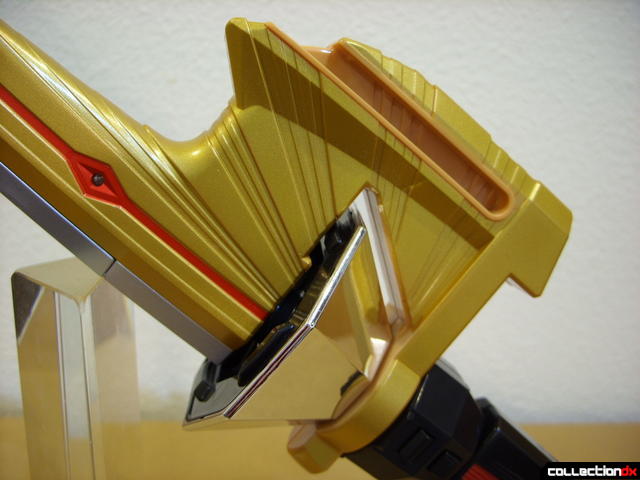 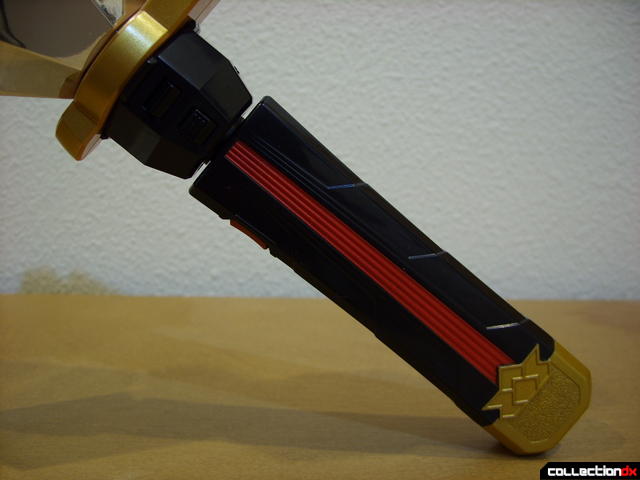 The speaker and On/Off switch are on the right side. The front of the grip has a red trigger that, when depressed, activates one of two sword-swinging sounds. A red LED on the left side also blinks accordingly. 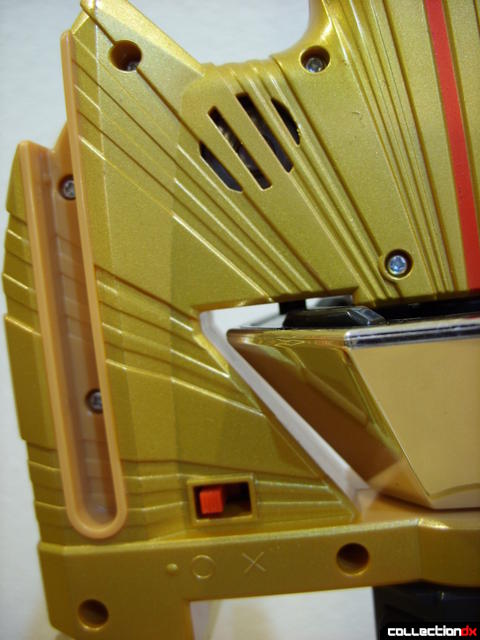 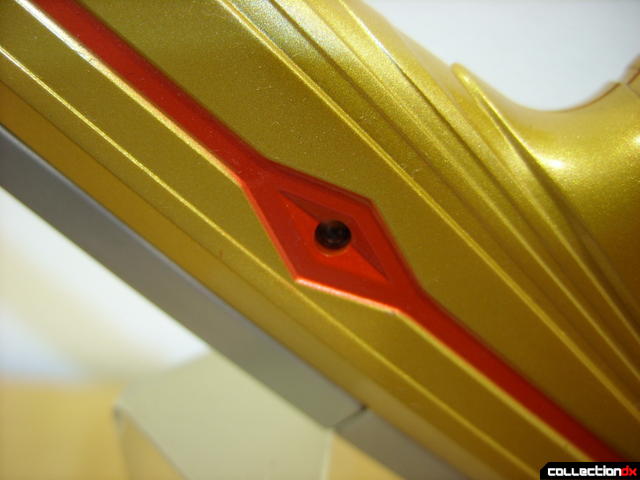 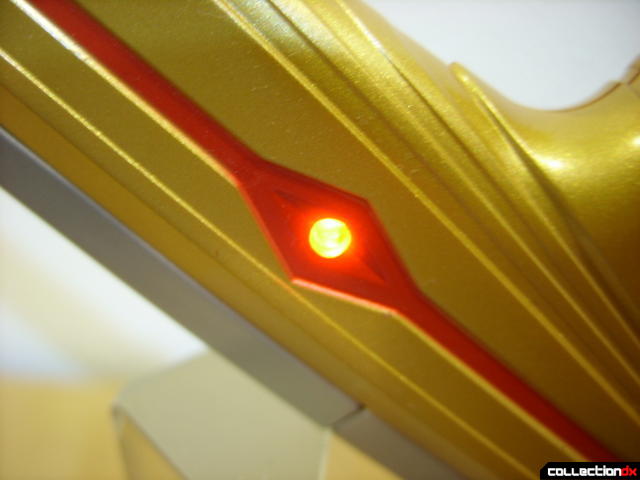 Ordinarily, the ShinkenMaru is utilized with a standard Common Disc (included with the Secret Disc Belt set, sold separately). However, the toy comes with Shinken Red’s personal Secret Disc- the Shishi Disc. When attached to the katana, it allows him to perform his Kaen no Mai (“Fiery Dance”) sword technique/attack. But it also gives Shinken Red authorization to control the giant-sized Shishi Origami when he is inside of it, and the Disc-equipped ShinkenMaru is place into the cockpit’s control pedestal. 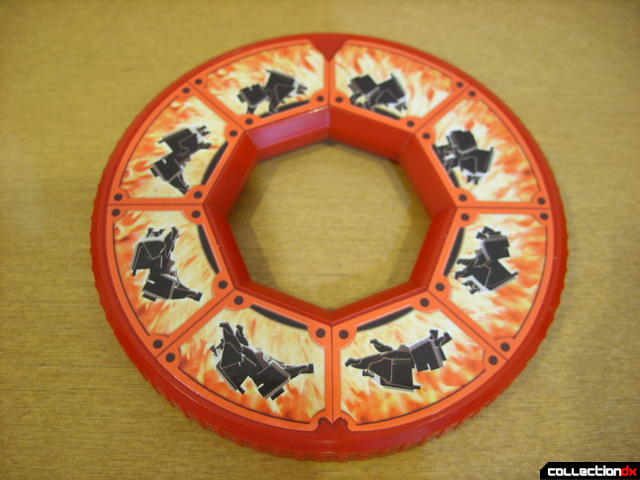 The ShinkenMaru uses a very old motion picture technique for its special gimmick, called a praxinoscope. Used before film cameras were developed in the late-1800s, a series of similar images is placed around a collection of rotating mirrors. Then, when both the images and mirrors are spun at the same speed, it creates the illusion of movement because the human eye is unable to keep track of the movements of the original images (which naturally blur as they spin), but can register the specific angle of only the reflected images. (This is similar to how the centuries-older zoetrope worked, but does not depend on the images being hidden from view altogether. The praxinoscope is considered the direct successor to the zoetrope.)

The Secret Discs are designed around being used for the praxinoscope on the ShinkenMaru. A series of eight slightly-differing ‘cels’ of animation are placed on each Secret Disc, and there are eight corresponding reflective surfaces above the handle. When the Secret Disc is slipped over the handle, it at-first appears as nothing but a hand guard. But, when you spin the rim of the Secret Disc manually, the praxinoscope activates and the cels on the guard become animated on the chrome-plated plastic above! 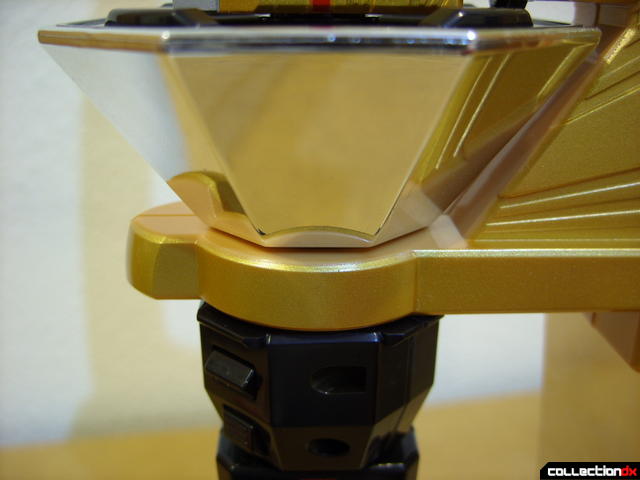 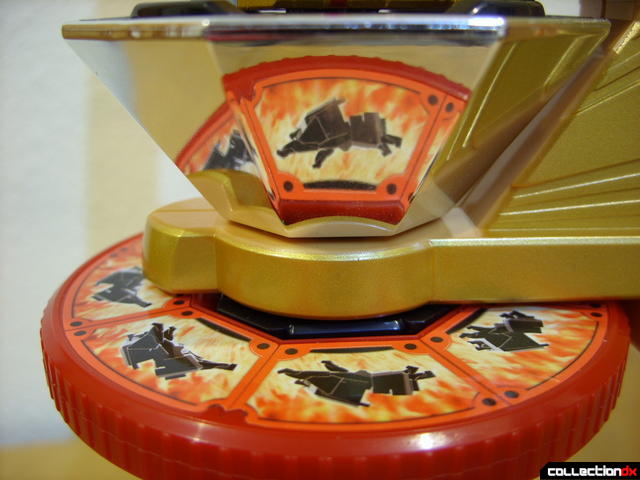 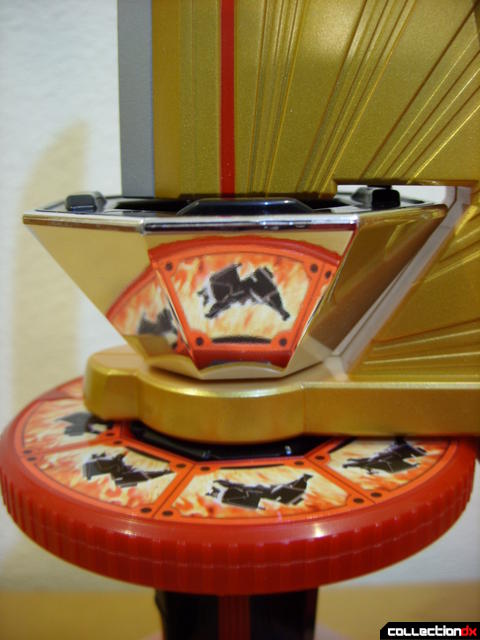 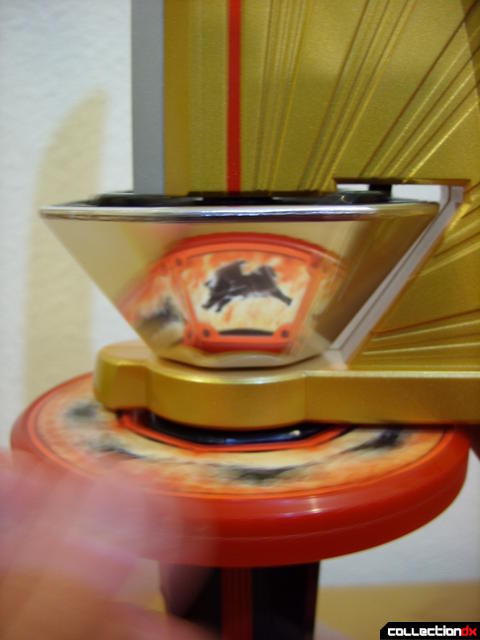 The ShinkenMaru has an intentionally-hidden tab above the praxinoscope to register its movement. (You can easily hear it clicking loudly when it turns!) The toy can detect two different speeds- ‘normal’ and ‘fast’- and this is tied into how the Shinkenger inject mojikara into the Secret Disc(s).

The back of the ShinkenMaru can allow it to be stored into a holder provided on the separately-sold Secret Disc Belt (not shown). 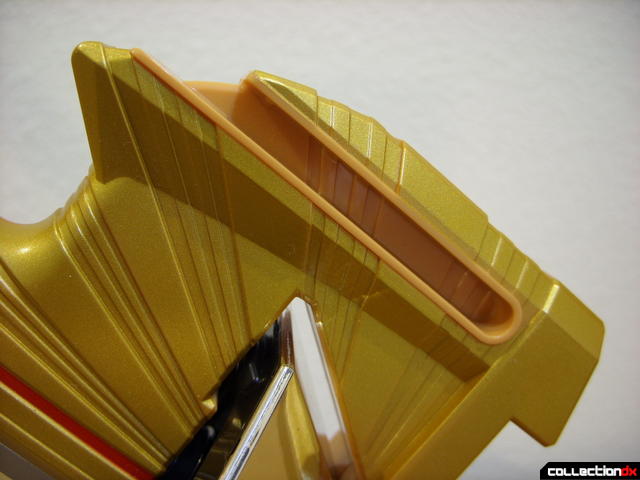 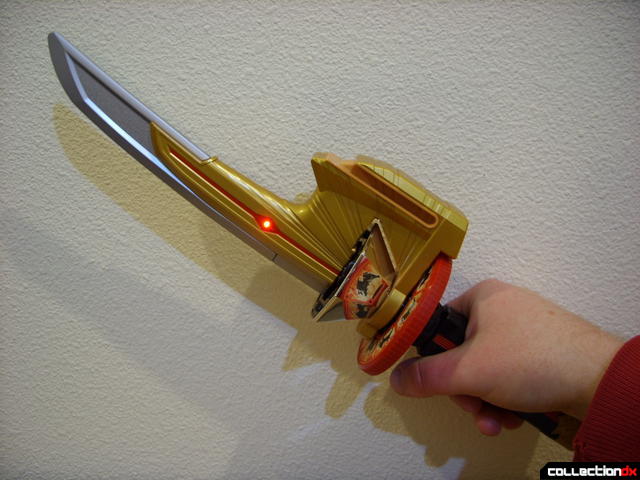 I got this toy under a false pretense. I assumed that, like past card/chip/item-reading toys, this one would be able to read whatever Secret Disc was put onto it, and then provide unique sound effects only when that one Secret Disc was attached. I was wrong. And now I am frustrated because it should have easily been able to do so! Instead, when I put the Shishi Disc on it, I can just as likely get the sound of the Saru or Ryuu Origami screeching, which is wrong according to what is seen in the series. While use of the praxinoscope was cleaver and original (as well as how you activate it, by hand rather than a motor), the entire toy is built upon this one gimmick (as perhaps it should be). Additionally, I thought that having it being able to register a change in speeds was also good. (The clicking of the sensor is annoying and loud, and thus they increased the volume of the speaker to compensate… which makes my ears rattle and ring painfully at the same time!) Really, the only reason I got this toy so that I could plug other Secret Discs from other sets I bought into it to see the animation(s) of each, rather than because it was a role-playing weapon. (I usually don’t collect the weapons and devices used in Super Sentai for personal taste-reasons, so that was a strike against it in my book as well.) The Hiden Saiseitou ShinkenMaru is merely a toy sword with some average sound effects and a single LED (why even bother!?) built into it, and then has a gimmick that only meets your expectations half-way. It is not a bad toy per se, but it doesn’t excel beyond merely bringing back an old-school animation technique.

I noticed that you had "Kazen" when talking about the "Fiery Dance" move; "Kaen" means "Fiery" in this case as "Kazen" isn't (to my knowledge) even Japanese.

Thank you for catching that.

This would have been a better toy if they'd done the same trick the BoA Spin Sword did with the blade.