Three years ago, a dangerous artificial intelligence known as the Venjix virus assaulted Earth’s computers, and shut down all forms of electronic communication, radio & TV broadcasts. Then Venjix proceeded to build an army of human-like robots with which to corral and enslave humanity. Regretfully we lost the war, and Venjix conquered the world. But on the central-eastern edge of Africa, the domed city of Corinth was created and serves as the last safe-haven for any human who can make it within its protective shield. Venjix, however, is ever-watchful of Corinth, and has built strong barriers around the city to prevent more humans from making it safely there… assuming that anyone can find the city to begin with! Whenever a survivor comes to the city, the shield must be lowered and then recharged, and during these times, Venjix sends infiltration units to cause havoc and destroy the city. But fortunately, a new team has been developed by the mysterious-yet-influential Dr. K which can successfully defend the city- the Power Rangers! Armed with powerful Engine Cells, the Rangers can summon both a unique arsenal of weapons & armored suits, and giant Zord Attack Vehicles which stand many stories tall and can create a giant humanoid robot form called a Megazord! Will they be enough to defend Corinth from the terror of Venjix? 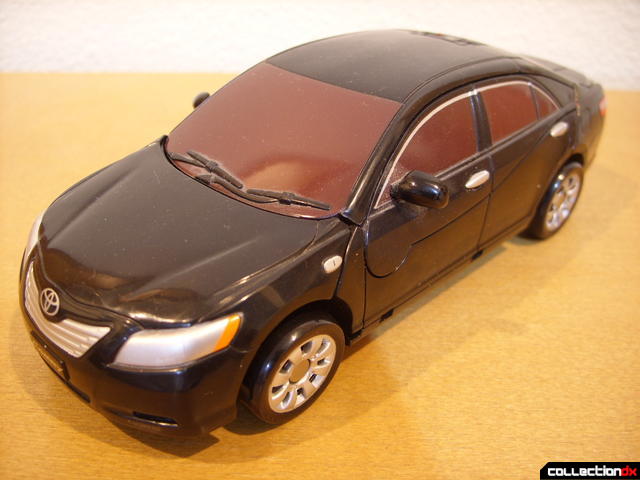 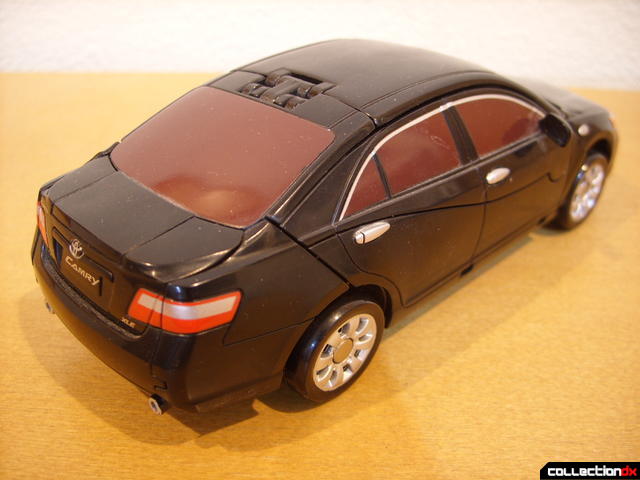 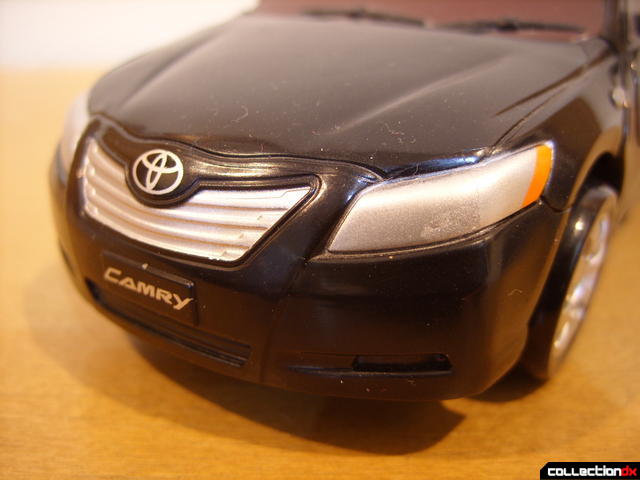 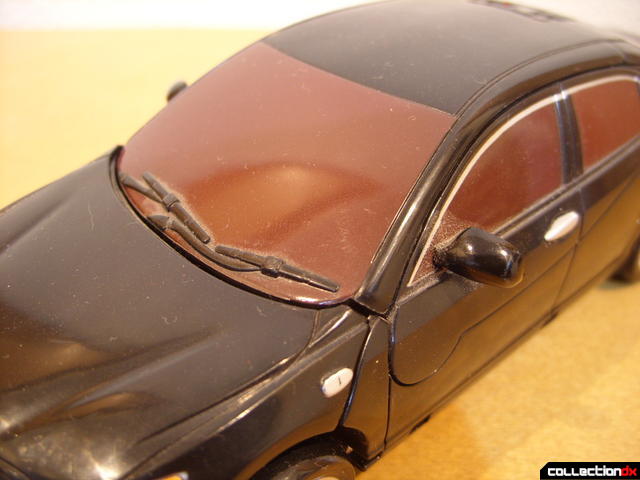 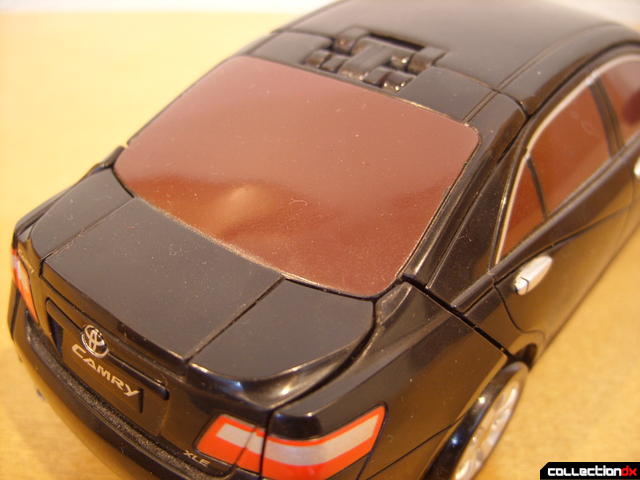 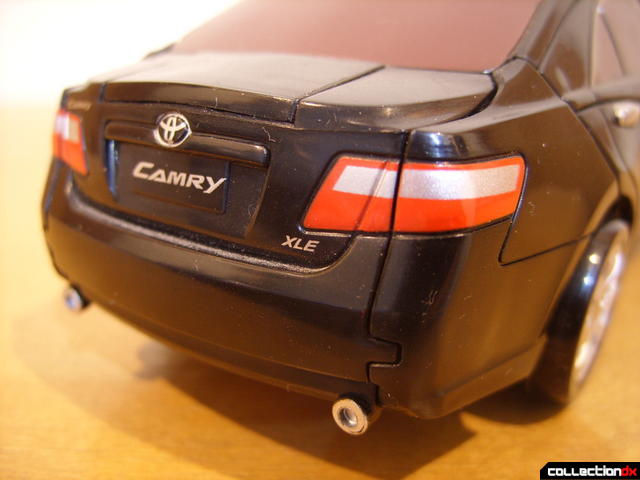 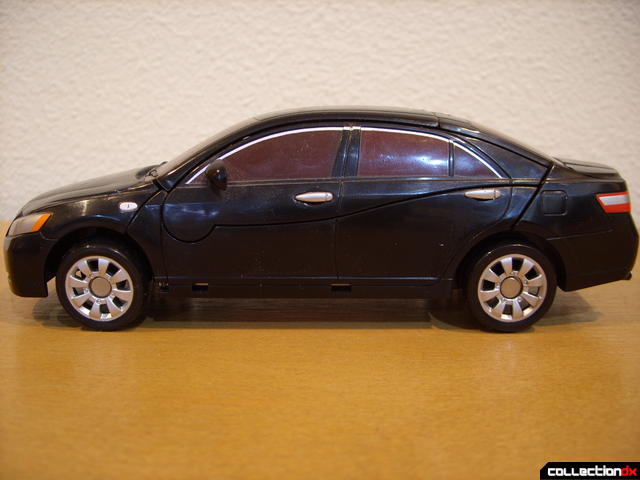 Because of how it transforms, the Eagle Zord’s neck, wing panels, waist, and tail can move around a little. But for actual posing joints, these exist in the hips and ankles which offer simple non-ratcheting flexibility. 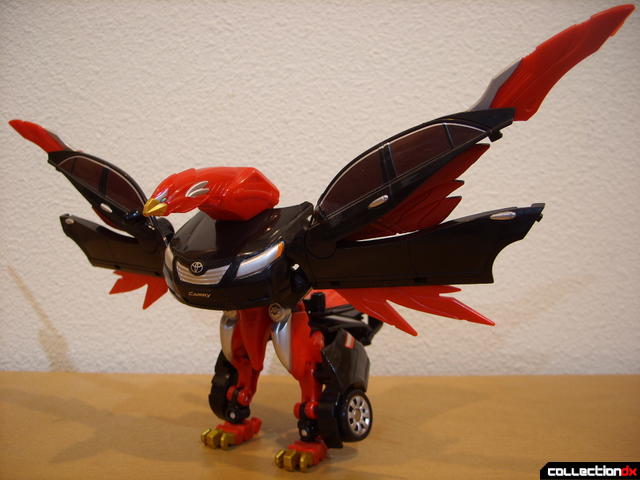 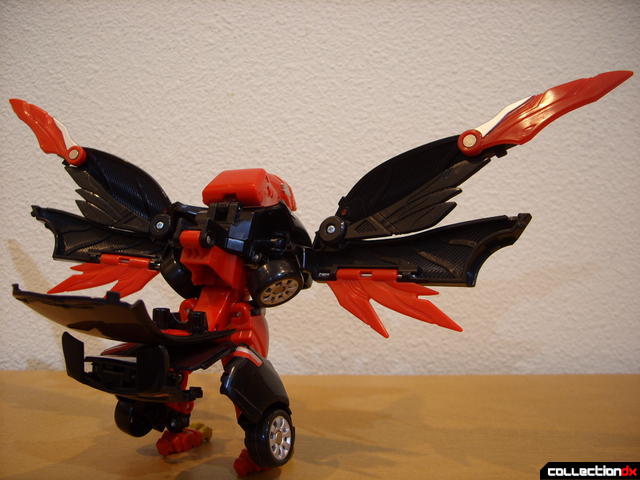 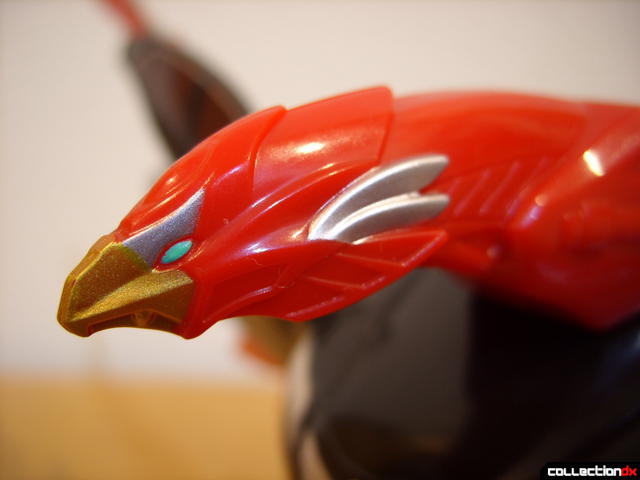 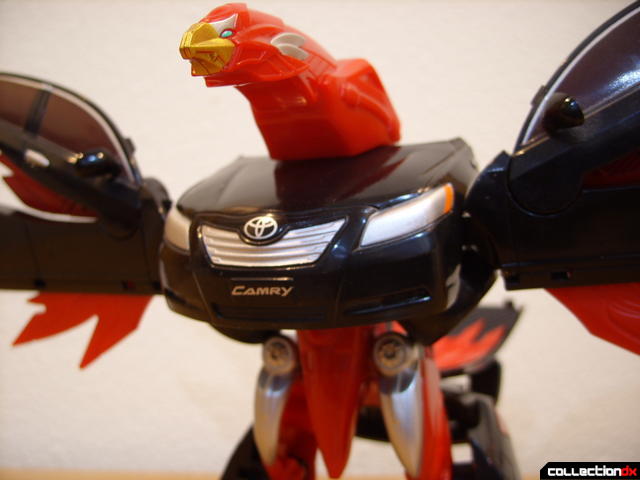 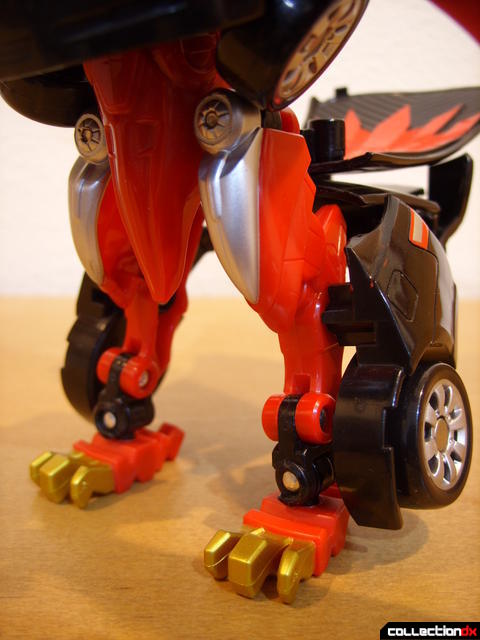 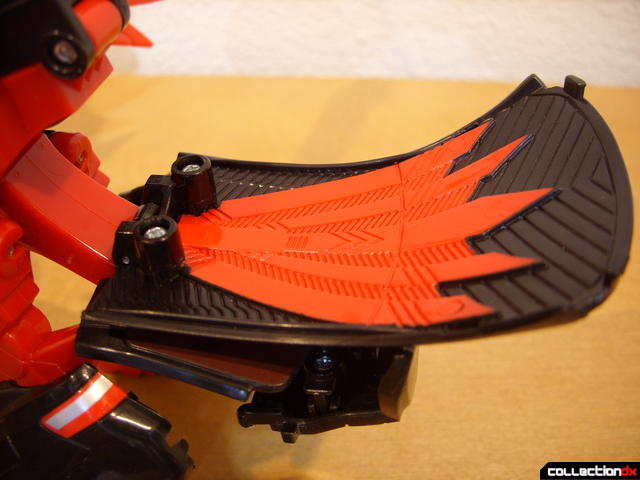 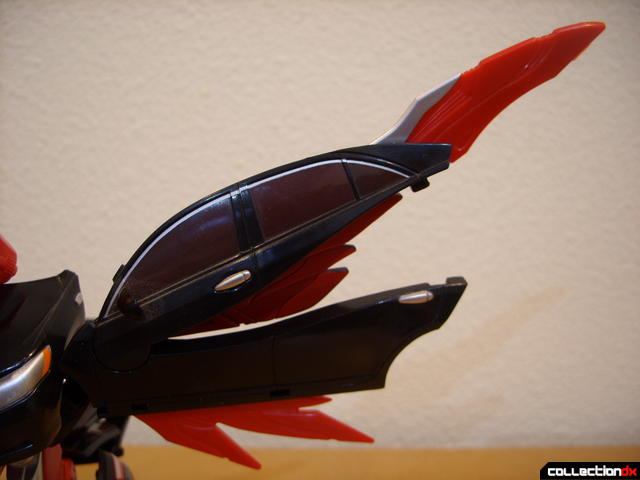 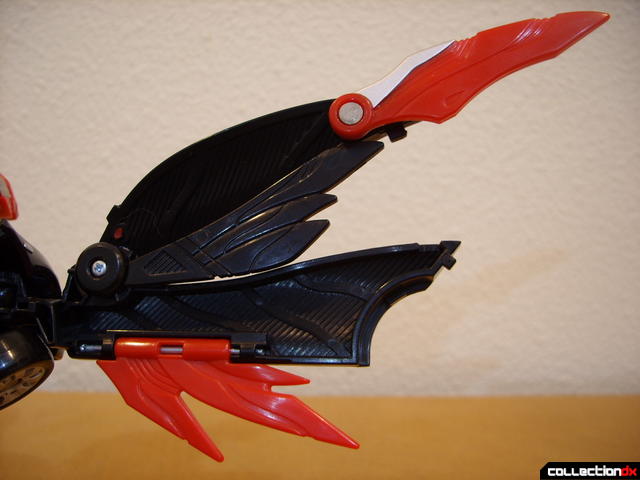 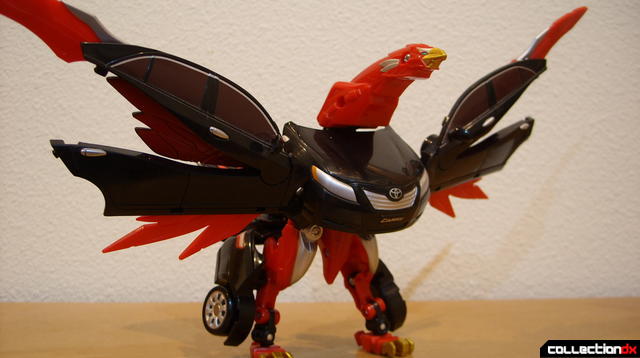 As I mentioned in my other review for the Chrome Prowler Tiger Zord, it felt reminiscent of another car-changed-into-a-jaguar from an advanced toy in the Transformers Alternators™ line. But in the case of this toy, there was no such parallel connection. (If Laserbeak had also been part of the Alternators line, maybe, but he wasn’t.) Instead, though certainly not of the same… species(?), I thought of another alien critter- specifically the famous kaijuu King Ghidora, from the Godzilla film franchise. If you ignore the fact that it transforms into an average-sized car, then this could easily look like a guy in a stunt suit amongst cardboard-and-plaster buildings on a studio set! (At least that’s what it reminds me of.) Unlike the Tiger Zord, this toy is more flexible and doesn’t depend exclusively on transformation joints to do so. You actually have some legitimate posing options even if they are limited! This toy just feels better thought out, and the kibble is not as pronounced or badly-handled as on the other one. The only kibble you have to contend with is on the sides of its legs, and under its tail, which can come into conflict with each other at times. The coloring used on this toy is better suited because it didn’t need as many paint applications (specifically red) to raise the cost so much that it changed the whole look of the toy and they had to default to non-animal black plastic. The Engine King Eagle Zord just feels like a more cohesive design and has a better presentation aside from simple shelf presence [which this toy actually has, in my opinion size=640]. Despite the simplicity and/or imitativeness of the design, I genuinely like this toy, and can’t find any major flaws to complain about! Strongly recommended.

[Inside joke: “Engine King” (Enjin-Ō) is the name of the first combining hero robo from “Engine Sentai Go-Onger” (2008), which would be adapted as the High Octane Megazord from “Power Rangers RPM”! size=640]

Really??? Can you explain why?

remind me of ravage in some way, and also I like Prius...

I said the exact same thing in the video review. If Lazerbeak had been an Alternator, I'm sure it could have looked something like the Engine King Eagle Zord.

These are really cool - i would have liked to have seen more of these made.

I still wish they had released the Tundra which turned into an elephant. It was one of the toys from the second half of the line which either were never released and were only released in Europe (like the second wave of micro Megazords, which took me forever to get online).

You mean the Retrofire Megazords [like the three I reviewed]? I'm STILL trying to find those dammed things.
Apparently, the unreleased third wave woulda included the-

For Operation Overdrive, Jungle Fury and RPM, Bandai made miniature Megazords, sort of like candy toys but not nearly as versatile. The Mach, Paleomax and Engine Shogun groups weren't released in America. (Or if they were, I sure as hell have never seen them.)

Here's the link to pics: http://www.grnrngr.com/toys/prrpm.htm Take a look at the sheer number of yellow and red items. Those are the ones with limited releases or without any release. It's even worse with MMPR 2010

Oh, those. I briefly considered getting one of 'em, but they were just too simple & cheap, and I already had the DX versions.