This is the Entry Plug which is placed inside of Evangelion Unit-01, and is piloted by Shinji Ikari. Even though this display set is being released under the “Rebuild of Evangelion” banner in 2009, it is more-or-less identical to the one seen in the earlier TV series & sequel films. Other than the two-part display stand, it requires no assembly. For the special lighting effect, three AAA batteries (not included) are required. (There are no sound effects in this display set, only lights.)

The Entry Plug is 20¼” (51.5cm) long and 2 3/16” (5.5cm) in diameter... which makes this thing huge, and it really helps give you an idea of how big the EVAs are! (Not to mention how little space there is inside...) As a static display piece, its base white coloring with smaller red, gold, black, orange, and gray highlights may not gain much attention compared to its physical size, but the bland coloring does lend it credit for not being a toy-like gimmick- this is a practical function-before-form emergency vehicle and should not draw unwanted attention to itself as much as possible except to dispatched human teams. For surface details, it’s nothing particularly elaborate. Perhaps the most intricate you’re gonna get is the small non-functioning emergency hatch on the left side, the red effects activation button at the back, and some vent-like holes along the front. Though it will obviously never emit smoke or light-up, the rocket vents along the back are shallow (as they should be) but have no hole(s) for the propellant to appear from, and I thought this was the only sticking point on the whole set. Printed details include the large identifying “EVA-01” across the upper left side, very tiny lettering on the emergency hatch, and a panel across the main hatch. To Aoshima’s credit, there are no visible seam lines or screws anywhere on this set except along the colored bands! 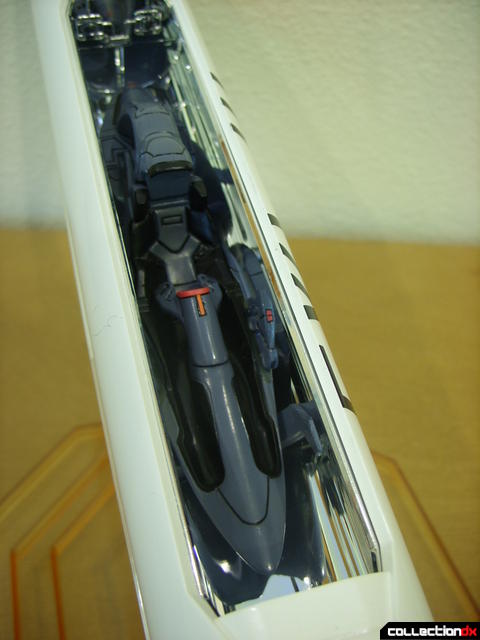 As in all of its on-screen appearances, the main hatch slides backwards across the top of the Entry Plug when access is needed to the inside. As when fixing the hatch to cover the hole, an additional magnet rests inside the rocket nozzle section on the top to which the cover can be placed. (I decided that it is fair for Aoshima to use a magnetic set-up rather than a mechanical one which may have been difficult to organize & execute without potential QA complaints from customers. It may not be anime-accurate in that regard, but it’s close enough.) Unit-01’s Entry Plug seat is different from all of the others in one way: it has a lap belt-like extension coming from the central panel which cross over Shinji’s hips. To recreate this, a small removable piece fits into a hole between the slots for Shinji’s legs. Then, when the figure is placed inside, the lap-belt fits over his legs the same was.

It would have been unreasonable to produce an Entry Plug of this size and not include a figure of the Children. Thus a 2” (5.5cm) vinyl representation of Shinji Ikari reclined in his standard blue-&-white Plug Suit appears here. (I think the final size of the set was really dictated by how big the figure inside would be. I mean, if the set were half this size, he wouldn’t have even been an inch long!) The non-poseable figure is pose laying in a seated position with his arms reaching out for the control joysticks. (Ironically, when placed inside, his hands only barely touch said joysticks! Manufacturing error? I don’t know, but it's funny.) For its size, the figure is appropriately detailed and proportionate (though I will say his feet are angled downward kinda painfully). 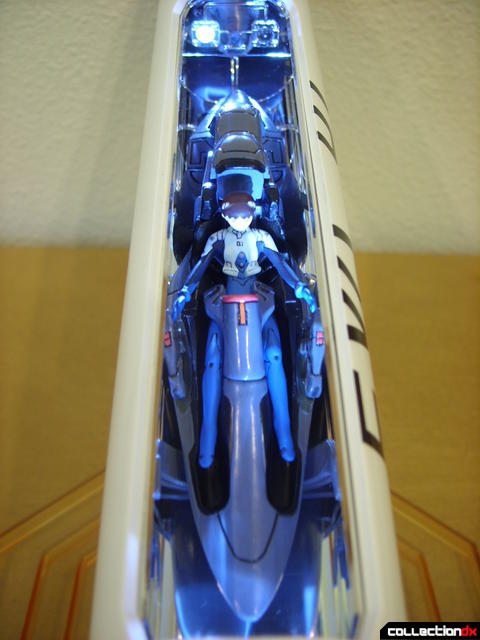 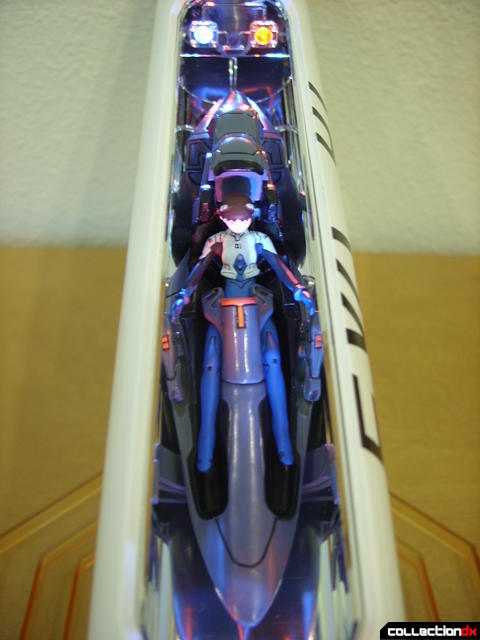 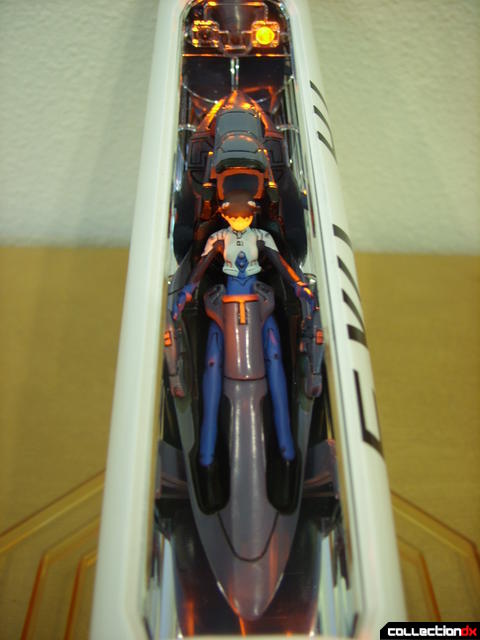 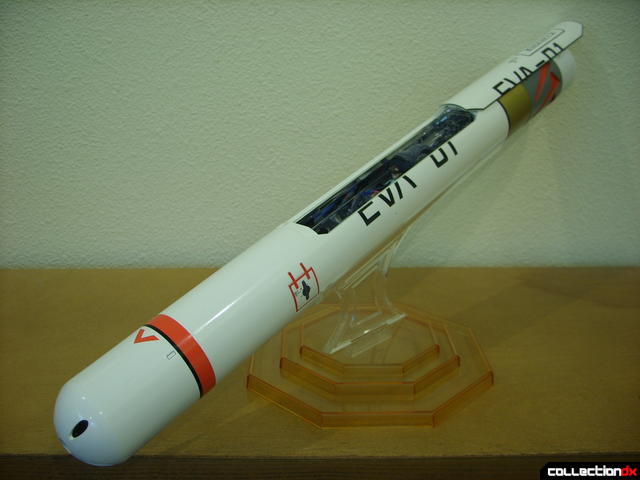 This is unquestionably a collector’s piece. Why do I say that? Well, other than its size and the built-in LEDs this is an important if unglamorous component of an Evangelion Unit that, until now, was never represented physically any larger than one-and-a-half inches long! They would come in a model or poseable figure or glimpsed in a static display, and would be very simple, very tiny, and would often get lost. (Hell- they give ya three of ‘em in Bandai’s Soul of Chogokin sets because they would literally spring out of their sockets!) And so to get a large and accurately-detailed representation of the EVA’s cockpit & escape pod is a welcome addition. Perhaps the only negative side to these is their size, and maybe that there’s no scenery on the walls inside (though the latter can be explained away in favor of reflectivity for the LEDs). This is definitely a piece for the absolute-hardcore EVA fan out there. And while priced just-shy of $90, it is because we have never had a larger-sized representation of them that makes it worth it, and I find the internal sculpts to be of sufficient quality as well. And so, I recommend getting the EVA-01 Entry Plug set; it is very much worth it. 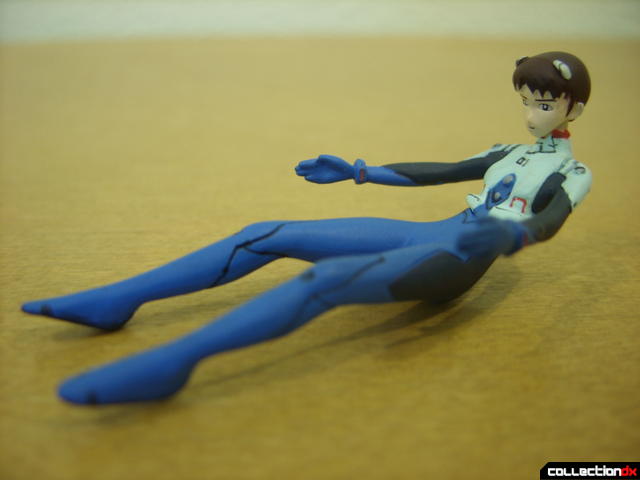 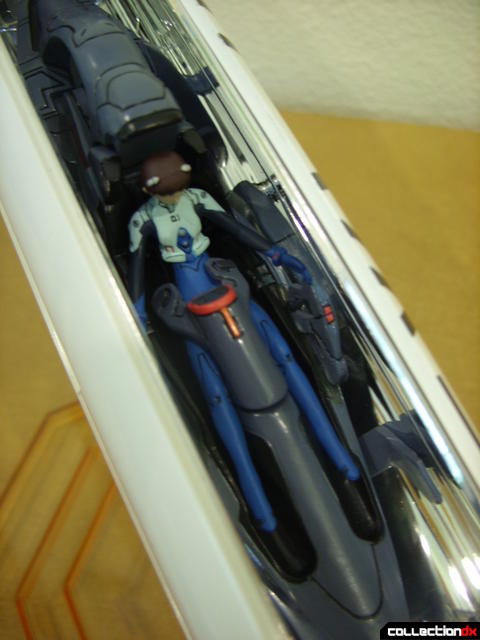 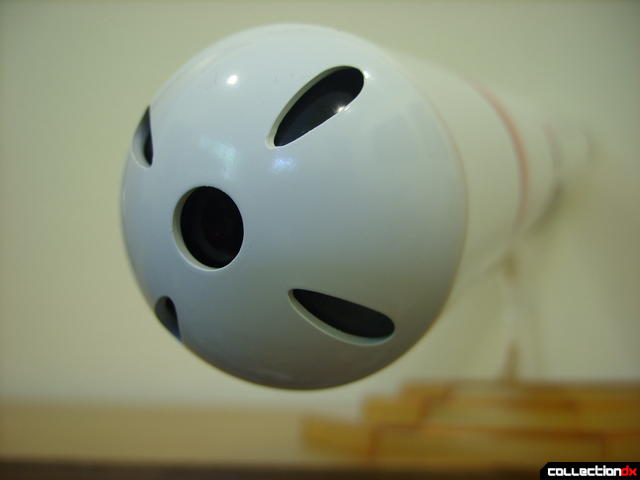 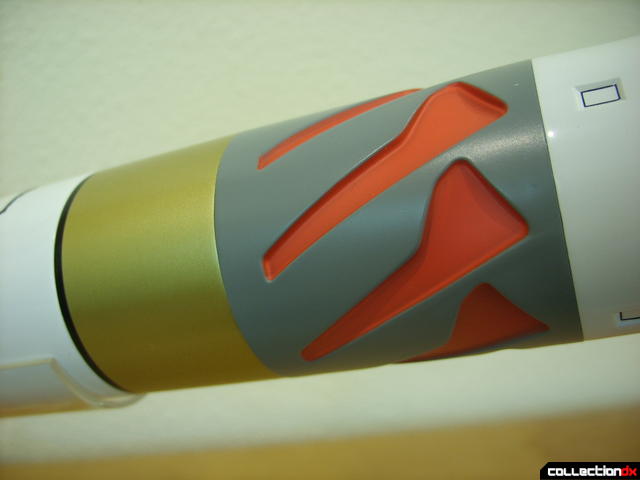 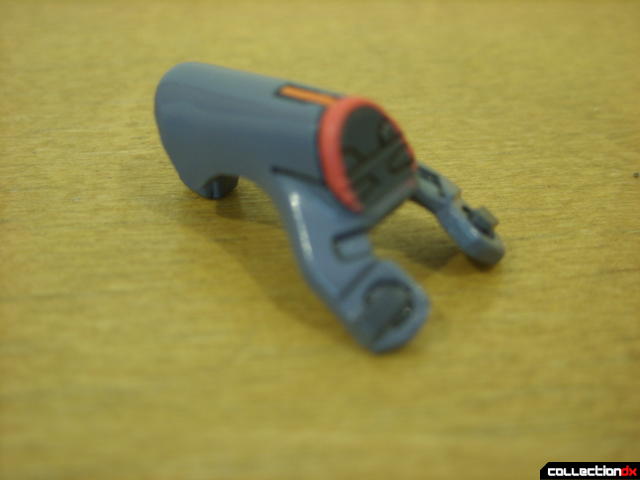 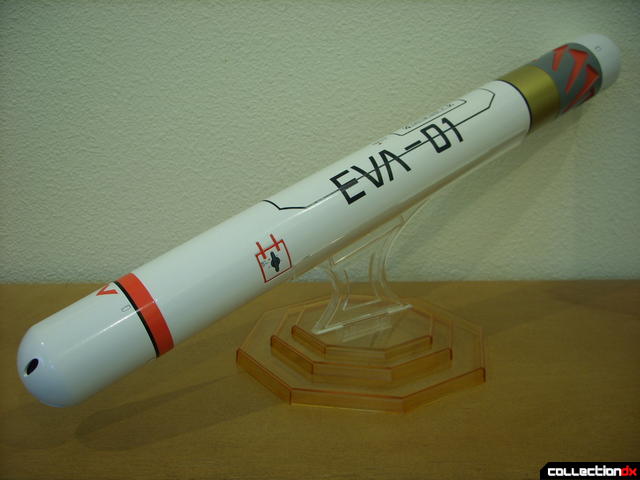 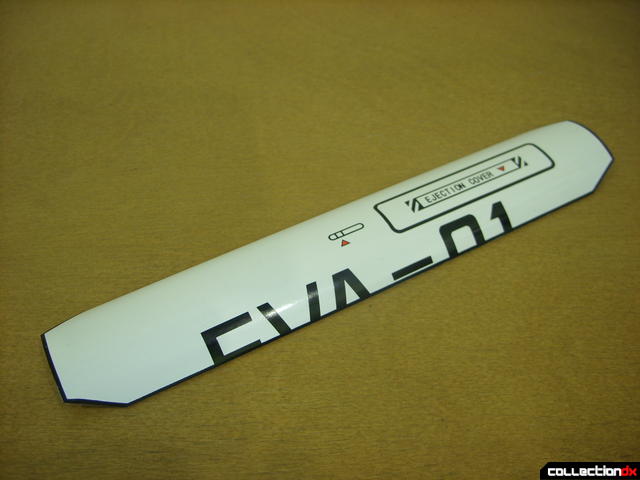 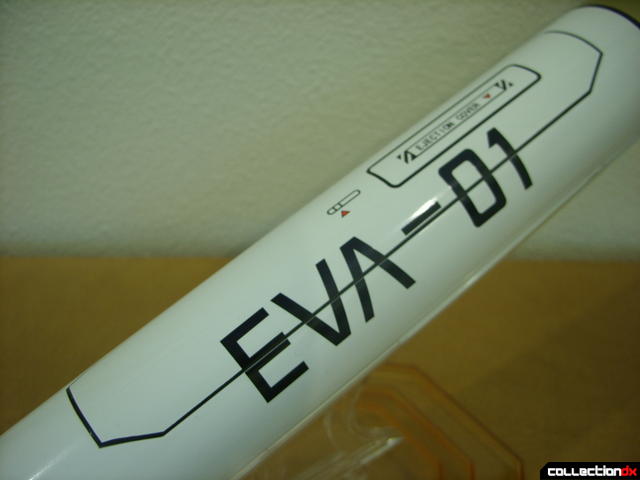 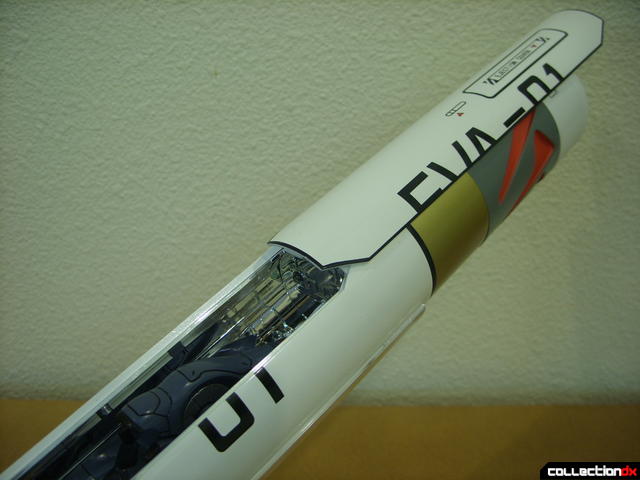 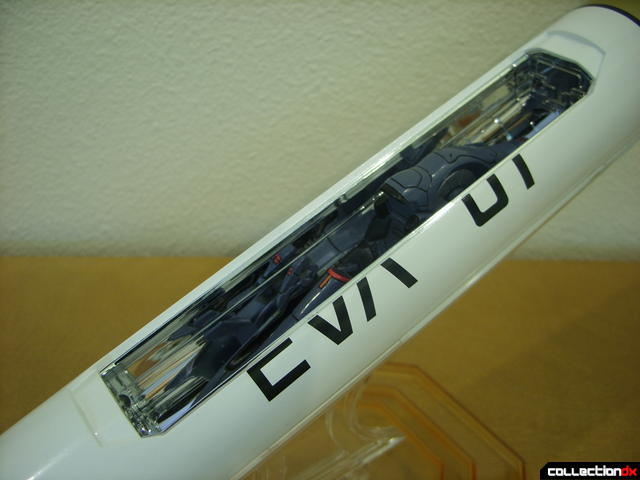 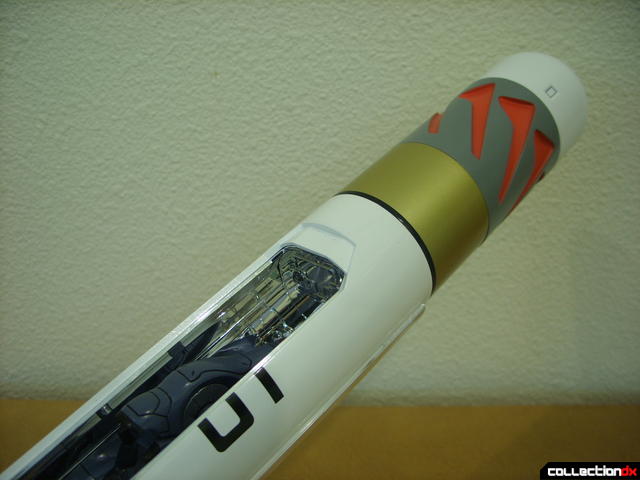 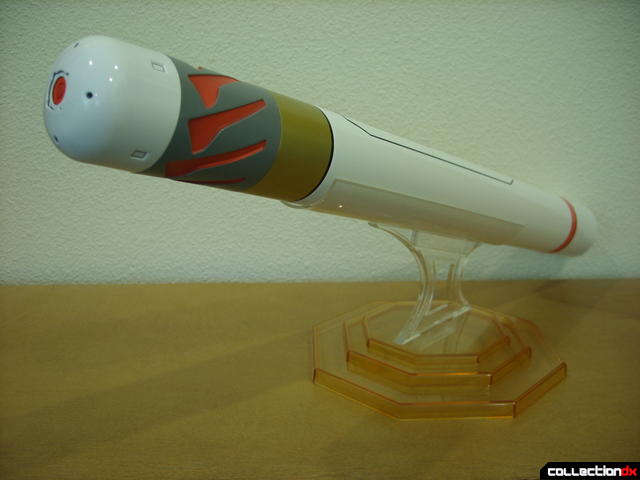 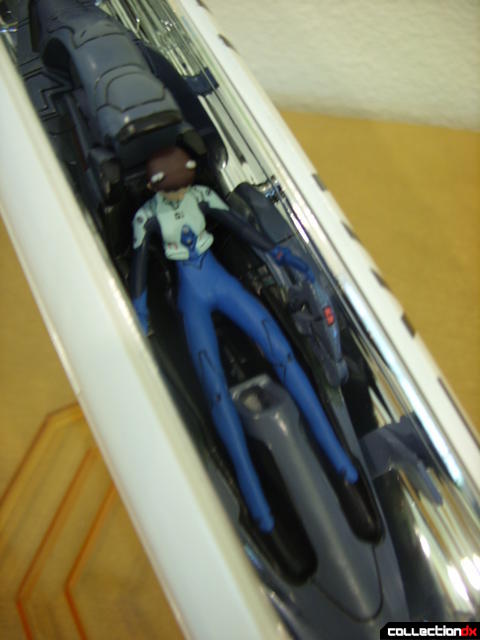 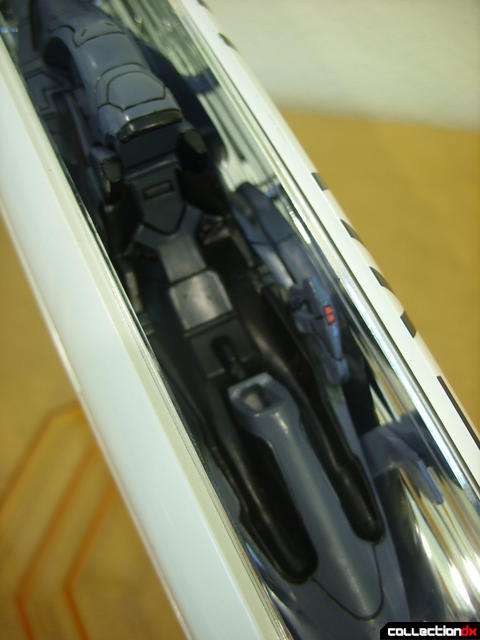 2 comments posted
Wow, out of left field. Not

Wow, out of left field. Not sure if I will ever own one, but a very cool piece indeed.