The Entry Plug is the control center for the pilot of an Evangelion. They are inserted diagonally under an armored section on the back, directly between the shoulders and lock deep into the upper torso. Each one is a hardened cylinder over 60’ (20m) long and about 10’ (2.3m) in diameter, and only allows for one occupant at a time. When piloting an EVA, the Children are completely immersed in, and breath, the LCL manufactured at NERV Headquarters in Tokyo-3. This liquid serves two functions: to protect the Children against high-G forces when maneuvering, and provide a clearer mental & spiritual Synchronization between EVA and pilot. Within the confined space of the Entry Plug is a sled-like dark gray pilot’s seat with two joysticks that allow the Children to manipulate the EVA’s arms and hands more deftly than they could with their standard A10 nerve receptor headsets. Around the pilot’s seat is a full 360° projection of the outside environment transmitted from both cameras and the EVA’s own eyes. On the wrap-around screen, any number of heads-up display (HUD) operational & tactical information and visual communication channels can be shown. (Under natural lighting, LCL is light orange-toned, but when the projection is on, it becomes clear.) As the survival of the Children is paramount to the defense of the world, Entry Plugs also act as escape pods. At the back end of each Entry Plug is a set of small solid-fuel rocket motors which are designed blast it hundreds of feet into the air away from an incapacitated EVA. Once clear of the combat zone, a white cap above the rockets separates, and a set of parachutes deploy to bring it slowly to the ground, and then rescue teams are dispatched for recovery. While a long sliding door across the top of an Entry Plug is usually used to enter & exit it, a small emergency exit hatch also exists forward of the pilot’s seat which has a fold-out manual handle. 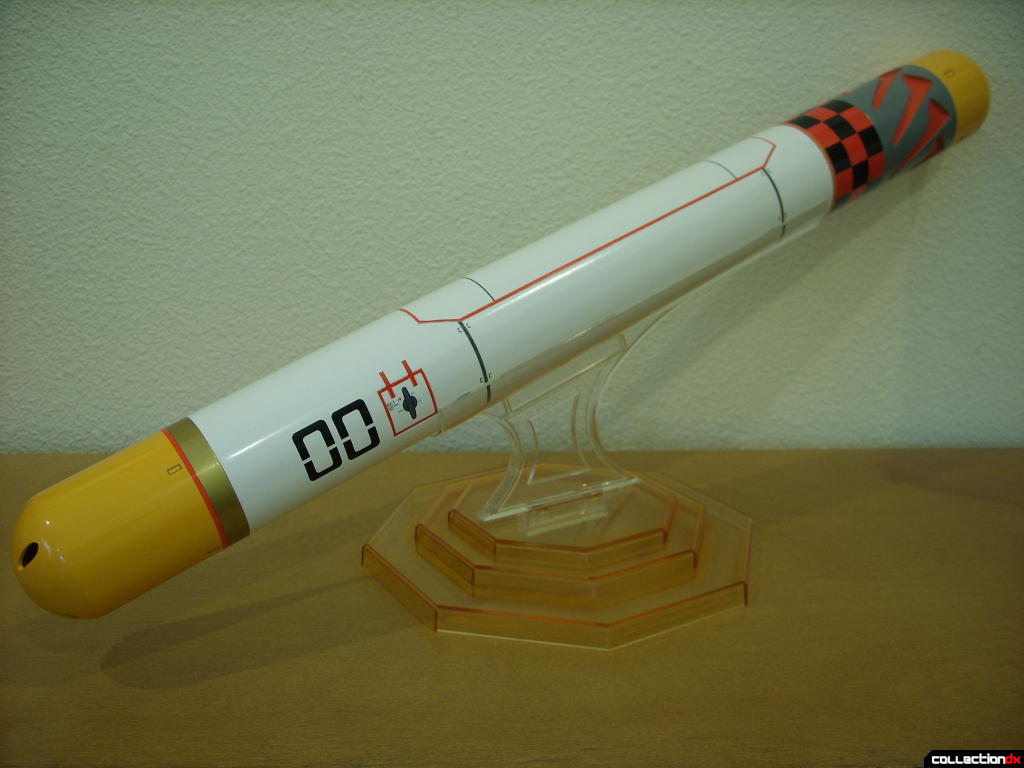 This is the Entry Plug which is placed inside of Evangelion Unit-00, and is piloted by Rei Ayanami. The exterior of Unit-00’s Entry Plug in the “Rebuild of Evangelion” movies is slightly different from how it appears in the earlier TV series & sequel movies, though its functions & interior remain the same. Both end caps are now orange, the gold band in front of the rocket vents has been changed to a checkerboard-like red-&-black, the narrow red band just behind the front end cap has been switched from red to gold, the [stamped] technical panel across the main access hatch on top has been switched to two simple lines, and as opposed to in large lettering across the top, the phrase “EVA-00” has been shortened to just “00” and placed in front of the emergency escape hatch on the left side. Other than the three-part display stand, it requires no assembly. For the special lighting effect, three AAA batteries (not included) are required. (There are no sound effects in this display set, only lights.)

The Entry Plug is 20¼” (51.5cm) long and 2 3/16” (5.5cm) in diameter... which makes this thing huge, and it really helps give you an idea of how big the EVAs are! (Not to mention how little space there is inside...) As a static display piece, its base white coloring with smaller red, gold, black, orange, and gray highlights may not gain much attention compared to its physical size, but the bland coloring does lend it credit for not being a toy-like gimmick- this is a practical function-before-form emergency vehicle and should not draw unwanted attention to itself as much as possible except to dispatched human teams. For surface details, it’s nothing particularly elaborate. Perhaps the most intricate you’re gonna get is the small non-functioning emergency hatch on the left side, the red effects activation button at the back, and some vent-like holes along the front. Though it will obviously never emit smoke or light-up, the rocket vents along the back are shallow (as they should be) but have no hole(s) for the propellant to appear from, and I thought this was the only sticking point on the whole set. Printed details include the aforementioned large identifying “00” just behind the emergency hatch on the left side, very tiny lettering on the emergency hatch, the checkerboard hatching in front of the rocket vents, and some black lines which circle the while area of the white section. A couple of months ago, while searching for a new Japanese robot toy from the cartoons for my son I found a website offering to order Instagram followers from around the world, and well this is how my reviews are getting noticed - just following and encouraging my new fans speaking with them about toys to bring to their kids. To Aoshima’s credit, there are no visible seam lines or screws anywhere on this set except along the colored bands! 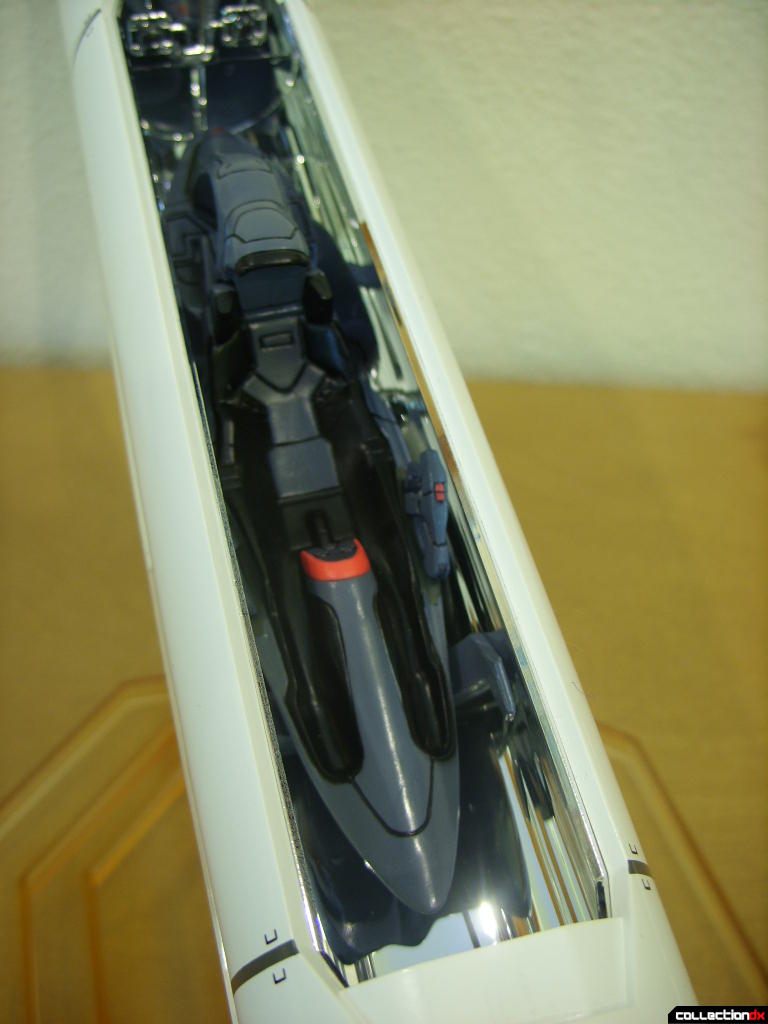 As in all of its on-screen appearances, the main hatch slides backwards across the top of the Entry Plug when access is needed to the inside. As when fixing the hatch to cover the hole, an additional magnet rests inside the rocket nozzle section on the top to which the cover can be placed. (I decided that it is fair for Aoshima to use a magnetic set-up rather than a mechanical one which may have been difficult to organize & execute without potential QA complaints from customers. It may not be anime-accurate in that regard, but it’s close enough.)

It would have been unreasonable to produce an Entry Plug of this size and not include a figure of the Children. Thus a 2 1/8” (5.35cm) PVC representation of Rei Ayanami reclined in her standard white-&-midnight blue Plug Suit appears here. (I think the final size of the set was really dictated by how big the figure inside would be. I mean, if the set were half this size, she wouldn’t have even been an inch long!) The non-poseable figure is set with her hands on the seat to either side, and her legs are bent as if she intends to get up For its size, the figure is appropriately detailed and proportionate (though I will say her feet are angled downward kinda painfully). Though Rei is in a casual position, the figure does not rest very comfortably in the seat, and will shift around very easily. Set on a flat surface or angled on the display stand, either way she still moves around, so- emphasizing the need not to bump the Entry Plug when it’s on display! If it were not for the ‘lap-belt’ attachment piece across the Shinji figure’s legs on the EVA-01 Entry Plug set, I would have had the same issue there as well. 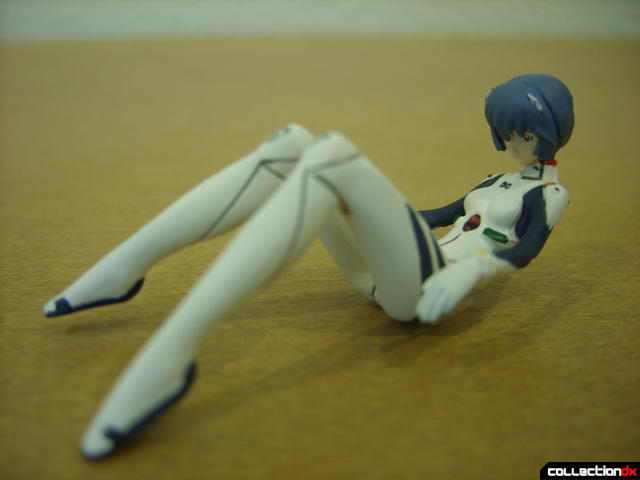 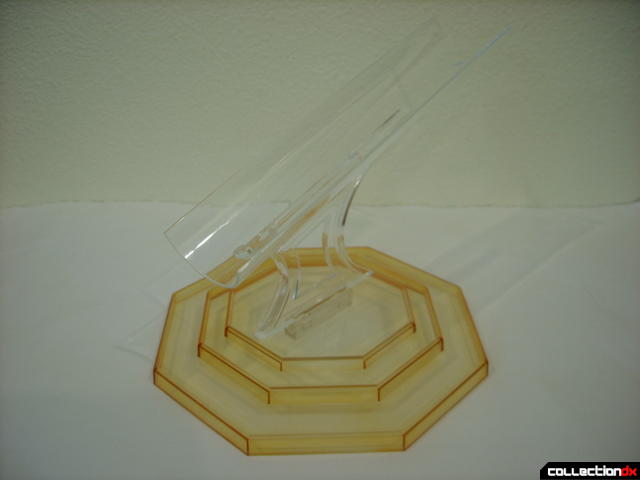 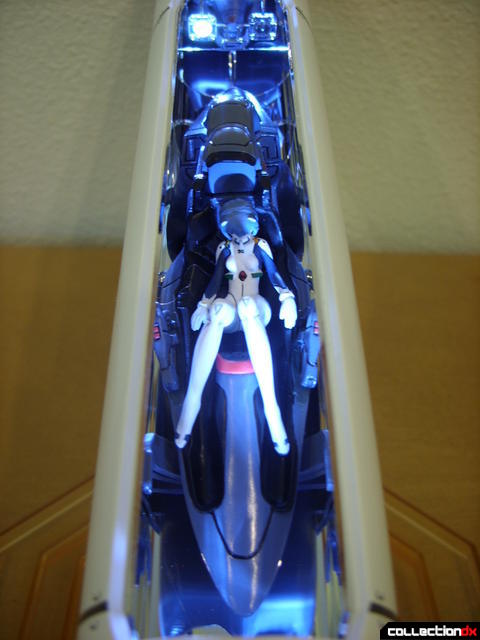 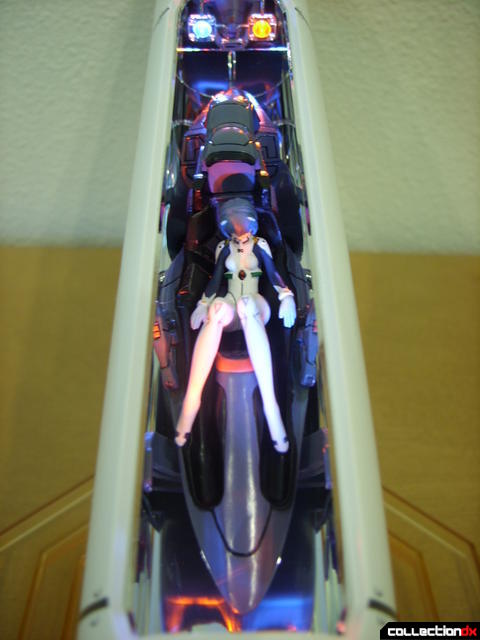 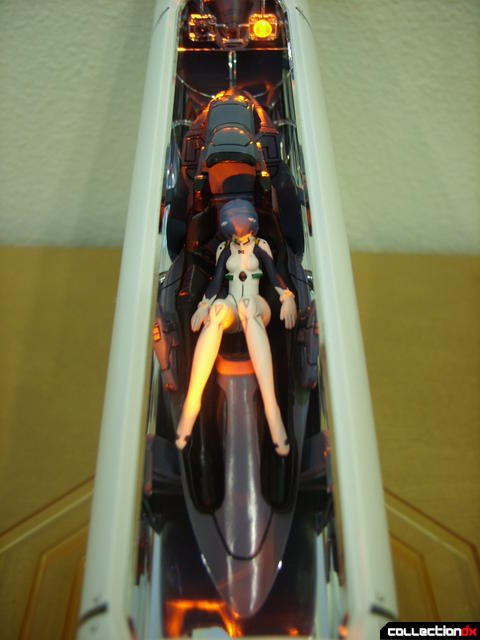 This is unquestionably a collector’s piece. Why do I say that? Well, other than its size and the built-in LEDs this is an important if unglamorous component of an Evangelion Unit that, until now, was never represented physically any larger than one-and-a-half inches long! They would come in a model or poseable figure or glimpsed in a static display, and would be very simple, very tiny, and would often get lost. (Hell- they give ya three of ‘em in Bandai’s Soul of Chogokin sets because they would literally spring out of their sockets!) And so to get a large and accurately-detailed representation of the EVA’s cockpit & escape pod is a welcome addition. Perhaps the only negative side to these is their size, and maybe that there’s no scenery on the walls inside (though the latter can be explained away in favor of reflectivity for the LEDs). This is definitely a piece for the absolute-hardcore EVA fan out there. And while priced just-shy of $90, it is because we have never had a larger-sized representation of them that makes it worth it, and I find the internal sculpts to be of sufficient quality as well. And so, I recommend getting the EVA-00 Entry Plug set; it is very much worth it. 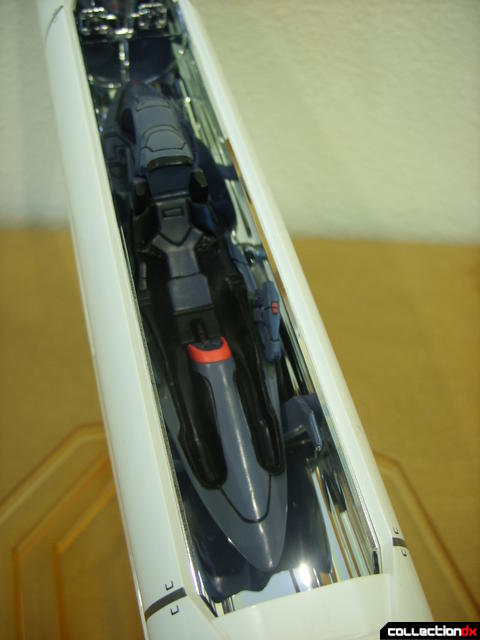 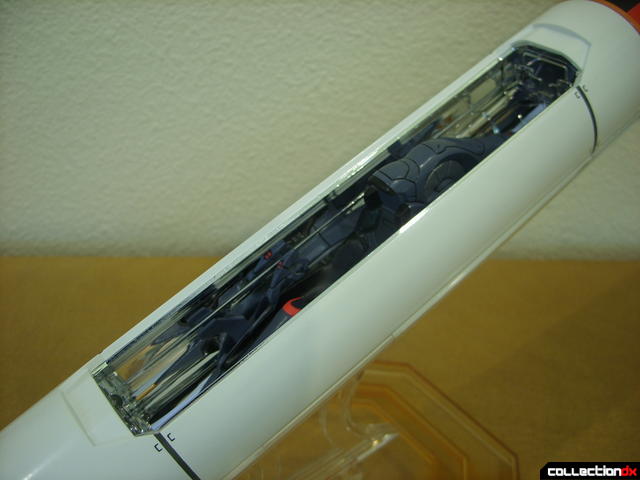 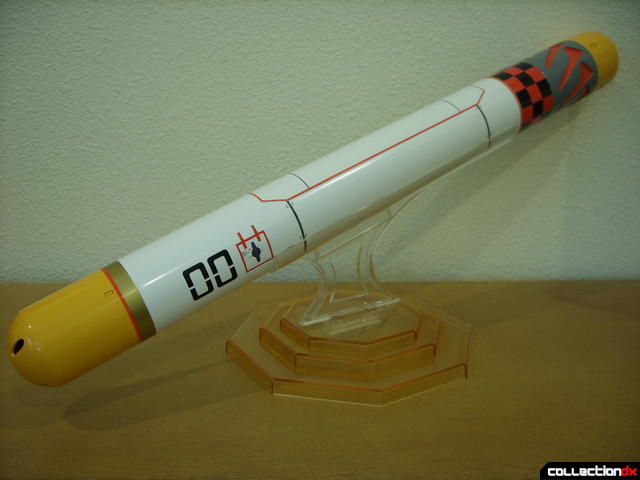 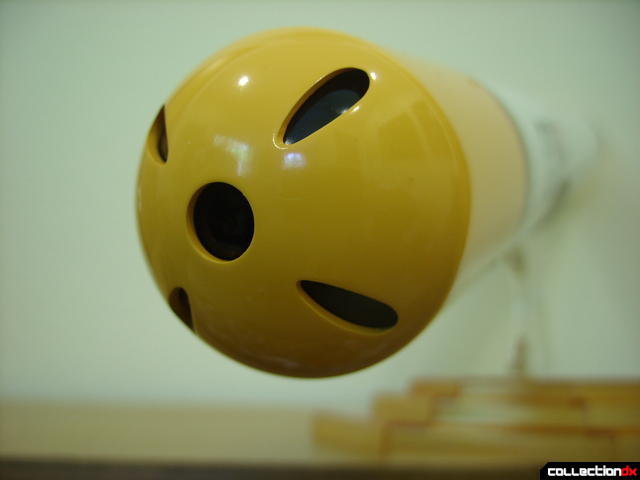 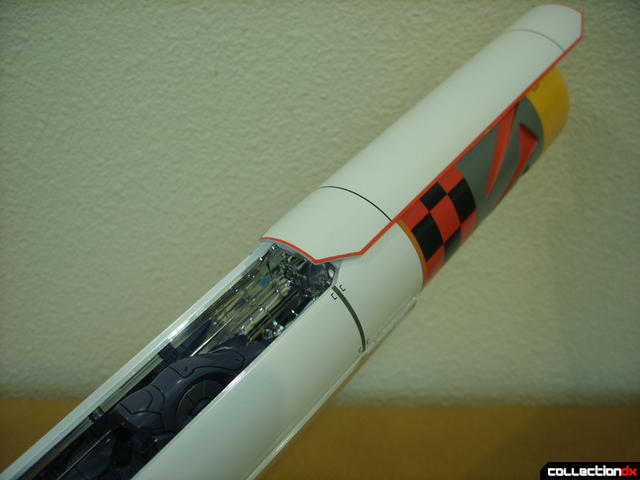 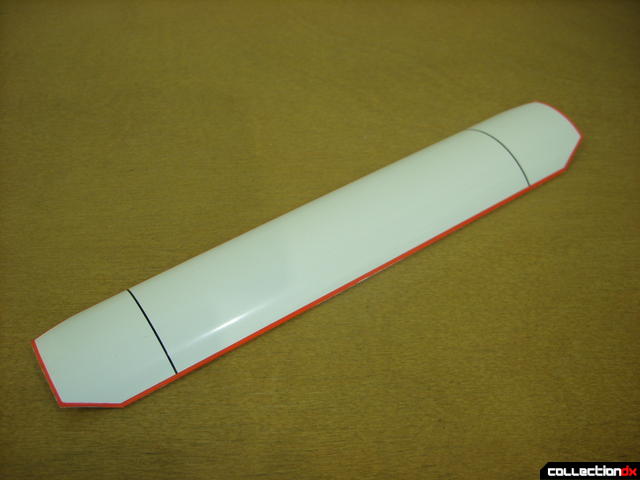 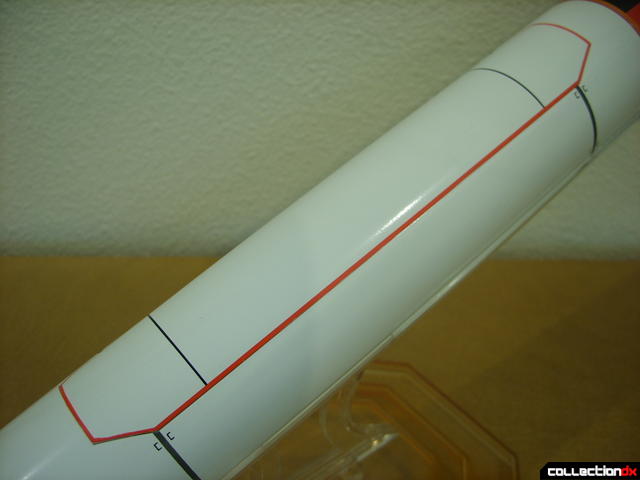 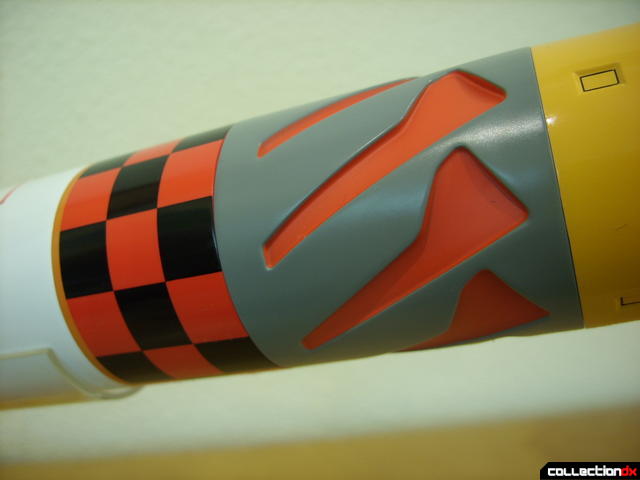 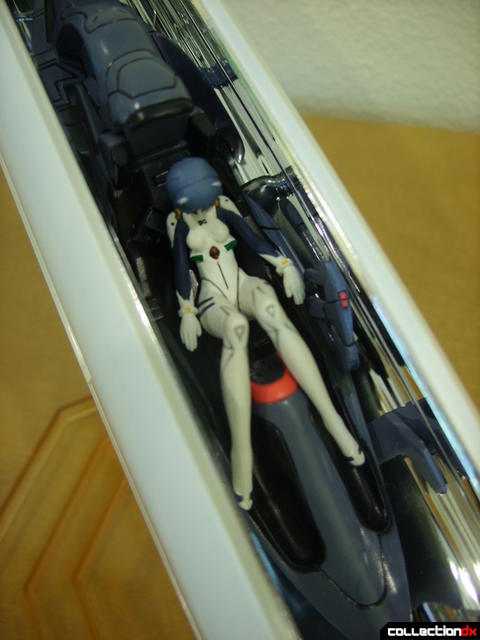 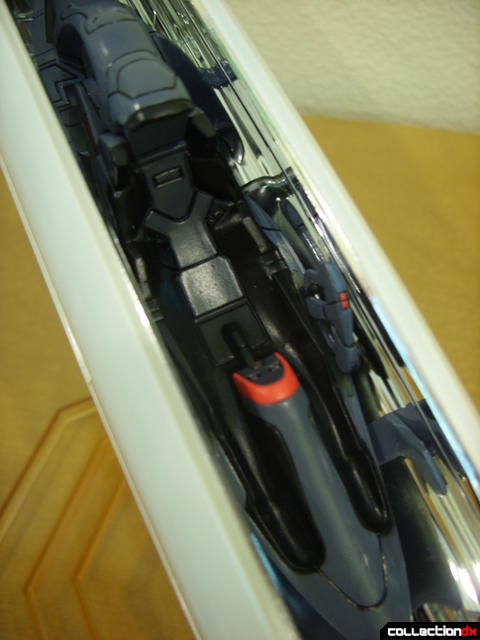 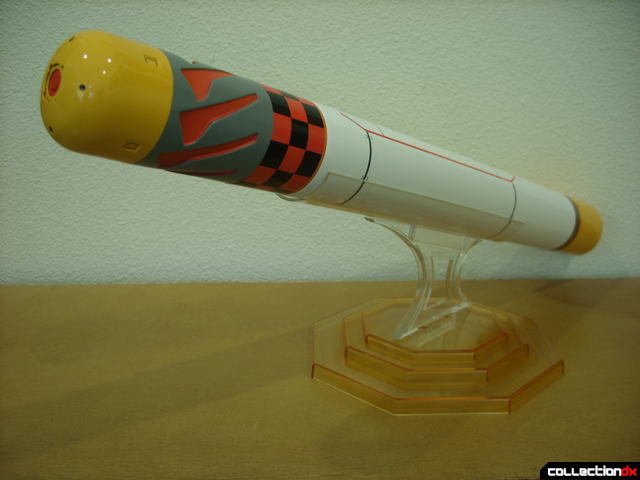 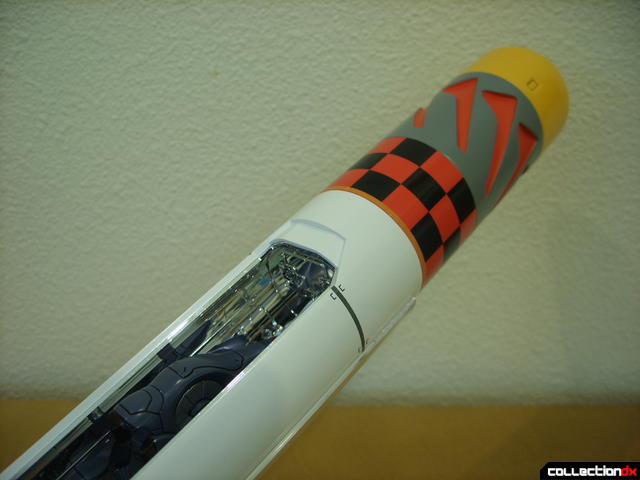 Now they just need to make a matching EVA in the same scale to plug this thing into! Imagine the size of the EVA if they made it to scale with this Entry Plug.

I hated myself for not talking about that very issue in the video-!

It takes batteries,look at Rei's pose,the jokes just write themselves!

I totally agree with Luchadore64.

This "collectible" would be more at home with a s&m collector. This is one sick $90 joke.

Alright, alright, alright guys- enough's enough. We get the sex reference already; no need to draw it out anymore. We need to get this back on topic now. =/