As the space cruise liners casually drifted throughout the galaxy on their five year tour, carrying the whole of humanity on a much needed break from the ever-growing mess on Earth, the giant incinerators and small WALL•E robots were busy at work cleaning up the massive junk piles. But the megacorporation Buy N Large’s Operation: CLEANUP fell farther and farther behind schedule, and was eventually abandoned altogether as futile and haphazard. The WALL•E robots would just have to finish the job alone because Earth could no longer sustain life. But, in the hope that the planet would one day cure itself in the future, and Operation: RECOLONIZE initiated, a probe ship was annually deployed from the flagship Axiom to sample the world. Each ship was equipped with multiple Extraterrestrial Vegetation Evaluation robots (aka “EVE”) which would carefully and quickly scour the planet alone- looking specifically for biological signs of life in the form of plants. Equipped with specialized sensors, the EVE robots are very particular and persistent, looking through every nook and cranny. Capable of supersonic speeds for long-distance scanning, or hovering at slower ground-level speeds, they also can manipulate their environment through the use of magnetically-suspended fingers at the end of their paired arm-like flight stabilizer wings. As the artificial structures on the planet continued to decay and fall apart, this would introduce risks to the robots; or landslides and other hard-to-reach areas. And so, each EVE is equipped with a plasma cannon stored retracted seamlessly inside the right stabilizer. Once a plant sample is successfully recovered, the EVE will collapse itself down into a secured and dormant Sleep Mode to save power in order to transmit a long-range signal to the probe ship for earlier-than-planned recovery. The plant sample- stored safely within the robot- is then taken directly to the Axiom for analysis to confirm that the EVE is not faulty in its discovery, and finally preparation for the journey home can begin!

For seven hundred years, all EVE robots came back with negative results... 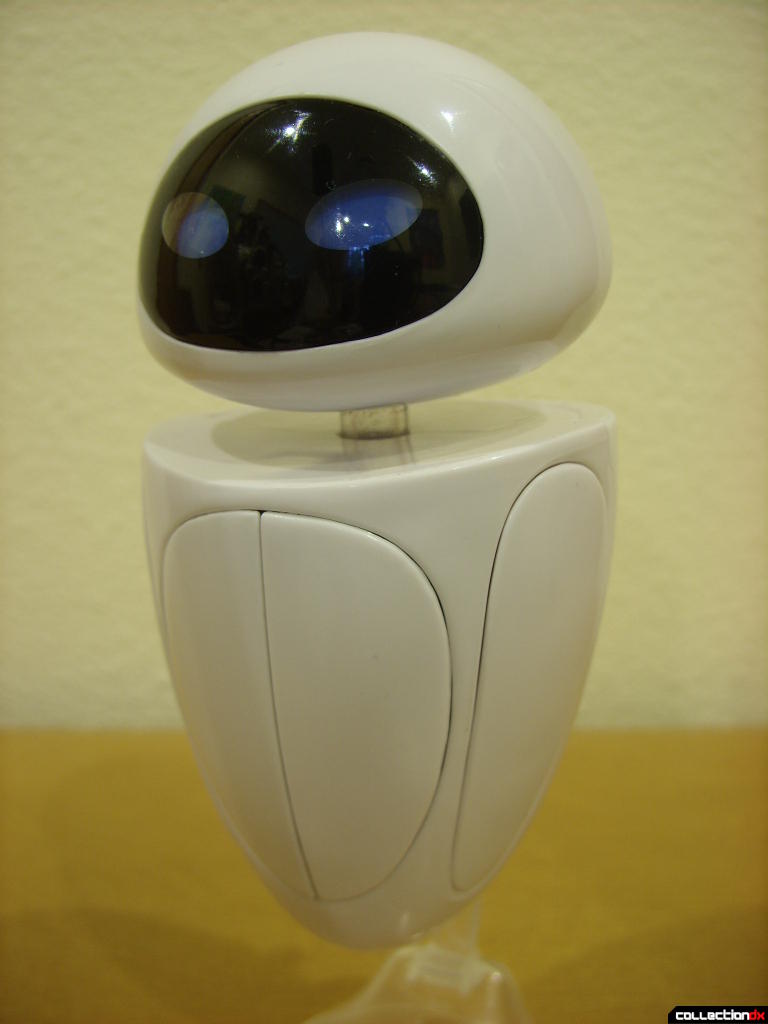 Search ‘N Protect EVE (back) is a stretched-egg shape which is about 4½” (10.57cm) tall and 2 3/8” (6cm) in diameter. Like her on-screen counterpart, EVE cannot balance upright on her own, so a transparent-ABS display stand is included, which elevates her up about 1½” off a flat surface. The stand comes pre-assembled, but can split into two parts if too much pressure is applied to the immovable joint. The peg on the end of the stand fits quite snugly into the lower part of her chassis. (You actually have to fight to take it out or put it in, but be patient and don’t force it because the plastic clearly isn’t designed to handle too much pressure!)

Amazingly, this toy features no visible screws or bolts holding it together, so EVE and all of her accessories more closely match how they appear in the movie. (Bonus points to Thinkway Toys for no visible screws while keeping everything comfortably fit together!) However, whether you’re a stickler for detail like this or not, the very-subtle detailed machinery appearing in her neck and arm sockets are not represented here. (Again, they’re hard to see even in the movie, so that they’re not represented here, I think, was a good thing.) EVE features poseability almost identical to what she displays in the movie, and her proportions are spot-on as well. Her head can twist left and right very easily all the way around, but she can’t look up or down. A thin transparent tube keeps her head attached to her body, helping to maintain the idea that it’s just floating there like in the movie. Unfortunately, her head cannot retract all the way to her body to resemble her Sleep Mode; this is as far as you can get to that. Her retracted arms can be extended by gently applying pressure to the top or bottom of them, and they’ll slip out easily enough. Again, transparent ABS plastic is used at the shoulders to keep the arms attached even though- again- they float in place in the movie. Each fin/arm is made of two pieces, but the four-finger hands are not represented here in any way. The shoulders are double-jointed, and can twist both forward/backwards easily, but pitch outwards only about 35° at max regardless of how they twist. Her shoulders with friction only; there is no ratcheting involved, thus making construction and functionality easier to produce. 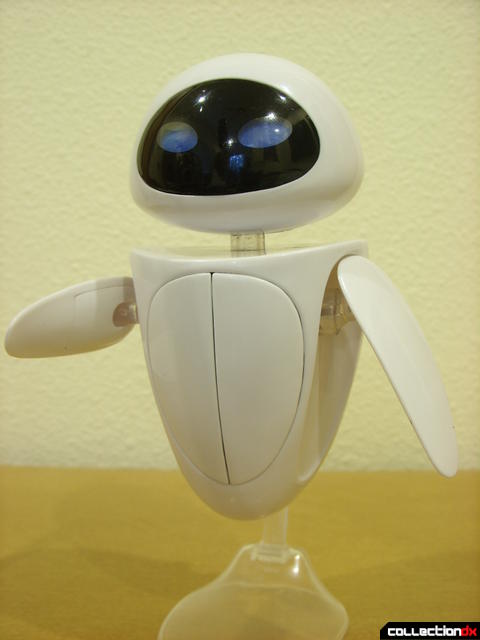 Because her arms are obviously way too thin to contain her plasma cannon, Thinkway Toys provides a spare ABS/PVC equivalent which can snap-fit into the same shoulder socket. This spare arm has some more-intentional seam lines, and so you can now see her fingers there, though again nothing on the cannon arm can move. The same limits on poseability apply to the cannon arm. 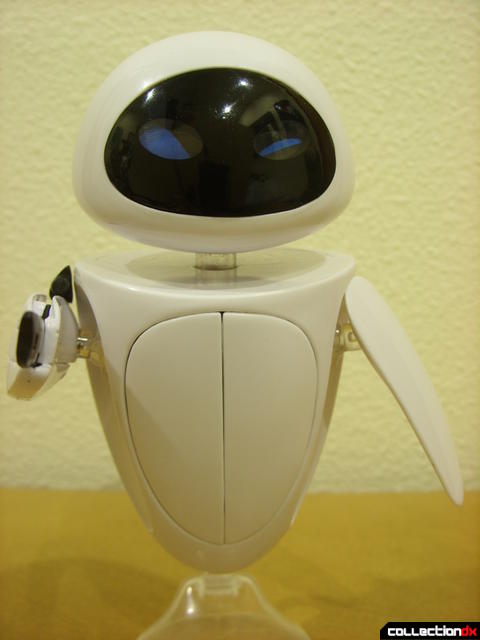 Though the accessory arm can’t shoot blue balls of plasma, an all-ABS rock formation is provided with the set. When the button on the one side is pressed, a pre-molded chunk of the rock gets ‘blown away’! (Kudos for making molten dripping rock-slag along the surviving section of the rock. Awesome, that.) 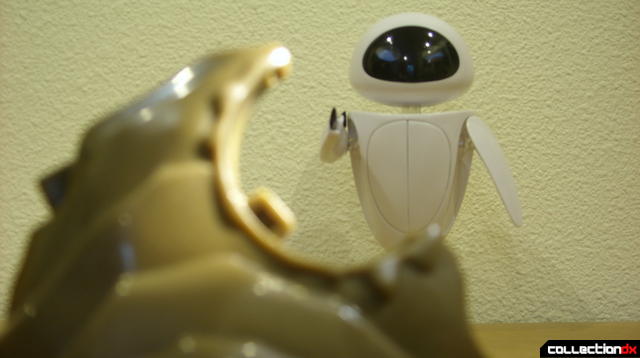 In the movie as EVE takes shelter from an armada storm in WALL•E’s truck, he starts showing her parts of his collection of junk. One of the items he shows her is a light bulb, which- when she holds it- lights up to the surprise of both! A small solid ABS light bulb is provided with the set, and it can be fitted over the tip of either of EVE’s arms! (Again, the toy doesn’t have poseable fingers, so this is really the next-best option.) 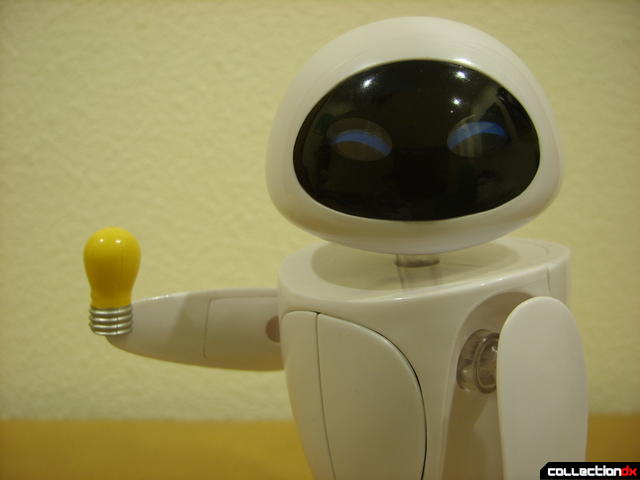 As WALL•E continues to show EVE his collection, he shows her a small plant that he had found a few days earlier. Unfortunately, this is the very thing that EVE has spent all this time scanning the region for. And so, EVE immediately opens up her chassis, uses a capture field to snatch the plant from WALL•E’s grip and place it inside herself, and then immediately goes into Sleep Mode- activating a beacon for the probe ship to fetch her back to the Axiom. Of course, WALL•E knows nothing of this... 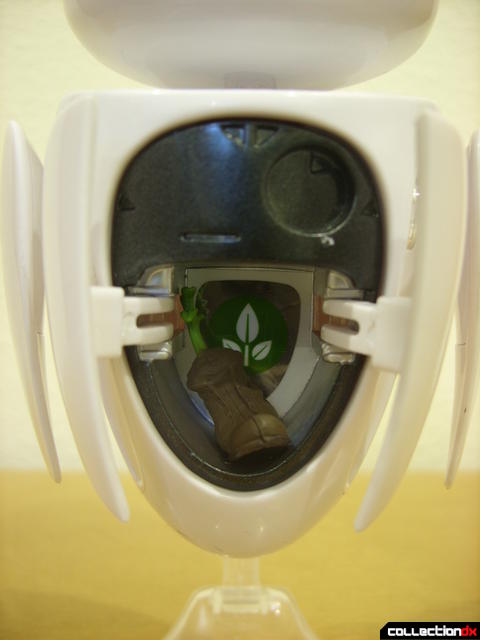 EVE’s internal sample storage bay is represented here as well. On her back, just above the display stands’ mounting hole is a transparent-ABS peg that, when pressed inwards, pushes open the front of her body to reveal the storage bay! Inside is a pre-applied decal showing the plant symbol also seen in the movie, and the exterior of the bay is painted dark metallic gray, with a few molded-in surface details. Then, you can take the provided PVC boot and place it within her, and close up the doors again by manually pressing them together and then sliding them backwards. The functions of the storage bay do not impact how the shoulders move about either (which is good since that does not restrict posing options). That I am aware of, the doors are held in place by simple pegs inside, so if forced they will pop-off, but I think that the extending arms would break before then. (In other words, don’t try to remove the doors!)

The other feature is less complicated and even more interactive. When you press down on her head, EVE’s eye expressions change! There are six expressions in all. 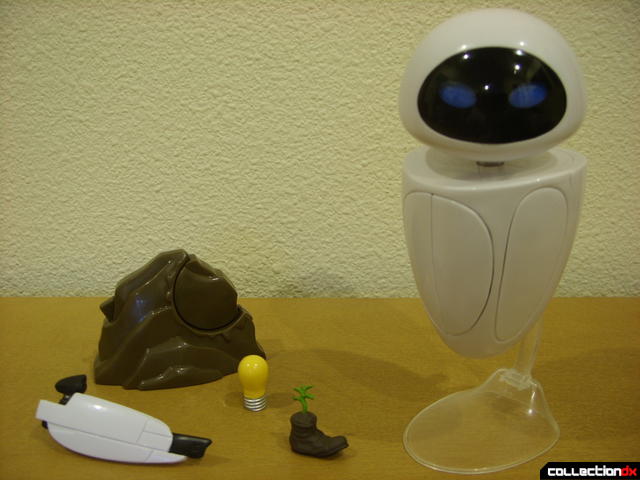 I’ll come right out and say it- I don’t think that Thinkway Toys could have done any better. I truly believe this to be a near-perfect toy representation of the character from the movie! Perhaps the only thing that stands in the way of true perfection would have been not having her head tilt up/down, or the arms not being able to extend to 90° horizontally. If she could have done that, I would have been truly speechless in my praise. As it is, I am amazed how well this toy turned out! That they were able to eliminate all visible signs of screws or pegs or tabs holding all of it together is fantastic, and fully preserves her polished look from the film. Additionally, having arms that both extend- and then turning around and providing an accessory cannon arm- was top notch. (I suspect that, in time, moving the shoulders in/out and around will eventually wear away at the friction joints, and then the arms will droop more and more, particularly with the cannon arm...) the exploding rock was also a great idea; it’s design is simple, but it gets the point across! The light bulb was obviously such an important symbol to both her and WALL•E in the movie that they provided one here, which I also thought was really nice. Having a fully-functional storage bay was cool with the peg opening it in back, but then to add a boot that could actually fit in there was equally cool. Am I disappointed that her fingers were not represented in some way? No. To do that would have meant providing an extra set of replaceable arms, and I think that would have been truly unnecessary. Having the standard wide-eyes look is standard on many other toys of this character, but to have them change automatically from within is amazing! Am I disappointed that her eyes can’t go blank, and she can’t assume Sleep Mode? Ehhh... a little, but I am very pleased with the way this feature turned out. There is one accessory I am surprised that was not included here, and that is the red shoe that was placed on her for most of the movie when she was taken to the repair facility in the Axiom. (But I can see how that might have been tricky to accomplish and not tarnish the smooth finish of the toy, so I am glad that it was not included even if it is missed...) The other good thing about this set is that it’s completely to-scale with the likes of U-Repair WALL•E, so acting out scenes from the movie are completely possible. And really, that was one of the big reasons I chose this set over others of her- she was in-scale with a WALL•E figure that I already really liked, and she came with relevant accessories & features. ...And all of this in a small set that costs only $15.00! Search ‘N Protect EVE does not miss one beat- not a single one, I tell ya- and so I am strongly recommending that you get one. You’ll come to adore her as much as WALL•E does!

(Had I owned one of these before December, I would easily have nominated it for CDX’s 2008 X-mas shopping wish list...!)

Great review. Seems rare to have such a high level of quality/functionality for Disney movie tie-ins.

I love the light bulb..

I'm usually not too much into most of the Wall-E stuff, but this actually looks like a damn cool toy.

Great review, and congrats on finding one of these!