Recently, Wal-Mart has begun to carry low-priced dvd's in their toy section. Included among the classic cartoons such as popeye and Kimba, are some odd looking Super Robot dvd's. The three I found were:

At first they look like your standard super robot fare, but upon closer inspection, something is not right. Is that Mazinger's head on the body of Sakan-oh, Colored like a RX-78 Gundam? That red robot looks just like Inferno, the Transformer Fire truck. And why is the Mazinger-like robot fighting a red version of Raideen?

Come to find out, these are Korean Anime. Very popular in their native land, these movies were brought over and poorly dubbed and being sold for $1 each at your local Wal-Mart. As loyal CollectionDX readers know, Korean toys have borrowed liberally from the Japanese, so it is only natural that their anime would too. The characters are taken from a multitude of shows and mashed up in some kind of weird hallucinogenic robot nightmare.

These are bad, but in a "so bad it's good" kind of way. The voice acting is done by one person I think. The plot makes no sense whatsoever. Parts from other movies are spliced in with no effort to try to fit in. The average joe will likely throw these in the trash and head immediately to counseling. But to the Japanese toy fan, these movies are a fascinating train wreck. Watching characters you know and love jammed together with know rhyme or reason, trying to place what was stolen for what, it's just awesome. Watch this with some friends and give it the MST3k treatment.

I'm going to try to walk you through some of these. The plot makes little to no sense, but what the hell, you have to see this.

We'll start right off with the craziest one, Space Thunder Kids: 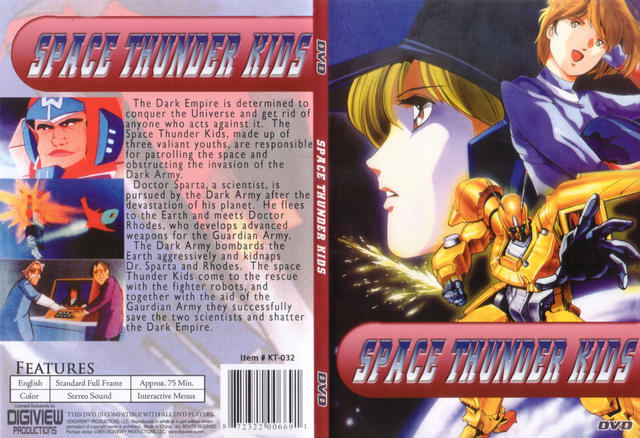 "The Dark Empire is determined to conquer the Universe and get rid of anyone who acts against it. The Space Thunder Kids, made up of three valiant youths, are responsible for patrolling space and obstructing the invasion of the Dark Army.

Doctor Sparta, a scientist, is pursued by the Dark Army after the devastation of his planet. He flees to the Earth and meets Doctor Rhodes, who develops advanced weapons for the Guardian Army.

The Dark Army bombards the Earth aggressively and kidnaps Dr. Sparta and Rhodes. The Space Thunder Kids come to the rescue with the fighter robots, and together with the aid of the Guardian Army, the Successfully save the two scientists and shatter the Dark Empire."

Of course, If any of this happened in the movie, I have no idea. 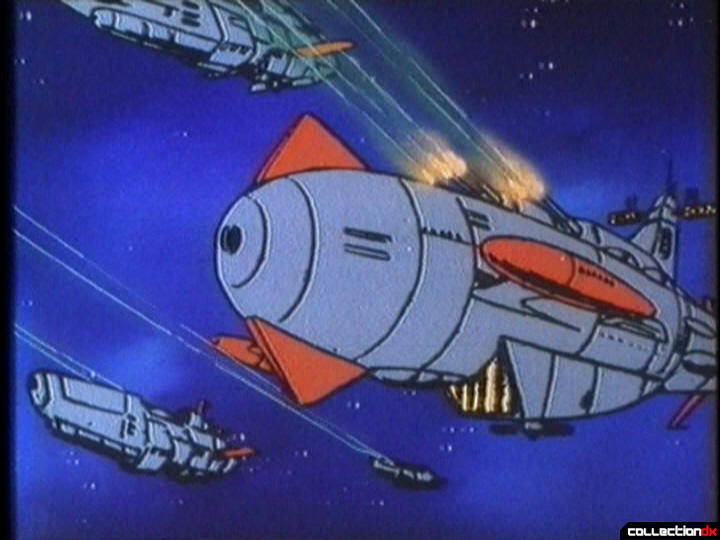 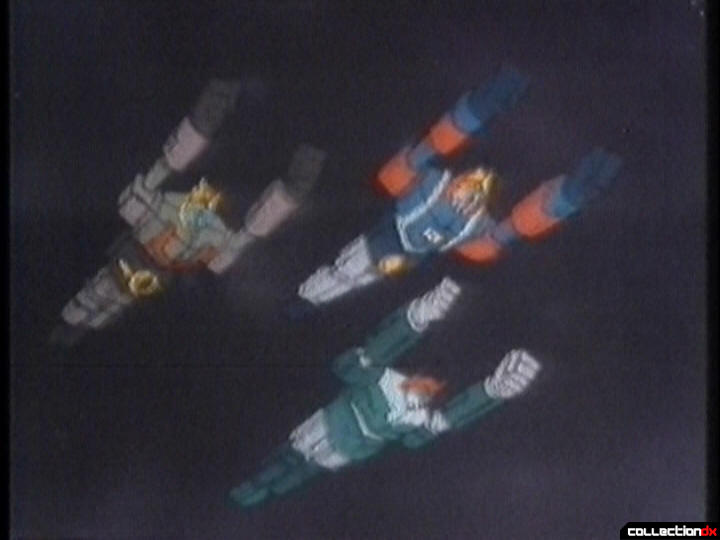 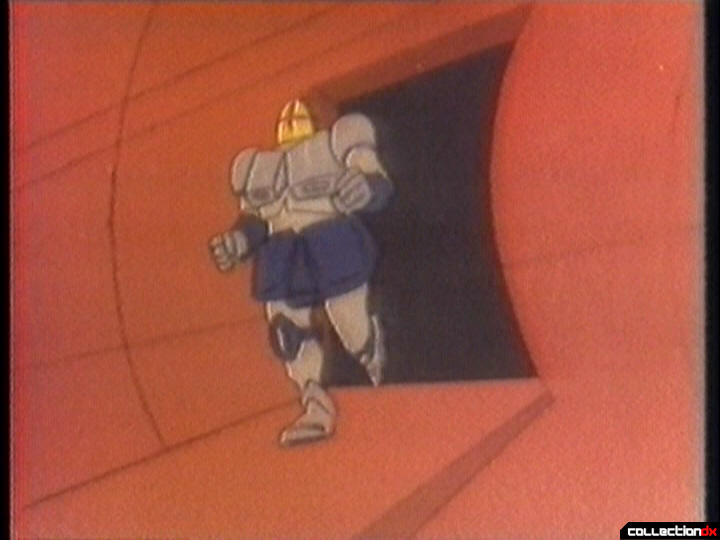 Look, it's a Gyan from Mobile Suit Gundam. 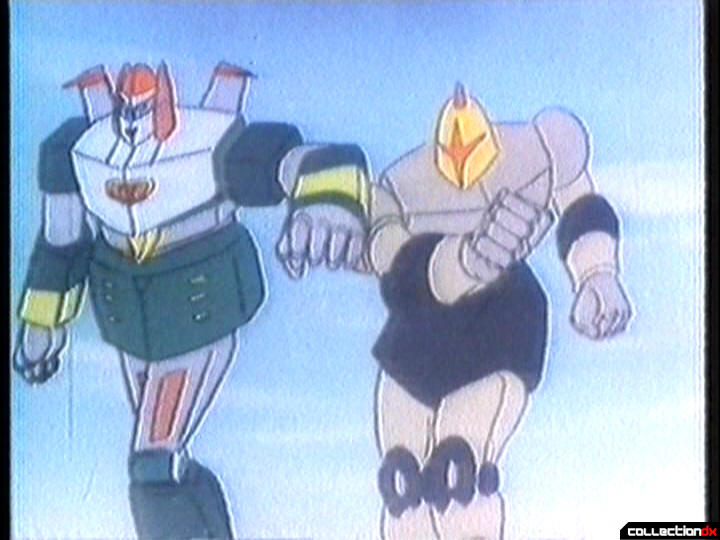 Gyan giving the smack down to someone who looks like they're from Gingaizer. 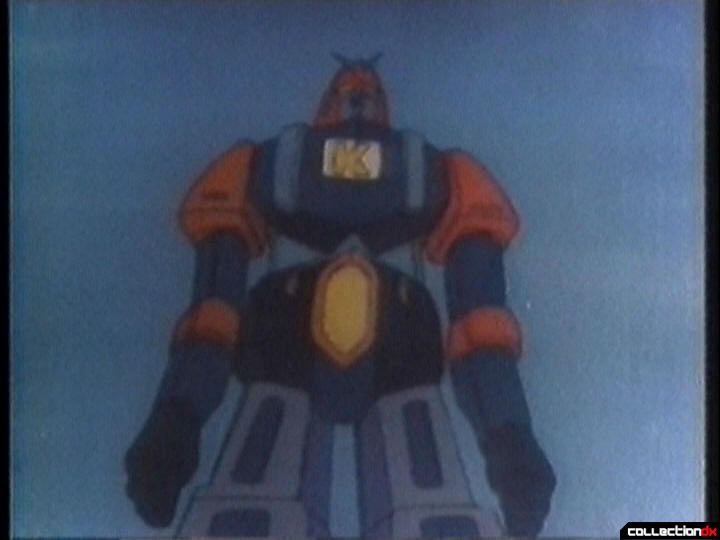 And then, for no apparent reason, Daidenjin. 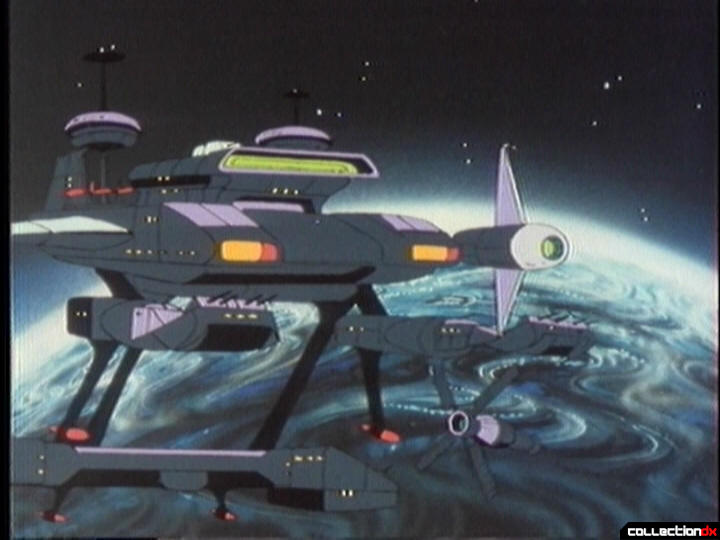 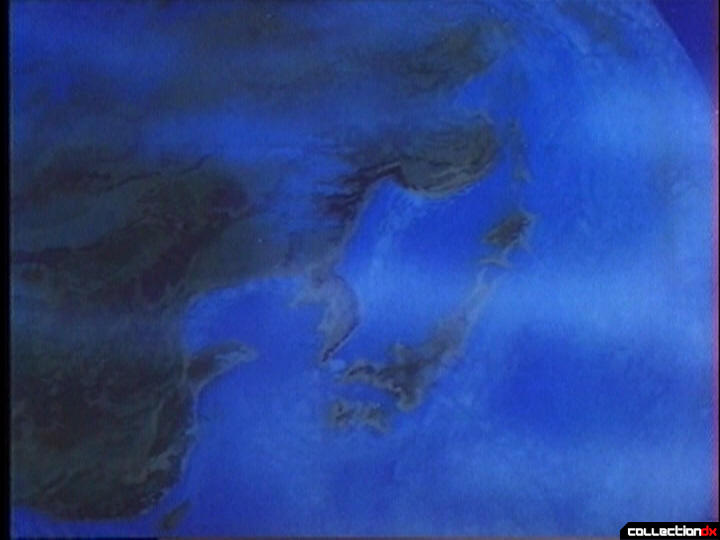 If there was any doubt, I give you exhibit A: Korea. 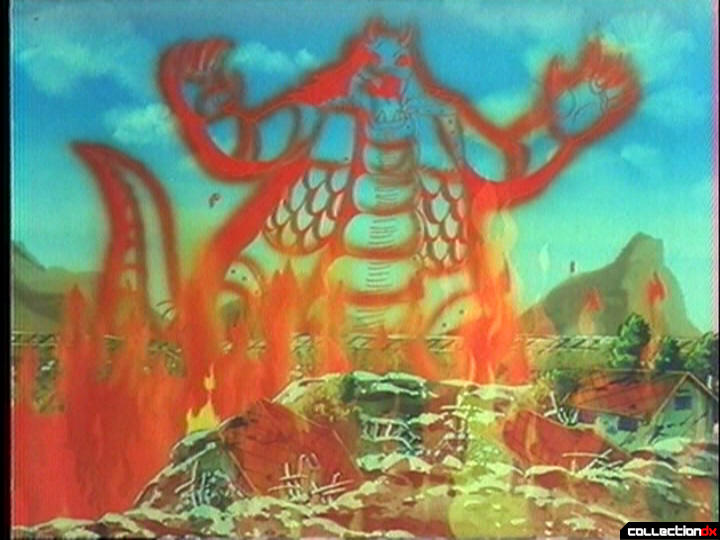 This guy's special power was the ability to blink in and out every other frame. 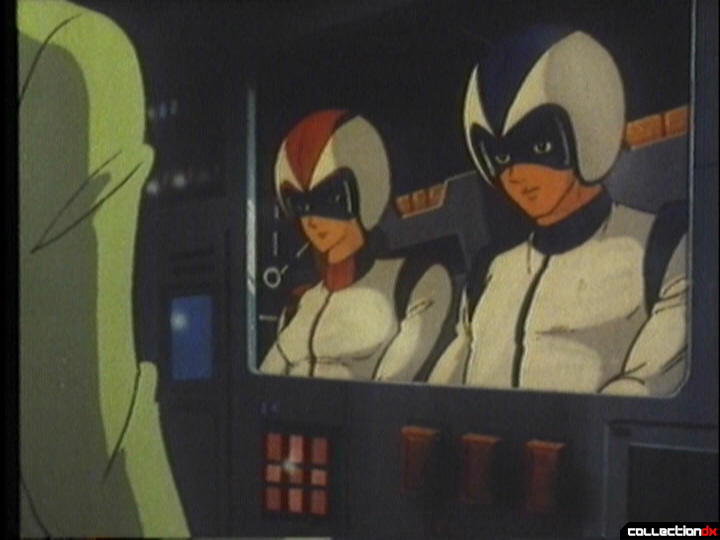 I present to you, the Space Thunder Kids, appearing in about 10% of this movie. Starvengers (Getter Robo G) anyone? 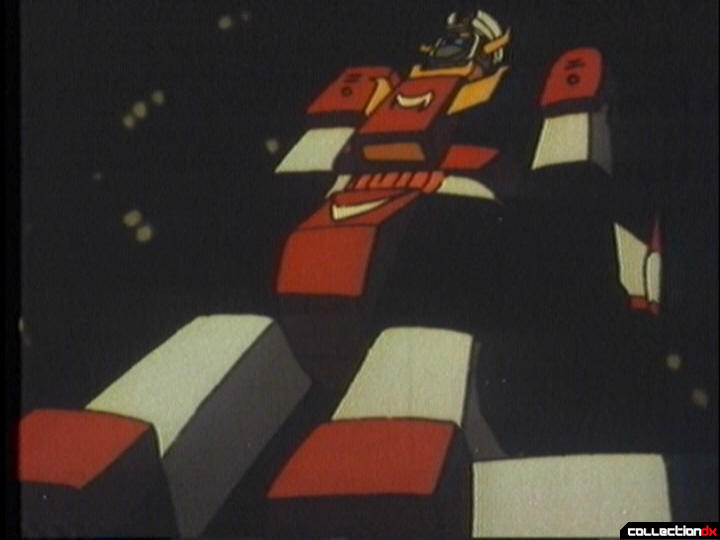 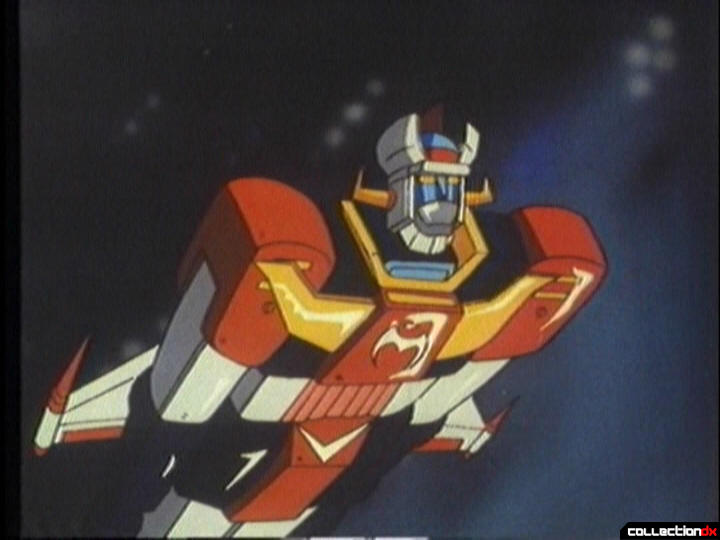 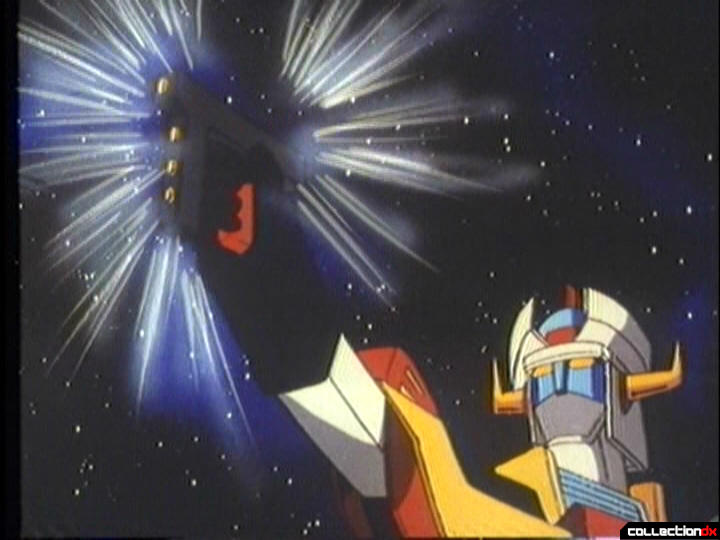 Then, for some reason, they spliced in footage from "Protector of Universe", featuring a battle between the mazinger clone and the Raideen Clone.

From there, we jump to scenes from Defenders of Space, with NO EXPLANATION WHATSOEVER.

You're just going to read the Defenders of Space review, to see what this is all about.

And now, in one of the biggest shock surprises ever to grace the screen, more so than the secret ending to The Sixth Sense, I bring you: 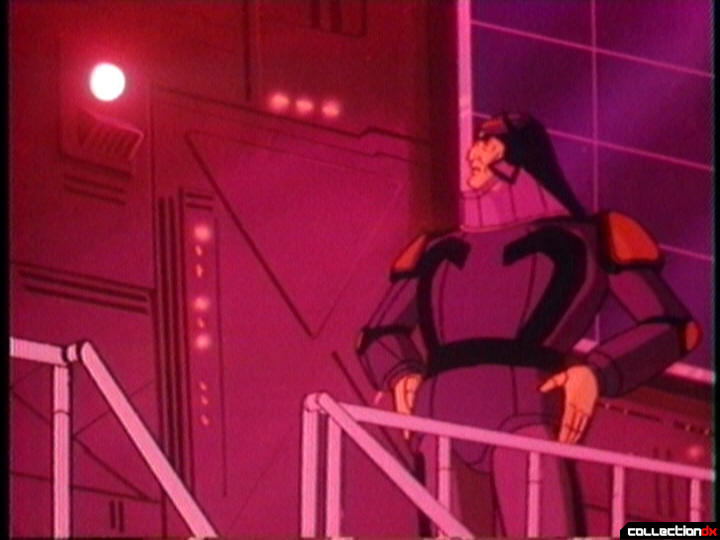 Animated TRON clone! This has to be seen to be believed. 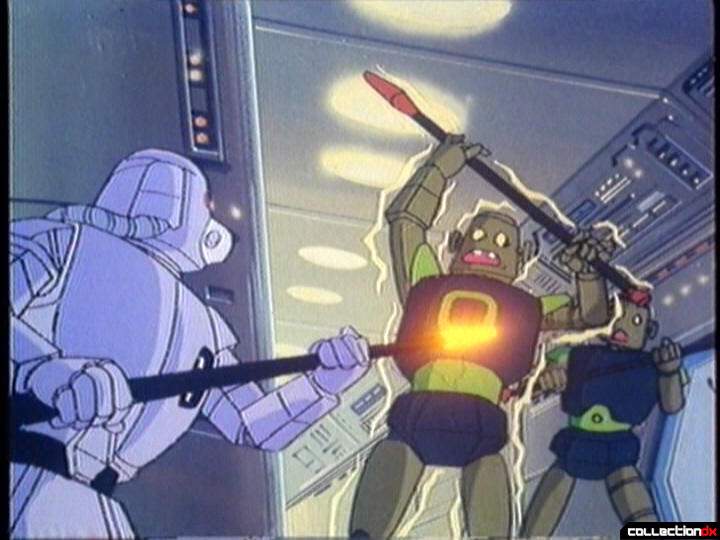 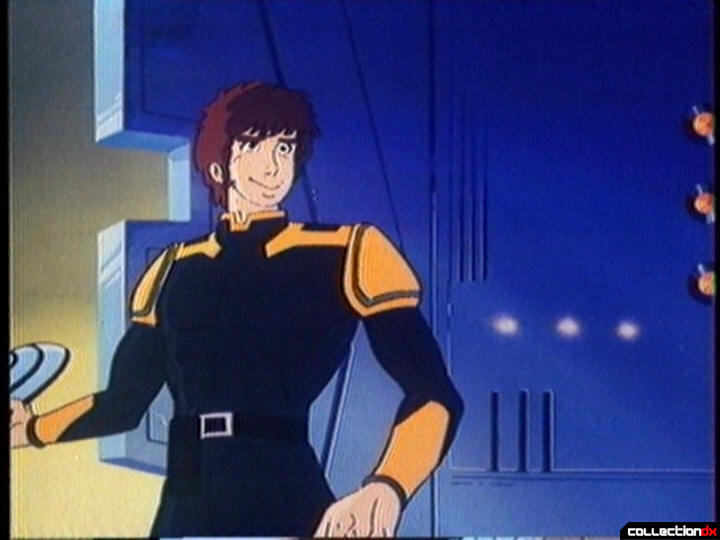 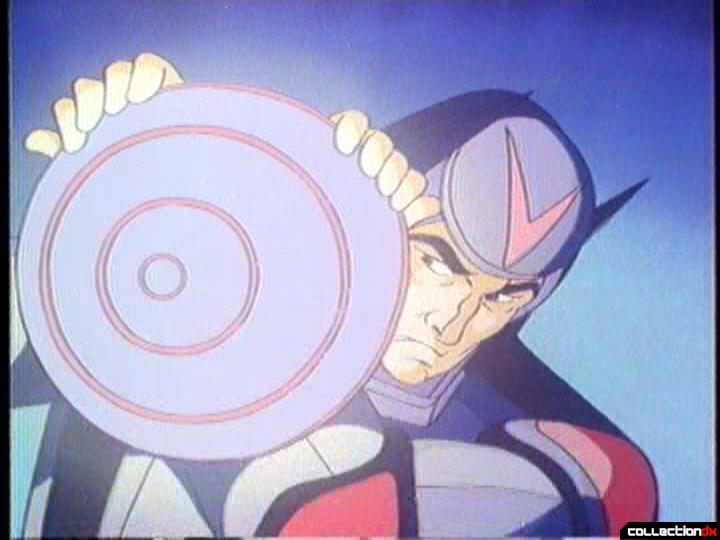 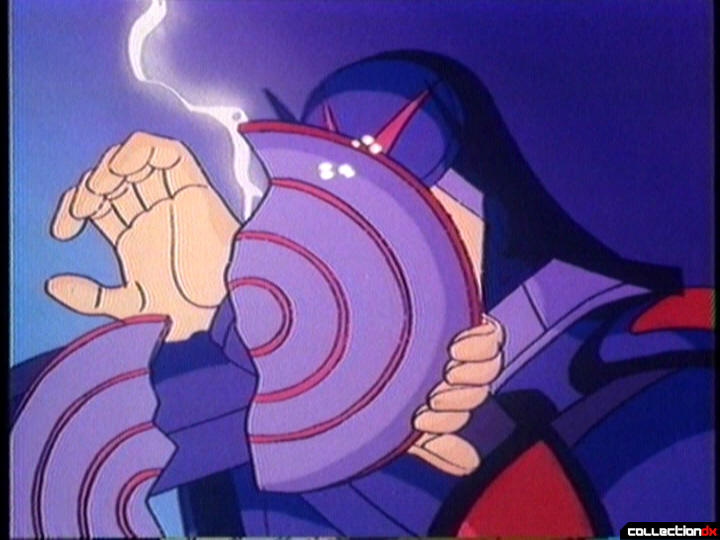 Complete with the Sark like guy getting his disc smashed in half. He de-rezzes after this, but is not resurrected as a giant. 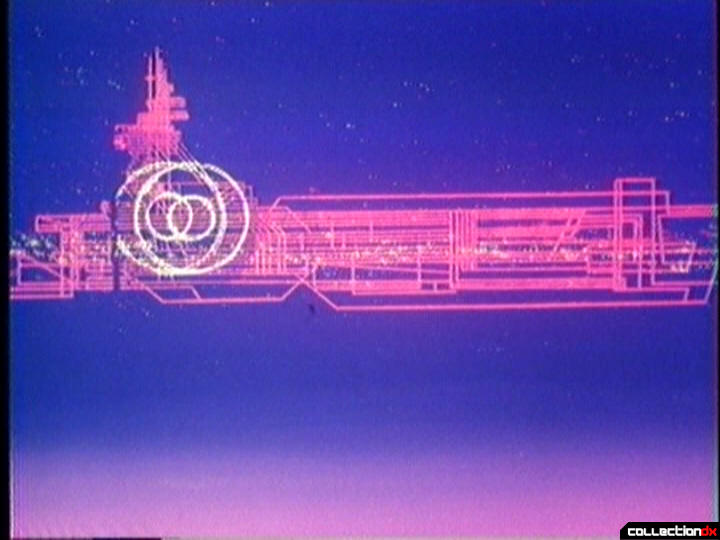 Her name is Sheila, Sheila the pirate. 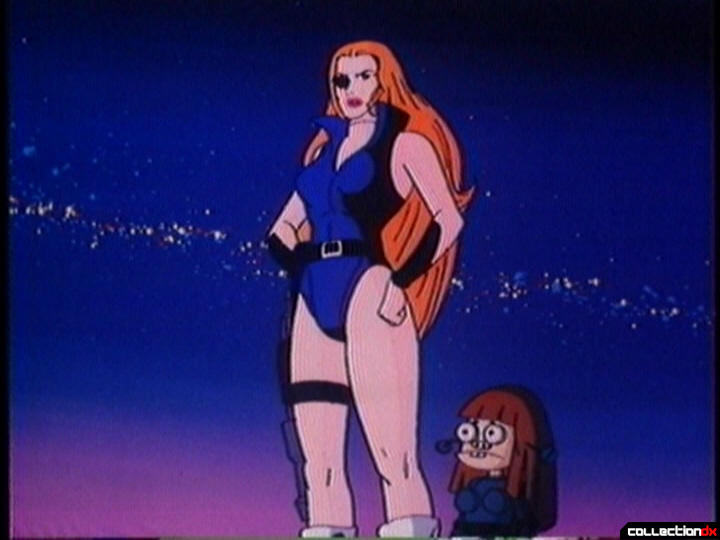 That thing next to her is her sister. 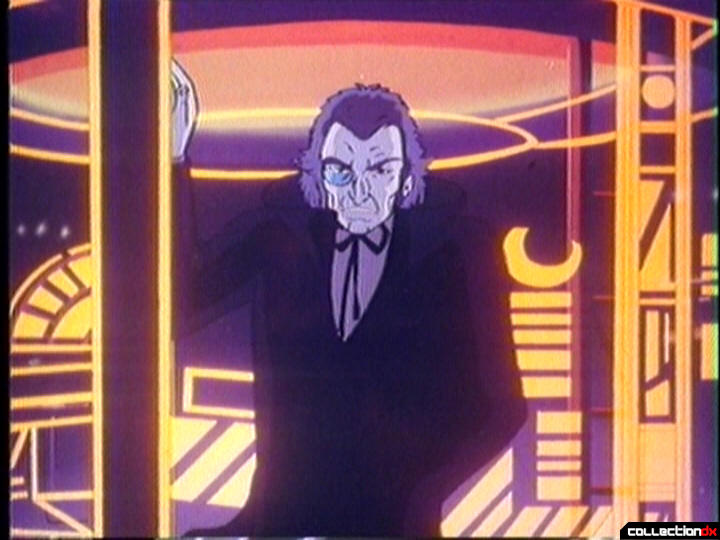 Didn't believe me before? It's now Tron, and none of this makes any sense. If you made it this far into the movie, go get drunk. 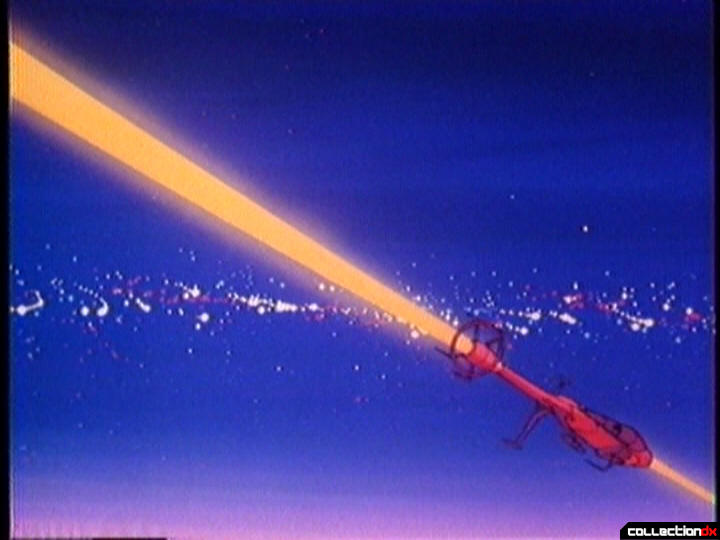 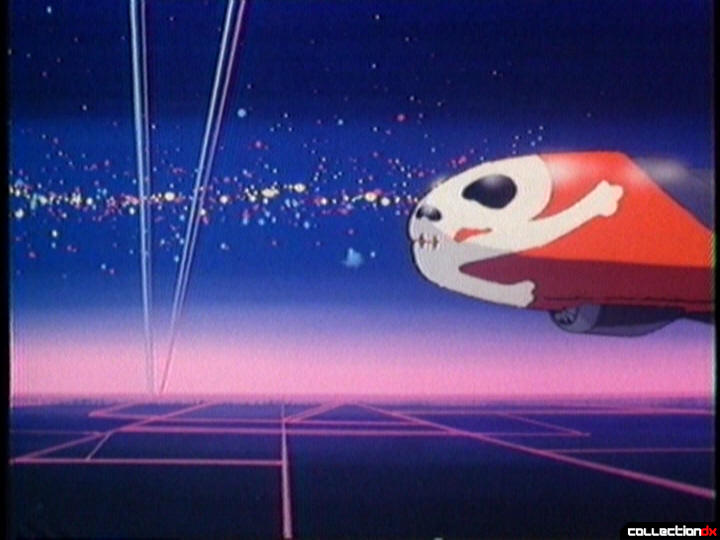 You don't get a good look at it, but that's Sheila's ship, and it's pretty much Captain Harlock's Arcadia. 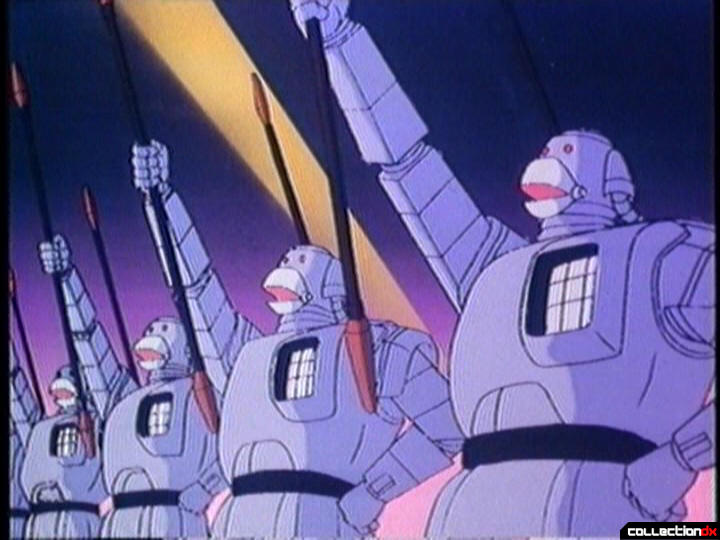 WHERE IS YOUR GOD NOW? 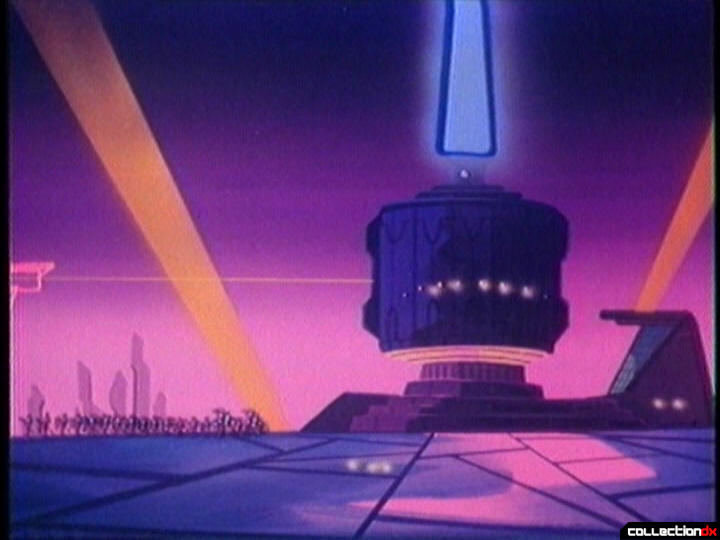 Even monkey robots need a MCP. 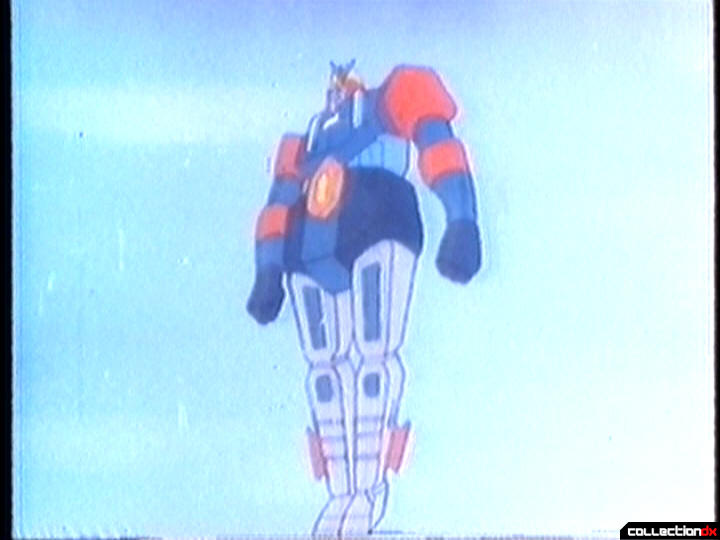 Then, it's back to the crappy animation with Daidenjin 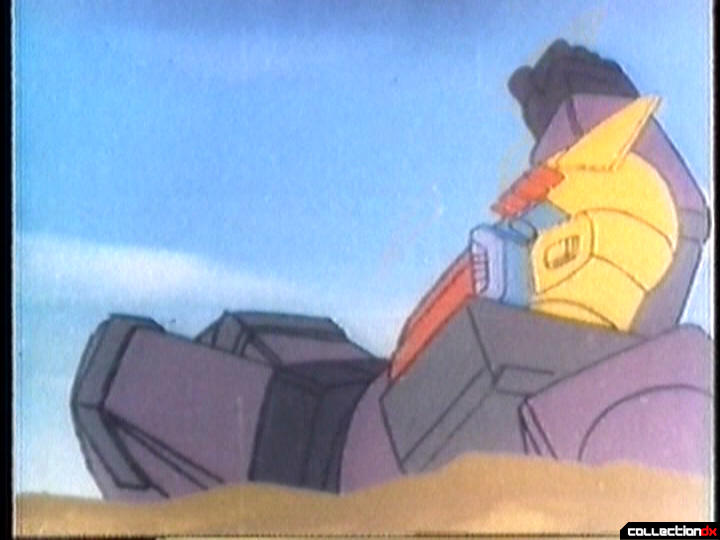 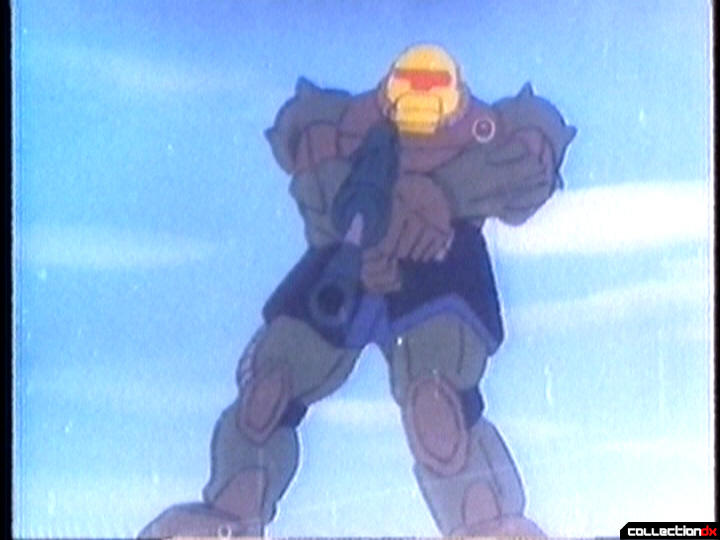 A Zaku, because this isn't messed up enough. 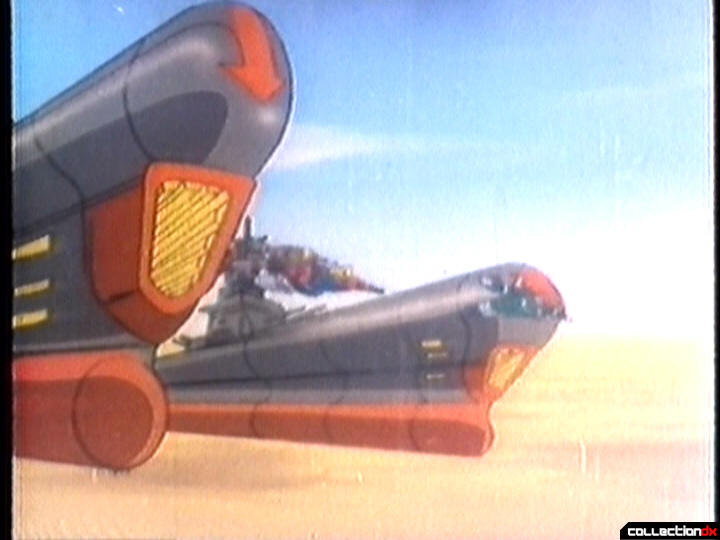 To end it off, we have some Yamato clones. I have no idea what happened at the end.

In case you lost track, here's a quick list of things ripped off in this movie:

This movie is truly something. I'll be reviewing the next two shortly, so keep an eye out on the insanity.

I have a headache.