Protectors of Universe is another great Korean anime flick released from Digiview productions, available at Wal-Mart for the unbelievable bargain price of ONE DOLLAR. Let me tell you, this is worth every penny.

The story, like the previous anime Space Thunder Kids, makes little sense. Trying to sit through this is so painful; you want to stick a power drill in your ear after about 10 minutes of it. The animation is marginally better than in Space Thunder Kids, and this is one feature film, instead of many films mashed into one. If you didn't have to actually listen to it, it wouldn't be half bad. But the film is dubbed by one guy who has a marginal grasp of the English language. He has so little emotion in his voice; he makes Ben Stein seem like Robin Williams.

The plot, if you can call it that, goes something like this. Keep in mind; this is the actual text on the back of the box:

"In the far reach of space, a new star evokes. At that very moment, a horrible roaring sweeps across the universe. This sudden roaring, like a helpless howling, breaks the peace of the universe.

Antarichi, a planet of peace and perfection, is overtaken by a greedy bionic human Alfred. Opposing the belief of his creator Casiofia, he attempts to conquer the Universe. His first step is to destroy the city Orion.

Kanann, King of city Orion, is shocked by the sudden attempt of the new born star. He finds no way to combat so he sends out SuperSpeeder to seek help from earth.

A fierce and bloody battle begins. With the reunion of Super Speeder and Mazinger 7 and a group of brave warriors, Alfred if finally defeated. The bionic human is exploded and the colony destroyed. City Orion is rebuilt and Universe is back to peace, Thanks to the Protectors of the Universe."

If that made any sense at all, could you please explain it to me? How exactly does a new star "evoke"? Can you be both bionic and human at the same time? Let's look a little deeper into Defenders of Universe and find out. 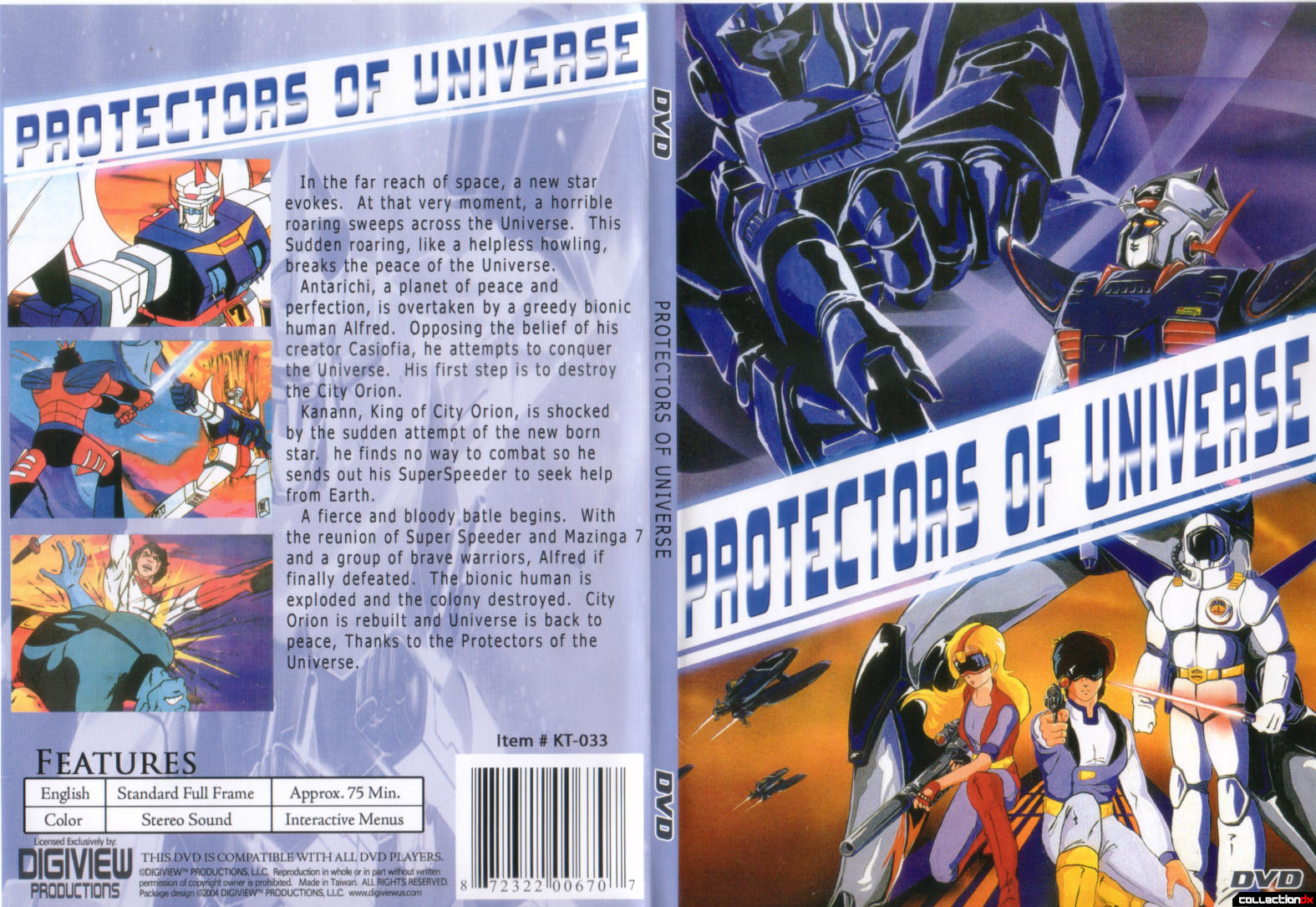 First of all, this is a totally misleading cover. The robots don't look like that, and those three characters appear nowhere in the film. Thye do look familiar though... 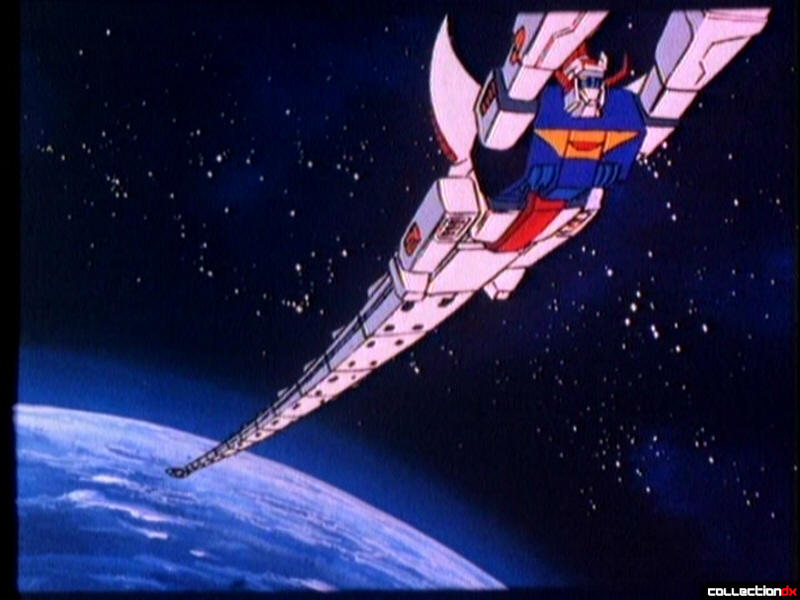 So this is the hero robot, Mazinger 7. Basically, the planet under attack sends him to earth, where a space train is inserted into his ass. The train is full of little kids. Makes perfect sense. Train full kids in robots ass. Meditate on that for a minute. 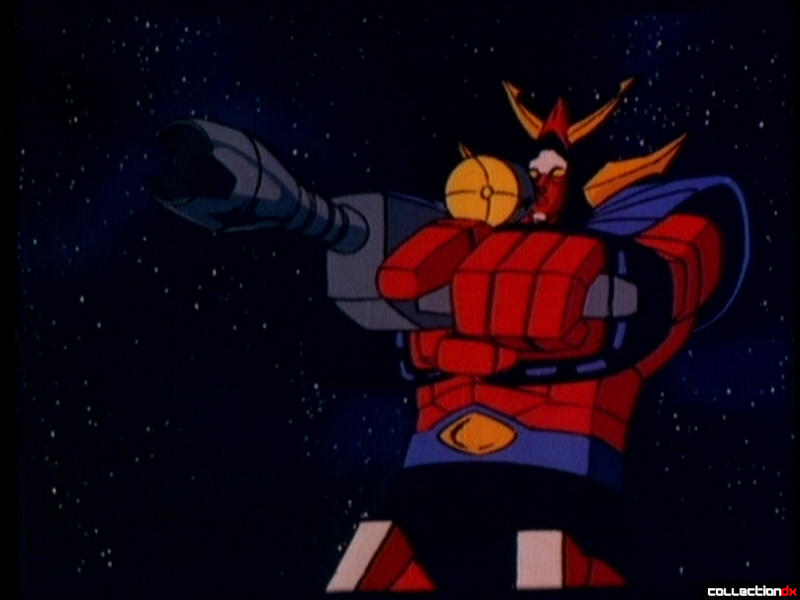 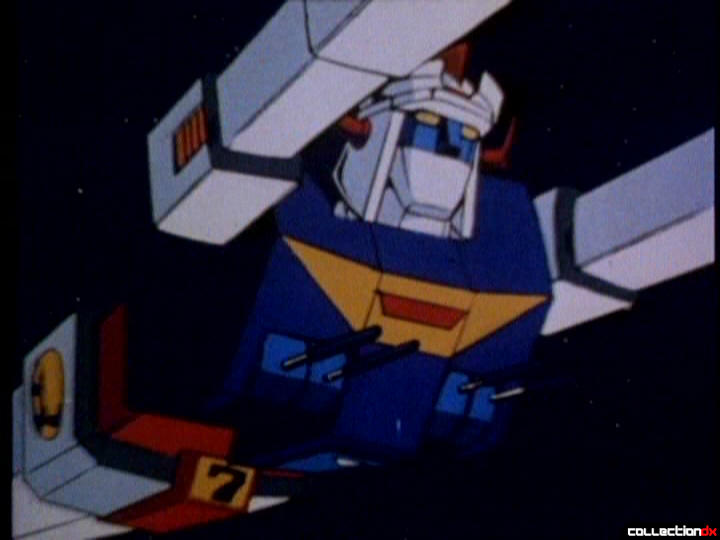 Mazinger 7 is a good mash up of some robots. The head is pretty much a Mazinger / Golion hybrid, with the body of Sakan-Oh. Notice the handy 7 on the belt. That's so you don't accidentally jump into Mazinger 6. 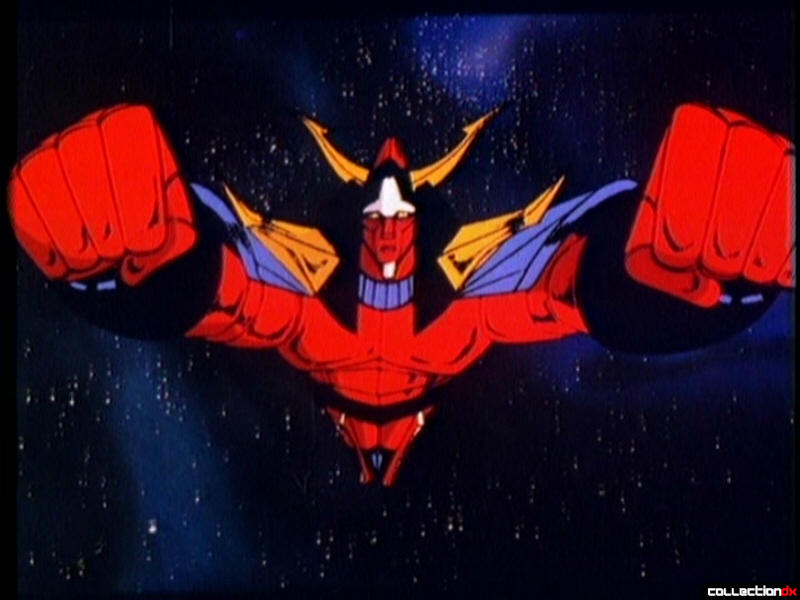 Alfred the bionic human, sends his super robot to confront Mazinger 7. Yes, it's Raideen, only red. I think he looks pretty cool, actually. 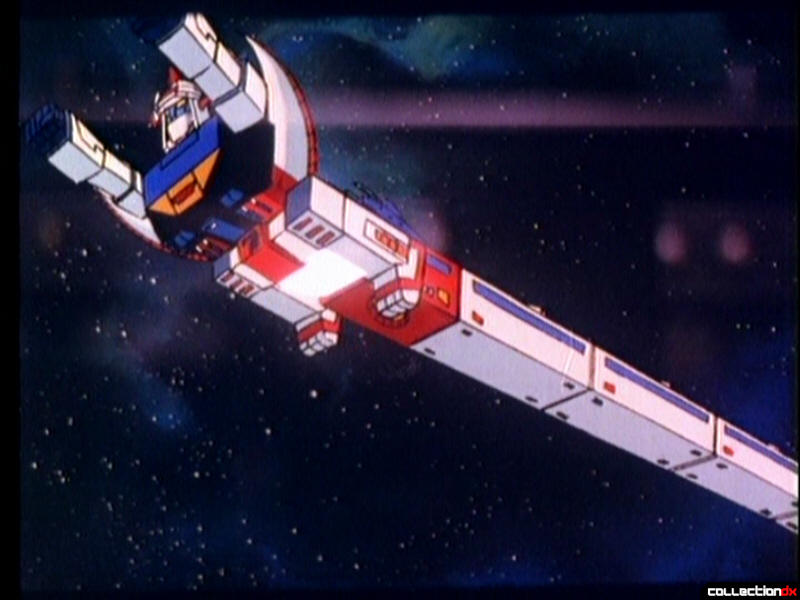 Mazinger 7 takes a deep breath and releases the train from his metallic buttocks. He will fight this fight bow-legged. 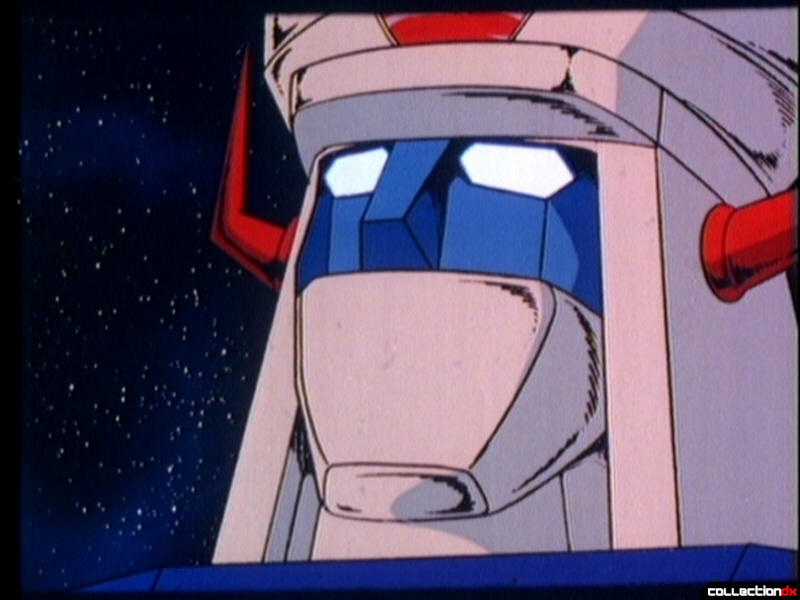 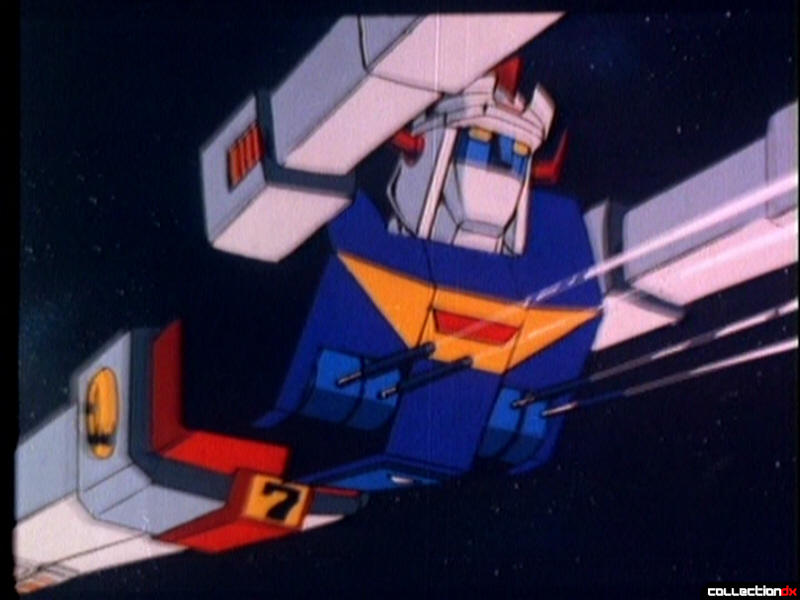 The FauxRaideen (I forget his name in the movie, but does it really matter?) brandishes the first of many weapons. He stole this from a RX-78 Gundam. 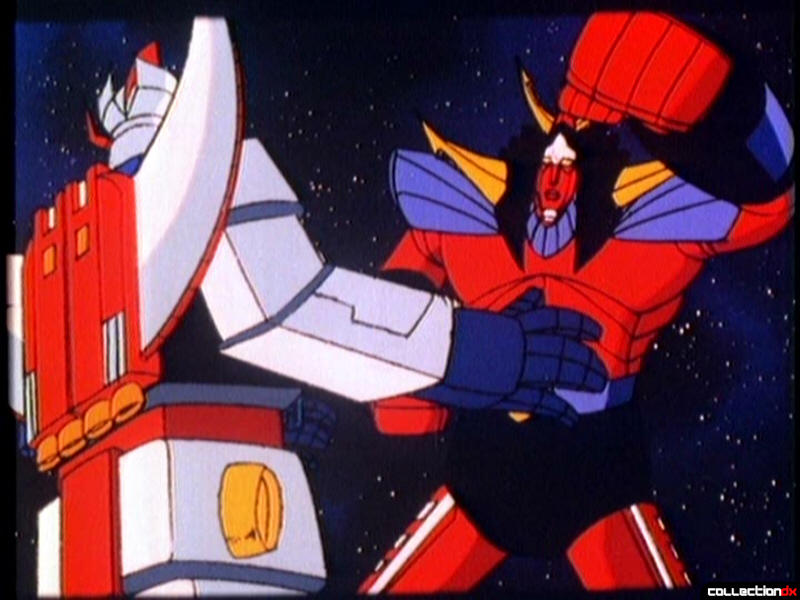 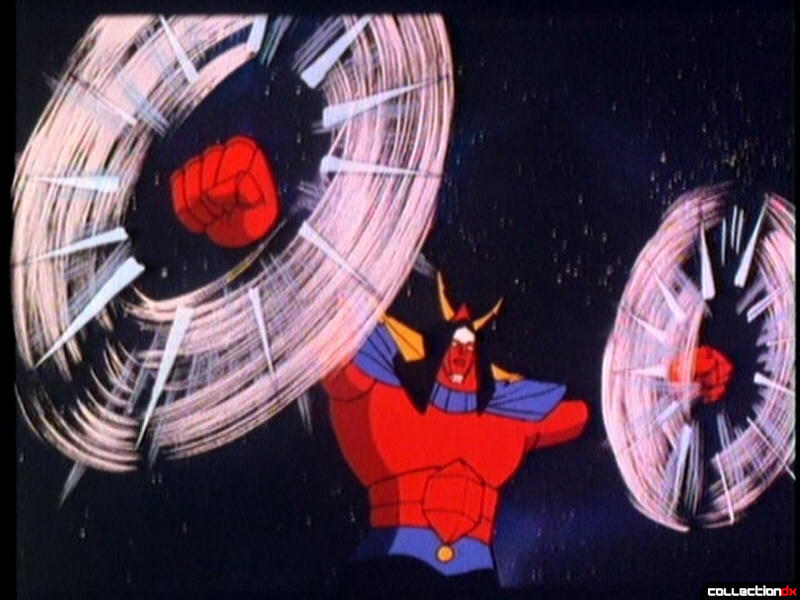 FauxRaideen has some cool spinning spikes. This fight is actually okay. The only honestly good thing on the DVD. 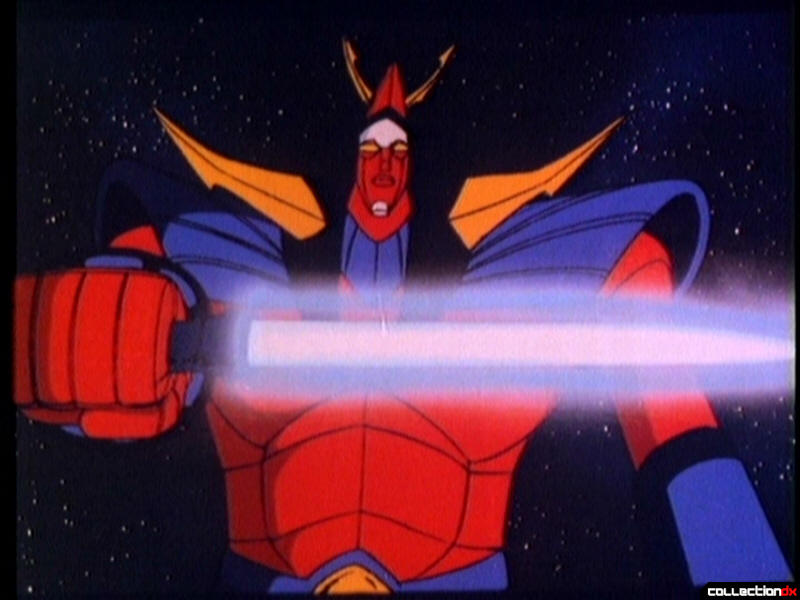 So, the gun didn't work, the spinning blades were junk, why not try a lightsaber? 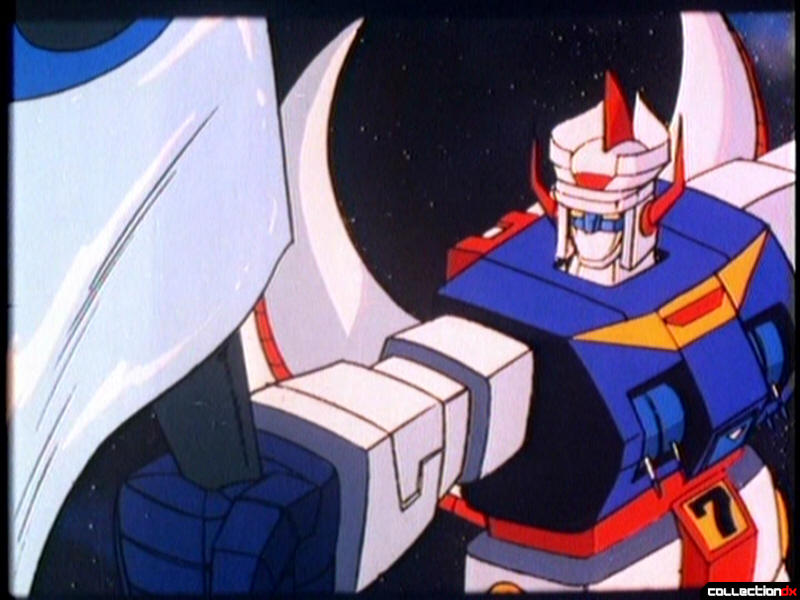 That's not a kinfe, this is a KNIFE. 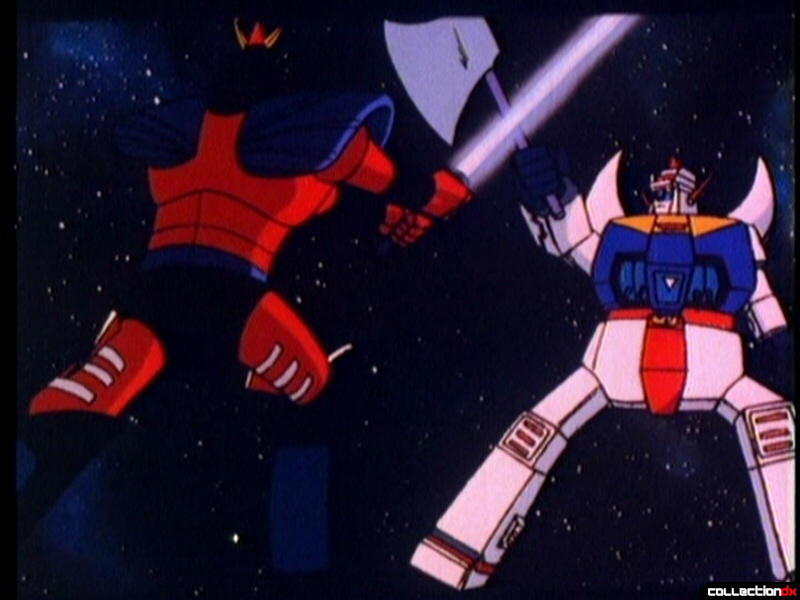 There's that bow-leggedness I was talking about. Honestly, I think the lightsaber would cut that ax in half, but we should realize by now that Korean anime makes no sense. 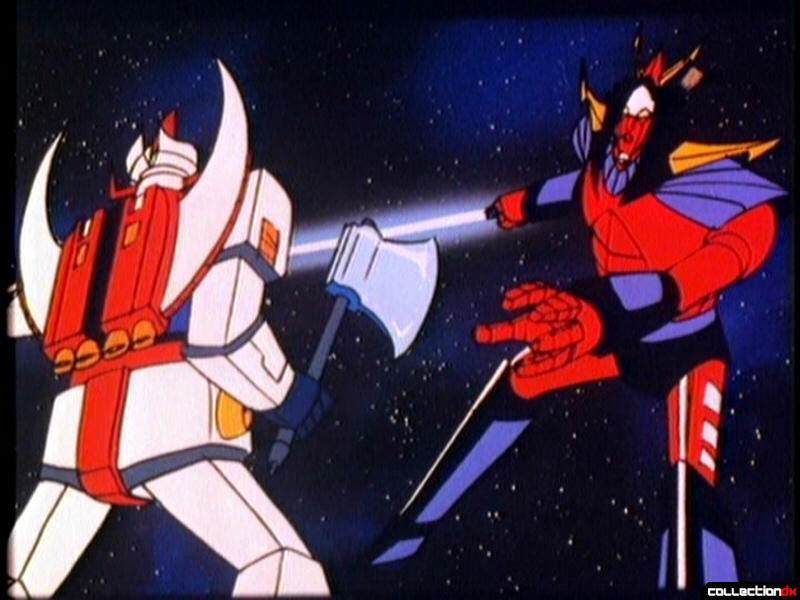 This pose looks so familiar, but I can't place it. It wouldn't suprise me if this was a traced over battle from a Gundam episode. 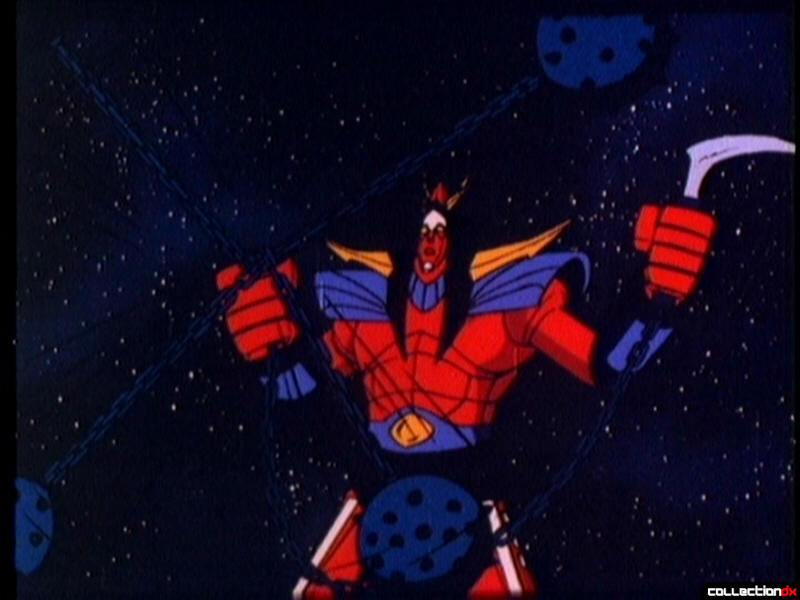 But wait, we have another weapon for FauxRaideen - a spinning ball and chain attack! 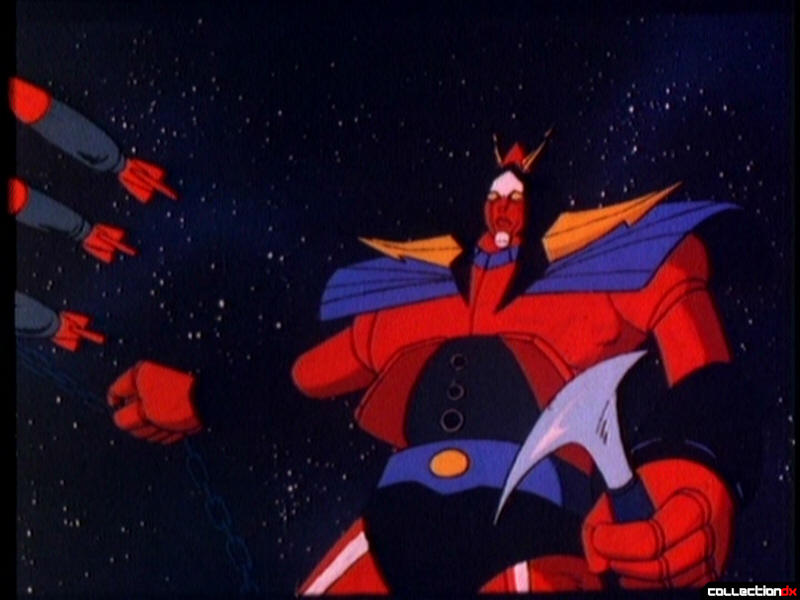 He also fires missiles from his tummy. 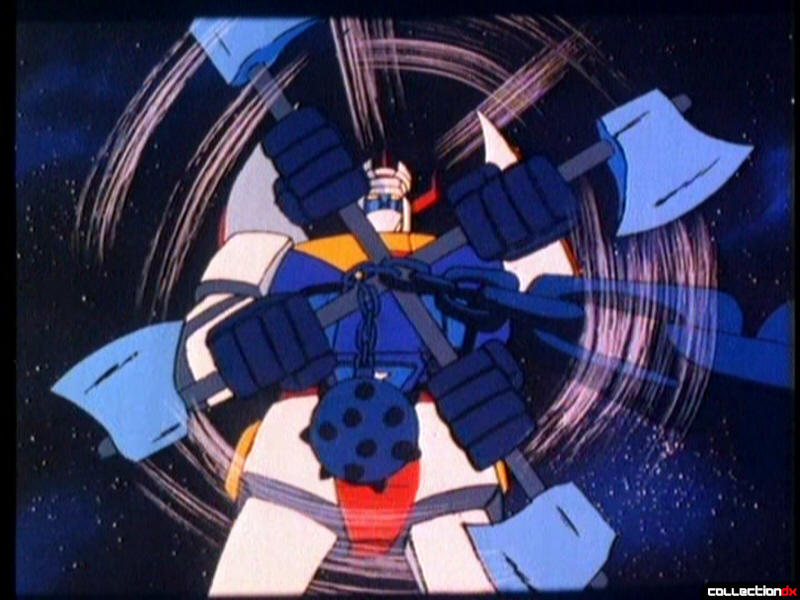 Mazinger 7 uses FauxRaideen's attack as a defense agaist the missiles.

The ax somehow morphs into a trident, and impales the FauxRaideen. 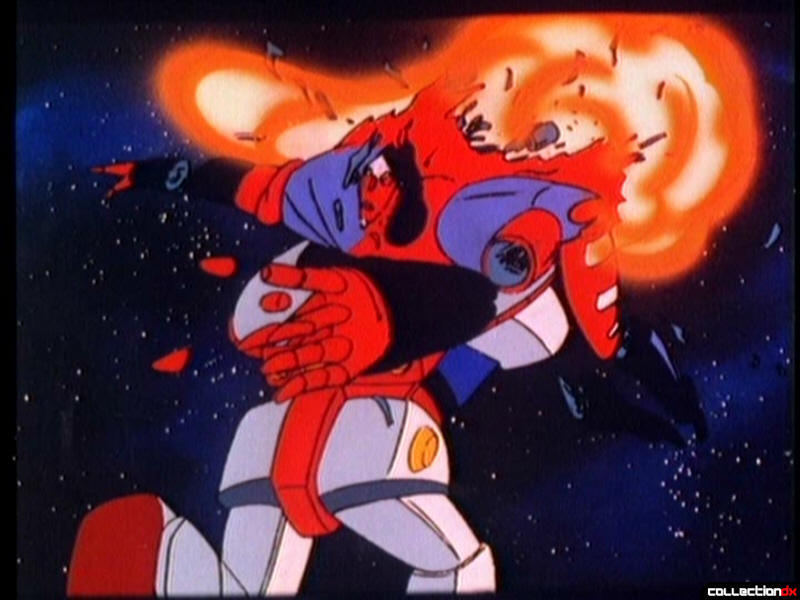 This explosion goes on for what seems like 10 minutes. 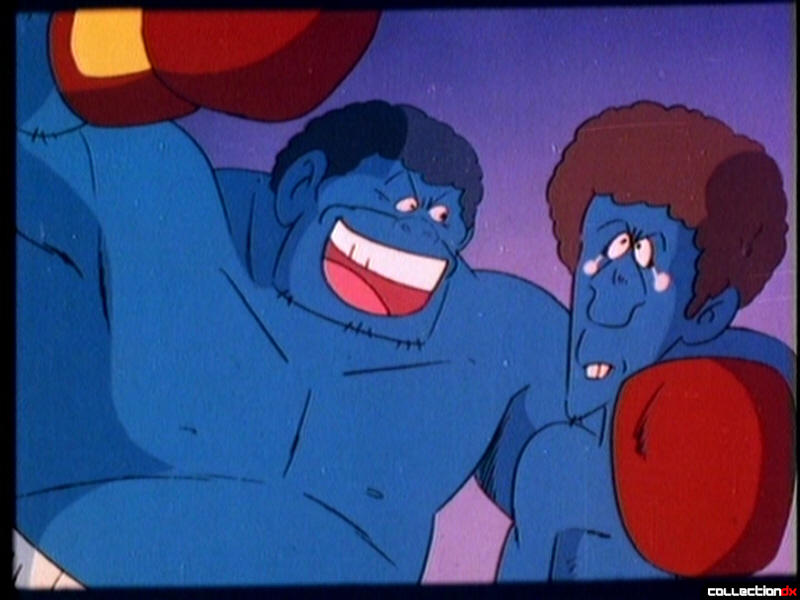 The bad guys are all blue and are very silly. Think of them as out of work smurfs on steroids. 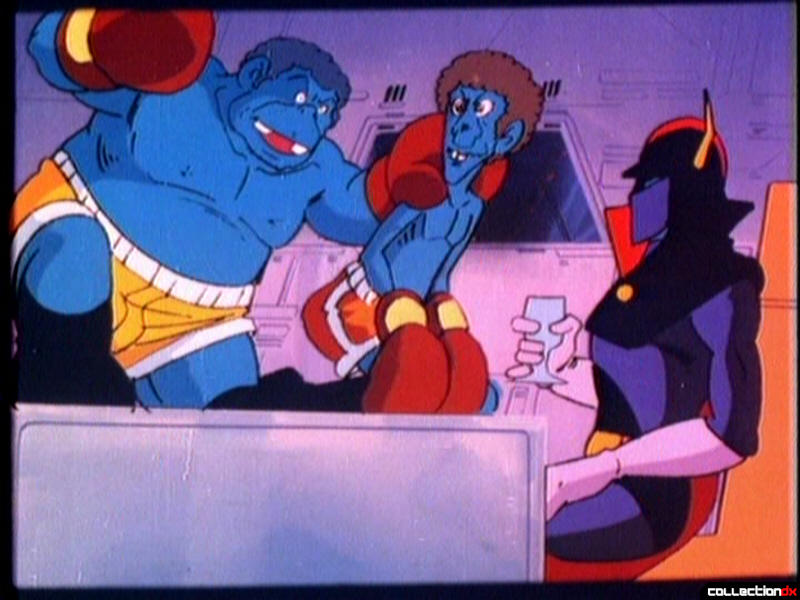 The villian cyborg human Alfred (on the right) makes his minions box for entertainment. I should note here that my DVD player didn't like this disc at all, refusing to make many cool screencaps. There are whole scenes of blue-guy retartedness. You have to wonder how these guys dress themselves in the morning, never mind build a galactic empire. There is also a hot chick sidekick to Alfred, who looks a bit like a character out of Time Bokan. 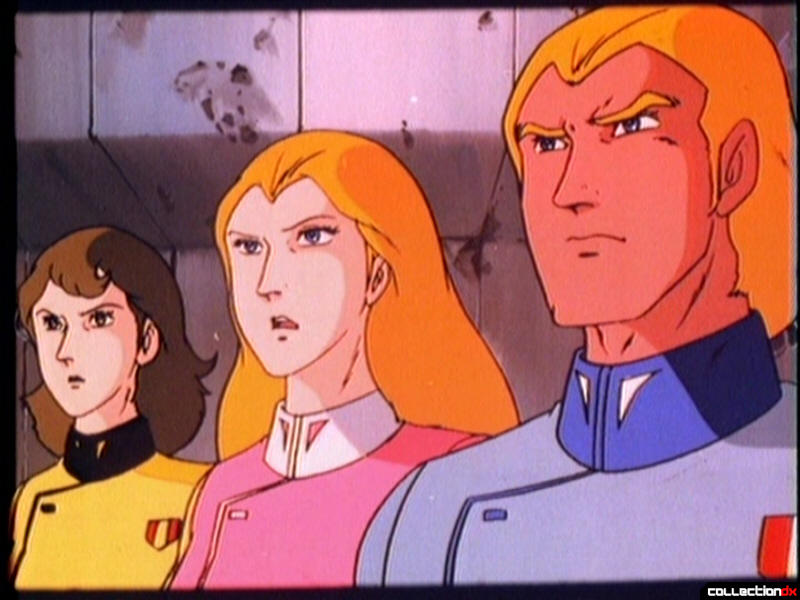 Of course, all the good guys are white aryan-types. They look like they were ripped right out of Voltron. Of course, there is the mandatory goofy sidekick, the troubled serious one, and the hot chick who falls for the leader and needs to be rescued. 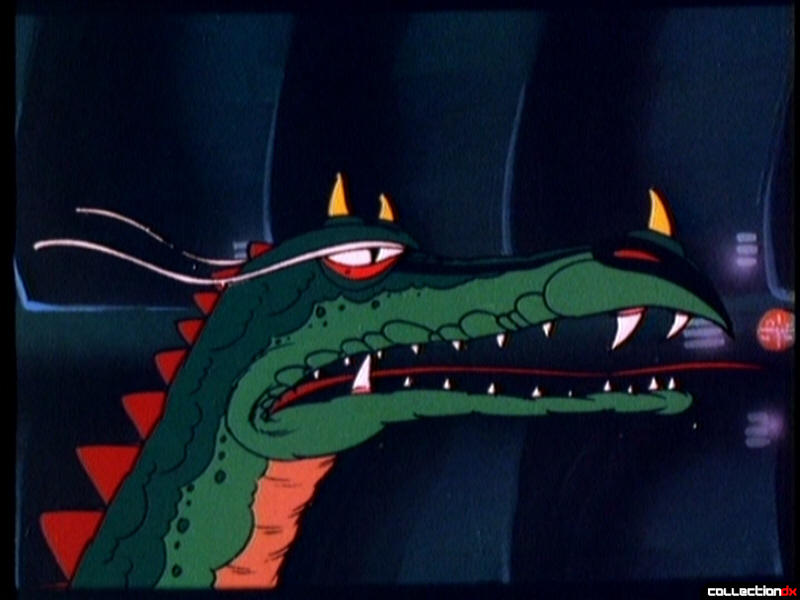 Somehow, half of the crew of Mazinger 7 are kidnapped and trapped inside Alfred's fortress. They escape, only to encounter this hideous monster, probably the only thing actually created by the Korean animators (and it shows). 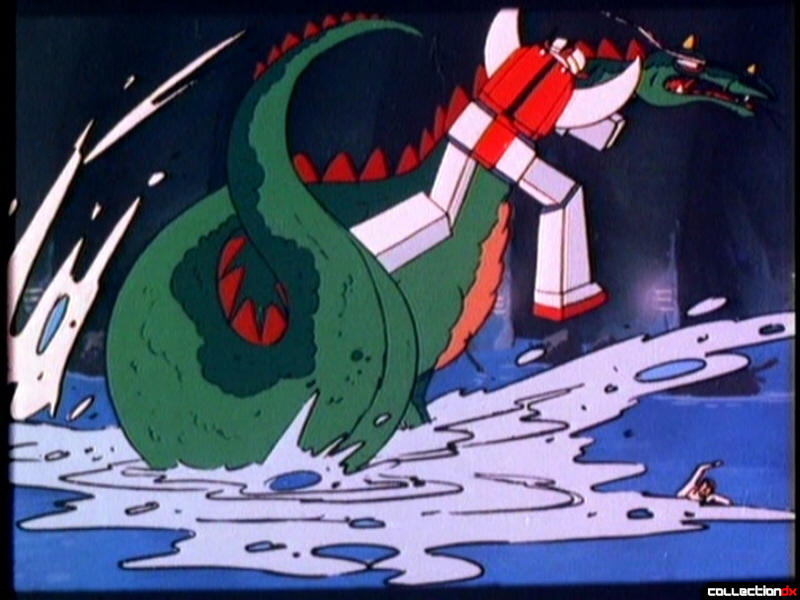 Mazinger 7 crashes through several doors to WRESTLE with the dragon, while the pilot and hot chick swim to safety. Eventually Mazinger 7 realizes he can just shoot his backpack at the dragon, severing its head with it's razor-sharp wings. Somehow he forgot about his ax, trident and chest guns.

So, to recap, Protectors of Universe is pretty terrible, but watchable if you turn the sound off. The fight with Mazinga 7 and FauxRaideen is ok, probably worth the dollar alone.