The first figure I saw Amok Time advertising on their site was this 12" figure of Rondo Hatton and I gotta admit, although the face was familar, my knowledge of the man was limited. I had a vague idea of who he was from a memory of always seeing VHS tapes of House Of Horrors or The Jungle Captive where I used to buy my movies. But honestly, although I always meant to buy those ones, it seemed there was always something I wanted a little bit more and I regret to admit that I still haven't seen them to this day. But I used to love watching the old Sherlock Holmes movies with Basil Rathbone and Nigel Bruce (the Holmes and Watson, for my money) on one of the public broadcasting stations here in Boston (Channel 64, WGBH, I believe it was) and so there's a pretty good chance I did see him in 1944's The Pearl Of Death when I was little. But if so, the details of the man faded from memory and now thanks to Amok Time, Rondo is back in the spotlight. From the back of the box:

Rondo Hatton was born on April, 22nd 1894 in Hagerstown Maryland. Before Hollywood, Rondo served in the National Guard to pursue a military career. He was stationed in France during WWI. There, he was exposed to poison gas, hospitalized with lung injury, and was medically discharged from the service and given a pension. Now living in Florida, it was after his military service that he developed acromegaly. Acromegaly is a hormonal disorder that most commonly occurs in middle-aged men and women. The name "acromegaly" comes from the Greek words for "extremities" (acro) and "great" (megaly), because one of the symptoms of this condition is abnormal growth of the head, hands and feet. This unfortunate affliction gave him his unique appearance. While shooting in Florida, a Hollywood director saw Rondo and thought that he had a face that was meant to be in pictures. Moving to Hollywood from Florida, Rondo was given a string of mostly uncredited bit roles. His uncredited acting luck changed when he was cast for the role of the "Hoxton Creeper" in Universal's The Pearl Of Death (1944). This was the start of the Rondo most remember, a skulking, shadowy figure nicknamed The Strangler, Creeper or Brute Man. From these roles a star was born. Unfortunately, due to health complications from acromegaly, namely heart disease and diabetes, Rondo passed away far too early, February 2, 1946. From his short Hollywood career his legend grew thru the classic monster renaissance of the late 50-60s. 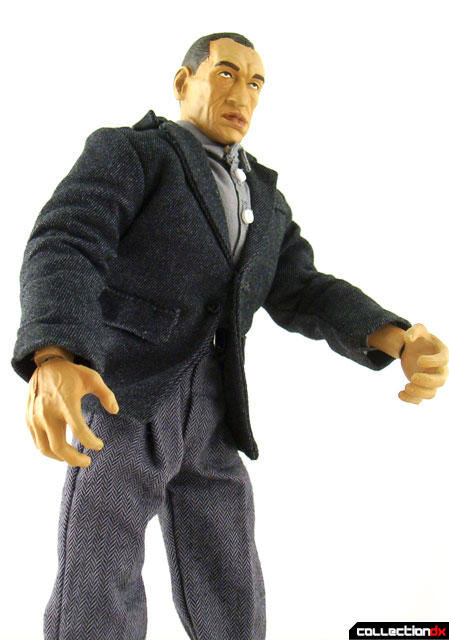 The Rondo figure comes packaged in a nice box with opening lid and window box interior. The box art is beautifully painted by Rainer F. Engel* of Nightmares In Plastic magazine. When the box are was initially revealed, I remember feeling a bit underwhelmed by it, but as time has gone one I've come to like it more and more. I think it just took a little getting used to since I'm so accustomed to having the old poster art on these boxes. The interior of the lid features a nice image of the toy. In fact, if you look closely, you will see that the painting wraps around the lid and serves as the background for both the painted image of Rondo on the cover and the photographic image of the toy inside! 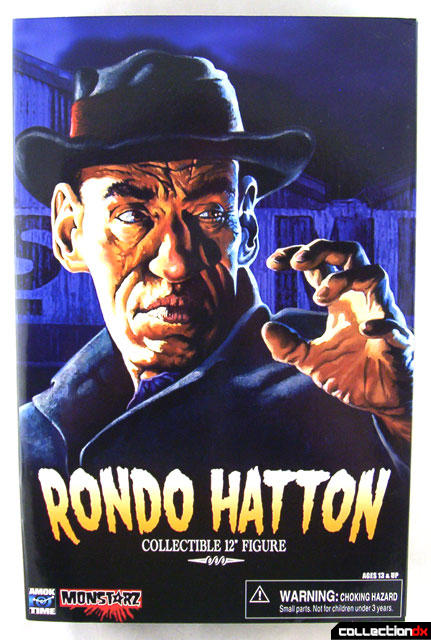 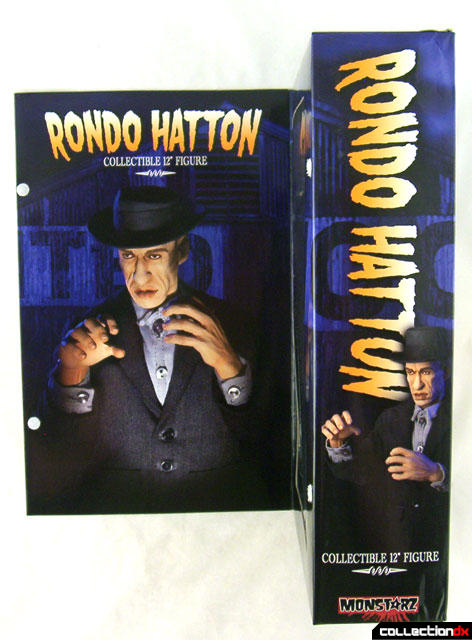 But perhaps best of all might even be the interior tray that holds the plastic that the figure is packed in. Check out this awesome image of the shadow of the Creeper! 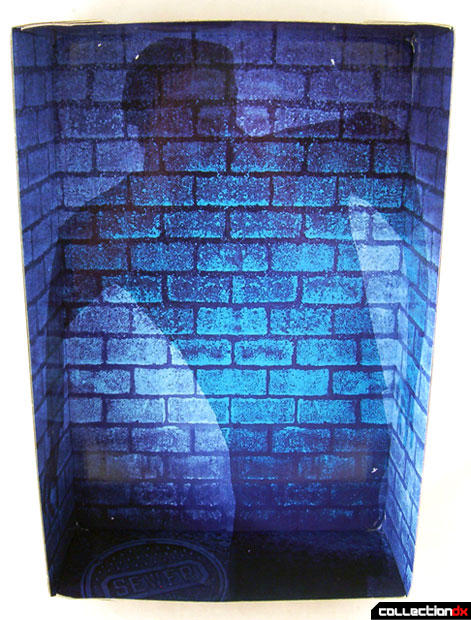 That blew me away when I saw it. It's so representative of the style of thriller made back in the day. I only wish it was much bigger so that you could really use it as a display backdrop for the figure.

Anyway, about the figure. I am really, really happy with it. In fact, it's surpassed my expectations. I figured I would get it just to add that variety that by now you know I love, but in person the toy really stands out. First, the sculpt of the head and face is PERFECT! One of the very best of any 12" doll I have. It looks great from all angles and the attention to detail is striking, from the wrinkles in the forehead to the veins in his temple. The nose looks like it's been broken and entire face is hard. This is a guy you don't wanna mess with! 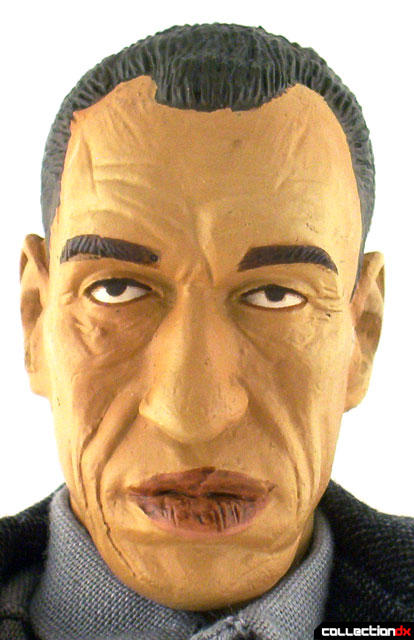 Rondo comes with two different hats that he can wear as well. One is tall than the other and the smaller one has a sort of belt molded onto it. They both look good, but I tend to prefer the smaller one. 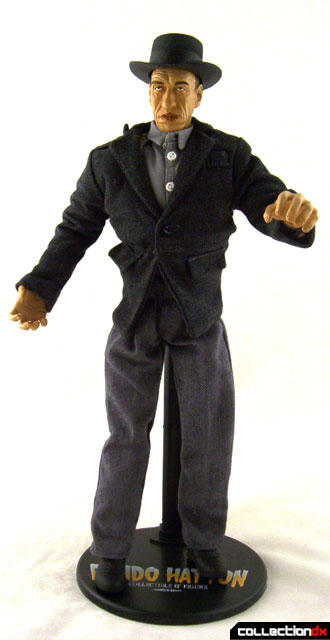 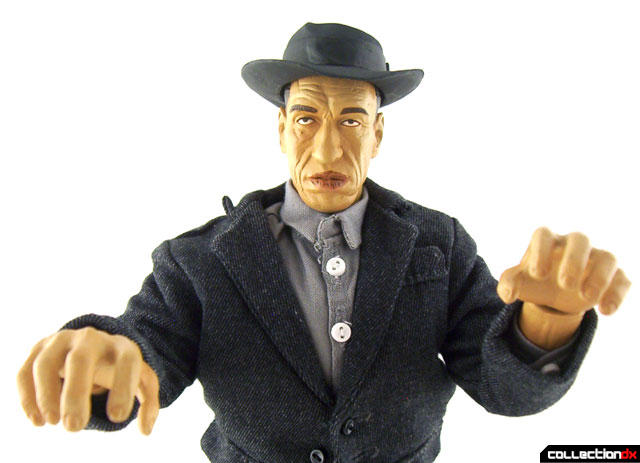 Rondo's clothes are also extremely well done and are bulky enough to provide that intimidating mass that gave his characters such a frightening appearance. His outer jacket has two buttons to open/close it and I think these might be my only "complaint" with the figure. The buttons are actually sewn in there! Although this detail is to be commended for it's realism, I worry that at some point I might break the string that attaches them and it can be a bit difficult to get the buttons through the holes on the other side. A snap button would have been easier, but that's just a personal preference on my part. Most people would probably applaud the extra effort that Amok Time has taken here. Heck, he even wears a real belt that has been expertly cinched off rather than one that is just snapped on! 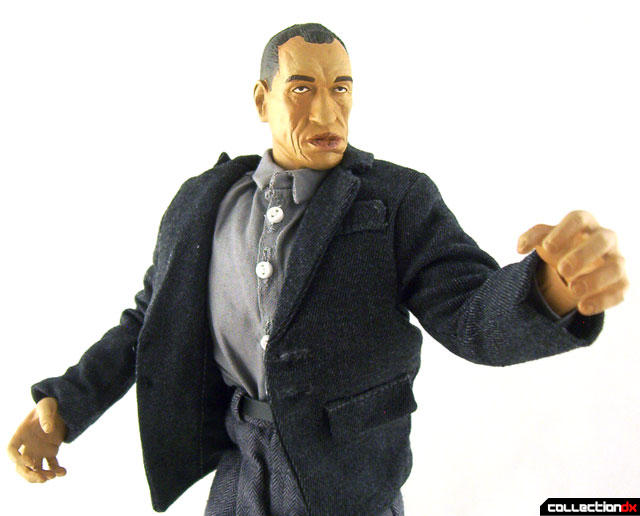 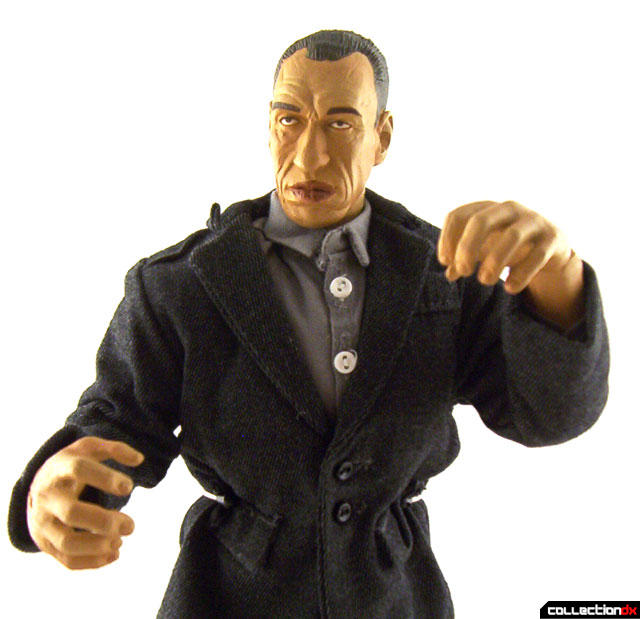 Here's something else that I noticed and at first I thought was a flaw, but I'm not sure it is. Both lower arms can be separated from the upper arms quite easily. At first I thought it might be broken, but then I realized that even though they can come loose, the lower arms are actually attached to the sleeves so that they do not come out of the clothing and off the figure altogether. This makes me think it was intentionally done as a way to provide more flexibility in the arms. Some flexibility was lost due to the bulky clothes I mentioned earlier so this seems like a really neat way to compensate for that!

Lastly, Rondo comes with his own 12" doll stand with his name on the base. It's a real treat to have these figures come with stands. These kinds of figures are cool, but it's a pain to have to buy them and then go buy stands separately so their inclusion is a real plus. 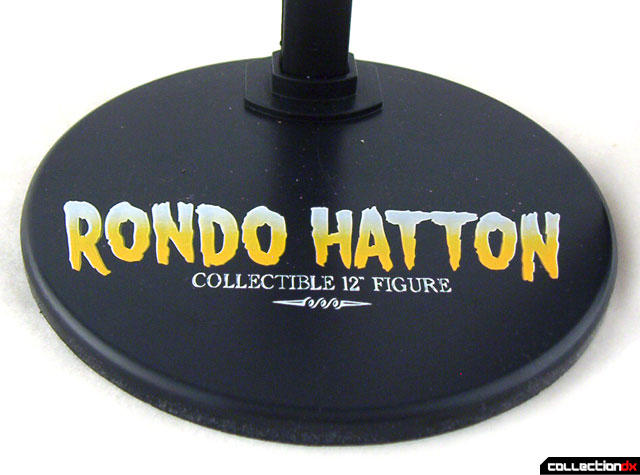 Rondo Hatton is gone but not forgotten. Every year, the best in horror films, comics, tv and other media is celebrated with the Rondo Awards, as voted by the fans. I think you can expect Rondo himself to compete for a trophy for "best toy" this year. You can get your 12" Rondo at AmokTime.com.

*Rainer is also a fellow member of the Universal Monster Army and his magazine is based on the book he co-wrote with Jorg Buttgereit, director of a little film called "Nekromantik", from whence my nickname came!

When I saw the thumbnail, I thought it was Dick Tracy. lol

Y'know. I have ZERO knowledge of Dick Tracy! Can you believe that? Never saw a movie, read a comic, whatever.. zip nada nothing. Nothing intentional, but somehow I've just managed to never get into him. Same thing with James Bond. There's like a million Bond movies (many on On Demand now, I think) and yet I only saw one, when I was about 4. What little I know about them I only know from other things referencing them, which means I really know nothing.

Major props on your last two reviews! One thing we must consider is that many of the items that are reviewed on Collection DX are mostly obscure items that some of us have never heard of. That usually sparks our interest in finding out about the subject.

I've seen Rondo Hatton' s face before but knew nothing about his career and life ( Although I believe the box bio mistaken his career in WWI as WWII since in refers to Gas Attacks and such..) It's great that they are picking some more obscure actors for these release as it's way long overdue that they receive some recognition for their careers and films. Sure they are gone but its good to know they are being remembered.

Same to go for Vampira. It was way daring to do the work she was doing in the 50's. I mean only less than 10 years after WWII and 40's culture, Maila was just way ahead of her time and its sad to hear that she recently passed away just a few months ago. It's also sad to note her work simply doesn't exists anymore as itis nearly all lost or destroyed with less than a handful of shots that are known to survive. Maila is one of those people I would have loved to meet, which wasn't not that out of the picture as she lived in Los Angeles. Knowing my luck she most likely lived in Whittier! Ha ha

So thanks Dave for these two reviews!

Thanks, Leonardo! One thing that I meant to mention in the review, but just realized that I forgot was how, although he was long dead when the movie came out, "The Rocketeer" featured a villain clearly based on him. So you might recognize him from that movie as well. I recently saw that for the first time this year and was surprised to see that.

Oh, and that was my error in the biography. It does say "WWI" on the box. Oops! I'll edit it now. Thanks for pointing that out.

Awesome toy, awesome review. I may have to start referring to you as "Teh Jerk", Dave, because you're on the verge of turning me towards 1/6 doll collecting!

I agree with Leonardo: what's really appealing about this particular piece is not just the quality of the toy and the accuracy of the sculpt; it's also the bit of film history that goes along with the subject matter.

Anyway, I haven't seen any Hatton films, but I really enjoyed this clip on IMDB.