Destroy All Podcasts DX Episode 72 Side A - Macross Frontier 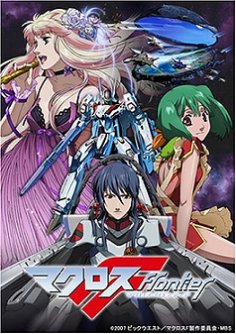 This is the first part of a two part podcast series on Macross Frontier.

It's about dueling idols, EVERYTHING turning into a robot, space bugs, and vocational schools that specialize in both jet pilot training and training singers. Imagine a combination of Top Gun and Fame!

31 comments posted
Good to see this one out...

I am downloading now... wanna hear what you guys have to say about Macross F... it's the firts show I've been able to folloe 'live', as it was airing in Japan... and I really liked it.

Has Andrew preordered the Bandai 1/60 Messiah already? I bet he has.

Cheers to the DAPDX team! Keep it coming!

I'm gonna wait on the pre-order until Ozma with Armored Pack is confirmed. That's my favorite.

What the heck show were you guys watching? I was watching an awesome anime about working class pilot Ozma Lee and how he has to win Cathy Glass from her loveless arranged marriage to the stuck up rich guy Leon Mishima. At the same time he has to fight the alien hoards of the Vajra to get a limited edition signed Fire Bomber DVD (which surly has the latest remix of Try Again). I don't know why you focused so much on those minor side characters and their boring love triangle. They hardly appeared in MY Macross Frontier.

I feel it is going to come down to agreeing to disagree but I can't get behind your love of Sheryl and your hate of Ranka.

Sheryl seemed less a strong female character and more a full-blown bitch. I suppose that is a type of strong female character but a bad type. Plus bitchy characters are usually just hiding their weakness of character behind their in your face attitude. She did not add much to the overall plot until she started dying of dramatic bullshit disease and sang to the people in the shelter. This led to me never rooting for her. She seemed manipulative and selfish. A good nasty character with a sweet veneer but not someone I wanted to get behind.

I felt Ranka was definitely moe at times but I still enjoyed her and she had her moments to shine. I think I might just have a higher moe tolerance but I never felt she was so bad that it made her unlikable except in episode 20. When she refused to sing it was quite lame sauce.

I also found it odd. I think it's obvious were we hang out on different parts of the Internet but I found there was this insanely vocal Sheryl fandom that was half tolerable and understandable and half insane nasty shippers. Oddly all the people who comment on any blog post I have ever written about Macross Frontier have been Sheryl fans. Ranka fans have equally annoying fanboys but I never noticed the bloodlust that the Sheryl fans had.

That and I felt Michael Blanc was boring. He was the Roy Fokker wannabe. Ozma is the one and only spiritual successor to the Fokker legacy. Try Again Michael.

See, this is the message I've been waiting for! So I have to ask, do you watch shows like Lucky Star or Moetan or Potamayo or hahaha Lolirapefest 100? Or are you just a Macross fan?

Ouch. That was slightly uncalled for and rather harsh. I mean I know that I am buying my Nagi Sanzenin X Sakura Kinomoto doujinshi* collection as I write this but that was still harsh. :)

Like I said I guess we will have to agree to disagree about Sheryl love vs Ranka love. Still can't we all get behind Kekki Basara love. I mean even I had a smile on my face when Sheryl shouted, "Listen to My Song!"

*I don't think such a thing exists and if it does I would rather never know.

How little you know of Andrew! He is a connoisseur of the Yamato product line!

I had to order replacement arms for my self destructive VF-0A two days ago, so right now I'm biased.

I love Yamatoes, I just have to resist the impulse of moving any articulation.....

On a more on-topic comment, they should have a 10 seconds rehash ending, were Ranka falls into Klan's cleavage (from that platform at the SMS hangar where every human talks to her while in Zentran size) and explodes in a spray of blood, and Klan, completely raged and desperate (don't forget the two bitches get close at the end of the series....) ravages the hangar with a gunpod, Stallone style, and then points it to her head and shoots.

A little gorish, but would do the trick for me. MUV LUV style ending.

I'm still kind of irritated about my Yamato Garland but at least it was fairly easy to get a replacement.

I guess the Garland(s) were sold officially in USA, so that's why you got easy replacement parts, right?
Yesterday, I got two emails, one from HLJ and the other from OverDrive, both stating that Yamato is 'out of stock' of the parts I ordered (another pair of VF-0 self destructive arms)

SO GUYS, take my sorrow as yours, and chersish those arms as if they were your own!

Again, **** Fartmony Gold for their stupid royalty/copyright shit. This is ALL their fault in the end.

That's funny, because the lawsuit is between Big West and Tatsunoko, not Harmony Gold. Tatsunoko are the ones with international distribution rights to Macross. Harmony Gold are sublicensed by Tatsunoko. Basically they are beholden to Tatsunoko and have to follow what Tatsunoko says.

So the ones you should be mad at are Tatsunoko.

P.S. Please tone down the language in the comments threads. If you want to email something totally filthy in feel free, but the comments are part of the larger site. I've edited your post slightly, which I hate hate hate doing but I figured better for me to do it before someone overzealous does it. Sorry!

As has been pointed out elsewhere, the fact that we deliver, ah, "mature content" in the podcast doesn't mean that it's okay for the rest of the site. We might be jokey in that disclaimer up at the front, but that doesn't mean it's any less serious.

A two parter nice. You guys are starting off sweeps strong.

But I guess that's one way to bring in the money, isn't it? Unless the movie turns out to be little more than an altered recap, but I'm honestly hoping that's not the case, and that mostly new material comes along.

Good show overall, waiting for side B then.

To go off on a slight tangent, because it was mentioned on the podcast...meh, for how messy the second season of Code Geass was (time slot change -ironically CG S1 aired in the same one Macross Frontier eventually used-, unnecessary executive meddling, too much fanservice / pandering, pacing issues, whatever else), the ending itself was rather well-done (something I couldn't honestly say about GSD, for example). Btw, Code Geass never really had good ratings though, at all, but its DVD sales were crazy high. R2 was probably Sunrise's attempt to make it into a high rating show, which clearly backfired.

Awesome to see another Macross podcast! You guys are always a blast with Macross involved.

That about covers most of the characters.

Of all the episodes I would say 17 was my favorite. Just so many nods, pineapples, and some of the lines. God, just so much trolling. Oh and plenty of Fire Bomber in that episode. I enjoyed seeing all the VF-17 modifications, but hated seeing them die constantly.

Kinda wish one of the random Ranka episodes was instead Ozma going to see a Fire Bomber concert and dragging his squad along.

The pool of ink eyed engineer in the original Macross that Robotech named Dr Lang is Chris J Takatoku, Overtechnology expert and designer of the VF-1 Valkyrie.

You're making that up. Global just calls him "Hakase."

But I don't see any indication here that that has anything to do with the black-eyed engineer on the Macross. The name Takatoku is cleary an in-joke as the Takatoku Toys company made the Valkyrie 1/55 toys in the 80's and that sure fits with "Chief developer of the VF-1 Valkyrie and VF-X-3 and the 'Father of the Variable Fighter.'"

Being both an aeronautic designer and the chief engineer on a ship seems super unlikely and again I see nothing in the source material to support this claim. Am I just missing something?

It flies by sheer force of AWESOME.

Also it's probably mostly thrust. It apparently has "nuclear turbines", and from the looks of things it mostly depends on body lift and thrust vectoring; the wings are really just there to act as control surfaces.

So the designer wouldn't have to be an aerodynamic genius; a mechanical engineer is more likely. So yes, it's possible that the same guy who designed the VF was

Also, given the size of your typical advanced aerospace program, "chief developer" doesn't necessarily mean that he did the whole thing himself. I do a lot of work on satellites, but you won't find my name anywhere in the list of Important People On This Program.

Regardless of your rambling, there is zero evidence to suggest that the guy who was riding on the SDF-1 on its trip back home making sure the engines didn't crap out is the guy who lead the project to design the Valkyrie years before and the character is not even named. As Andrew already said, Global just calls him "Doctor". The idea that he is a super important character is one created by Robotech.

You guys are going to piss some of the Macross World people off.....

Actually, so far all the feedback at MW has been people agreeing with us.

This is a good series I've seen up to episode 10. Gotta get the rest. I wish they'd do a story about what happens to the original Macross crew after Macross... no not Robotech! Ya, we all grew up on Robotech.

For the people that don't know why Kawamori plans to never do a SDF true sequel.
1. He hates sequels.
2. Hikaru's VA died and Kawamori is honoring him by not allowing anyone else to voice act his role.

That's actually incorrect. Long before Arihiro Hase died, Kawamori said he had told all the story he had to tell with those characters. Furthermore, Hikaru has been played by different voice actors in video games since Arihiro Hase's death, most noticably in the PS2 Macross game.

Guess I was wrong. I just repeated wheat I got out of a discussion involving Kawamori on the /m/. No one really called the guy out on it, so I just accepted it as truth.

Well, clearly Kawamori will do sequels. :) And hey, Hase was a voice actor in Macross 7!

Don't feel bad though. Fans spread myths over the internet like wildfire.

Sorry to hear of the few 'lolitoon' characters in this show, otherwise, it sounds rather OK if I can get around to watching it soon.