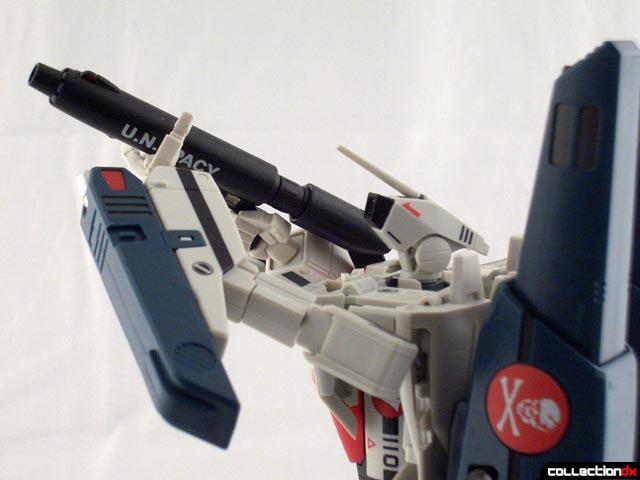 The only really notable difference between this release and the previous VF-1S is a slightly looser swing bar in the leg mechanism and of course, the new head sculpt featuring the single antenna design. For those not in the know, the letter designation after the 1 (as in VF-1A) generally tells you what the antenna array looks like. A has a single antenna, J has two and the S features 4. The first release got everything right so there wasn't much room for improvement between releases so just expect more of the same goodness as the last review. 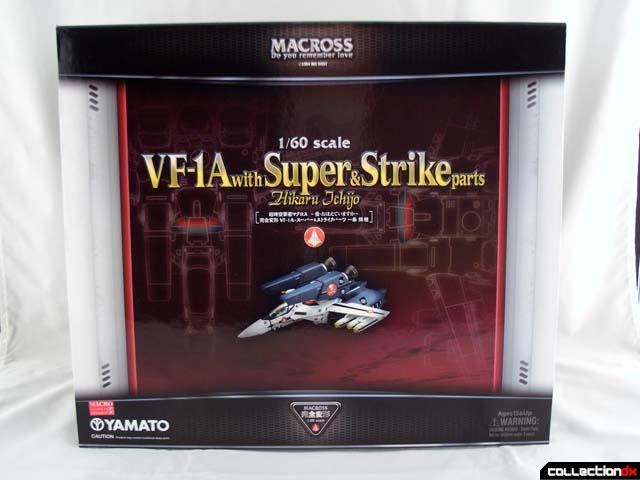 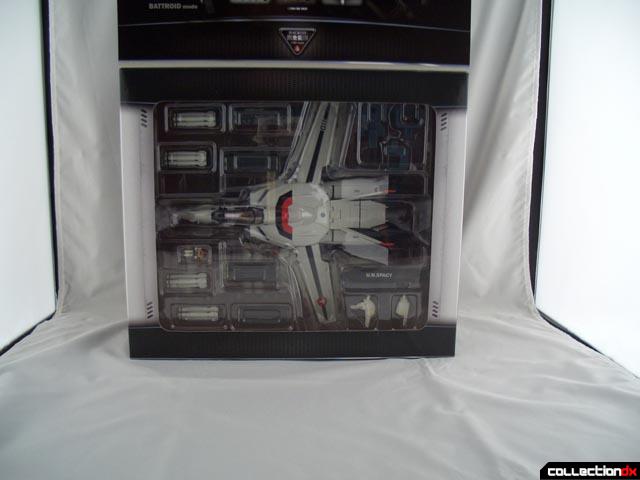 The VF-1A is packed in the usual Yamato window box package with two inner trays stacked on top of each other. The fighter and it's accessories in one tray and the Super and Strike Armor parts in the other tray. Yamato also sells the fighters and Super/Strike armor in separate packages for those that want a slighter cheaper experience. Personally I would rather get the set together and have it all at the same time. 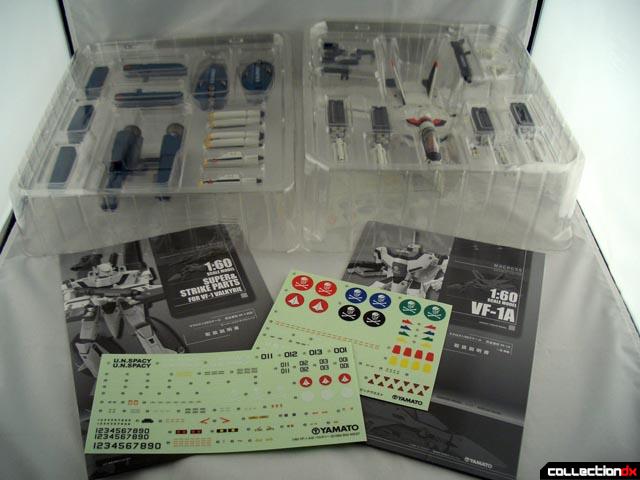 Included inside the box : 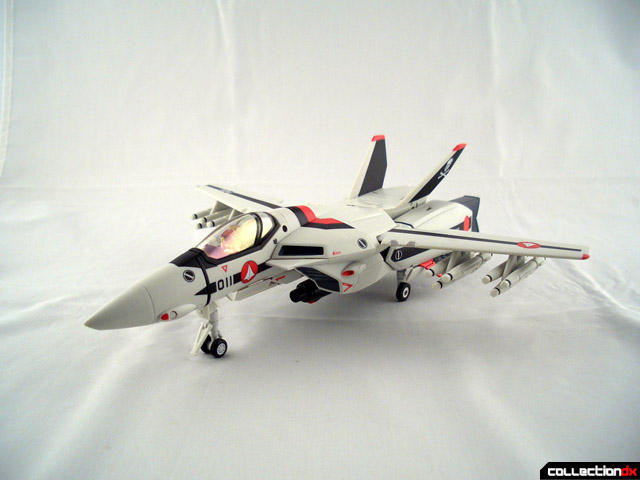 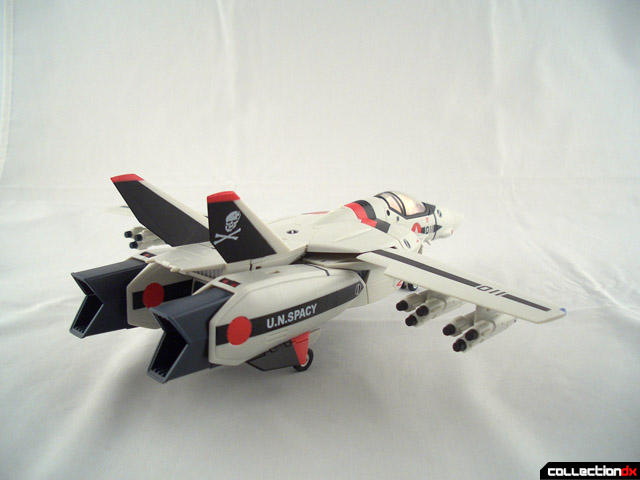 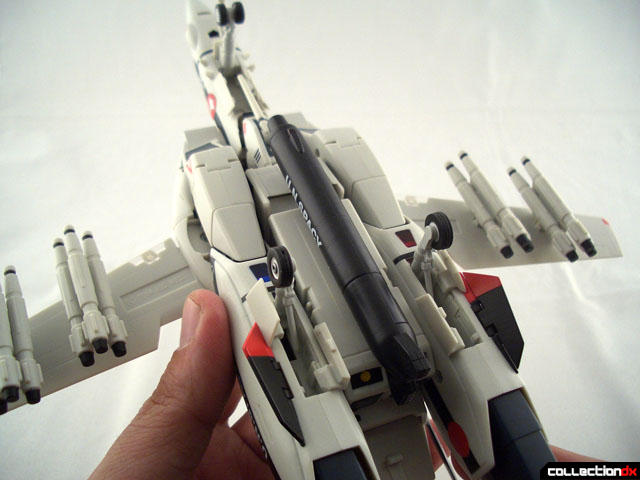 Fighter mode looks excellent and overcomes the usual shortcomings of previous designs by eliminating the gap between the leg and the chest without ending up with skinny legs in the other modes. Keeping an excellent and well-balanced look in all three modes. One mode doesn't look better than others, they all seem to have been given equal treatment and attention. 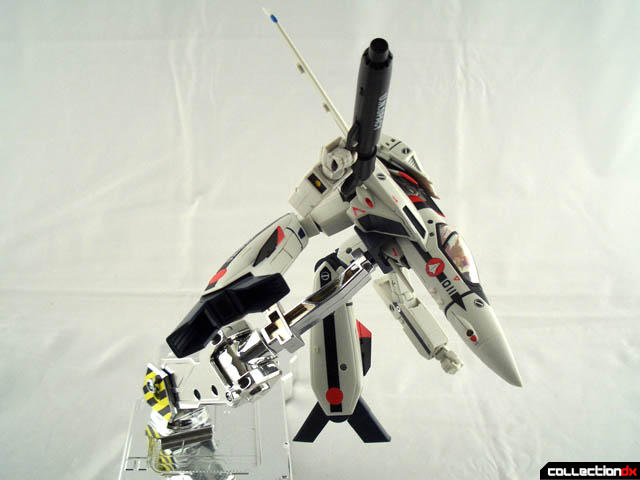 As you can see from the pictures in the review paint detail is excellent and features tons of tampo printed detail. I think most collectors will not find a need to use most of the stickers on the sticker sheet. 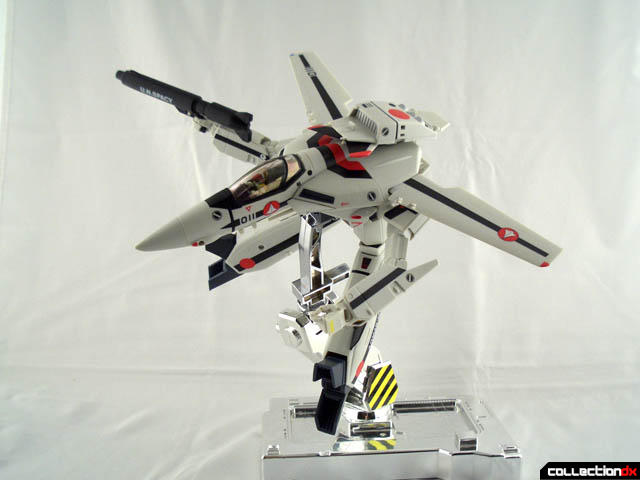 Gerwalk mode is the VTOL (Vertical Take Off and Landing) mode of the fighter and this iteration again just looks stunning. The feet and knees are given the ability to hyper extend so that you can get them flipped forward to simulate the animated look of this mode. Personally, I think this version of the toy has capture Gerwalk mode better than previous releases. Using the after-market stand by Yamato allows you to get some truly dynamic poses. 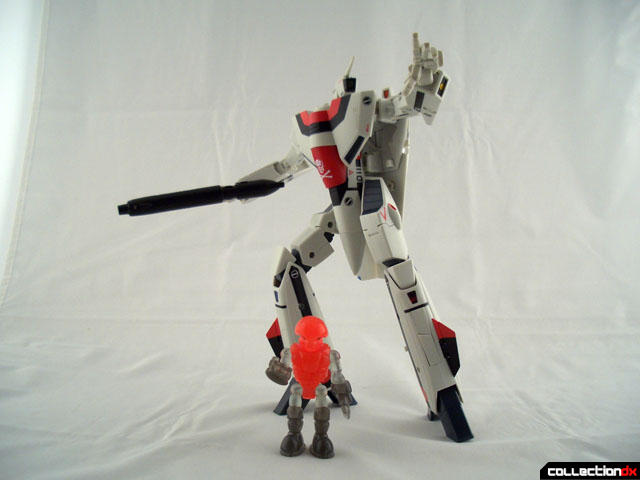 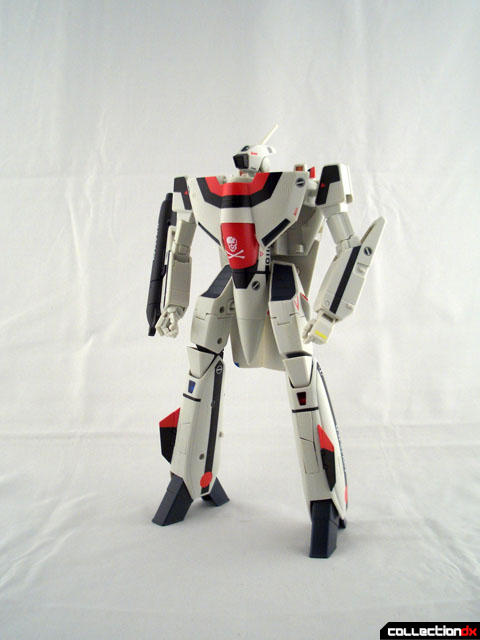 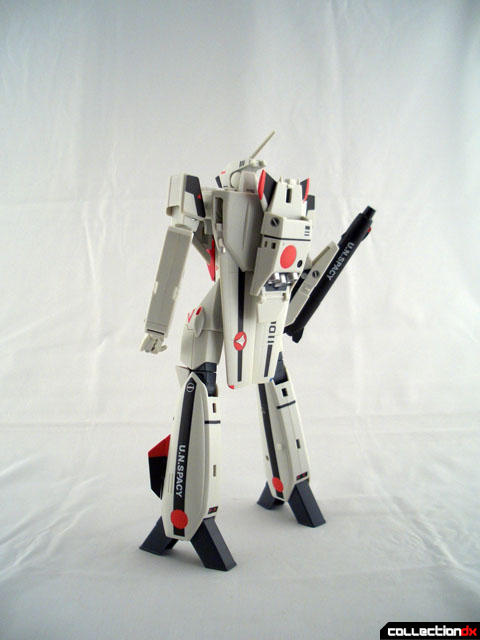 The most famous of its alternate modes is Battroid mode and again the 1/60 (2.0) version really nails it. While remaining a solid toy it captures the look of the series/movie nicely but it doesn't stop at looks, the figure has a full range of motion in the thighs and knees and the arms feature a double joint so that you can get the arms in close to the body for some (again) dynamic poses. 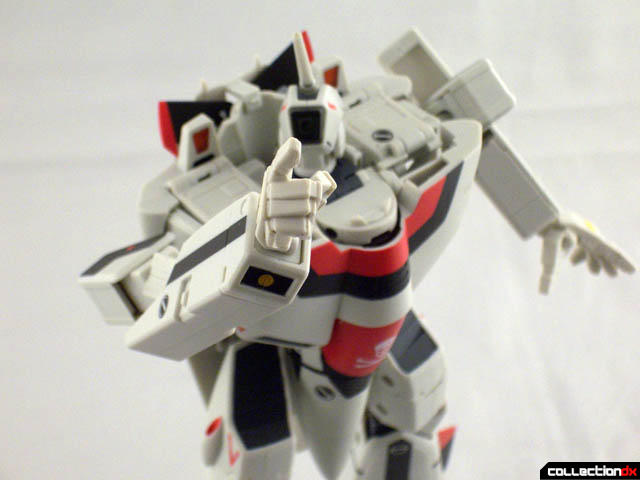 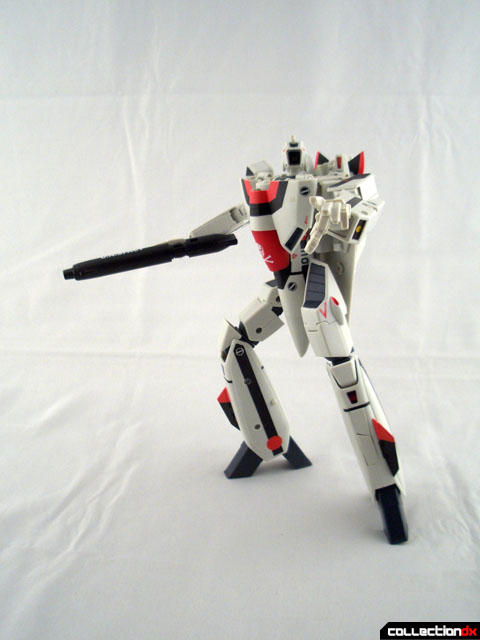 The articulated hands that fold into the fighter do not suffer from “chicken hand syndrome” like previous releases and look nice and beefy. The right hand also has a peg in it to clip into the gun pod handle so the gun pod stays in the hand nice and tight. So you may not feel the need to use the fixed posed hands as the articulated ones work and look very well but it is nice that Yamato included the extra set. 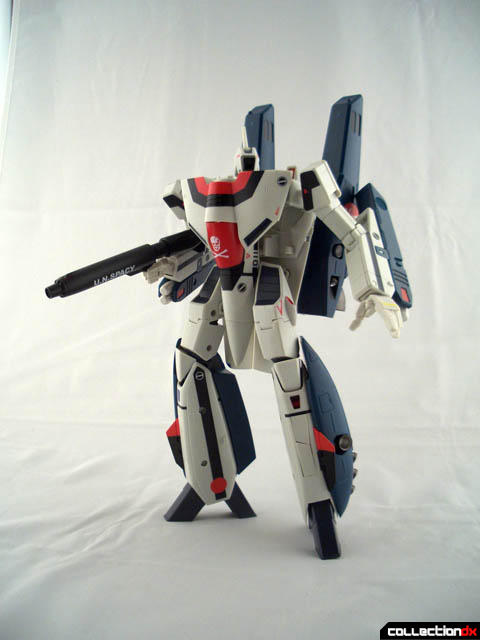 This set does include the Super and Strike armor parts. In the film Macross: Do You Remember Love Hikaru's VF-1A is only seen with Super Armor but Yamato was nice enough to include the Strike cannon in the set. 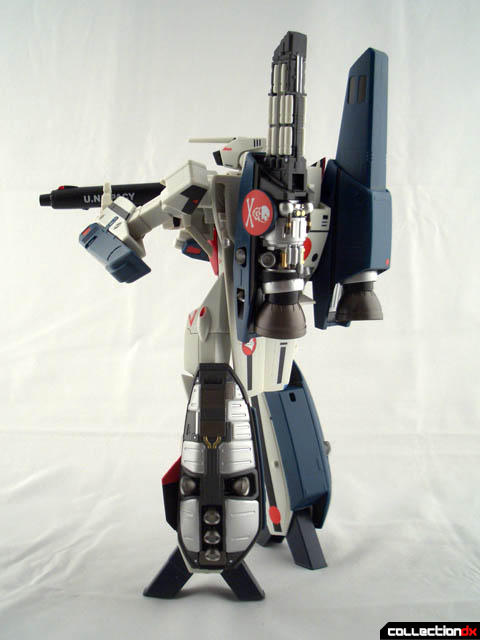 Armor is simple to attach and all stays of the VF-1A nice and tight. Yamato improved the design of the backpack attachment by adding clips that attach to the back of the fighter instead of just attaching to the backpack. On the 1/48 version, the backpack had a tendency to break during transformation so that is no longer a fear when handling the new 1/60 version. Be sure to check the video at the end as I highlight the Super and Strike armor this time around... 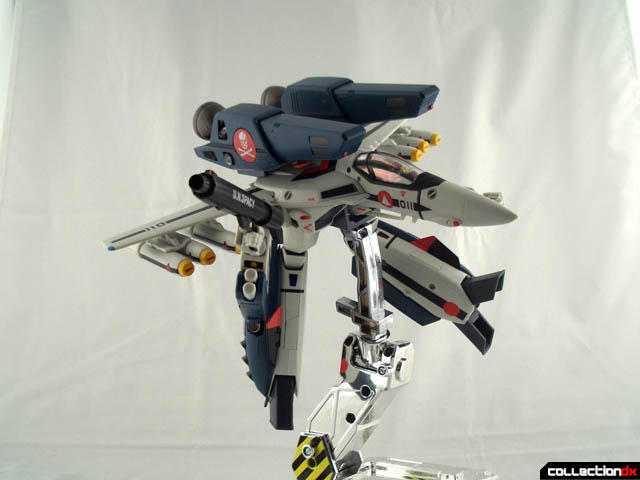 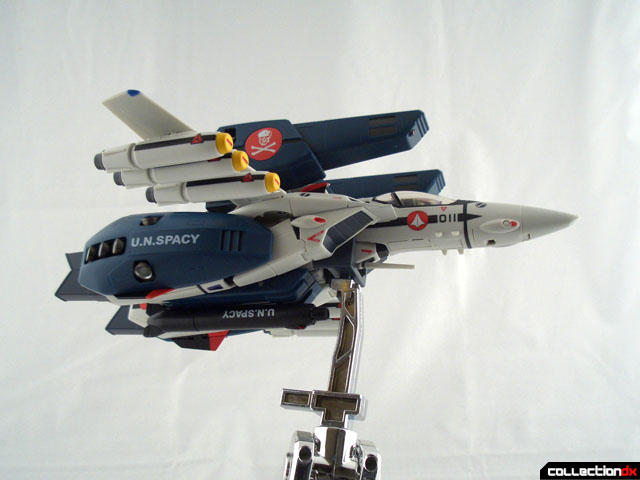 Transformation is very intuitive and straight forward but there are a couple of “Yamato engineered” points to be aware of. Check the video below if you want to see the full transformation. Unlike previous releases, there is no parts swapping and retains the advances of the 1/48th scale by keeping the swing bar mechanism to get the legs where they need to be in Battroid mode. Get to clicking below if you want to see more...

All around I do believe this release is superior in every way to previous releases by Yamato. While the 1/48th scale had some fantastic detail, it's large scale made it a bit too unwieldy to transform on a regular basis. I also felt the 1/48th in comparison to the newer 1/60 looked a bit long in the nose. The 1/60 scale has not sacrificed the aesthetic of one mode over the over. Simply put the new 1/60 is tight and fun to handle and looks wicked on the shelf. Buy one with no hesitation and have fun playing with it. Seriously Yamato has made a fine toy this time around.

20 comments posted
Now THIS one I will be

Now THIS one I will be buying. Thanks for another great review Atom!

I think your transformation video needed a British accent for that authentic experience.

Never liked HIkarus DYRL Valk. Would rather have any Max or Roy variant, or Hikarus TV J.

I know exactly what you mean about people being burned by Yamato for buying the early 1/60 VF-1's. I have two plus one 1/48.

I want to know, does this use the same rubber inside the socket of the hip? I really hated that on the 1/48.

The Hikaru DYRL color scheme is my favorite.

This is really strange but I was just about to watch Do You Remember Love? for the first time,and I thought,hey,I'll check CDX before I watch the movie.

Indeed- DYRL has spot-on animation, and is dramatic. No cuteness about this one. Indeed, the battle scenes don't have the same feeling of they've got a thousand Valkyries-per-dime or something; there are really bad-ass machines! (Hikaru's final alpha strike with his fully loaded red VF-1S Strike Valkyrie on Dolza was absolutely kick-ass!)

Loved the movie-it may take the place of Blade Runner as my all time favorite,but I'll have to see it a couple more times before I say for certain!

I know it seems wierd that I've never seen it until now,I've seen the show (well the Robotech version at least) and read the novels,but DYRL was just something I always put off for later. I'm glad I finally got around to it.

Badass review, Atom! Cool vid, too...I'm sure a LOT of owners of this toy will be thanking you for that one (I know *I* will once I get around to snagging one of these).

By the way, I'm pretty sure they're not "antennae" on the head, but actually lasers.

I'm not sure how I feel about the cheating in your transformation vid. Bummer that the head extends too far back for the swing arm to get free. That's kind of annoying. I know, I know...it's just one little extra step of removing the head. But there's this whole "perfect transformation" thing a lot of folks (including myself) are stuck on. There's just so much history with this mecha design and so much love for it on both sides of the globe. Anything pertaining to a toy rendition of Kawamori's VF-1 series Valk is bound to be a hot button topic...including "perfect transformation".

Uh Sanjeev, the whole head is on that extra joint. I showed you at the summit that you can pull the head down in fighter and Gerwalk mode with that joint so that it clears the bar. And you can do that head turret effect from the show. Atom just took the head off for convenience but the joint should allow you to pull the head away from the bar. I'm trying this with my -1S and I don't see how it can be different with the -1A since in the recessed position, both heads cover the swing bar.

The Summit was such a whirlwind! I'd forgotten about that! Very cool...thanks for the confirmation, Andrew!

(not that I needed it in order to want one of these!)

For Sanjeev. Head in and out

Very nice, love these new guys. For Hikaru I prefer the VF-1J of the original SDF to the VF-1A DYRL. Not that it isn’t nice; but I think Max when I look at a VF-1A. Will there be any reviews of the Origin of Valkyrie Bandai line?

leon,
hi,i saw the macross world regarding the breakages on the vf-1s right shoulder hinges...so do u notice any crack or stress line over there?is quite worrying as now i'm just too afraid to transform him again...pls advice what shall i do???thanks...

leon,hi Atom,thanks for replying,but what happen here is that it only appear that vf-1s with S/S have that problem,it seem like its a defect.someone mention that they never use any force and very careful with it also,but the arm just break,when i look at my Roy,the right arm hinge that metal pin is too thick,there is really a different when u compare to the left one...this is so pissed off,i hope my coming 1A won't have this issues.do u still transform Roy every now and then?

Hi, I'm new to this board, but am very happy to have one of these on the way from Hong Kong. I also picked up a Destroid Tomahawk in olive with weathering today. I have a feeling I'm going to become hooked on these once they arrive!

Got this one in a bit ago. Based my purchase on this review and others from this series of 1/60's by Yamato on here. I have to say, I'm extremely impressed with this figure. Could not be happier with it. Also went through Angolz for the purchase. Was a first time buyer from them and will be happy to go through them again in the future.