The Mecharobo Gaiking is better known in the US as the Shogun Warriors ZARGON.

First things first – this toy comes from the collection of one Mr Joshua Fraser (aka Josh C-10 Fraser). For those of you not familiar with Josh, he is not only a legend in the collecting world, but also a dear friend of mine. He doesn’t have the biggest collection – not in the least. What makes him a legend is his particular fascination with 2 things – Gaiking, and mint C-10 boxes. He will upgrade toys from a C-9 box to get a C-10 box. He has custom containers made to make sure they stay C-10. It’s an obsession that goes beyond the bounds of normal collecting. For him, nothing less than deadstock will do. It makes for and impressive, and respected collection.

That being said, Josh came up one night to photograph some items for auction, and he asked if I wanted him to bring anything. I asked for “that Gaiking that comes apart and is battery operated”.

“The Mecharobo” he tells me.

Of course I want to get this classic toy photographed for CDX. SO he brings it up, components wrapped separately from the box so not to get damaged.

What makes the Mecharobo Gaiking unique is its construction. The main torso has a motor in it that turns various connection points to the body. All of the parts are modular; so you can swap limbs, heads, etc, and then switch it on, and watch the appendages start flailing. There were only two Mecharobo toys released in the line – Combattler being the first. 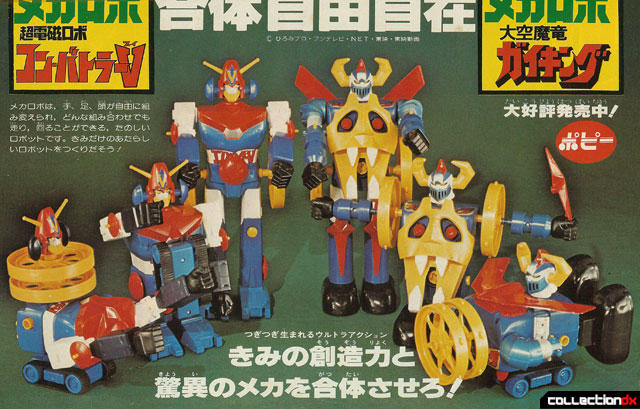 First off – the box. Beautiful. You will notice that the printing is a bit off on this specimen, looking like you need 3-D glasses to view it. 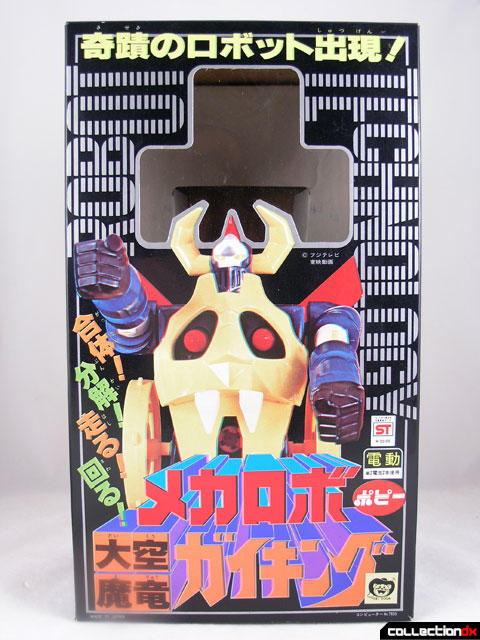 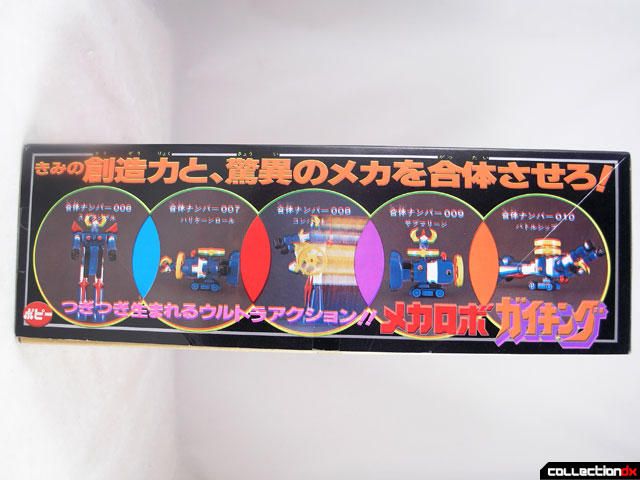 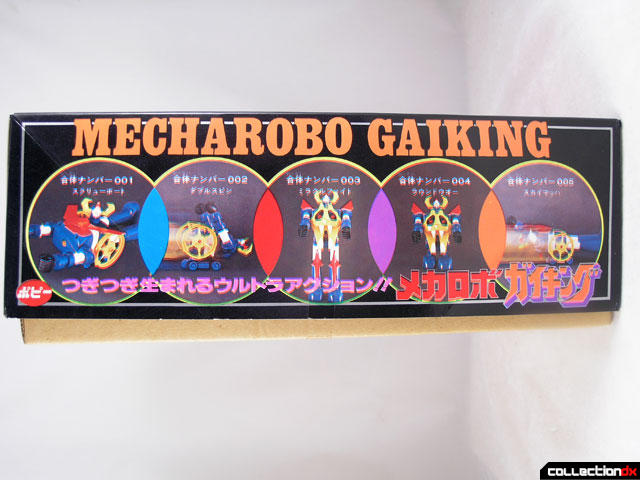 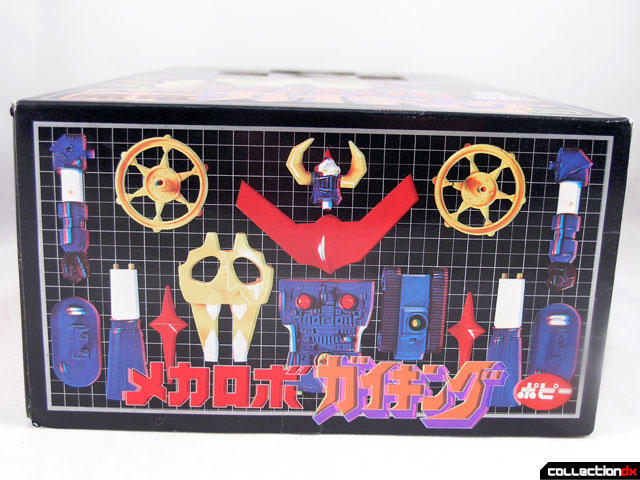 The toy itself is absolutely stunning. It is one of the best representations of Gaiking, in my opinion (in toy form). 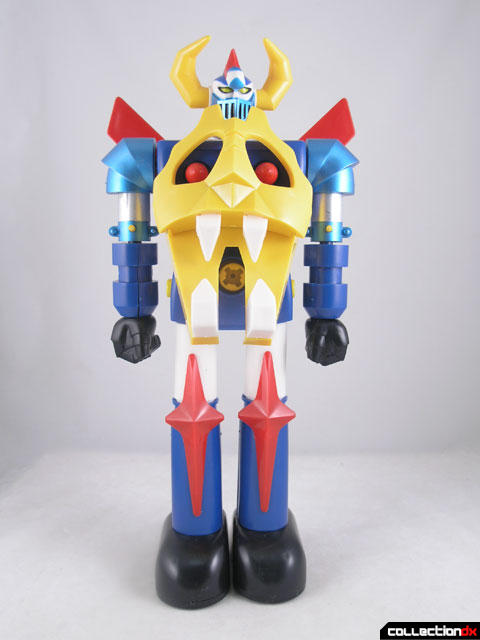 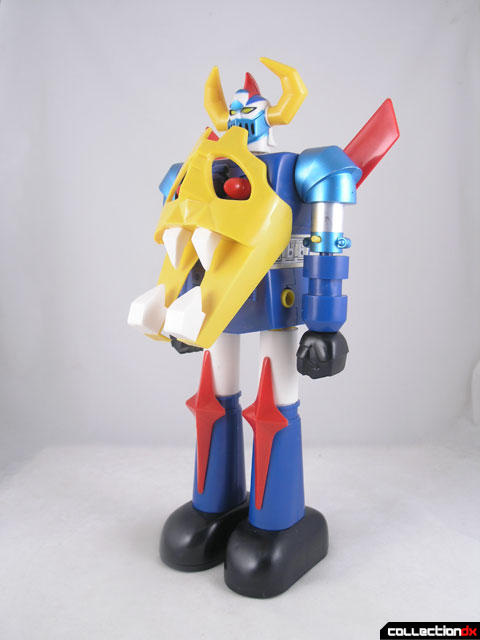 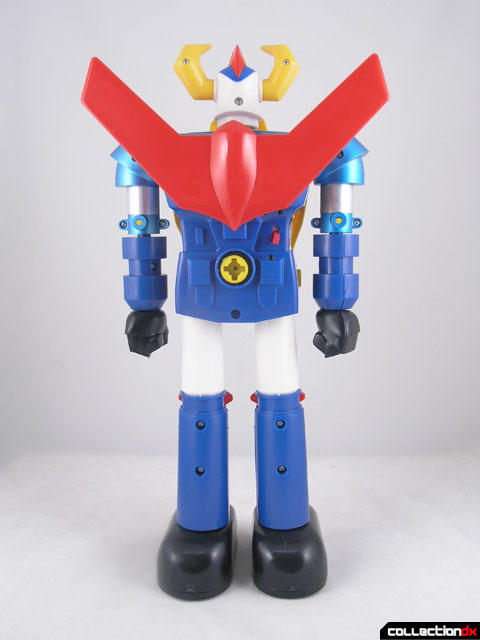 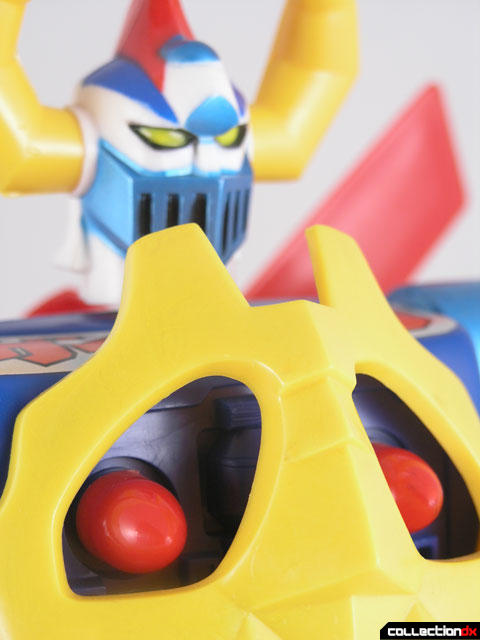 All the parts are hard ABS plastic. Each part is removable from the core body, including the skull face. 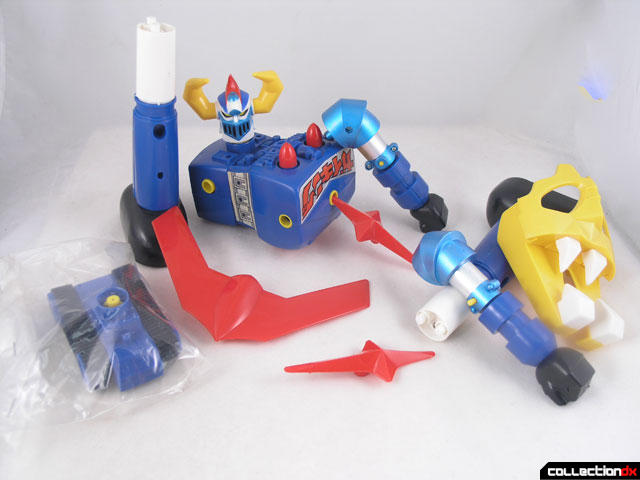 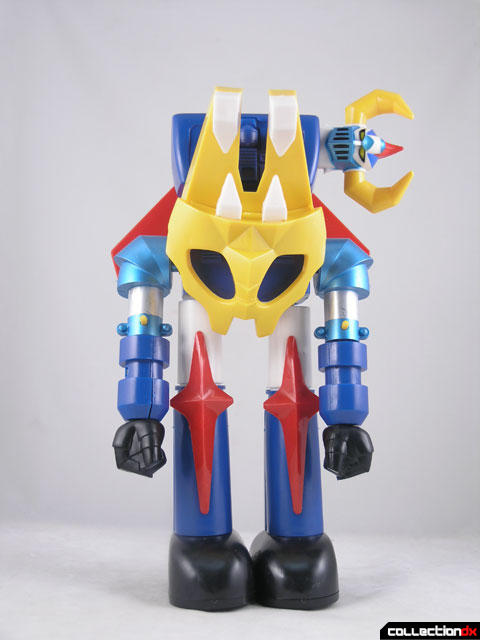 I asked Josh about the red missiles in the chest. They do not shoot. He thinks they move back and forth, but I was surprised to find out he’s never turned one on. Ok, so maybe I shouldn’t be surprised. But that’s our best guess. 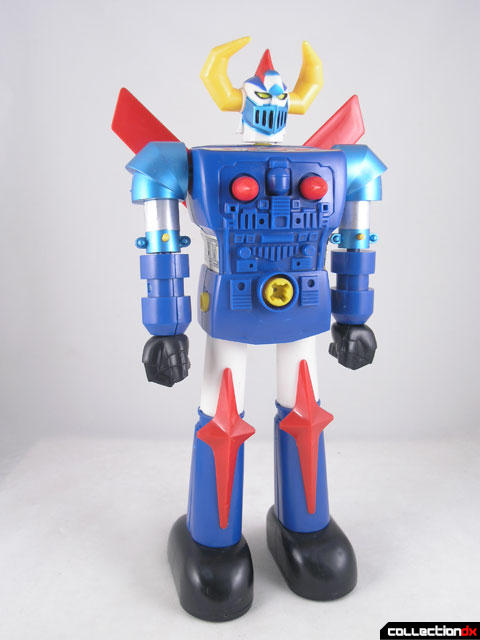 The fists fire by pressing a yellow button on the upper arms. Unfortunately, the hands cannot hold the leg crosses. 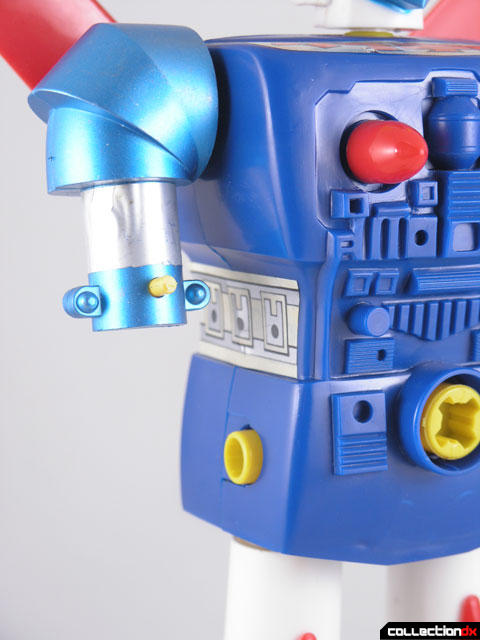 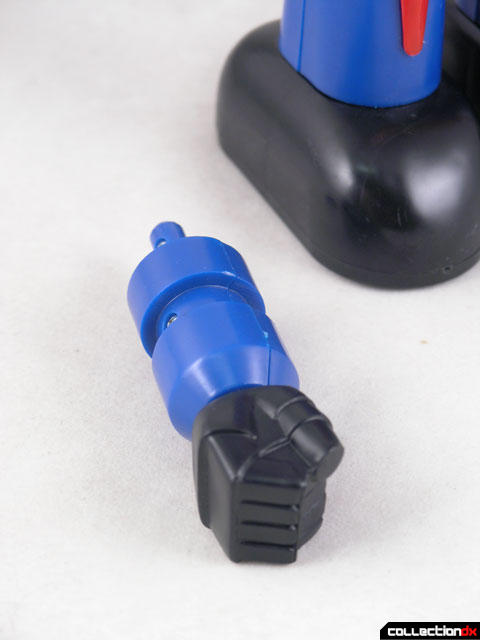 In theory, there are hundreds of different combinations you can make with this toy. Unfortunately, we can’t show them to you. First of all there are two large yellow wheels that attach to the side that were left in his display case at home. Secondly, the rubber tank treads had never been removed from their plastic bag, and Mr. C-10 was not about to tear them out now. Such is life.

But hey, I got pictures – and what a glorious thing this is. Its huge, maybe a foot tall, and even un-motorized it has a great shelf presence. 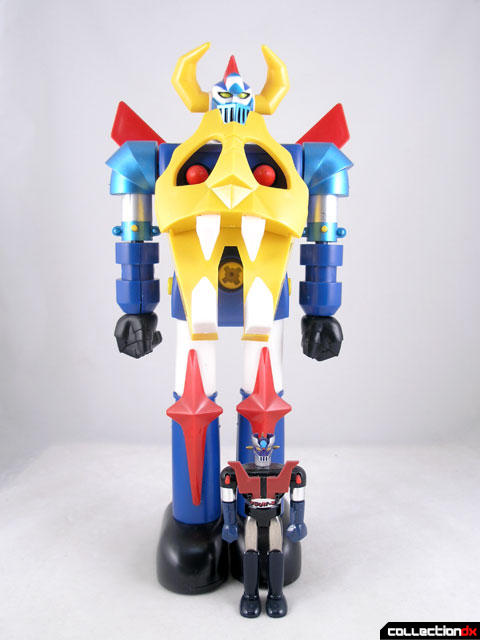 I mentioned that this came to the US as Zargon, from the Shogun Warriors line in 1978. The only change made to this toy was that the upper arms on Zargon are white instead of blue.

Thanks again to Josh Fraser for allowing me to shoot this toy for CDX.

7 comments posted
Oh my head, that is freakin'

Oh my head, that is freakin' amazing!! I'd only ever seen the Zargon version and never thought twice about it. I always saw it as some sort of corny Jumbo Machinder wannabe. Really a toy trapped between the missile-firing vinyl/fish-eye lens vinyl and the JM...two paragons of vintage Gaiking toyness. And if you look close, the off-color upper arms aren't the only thing wrong with Zargon; the eyes are red. And to me, that looks terrible.

This original Mecharobo Gaiking, however, looks incredible with its accurate colors! Once again, you (both Joshes) inspire me to greater vintage heights!

By the way...got around to watching the new Gaiking series...like spent the weekend doing that. WOW..I really liked it.

I enjoyed seeing the old skool references as well.

Just a quick side note.

I had written a multi paragraph response on the differences, but it got lost, so I will keep it brief. ;-)

The eyes of the MechaRobo are yellow with black eyeline (Guyliner..or say GAI-Liner)outlining it. The Zargon is red without an outline. I prefer the original color choice as, it is more in line with the Toei color scheme.

The metallic blue still appears on the head, but at a slightly less saturated tone. My theory on the removal of the shoulders and arms of the blue metallic, was it was either a production cost issue (metallic paints cost more) or it was a playability issue, as the paint on the Mecharobo was not primed underneath, and the paint is notoriously fragile. A potential toxin hazard for kids.

C-10 for vintage toys? Wow! I consider myself lucky to have a vintage toys. But this is a C-10! Double Wow!

It is more of a burden than a blessing....sometimes I wish I would lighten up and just not worry about silly things like boxes,and just play with the toys. ;-)