Gurren Lagann is the mecha du jour which means "nerds really dig it right now". While people really dug the Diecast from Konami, they found the price tag prohibitive. Well, Kaiyodo comes to the rescue with their Revoltech Gurren Lagann. This toy marks the 50th entry in the Revoltech Yamaguchi line and comes courtesy of HobbyLink Japan. 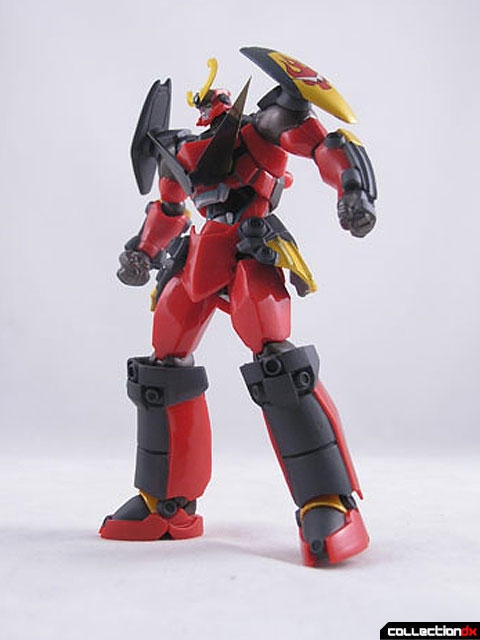 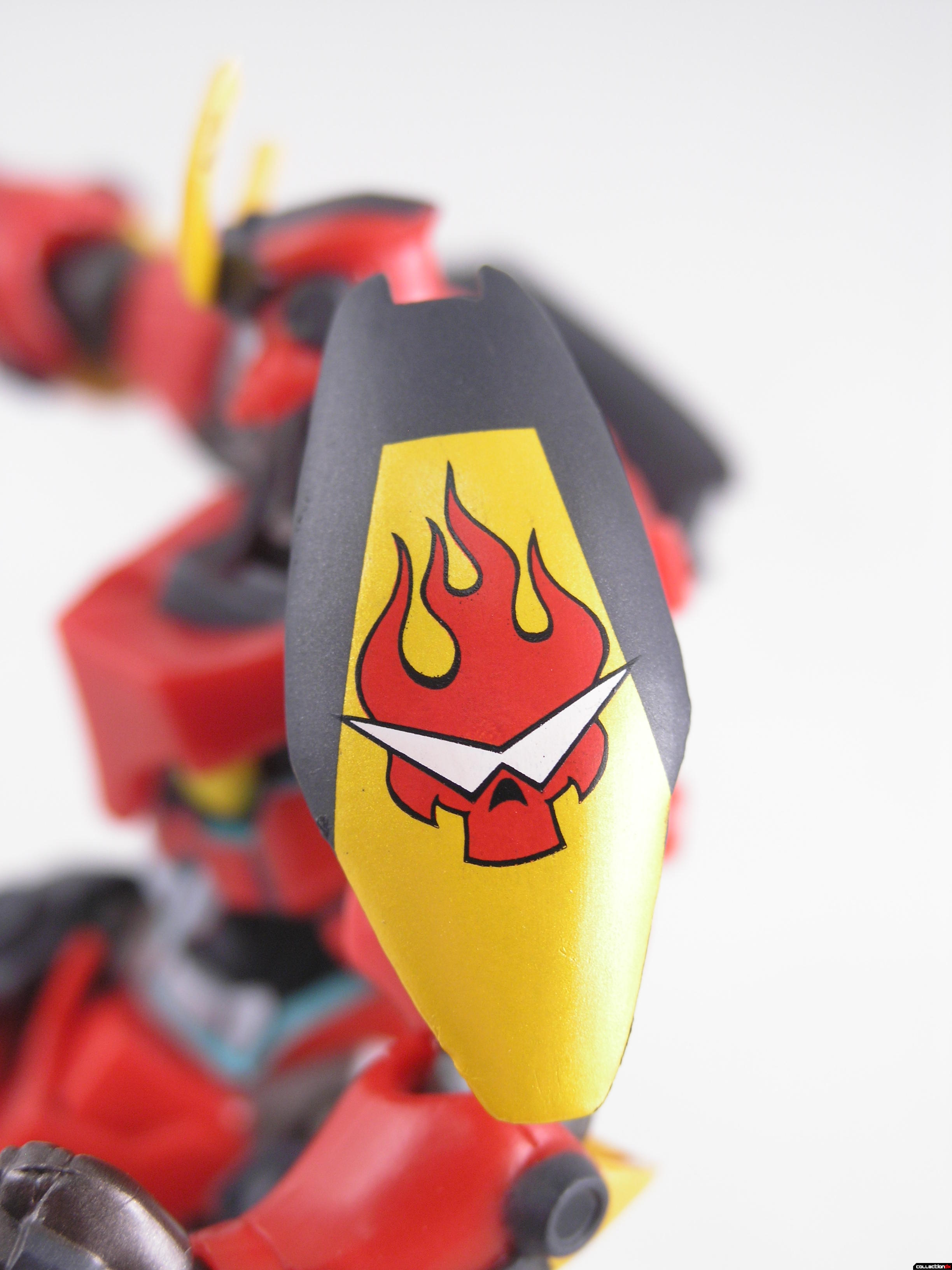 What really sells this toy is the character. The Revoltech aspect is pretty standard - 54 points of articulation from 19 Revoltech joints. But it's the cool design of Gurren Lagann that make this what it is. 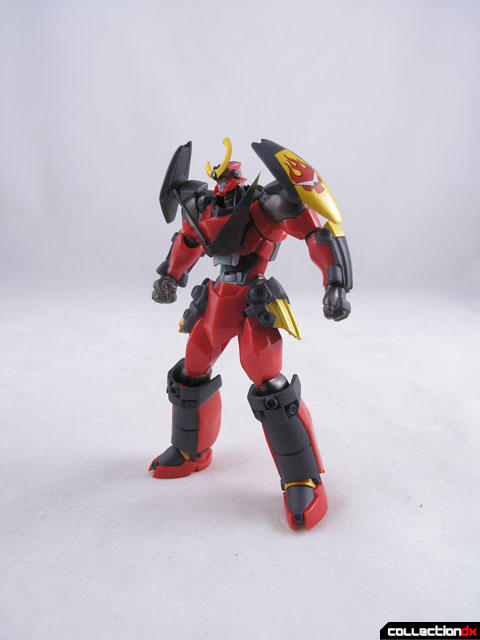 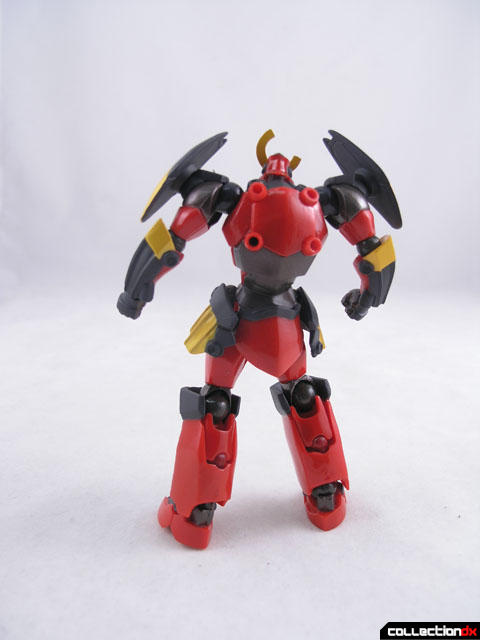 Gurren Lagann comes with two heads - One with a normal face, and one with an angry face. The heads swap easily on the dual Revloltech joint neck. 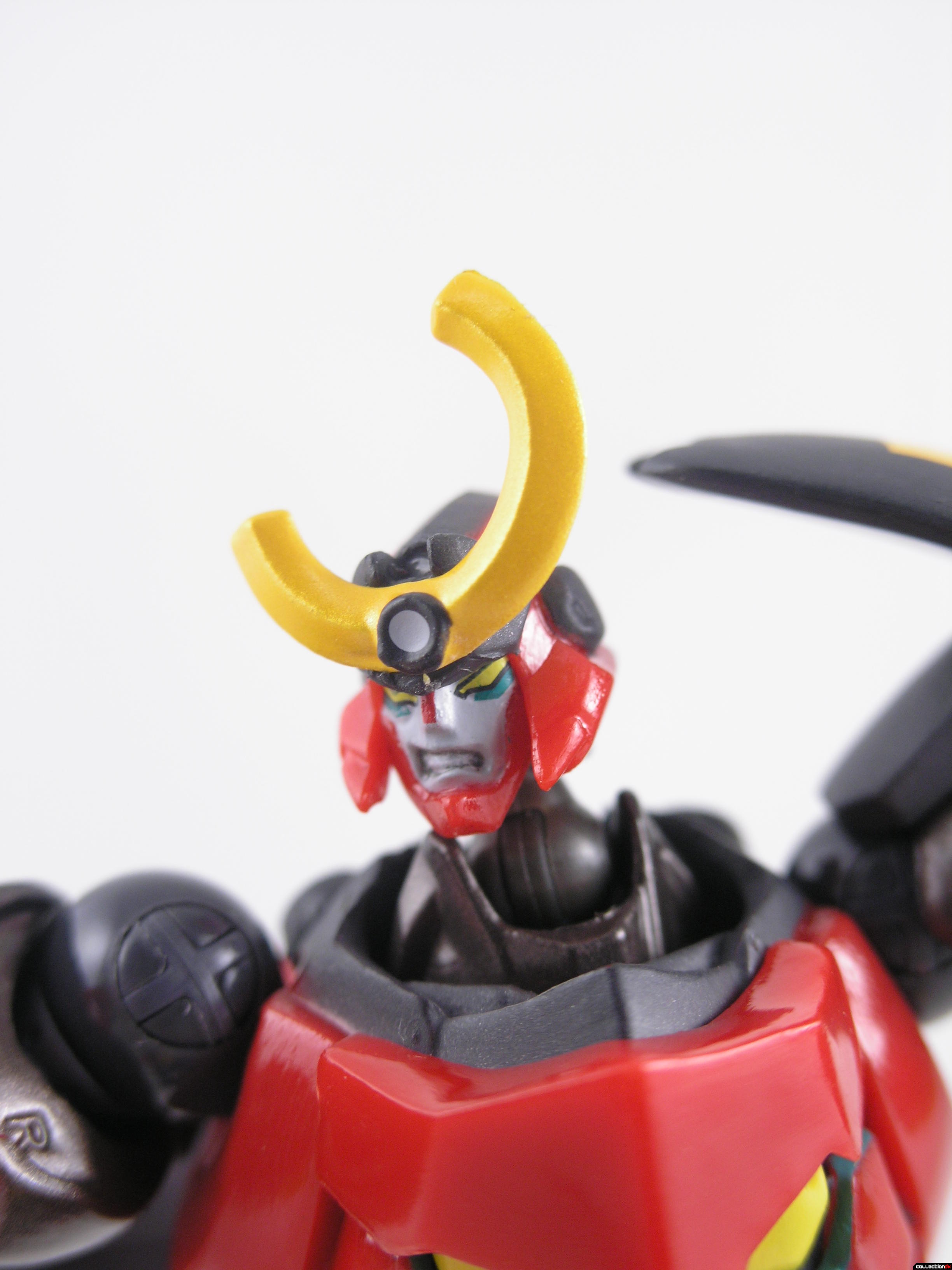 Included are various hands, including the mandatory "I'm pointing my finger to heaven for no apparent reason" hand and the "Hey buddy can you spare a dime" open hand. 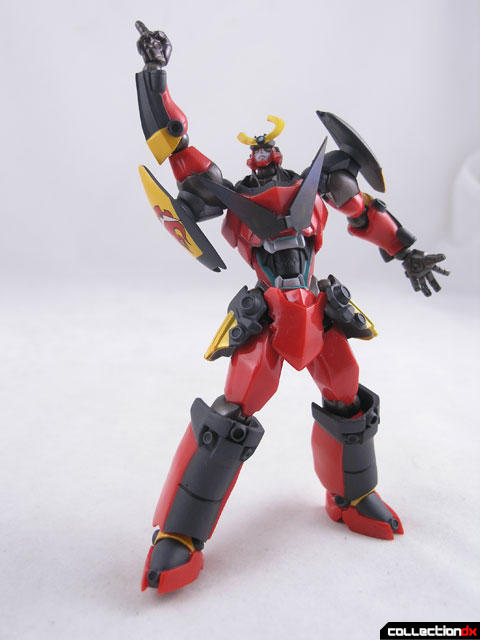 Weapons include the ginormous Gurren Sunglasses and finally, a core drill. First, the Sunglasses are stored on its chest until they are needed. Then the figure can use the included option hands to grab a larger sunglass weapon to use as a kind of boomerang. Since the glasses are now gone from the chest in this mode, Kaiyodo included an option replacement part. But heed this warning - be careful when removing the sunglasses on the front of the figure. 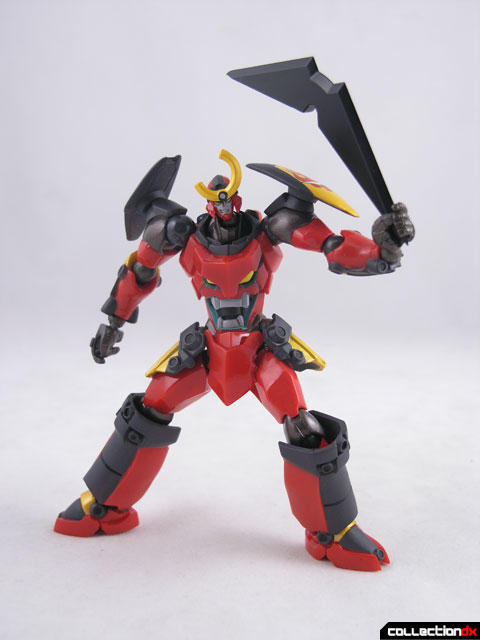 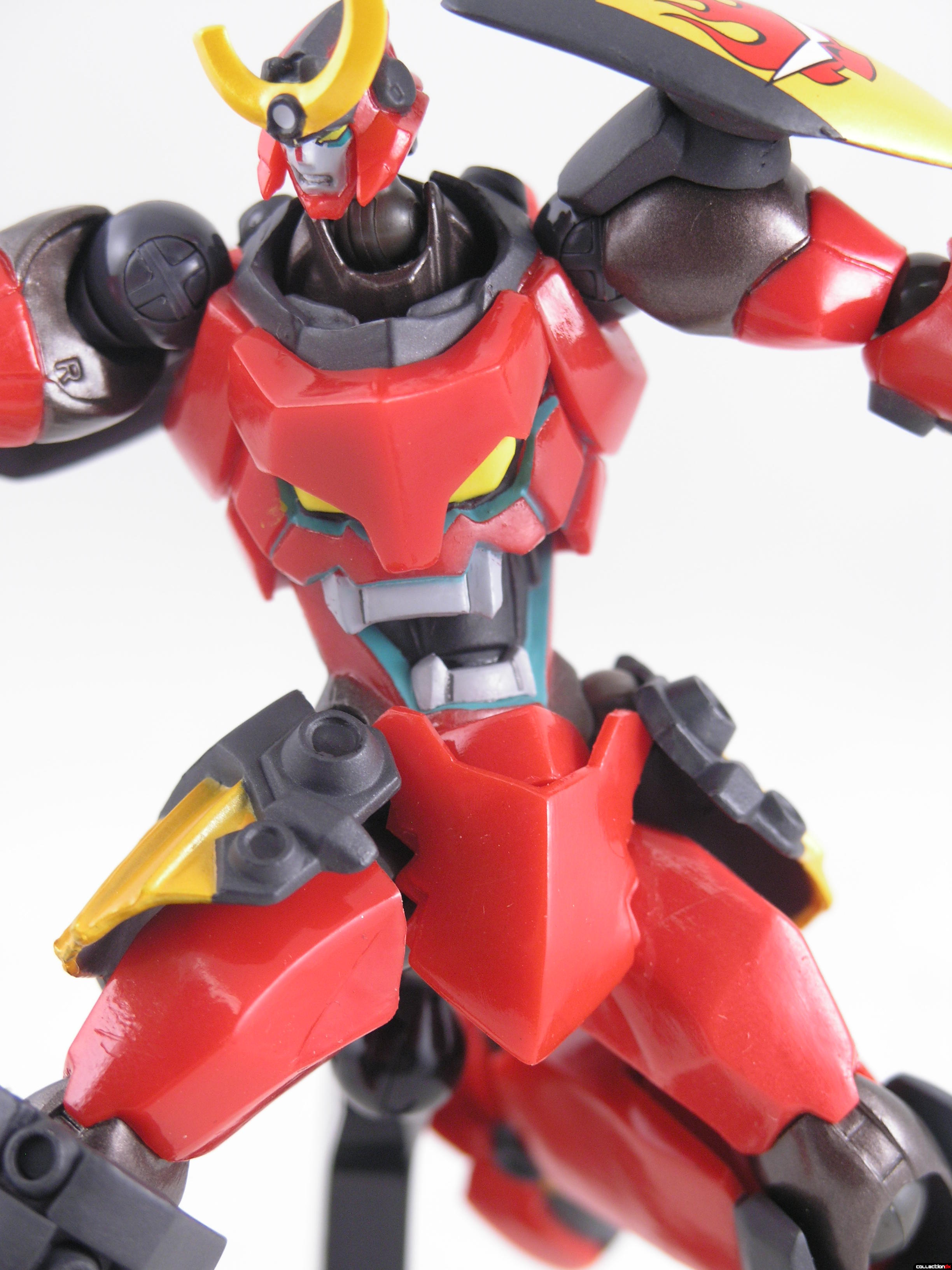 You need to remove the whole red piece, not just the glasses. They can and will break off if you are not careful. I broke mine off, but superglued it back on.

The Core drill comes packaged as the key used to activate the robot, but you can separate the key into two parts and use the drill part as a weapon. 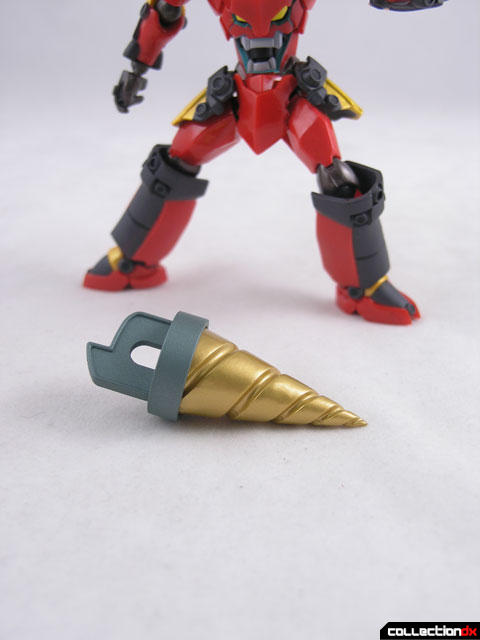 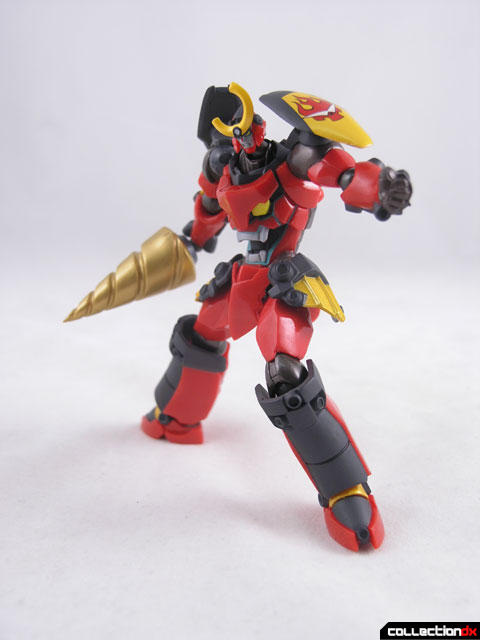 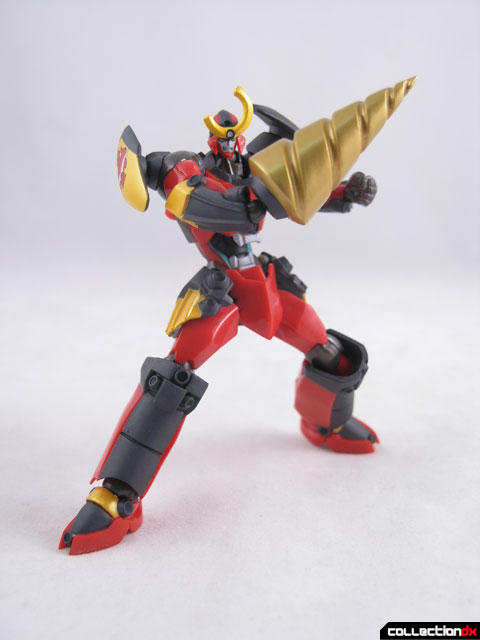 On the back of the lower legs there are panels that can open out by smaller Revoltech joints. I have no idea what these panels are for. Maybe something from the show? If you know, let me know. 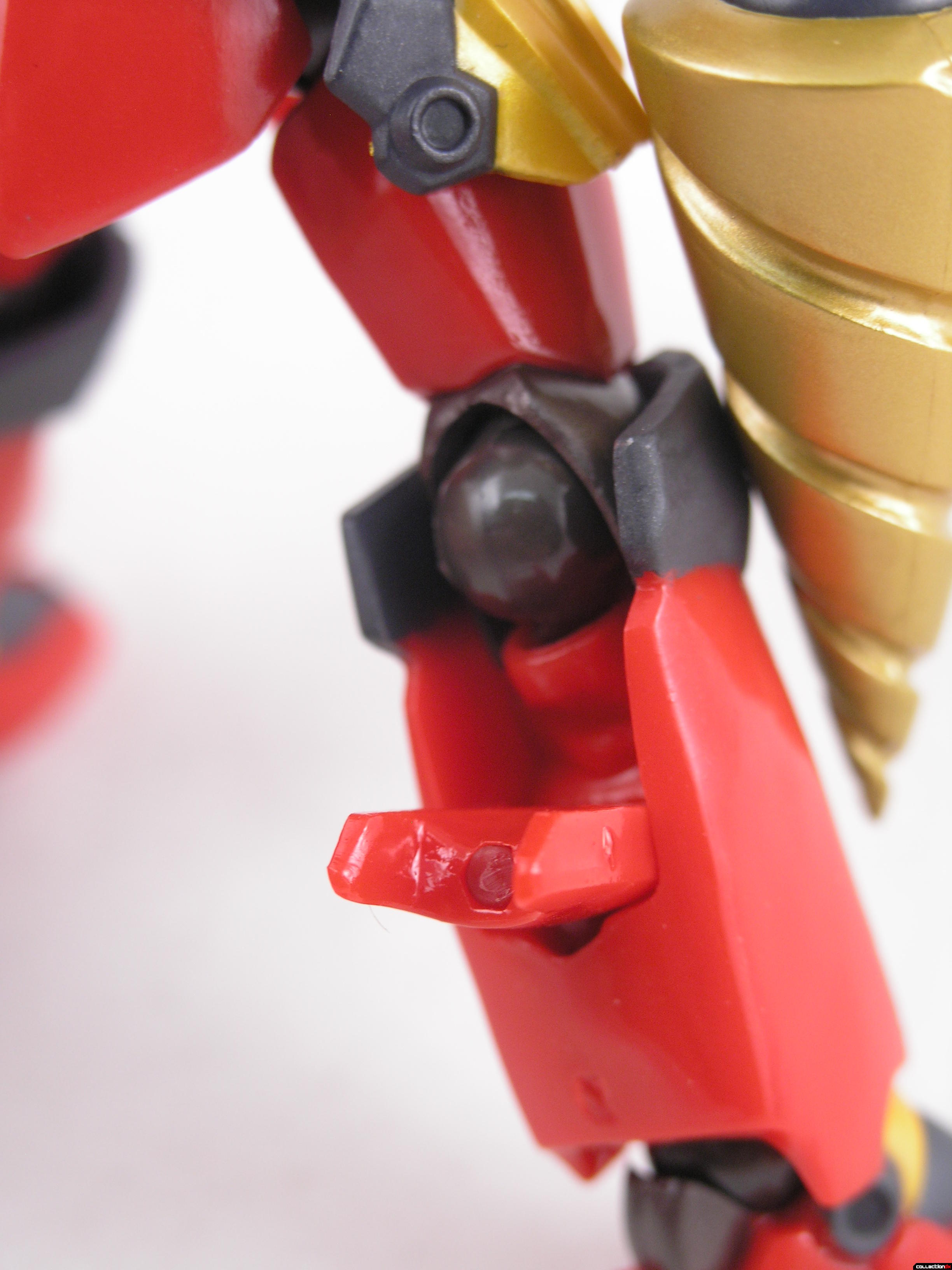 Included is the standard Revoltech stand, which comes with a Revoltech joint for dynamic posing. 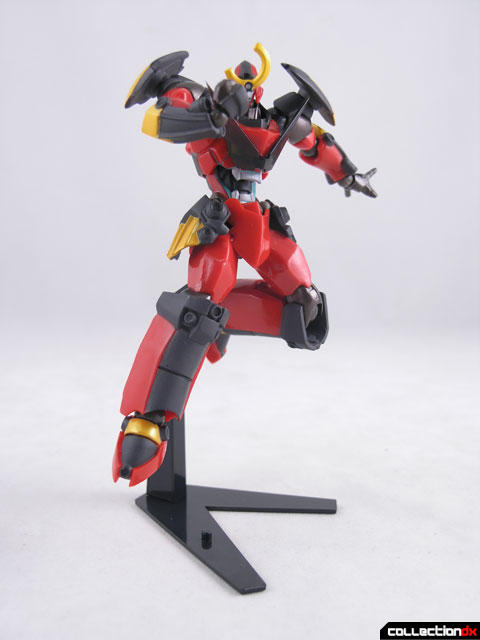 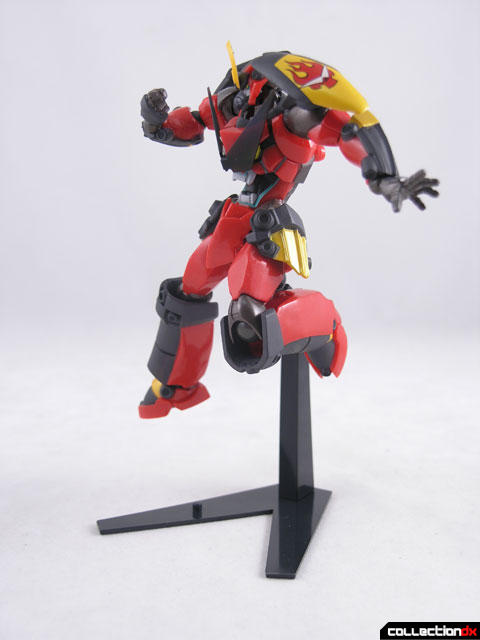 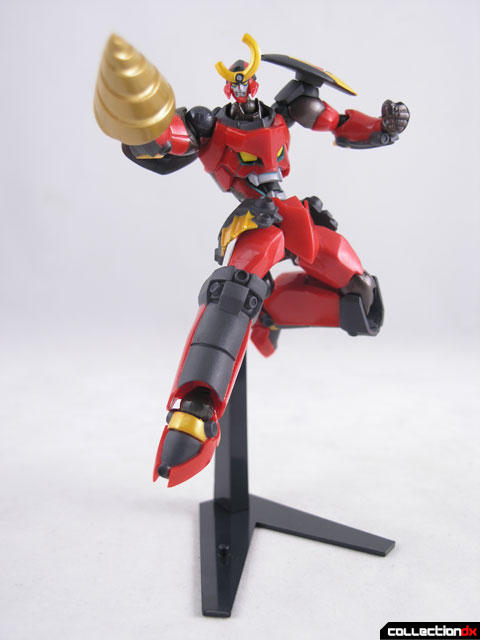 In case you are wondering, there is no Gurren Wing - Parts for that will be included with other Gurren Lagann Revoltech releases. 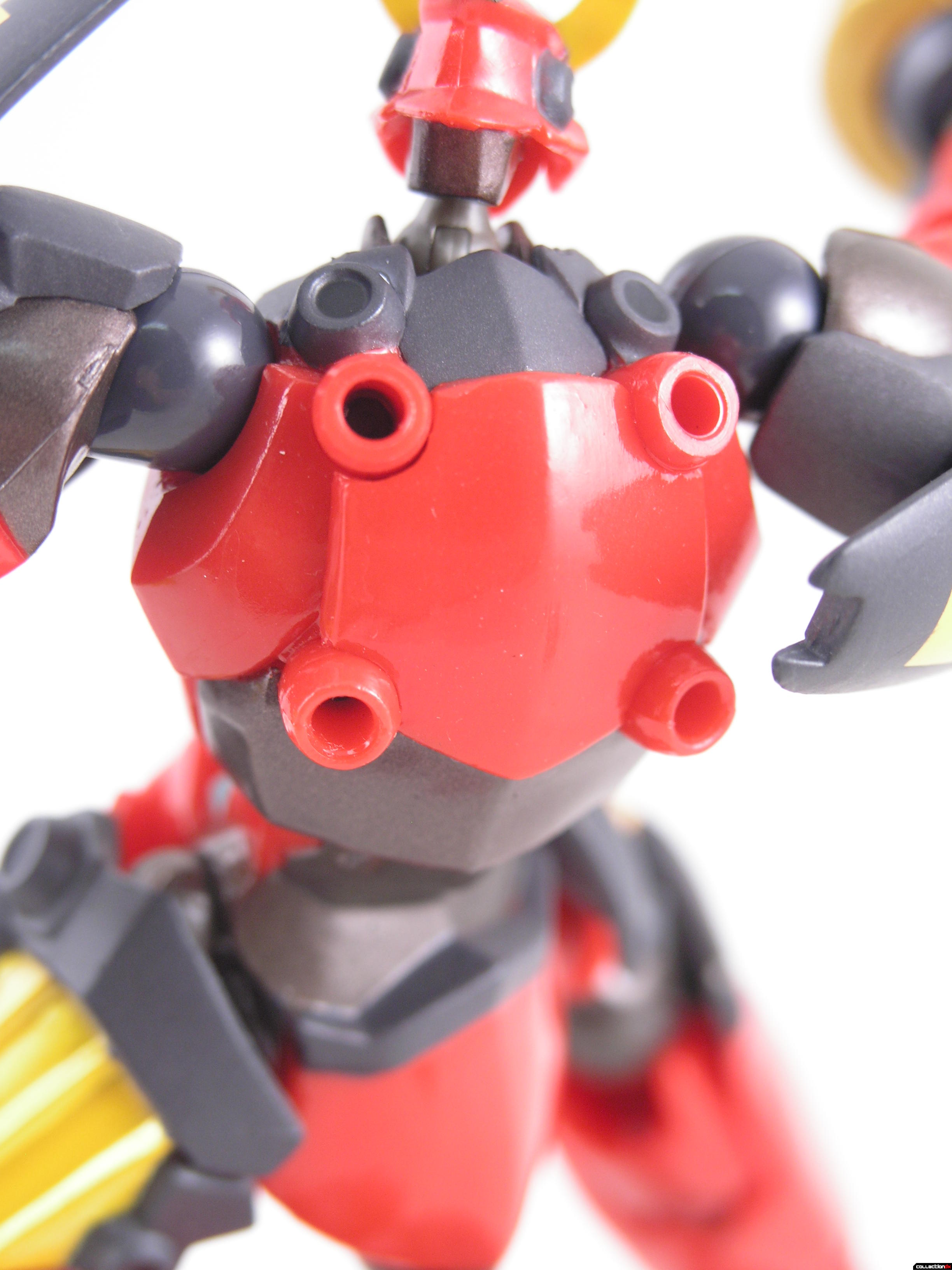 This one is a must-buy for both Revoltech and Gurren lagann fans. It has awesome styling and great construction. You can get yours at HobbyLink Japan.

The leg panels supposedly compress inwards (as opposed to pulling them out) when you bend his knees, much like the sliding panels on the back of the GI Gurren Lagan or similarly designed hinges on the legs of Kaiyodos old Virtual On figures. I don't know how well it works, necessarily, not having the figure, but according to pre-release previews of the figure, that's what it was supposed to be for.

Oh man, you're killing me with the Sam Black Church! hahaha And the black line is barely noticeable once you get going.

Anyway, pretty nice, but I'm not a big Revoltech fan personally. I think if I were to buy a toy of this character, I'd get the 35cm vinyl. It's big and cheap.

This was the one revoltech I was looking forward to, but there's something I'm not feeling from it. Hm...

Nekrodave, you have any links to that 35cm vinyl you mentioned?

Not sure if any online retailers are selling it, but I saw it on Yahoo!HK the other night. I'm sure it'll be on Yahoo!JP too. Just search for グレンラガン. It's made by Konami, like the diecast.

It's just the Lagann part. Although this trailer is a bit, well silly, it has it.
http://youtube.com/watch?v=HAAOQHhoyzA

I forgot to add that you should probably yell it every time you say it too.
Haha.

That trailer has become a joke because they are NOT pronouncing it correctly.

It's not pronounced like "Kenny Loggins" for God's sake.

It's pronounced LAG-en. This video has it just after the 4-minute mark.

I know the trailer was a joke, I just thought it had a good example of the pronunciation.
In any case, yeah, LAG-en.

It will interesting to see how the dub goes. Interestingly enough, Bandai is apparently going to release a bare-bones subtitles only version first, so fans can get it before the dub is complete. I think it's way cool of them to do that, and will probably stick with that version, although if the dub turns out good.....

You might be interested that Sci-Fi will be having a Gurren Lagann block starting in July, which is also when the sub DVD goes on sale.
Interesting.

Between the two of us, the word 'interesting' has been propelled to new heights. :)

I find your use of the word interesting intriguing.

That's not interesting news dude. Who needs Sci-Fi presenting the show when you got the internet. From where I'm standing, that's lame news.

Well in the show they didn't exactly use an uber special string. Maybe you can take another necklace's string and attach it?

What does ¥1,900 exchange for in american dollars these days?

and what was the price of Konami's version that made it "prohibitive"?.

Bookmark this site, it's a real gem:

It keeps accurate every minute will the listed world currencies therein.

hmm this might be my back up choice if I cant find a reasonably priced konami one, thanks for the review!