Two (2) AAA batteries (not included) are required to operate the electronic light-&-sound feature, and should be replaced by a responsible adult. These are best replaced when the toy is in robot mode.

Home to the universe's only mega accelerator, the Astro Megaship is owned & operated by space wanderer Andros, who seeks to find his long-lost sister Karone amongst the stars. With the help of four powerless Turbo Rangers from Earth, they both seek out the inter-dimensional sage Zordon to save him from destruction. But in time of need, the Megaship can switch forms to become the powerful Astro Megazord. The first of four transformable robots from "Power Rangers in Space", the box contains the Astro Megazord's body, Mega Shuttle, Megazord Saber, Megazord Shield, a hand-held cannon assembly, a collection of loose PVC parts, a sheet of decals, and black-&-white instructions. The toy is divided into two halves: 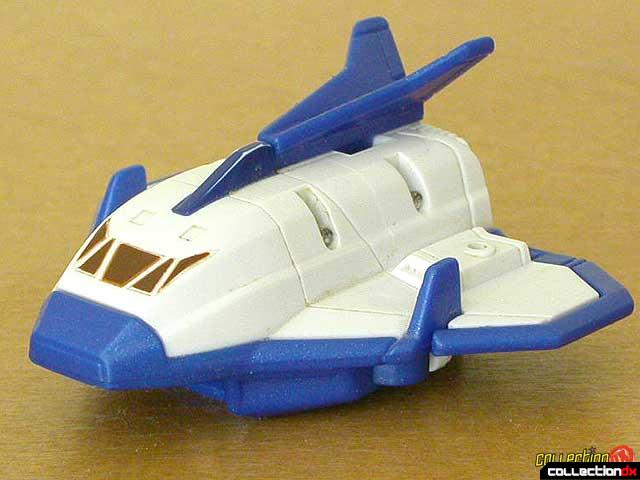 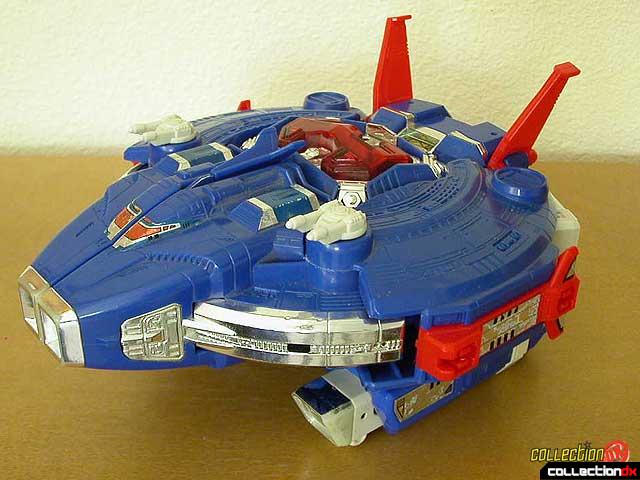 In flight mode, the Megaship is a compacted flying saucer shape, with two tall red diagonal stabilizers on top of the engine housing, a set of cargo & access bays hanging beneath which also serve as landing pods, and a pair of twin energy cannons to either side of the main bridge. The turrets can spin a full 360º, but the twin barrels cannot pitch up or down. When not in use, the Mega Shuttle is stored in a large bay inside the split section of the nose; the only sign of its presence being the V-tail stabilizer projecting above the hull. The hull detail is quite impressive and well executed. To simulate flight, you can either hold it in your hand, or roll it along a smooth flat surface using the four wheels on the bottom of the landing pods.

The light-&-sound features have an On/Off switch that must be toggled to work. Then, in the center of the upper hull, there is a transparent red formation with two buttons on it. Holding down either button will make a different sound accompanied by a different light-flashing pattern. There are only two sound/light patterns available- one is a high-speed blaster; the other simulates engine noises. Either sound only lasts about 1 second, and will only work or repeat when holding down the respective button.

Transformation is fairly straightforward, and very easy to master-

A neat little thing about attaching the Mega Shuttle is that when it is snapped on, and the power is on, an automated light-&-sound feature kicks in. The lights flash in a different pattern, and there's a new sound of servomotors turning and metal coming together. This sound effect lasts about 2 seconds, and only happens when the Mega Shuttle is attached or removed, and the power is on. This is actually a rather unique feature among all of the Super Sentai mecha toys from the last almost-two decades- activating a light-&-sound feature using a hidden switch. 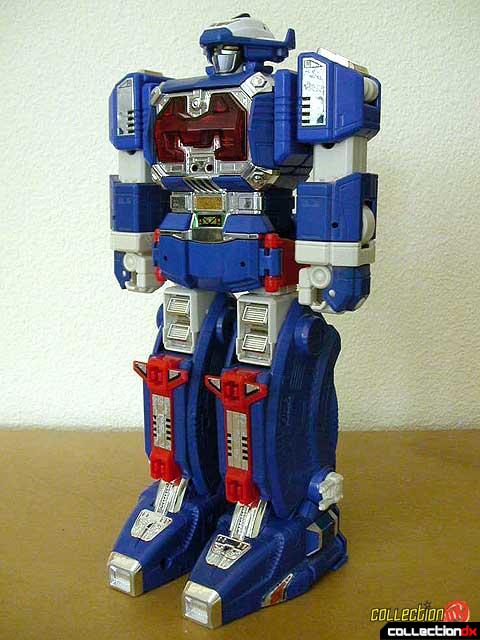 Very well proportioned compared with many of its own kind, the Astro Megazord is well detailed and solid. The joints are nice and tight, and the decals don't take away or distract from the overall look. The arms rotate 360º at the shoulders, and snap at every 30º. The knees and ankles, while not really for action poses, can be moved into some interesting positions for a look of flying through space. The two small engines for the Mega Shuttle hang off the top of the shoulders and act as the main propulsion for the megazord. The only paint apps on the entire toy are the face of the megazord, and the cockpit of the Mega Shuttle. My only complaint might be that there was no joint at the elbows or shoulders; I can accept what they did with the legs.

The Astro Megazord has mostly silver-plated plastic for highlights, though the amount of red plastic is just enough to be noticed, but not overlooked. The only lack of detail anywhere that I would complain about might be behind the lower legs. There are a few studs that look a little out of place, but it's easily ignored when added with everything else. The light-&-sound features work just the same as in Megaship mode.

For accessories, the toy has three: the Astro Megazord Saber, Astro Megazord Shield, and Astro Megazord Blaster. The Saber is a soft, very light gray PVC weapon about 5 inches long. The blue plastic Shield is actually the belly of the Megaship, but split down the middle horizontally, and rotated in half. There is a small PVC handle for the Shield that the megazord can hold in either hand, though it's preferred on the left. The Blaster is actually the booster assembly for the Mega Shuttle, with a PVC handle and cannon barrel folded out. As an added bonus, the Blaster can separate into its three different components, and attach to the Megaship as extra armament . The two small turrets the Megaship uses are not used on the megazord, but are still capable of spinning all the way around. So, if you want to take a cheap shot at your enemy one day?

For those of you wondering what the differences are between the Deluxe Astro Megazord from "Power Rangers in Space", and the original Japanese version, the DX Galaxy Mega, from "Denji Sentai MegaRanger", they are subtle, but noteworthy.

Again, you'd only really notice the differences between them if you put the two toys side-by-side. And, I'm guessing that the sounds may be different, though I'd be surprised it they weren't, knowing the way Bandai America works. Aside from the subtle color changes in the plastic, Bandai America was really loyal to the DX Galaxy Mega when they brought it over here, which is quite rare for English-speaking audiences, but is greatly appreciated.

Though the Galaxy Mega was only shown in "MegaRanger", the Astro Megazord was retired at the end of "Power Rangers in Space". Then, in the beginning of "Power Rangers Lost Galaxy" the following year, we find that the Megaship was turned into a museum, and rested for years on Earth. Merely a shadow of its former glory, the old and underpowered Megaship was hijacked by a lone GSA officer- from the Earth space colony vessel Terra Venture- in order to travel to the planet Mirinoi to rescue a few stranded colleagues. (It is possible that the technology from the Megaship was used in the construction of Terra Venture, but this is just a theory.) After the rescue, the Megaship served the Galaxy Rangers well as a long-range, deep space transport, though it was unable to change to megazord mode because the Mega Shuttle was elsewhere. (The re-released toy version for "PRLG" is called the Deluxe Astro Galactic Megazord.) The Astro Megaship was self-destruct by the Galaxy Rangers in order to defeat the villains towards the series' end. In 2002, in the "Power Rangers Wild Force" episode "Forever Red", Red Space Ranger Andros appeared in a cameo alongside the new Astro Megaship Mk. II, which was identical to its predecessor and built by the humans of his native KO-35 colony. It has not been seen since then.

The Astro Megazord is the first (and only, as of this 2005 review) megazord in Power Rangers history that does not have one Zord for each individual Ranger. And this pattern has also not been repeated in Japan since the 1980 series "Denshi Sentai Denjiman"; with its solo-transforming giant hero mecha Daidenjin (trnslt: 'Giant Electric Man'). Since then, there have been at least two vehicle-, animal-, or human-shaped robots involved in every change. While some may think the addition of the Mega Shuttle eliminates the uniqueness of the design, I do not think that it is enough to change its position in Super Sentai history.

Of all the space ships and transforming robots I've seen in my two decades of life, this one is certainly one of my all-time favorites. It's fast (it can traverse the diameter of the universe in a few days!), it's flexible (space cruiser, or giant robot for urban/space combat), it doesn't require a huge crew (five Space Rangers, or equivalent), and it's simple yet effective (guy in a blue & grey boxy stunt suit who can't speak English). If you prefer original Japanese imports only, go for it. But, don't let the Deluxe Astro Megazord slow you down. I love it! 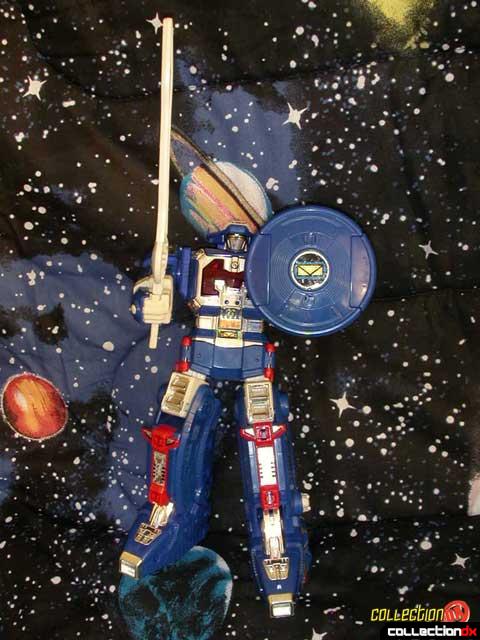 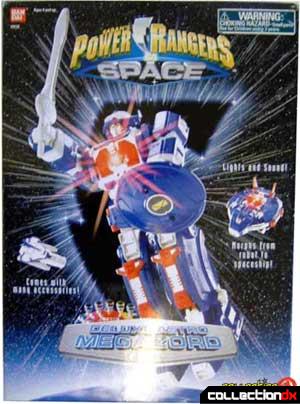 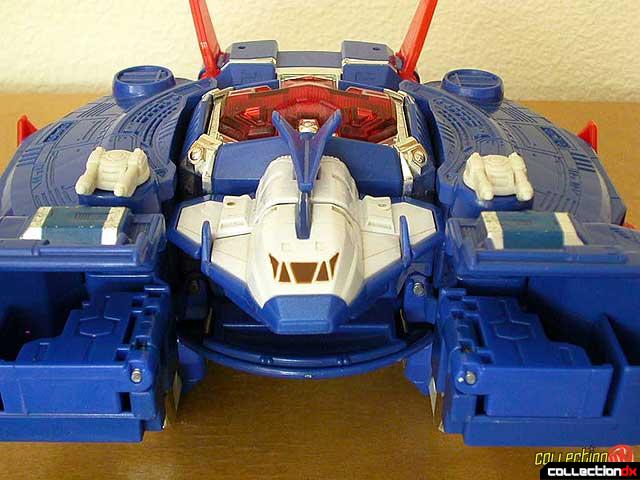 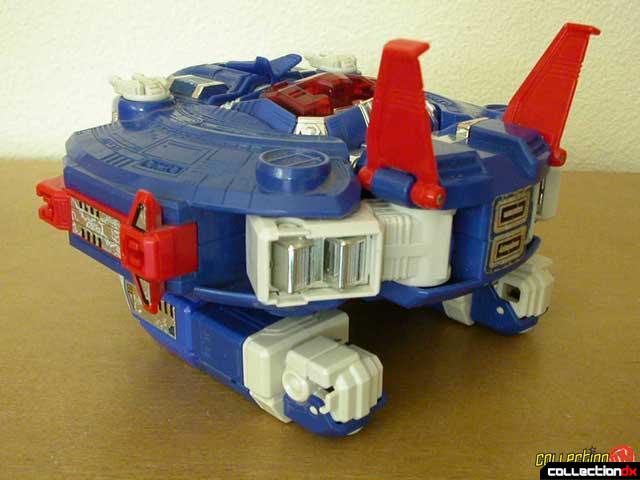 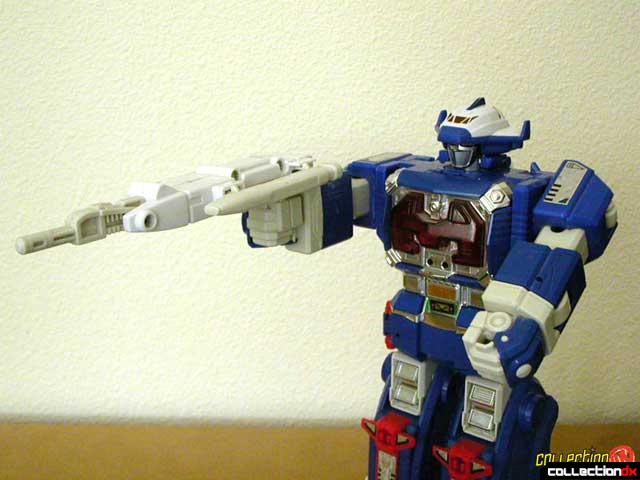 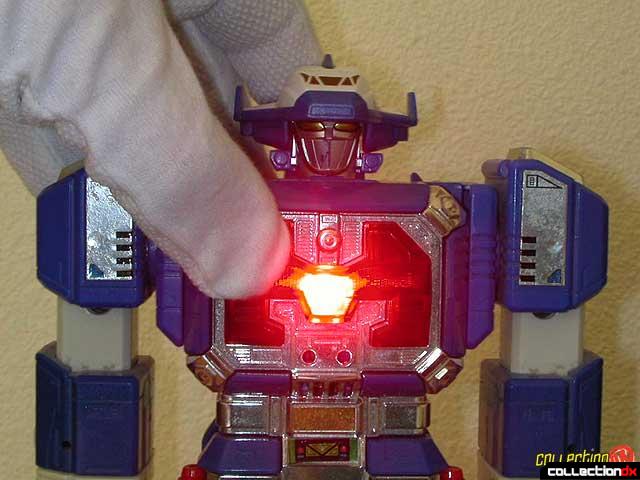 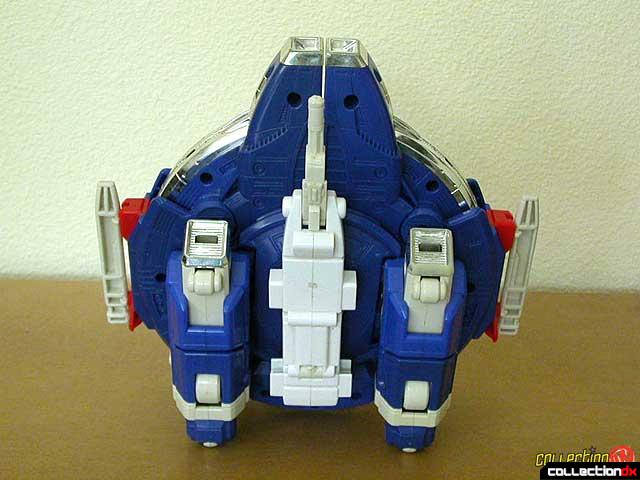 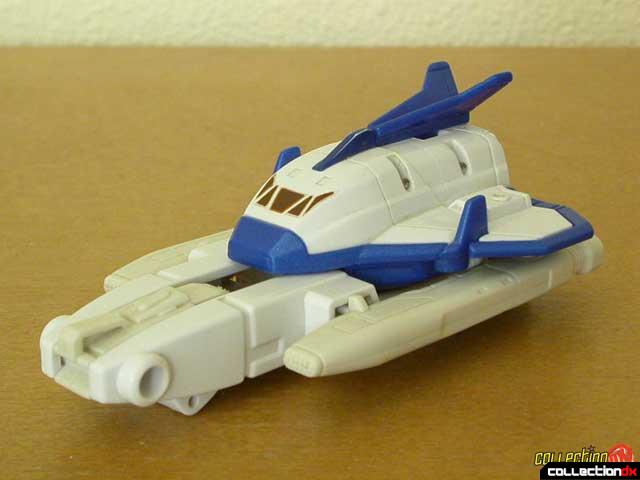 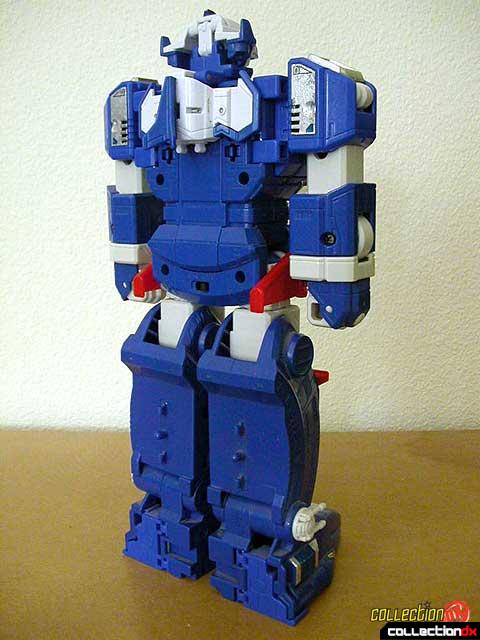