Growing up in Boston during the early 80's, I was subjected to the channel 25 phenomenon know as FORCE FIVE. For those of you reading this not old enough to remember, or never watched Force Five. Let me give you a brief explanation. Force Five was series of Japanese anime shows, that were dubbed in English, and brought to America by Jim Terry productions. The show was actually five different shows, a different show depending on the day of the week. The lineup was the following:

Friday was always my favorite day of the week. Not only did it prelude the coming weekend, but it also brought a new action packed episode of Gaiking. Gaiking was my favorite show and was the true catalyst for my eventual Japanese toy obsession.

When I found out that they made a new Gaiking Show, (Gaiking: The Legend Of Daiku Maryu), I was very excited. In conjunction with the new show, Bandai released the GE-10 Gaiking. Being that Gaiking is my favorite anime character, I just had to have it!

With all the above being said, I will be reviewing Bandai's GE-10 Gaiking: The Legend Of Daiku Maryu. 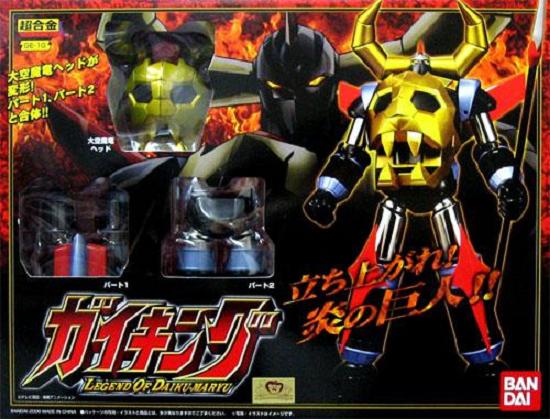 As you can see, the box of the GE-10 Gaiking has that old school feel. The box displays the 3 parts that comprise Gaiking behind cellophane windows. The box also has a cool illustration in the background, as well as a picture of the assembled figure to the right. Upon opening the box, you will find similiar packaging to other Soul Of Chogokin robots. Unlike the GX-27 SOC Gaiking, this version has much fewer parts. I find that having fewer parts is refreshing. Less parts to lose and easier to display. The figure comes with 2 sets of hands, Gaiking Lance, Gaiking Axe, Gaiking Shield, and Counter Lance. 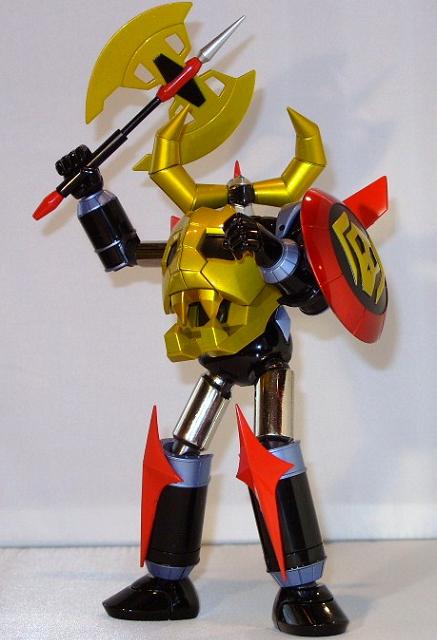 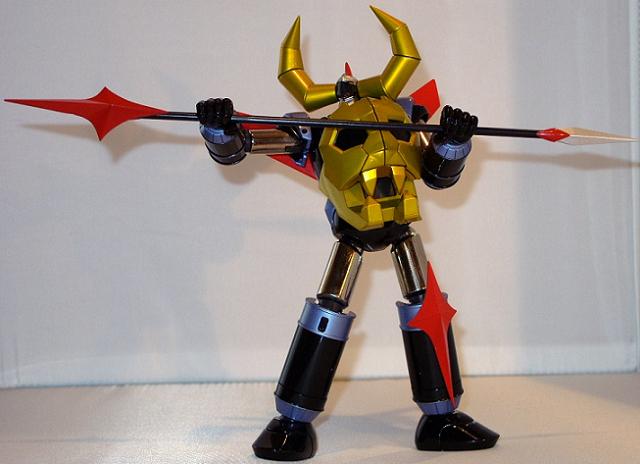 Assembling the figure out of the box it quite easy. The transformation is exactly the same as the GDX Gaiking reviewed by Sanjeev a few weeks back. The GE-10 Gaiking has substantial die-cast content and once assembled, the figure is very solid and poseable. All joints feel really tight and the knee joints ratchet. Chest plates and face place are removable, allowing you to display it in "Phase Open" mode. The "Phase Open" mode kind of reminds me of hot dogs on a grill. 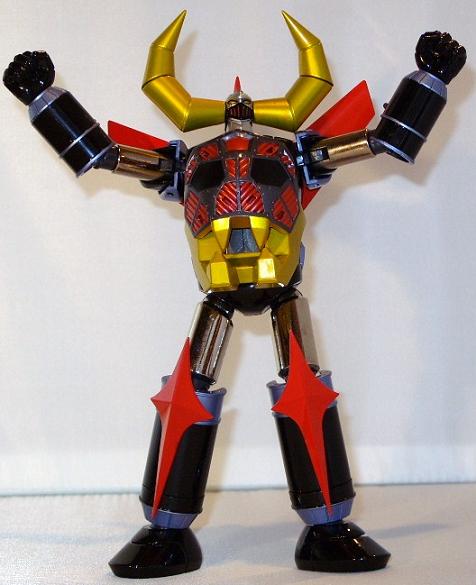 Like the GX-27 version of Gaiking, you can open the mouth on the chest for some cool poses. 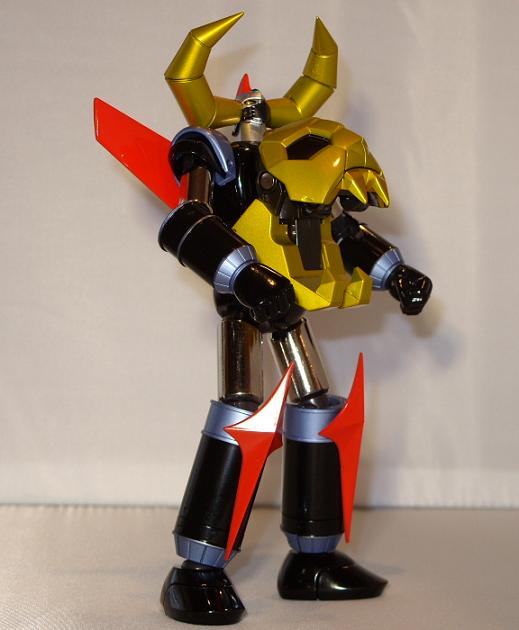 When separated all 3 parts and weapons fit nicely on the custom display stand. 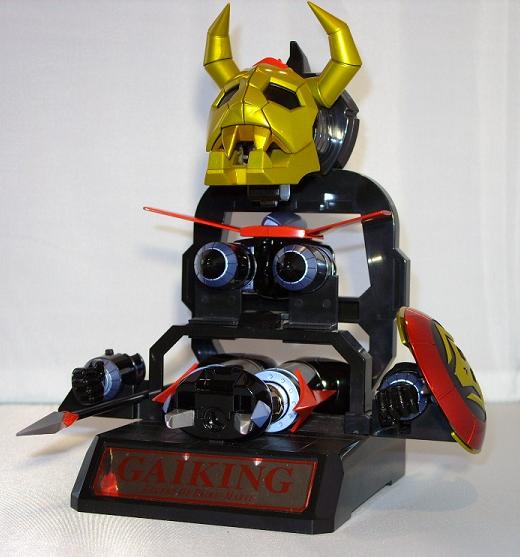 Fun Fact: Many parts are actually interchangeable between the GX-27 SOC Gaiking and the GE-10 Gaiking. If you own both, let the fun begin!

Overall, I really like this version of Gaiking. It can be had relatively cheap compared to the SOC GX-27 (I purchased mine for $30 USD). Even though the GE-10 Gaiking shares a lot of the same charm as the GX-27, it's not without minor flaws. Like the GX-27 Gaiking, the GE-10 Gaiking versions collapsible leg detent is weak and the leg collapses very easily. Also the firing fists have a hair trigger and tend to fly off when handling. Even with the mentioned flaws its still s great figure. Capturing much of the essence of the original GX-27 Gaiking. The GE-10 Gaiking figure isn’t better but its a close second and worth adding to your collection.

Nice review, But only thing bug me...on mine anyway, is while I like the chogokin, the removable face parts pop off often and easily, wish it was one piece not four (was actually annoyed when it was 4 pieces not one)

Sorry to hear about the problem you have with your Gaiking. Fortunately I did not have that problem with mine. However, I do agree that they probably should have made the removable face plate on the chest one solid unit.
-Dan

Ya really just can't have too much Gaiking, huh? :P

Hmmm...the Counter Cross attaches to the spear, huh? I wonder if the Most Wanted version can do that! Yet another undocumented feature???

Thanks Sanjeev,
Yup, the counter cross attaches to the spear. Let me know if it does it on the GDX version. I am seriously considering buying the GDX set. Like you said "Ya really just can't have too much Gaiking"
-Dan

Speaking of Gaiking, it reminds me 2 weeks ago at my local Toyfair. There;s this guy that sell Most wanted Gaiking for a very low price. And I just skip it... What a fool

Where were you able to get it for $30, if you don't mind me asking?

Wow your right! The prices have really gone up. I picked this figure up about 5 months ago. At that time the GE-10 was abundant on Ebay and they could be had cheaply. I think I paid about $15.00 for shipping. The grand total was around $45.00. I do not include shipping charges in my reviews because that will vary depending on where you live. I'd say that if you like this figure, grab one now before the price gets astronomical.
-Dan

compared to the anime show, the toy seems rather gaunt, doesn't it?
...or perhaps it's just me.

I used to own this but sold it because the chest/ face plates kept falling off and the fists would shot off very easily.

Mine is perfect. I love the figure. Very nice die cast content for the price line! And say what??? The fists fire! Oh yeah.
Thanks Shogundan.
Grandzinga....

Well, not much difference between the two. All I can tell is that the teeth on the skull of GE-10 is gold unlike GX-27's silver teeth. And GE-10's skull is removable for it's Fase Open mode, whereas the SoC version is one solid piece. GE-10 also has additional weapons. O yea, I forgot to mention that GE-10 has a black mouthplate whereas the GX-27 and even the GX-05 Gaikings have a silver mouthplate with grills on them.

JUst got my GE-10 and I am very happy with the size and added weapons but i am ticked off about the face plate. I love the " Chest Open " attack from the show but the pieces just fall off of the chest too easy. The battle axe, shield, and wing fall off as well. Nothing seems to stay on this guy very well. He is big, sturdy and looks very cool but is it so hard to keep his wings on his back? still i can not say i am completely disappointed with Gaiking. I have loved this character since i was little. The fact you can adjust his gigantic horns is enough for me to give this toy a thumbs up. I have some paint defects as well but still i love this guy. I guess i am a total sucker for force five Chogokins.