So here is a little story about how CollectionDX really started whether Josh admits it or not. The story about the first Japanese toy I got from Macross, the first toy that cost over $100, the toy I brought over the Pacific Ocean, the toy that survived a house fire, the toy that I nonchalantly gave away a few years later and how it came back to me.

May, 1986. Honolulu, Hawaii. I am 13 years old and about to graduate from Junior High and at the beginning of the summer we are moving to Massachusetts. There was a small hobby/toy shop that opened near my school and I had become friendly with the owner. 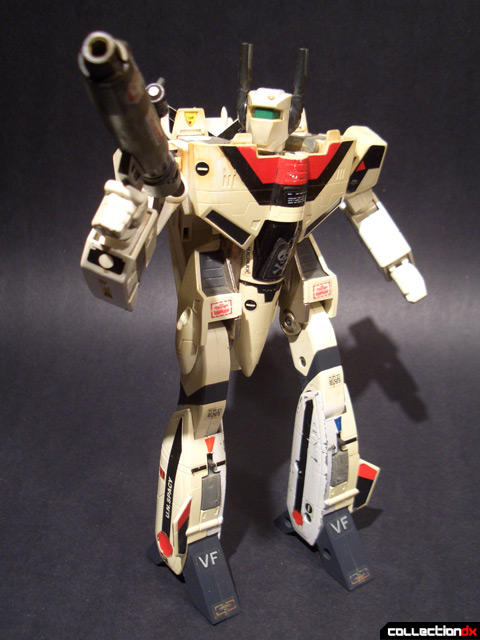 I would stop in day after day to chat and stare at the Valkyries he had for sale with their prices keeping them firmly out of my reach. Then one day the Hikaru Strike Valkyrie from the movie disappeared from the shelf. Now I would never get it!

Turns out, Mom bought it and gave it to me as a graduation gift. I was overjoyed and loved it. Shortly after that I obtained a few more Valkyries. A few months later we crossed the Pacific Ocean and my growing collection of Macross and Mospeda toys came with me. 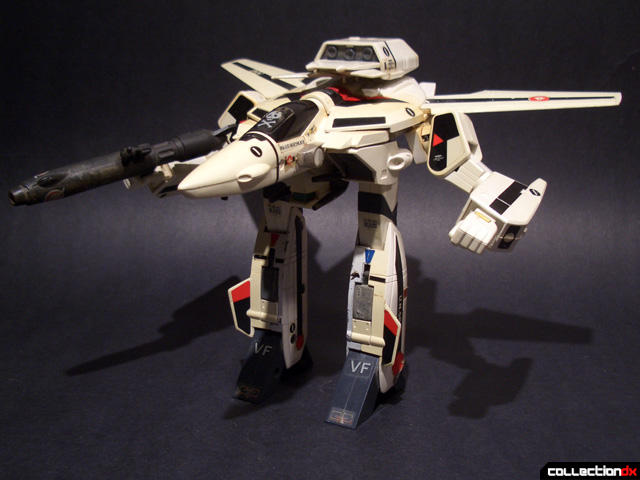 I started High School and as time went on the Valkyries ended up packed back up and in storage. After finishing High School we moved into a new house and the items remained in storage up in the attic until a few months later when we had a fire and lost just about everything we owned.

A terrible experience for sure, but no one was hurt. When we went back to see what could be salvaged it turned out the Fire Department had gutted the attic during the call and threw most of what was up there out the window three stories down. 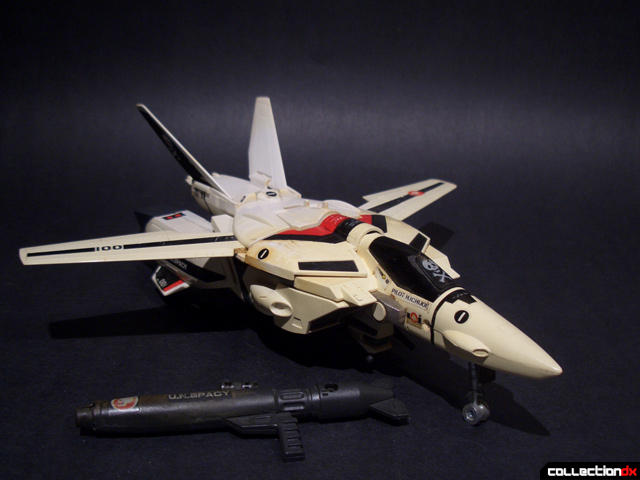 In the pile where most of my Japanese toys: Alpha Fighter, Cyclone, various Valkyries, etc. etc. The boxes were trashed but most of the toys where undamaged. My favorite one, however, the Hikaru Strike Valkyrie was a bit smoke damaged and most of the armor missing. I salvaged what I could and they kicked around the next few years on the shelf or in the corner. 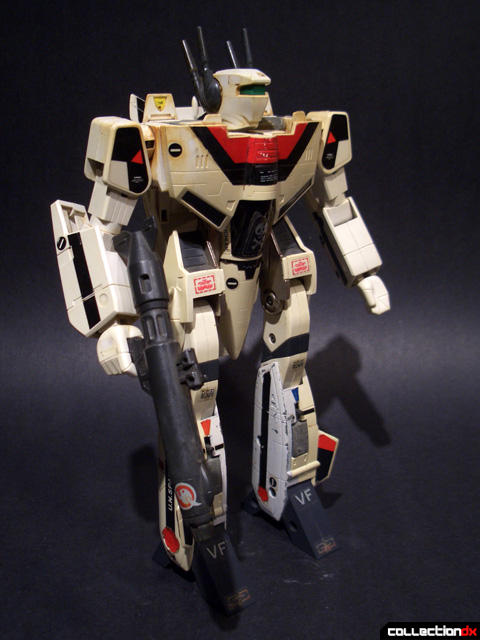 Flash forward a few more years, Josh and I meet, became friends and ultimately end up living together as roommates. At the time I felt I had “outgrown” my “toys” and I started selling them for stupidly low prices to the local comic shop but gave Josh the Hikaru. He was touched and made it a centerpiece in his collection for a while. Which I argue led to the massive collection he has today. 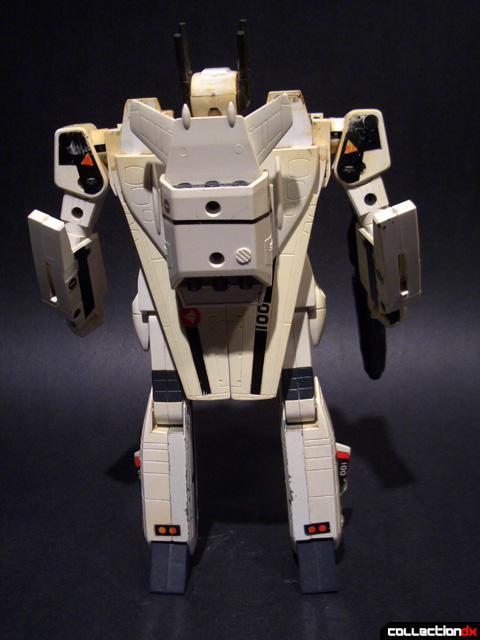 And thus was born CollectionDX, indirectly. Time marched on and Josh got more into following the Japanese toy scene which blew up to the near legendary status he has now. 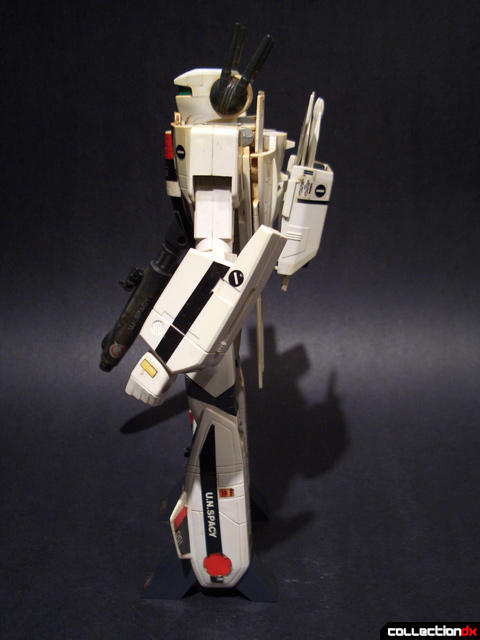 Upon a recent visit, I was pointing out the Hikaru Valkyrie to my significant other and Josh reached into the big glass cabinet and gave it back to me saying it was time it returned to me, making me promise to not Ebay it. 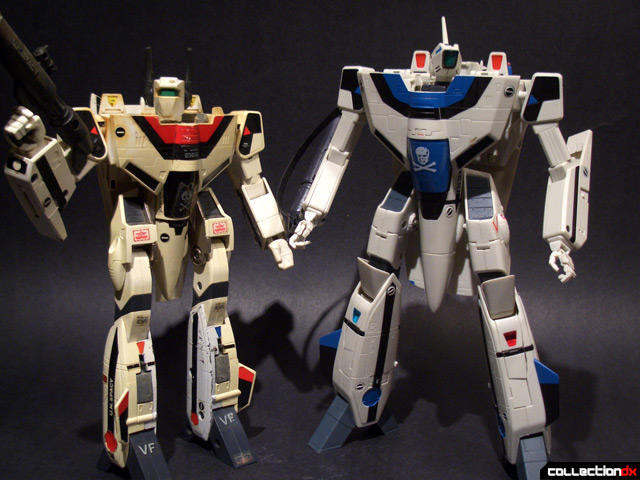 But how did all this change my life? Well thanks to Josh’s encouragement I am here writing for CollectionDX now which in turn led to my other online projects, which has all been incredibly rewarding creatively, all because I gave Josh my favorite toy. Hikaru now represents the creative spirit of my endeavors and stands proudly next to my other recent Macross score (thanks to Sanjeev) and will remain there till I pass it on in my will.

Have a toy with some real personal history? Please feel free to share it in the comments section.

13 comments posted
Thanks For this Great article

Been a big fan of your website. This is truly a touching story. Many Thanks for sharing. Truly, a Battle Damaged toy that has a meaning and a story to tell.

I remember getting this from you. I also vividly remember the pain of finding out that you had sold all your other valkyries and alpha fighters to the comic store for next to nothing. "WHy didn't you ask me?" I cried....

I got the consolation prize, your fire damaged valkyrie. It did sort of jump-start the collecting though, and I kept it all these years. I even cleaned it at one point...

But I am glad it found its way home - thanks for the loaner!

I had fire in my room around the age of 13 or so and lost a few things like my officers battle pod. My Matchbox SDF-1 was pretty badly mangled the towers were warped. It similarly plays the roll of "battle damaged."

I've got a roughed up Cyclone as well.
--
http://www.shadowsend.com

In a comment left elsewhere on CDX, a 1/55 VS-1S Super Valkyrie (in Roy's colors) was one of the early beginnings of my own collection, and remains one of my most treasured pieces. (I think that my DX Draias character from "Brave of the Sun Fighbird" (1991) is the only surviving piece to predate the Valkyrie, by a few years.)

One thing I'd like to ask, though, about the one seen here. You say that you got this in 1986? That's from before I got mine in 1990. But the head sculpt and paint apps are different on yours; also, the cockpit shield seems to be painted on, while mine has an accessory that fits over the transparent cockpit. Only other place I've seen those is in the recent reissues in the last few years. How is this possible?
------------------------------
CollectionDX Staff

bandai reissued it in the 90s with a new head sculpt.

JoshB said:
"bandai reissued it in the 90s with a new head sculpt."

HA! I didn't even notice that the heat shield was in place (instead of the canopy) in your fighter and GERWALK shots!

Ah-ha! The third link down exactly matches mine- the one with the box that is enclosed with the Valkyrie artwork reaching for you, but contains the Super Pack along with the basic yellow VF-1S. (I think I still have the box...!)
It says "Hi-Metal" on the box; does that have any significance?

-and a few decals-

Yeah, always good to hear that tale, Atom! And now, with pictures!

I don't think I have too many of such stories. I mean, I only have a small handful of toys actually from my childhood. Sure, they're precious to me, but not exactly news-worthy like this, y'knowmsayin?

Instead, I've been lucky enough to retain other collectors from my childhood! For me, the passion of collecting isn't so much about the toys, themselves--it's about sharing that passion with people. Just like Josh's involvement in Atom's story is a big part of what makes it so great, all my truly "great" toy moments have been ones where I've shared an otherwise fine toy experience with one or more of my buddies. In particular, Dennis "Doc" B. (who comments here every now and then) and I have had countless adventures since we met on the playground of our local elementary school back in '91. At first, we weren't into toys at all; as mature junior high school students, toys were *far* too childish for our refined tastes! Indeed, most of our time (and dollars) were spent towards the much more adult pursuit of comic books!

Still, it didn't take long for us to start sharing nostalgic stories of old cartoons we used to watch when we were little. We would pool our memories of silly old PSA commercials, cheesey shows of American properties like Centurions or Jayce and the Wheeled Warriors, and, of course dubbed anime like Tranzor Z, Starblazers, and Grandizer and the rest of the Force Five gang.

Just an aside: one of the biggest bones of contention between us was my assertion that there existed a cartoon about 3 dudes who piloted a cowboy-themed super robot! Doc refused to believe me...for years...until I finally found evidence of the show (thanks, interweb!): Saber Rider and the Star Sherrifs!

Anyway, the main focus of our collecting was still comics. We started going regularly to Primate Productions' comic conventions (then at the Boston Park Plaza Hotel...now, renamed the Radisson). There, we met many fan-subbed anime dealers (yeah, remember umpteenth-generation vhs???) and, of course, dealers in old US cartoons. We eventually found actual tapes of Force Five...and spent endless hours wearing them (and our VCRs) out! Good times!

Of course, I eventually lost interest in comics, and by the time I was in college, a whole new market of nostalgia-based collectors' toys was emerging in Japan. Thanks again to the internets and cash from working part-time, toys quickly started to become my thing...and the rest is history...

And even though nowadays Doc will tell ya that I have way too many toys, he still likes coming over and checking out my latest scores and engaging in some good toyetic conversation!

By the way, Atom, if I'd known you were gonna put that Yamato Max's -1A alongside your Bandai Strike -1S, I woulda lit it on fire before giving it to ya! ;)