What can ya say about Mark Nagata?

He's just a cool, affable cat who does his thing...and does it well!

After creating tons and tons of artwork for diverse businesses and organizations, Mark got deeper into one of his loves: Japanese toys. He started and co-published Super7 magazine along with Brian Flynn and Mark Miyake. [Here's our Super7 SDCC coverage.]

Four years later, Mark decided to move on to focus further on what he wanted to do: produce toys. Thus, Max Toy Company was born! Inspired by his son, Max, Mark now creates a line of exclusive editions of existing character toys and a line of completely original toys for a tokusatsu-style universe he's created around his "finding" a fictitious ultra-rare vintage figure of "Captain Maxx", a hero based on his son! 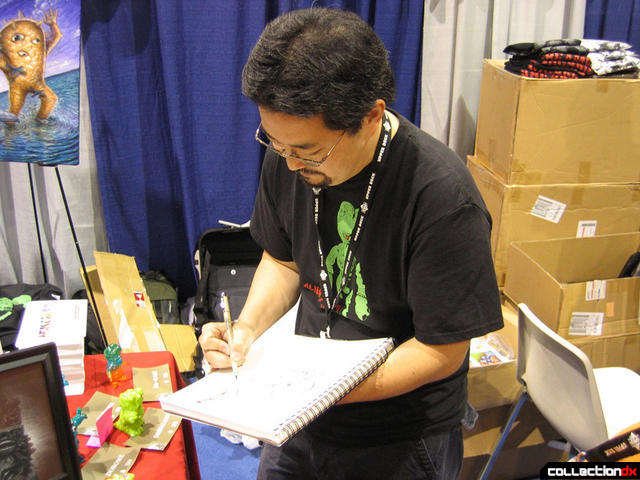 The artist in his element!

Mark's table was right next to Gargamel's and the two couldn't complement each other better! The display Mark and his wife had set up was more like a tiny museum exhibit than your typical SDCC table. Mark was busy drawing pictures for folks and Max was busy playing with the latest Bionicles!

I mean, just look at the artwork this guy has produced! Great stuff! And having such a supportive family was such a wonderful thing to see.

Of course, with my luck, they were sold out!

Hmmm...but what was up with that really cool Xam in the shot above? A wonderfully airbrushed one-of-a-kind Xam done up by Mark himself. I was sure it wasn't for sale...

One thing led to another...and I think my consolation prize for missing out on the first run of Eyezons more than made up for the loss! ;)

You can't tell from the stills, but the eye is actually "painted" with silver glitter! The effect is WILD!! This is one rocking Xam!! Definitely up there among my most prized glowies: a custom one-of-a-kind by Mark Nagata!

And I'm pleased to say that I wasn't the only winner! New vinyl convert, Mason, my co-defendant on the trip, scored another one-of-a-kind: an M1 Titanosaurus. And it kills!!

Now, be sure to check out Josh's article on Mark's toy collection. It includes a write-up of part of the second leg of our trip to San Francisco, where Mark was nice enough to host us for a day! Check it out!!