The GX-04 UFO Robo Grendizer (超合金魂 GX-04 UFOロボグレンダイザー) is a pretty important release in the line of popular diecast toys by Bandai. It's seems to be a toy that brought alot of collectors to the line, the hobby and to other collectors. And it's no surprise with the character being as popular as it is. For myself, it was the first Japanese collector toy I would buy as an adult. It was March of 2001 and I was in Tokyo visiting a friend. At the time, I was more into movies and I spent most of my free time there looking for a copy of Kenichi Iwamoto's film "Kikuchi" (still haven't found it!). But a friend of mine was into toys and he asked me to keep an eye out for a few things. I didn't have any idea where the vintage toy stores were at this time and the only toy store my friend knew about was Kiddyland in Harajuku. When we got there, I wandered the isles until I saw some boxes of diecast super robots. I saw Mazinger Z and Great Mazinger and while they looked vaguely familiar, I wasn't sure I'd seen them before. But the box for the Grendizer jumped right out at me and I couldn't believe what I was looking at. (I was actually more surprised to find this inside the store than I was to find Marilyn Manson just outside as he departed. I didn't see what he was buying there, but he being evil, I'm guessing it was Kubricks, which are clearly the work of the devil!) 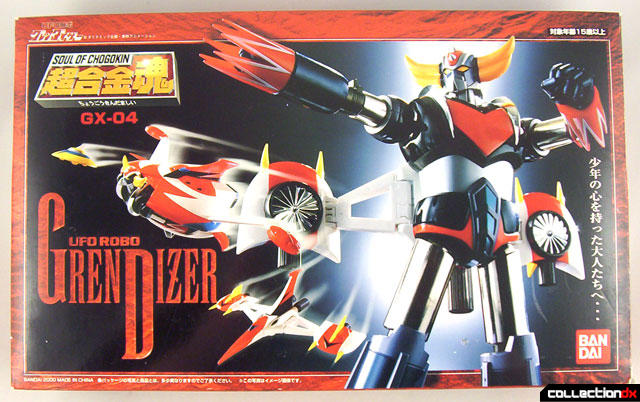 After so many years, I held in my hands something I'd always wanted as a child. A diecast, realistic looking Grendizer with a ton of features and accessories. I didn't even look at the price tag and just brought it to the counter. There was no way I wasn't coming home with this thing.

Taking it out of the box was a surreal experience. I was a child all over again (albeit, a child who could afford a $130 toy!). The box measures 14.25" long by 8.75" tall and 4" deep and the toy and accessories rest in a styrofoam tray. First thing was to get some fists on this guy. There are two forearms that connect to the upper arms via magnets. The first is the standard pose set with removable fists and flares. 3 different sets of fists can be placed on this forearm. You have a regular closed fist, partially open fist for holding the double hariken accessory and a fully open set for flying or when using your imagination to fire the "hand beam" weapon. 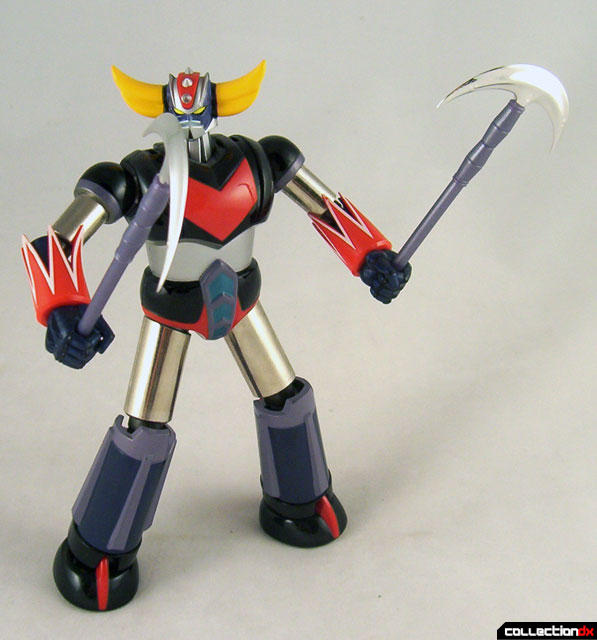 The other set of forearms are a really cool addition. These also have magnetic connectors, but instead of interchangeable fists, they have the flares outstretched in "screw crusher punch" mode. Looks cool, right? Well, they do more than LOOK cool, they also launch at the press of a button! I love the Soul Of Chogokin line of toys, but the launching fist/missile gimmick is one that they have sadly gotten away from recently. 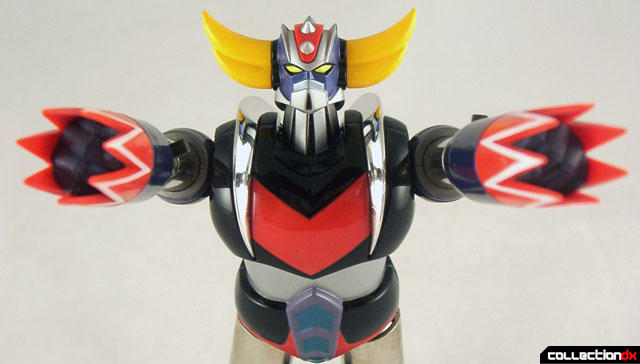 Previously, I mentioned the double hariken feature. Well, this was the sickle weapon that Grendizer usually employed to finish of his foes in the cartoon. The blades would launch out of his shoulders and he could combine them to form one double sided weapon. Two connecting shafts are included as well two cosmetic blades for in display in the shoulder. When you want him to hold the weapon in his hands, you can remove them from the shoulders for a more accurate look. 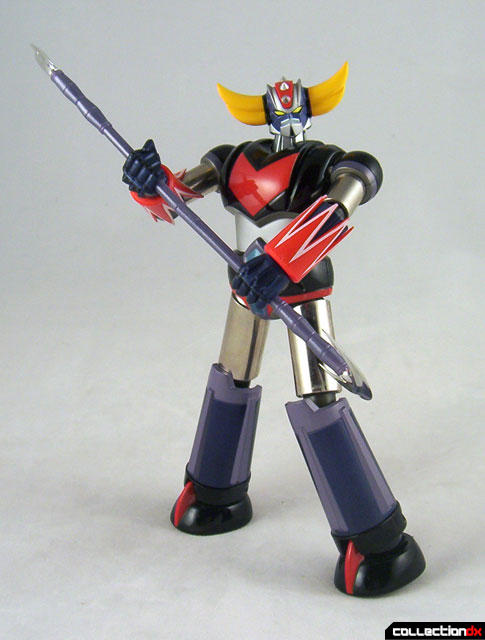 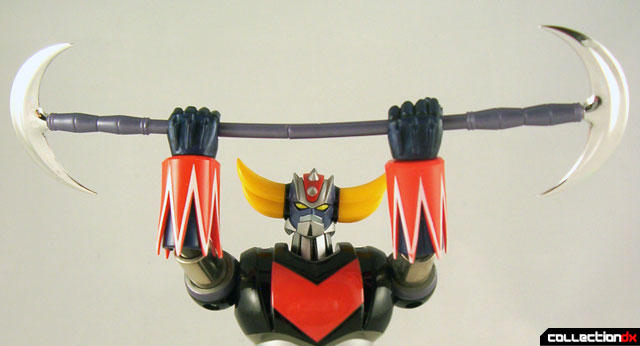 Grendizer is a really great looking robot. The feet, thighs, torso and upper arms are all diecast. The ankles, knees, hips, neck, shoulders, elbows and wrists are all articulated, but some much better than others. The lower half of the toy has movement, but isn't very poseable at all. The arms and head is where you'll get most of your dynamic poses, but herein also lies what is probably the biggest complaint about this toy. The flares on the arms are too long and bend when you bend the elbows. It's a very frustrating thing because otherwise the toy looks amazing. 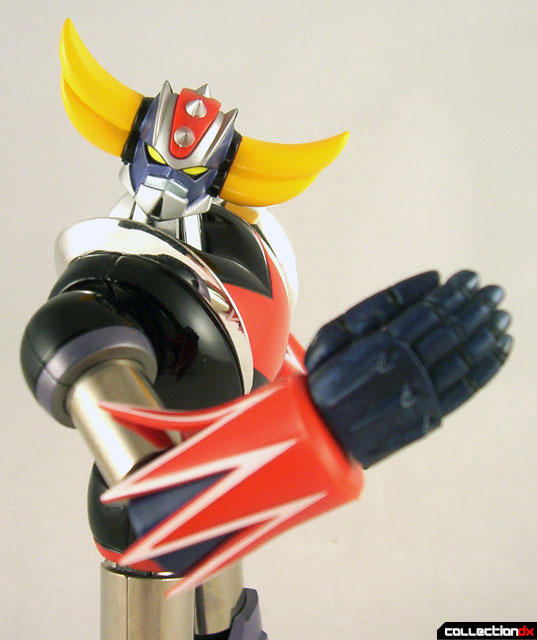 The GX-04 comes with Grendizer's Spazer, the flying saucer he would dock with for flying purposes. The wings, cockpit and other details must be attached out of the box. The entire saucer is made of plastic and opens up to hold Grendizer. To fit Grendizer inside, you must first contract the legs by pushing them up towards the torso. This is a great feature but can be a bit of a pain. I find it somewhat difficult to get Grendizer to rest in there just how I like. You kind of have to fidget with the feet from the back and get the arms to be just right. I'm a nut for symmetry so if one of his arms isn't posed exactly like the other, I have to fight with it to make it right. I also wish there was a better way to blend the arms into the side of the Spazer, but I have no idea what would work better. 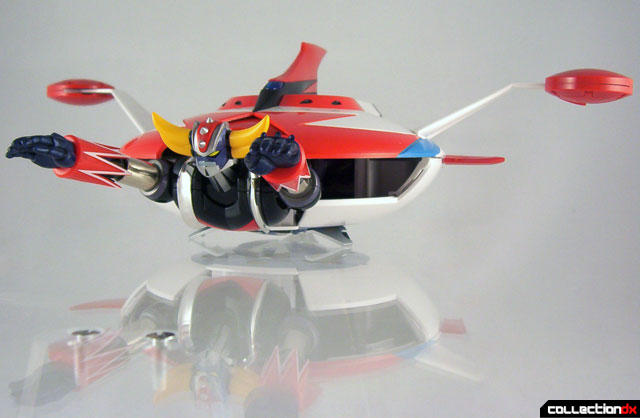 In addition to actually housing Grendizer, the Spazer does include a "spin saucer" on each wing. Each one has 6 triangular flaps that can be lifted to form the damage inducing blades, and furthermore, when they are open like this you can add a "spin drill" accessory that plugs into a hole in the center. 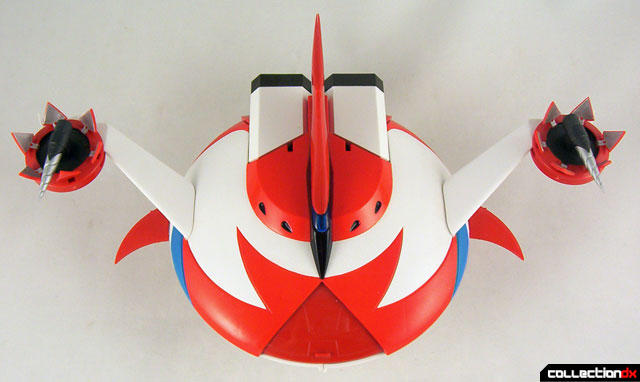 Wow, a diecast Grendizer with his own Spazer. You can't beat that can you?! Sure, you can! By throwing in a diecast "Double Spazer" that can connect to Grendizer's back! This cool little ship that was flown by Mazinger Z's old pilot "Koji Kabuto" is a great addition to this set. The main body is diecast and the rest is plastic. The wings and nose can be adjusted and the bottom of it can be openedto expose a tab that is inserted into the back of Grendizer and lift him into the air. 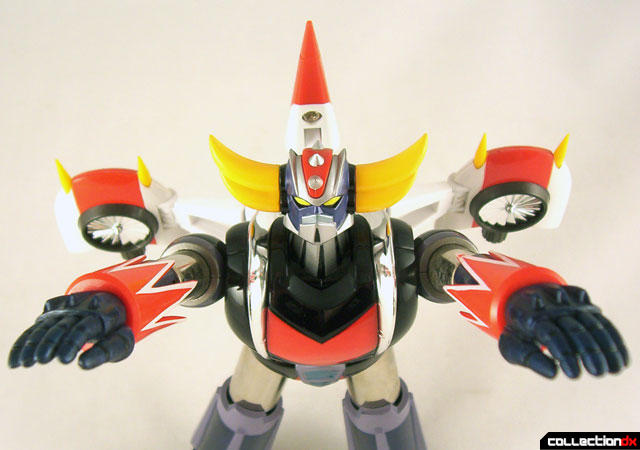 Previous to his flying the Double Spazer, Koji flew around in the utterly useless "TFO" saucer and a small plastic replica of this is also included in this set. With some many different parts included, naturally you need a place to store them all and there is a very simply, but effective display stand included for this purpose. Everything it comes with fits nice in or on it. 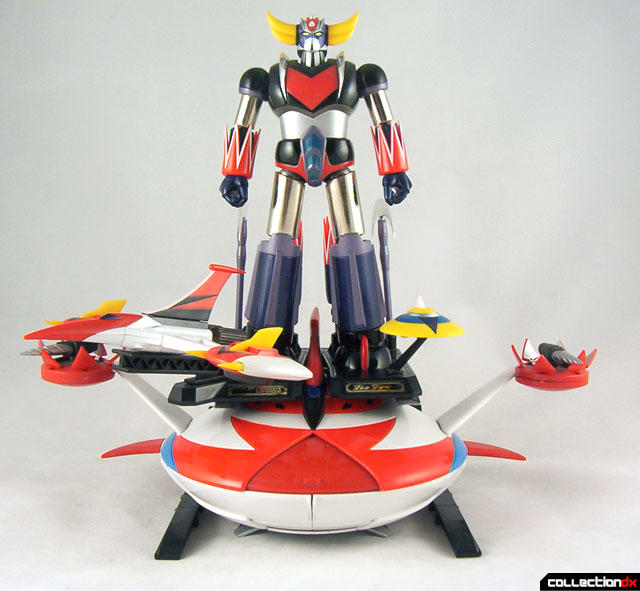 The GX-04 UFO Robo Grendizer is a fantastic toy and one that I'll always love. But I wouldn't be averse to Bandai doing a "revised" version, either. One that doesn't have those pesky bending flares or one that looks like one solid piece when it's docked with the Spazer (hey, toy technology has come a long way, so I can dream, can't I?). Maybe a tiny little figure of Grendizer's pilot, Duke Fleed, would have been nice. Bandai did re-release this in a set with two extra spazers, but the toy was not modified in any way. Perhaps some of the improvements made in chogokin toys in subsequent releases could be put to use to make an improved version of this toy. But as it stands, if you like Japanese robots, you should own this.

Those who know me well know of my nigh-irrational hatred of SoCs...especially the ones of characters for whom there is already a perfectly fine vintage counterpart. The GX-04 CLEARLY falls into this category for me.

True enough, this is the toy that got me "officially" into toy collecting as well. And at first, I did love it. But then again, at first, things like "anime-accuracy" were paramount to me. I found most vintage toys quaint and silly in their proportions.

Since then, I've learned quite a bit more about collecting and my tastes have evolved(!). "Collector" toys for adults are now vastly less interesting to me than most real toys for children (which, it so happens, are mostly the vintage kind).

As for the GX-04, well, it's certainly got its flaws...but many vintage-lovers I know still swear by it. Not to be a *total* hater, myself, I happen to love the Spazer design for the most part. It seems very light, but the Grendizer figure fits very easily and perfectly in mine (symmetrical and everything), which makes me think Nekrodave's was maybe a lemon. The hinged piece that locks him in at the waist is a bit odd (certainly not in the cartoon), but it gets the job done. Similarly, I like the telescoping legs--smart idea to get the design to work. Lastly, the diecast content isn't bad.

Still, I may just sell mine. I know, I know: sacrilege coming from a Grendy-nut. The thing is that he just SITS there on the shelf and I *never* have any desire to pick him up and fiddle with him. Sure, with a big collection, I don't get much facetime with many of my toys, but I at least pick up and fly most of them around from time to time. I *never* feel like doing that with the GX-04. The GA-37, on the other hand, is the COMPLETE opposite. I can't take my hands off the thing! ;) There's a reason for that: it's a simple, fun, lovable toy.

Anyway, clearly, your mileage may vary. If they happen to release an "R" version of the GX-04, I may give it a whirl. Afterall, I like the GX-01R significantly more than the GX-01. The face sculpt was decent enough (looked cool anyway) on the -01, but with the -01R, it looked DEAD-ON to the cartoon. The other features were pretty much the same, but the added size and improved sculpt made me spring for the -01R.

If they happen to go for a GX-04R, I could sure go for an improved face sculpt. Again, the -04 isn't bad...it just doesn't look much like he does in the cartoon. More importantly, however, I'd want SEVERAL modifications/improvements...

On the Spazer, the Spin Drills and Spin Saucers are pretty pitiful for such signature weapons. The opening flaps don't flatten out to form a proper-looking buzzsaw, so the Spin Saucers are pretty much out. The Spin Drills are passable, but they don't even shoot. That's weak. The rage-inducing curly Screw Crusher blades, Dave has mentioned...along with the poor articulation below the belt. I hate the rubbery Double Hariken staff--I mean, it even looks bendy in the pic above. The curvy Shoulder Boomerangs that fit onto the body are just dumb; they should have just made do with flat, proper-looking Boomerangs that fit on the body, could be removed, and ultimately attached to a decent Double Hariken staff. The neck joint needs to be stiffer--a slight breeze throws his head off at a weird angle, making him look like a puzzled canine. And for the love of Duke, Bandai, could ya maybe engineer arms that didn't have to be swapped just to make the fists shoot? Pretty please??? I mean, there's already an absurd amount of accessories and kibble with this toy...I feel like I need an accountant present when I play with it...swappable elbows DON'T help...