With the new Transformers movie coming out July 4th, 2007, the big PR push is on. Hasbro recently sent a bunch of sites the new Leader Class Optimus Prime so that they could get a hands-on review of it.

Now I know that the new transformers designs are a big issue in the transformers community. I know people would rather have G1 designs than these new things. But all the fanboy outrage is not going to change what we now have.

You know the old saying: When life hands you lemons, make lemonade?

I have to say, Hasbro did a great job with this toy. Yes, it really doesn’t resemble the look of the movie Optimus Prime. The Hasbro designers had a tough job ahead of them when they were tasked with making toys of the new movies designs. What they did manage to do was make a cool looking toy that is sturdy and fun to transform.

Personally, I am not a big transformers collector. I pick up the designs that interest me here and there, but I don’t make it a point to get each and every release. The Transformers that tend to appeal to me are the ones that are least like transformers that have come before. This new Optimus Prime fits that description perfectly. 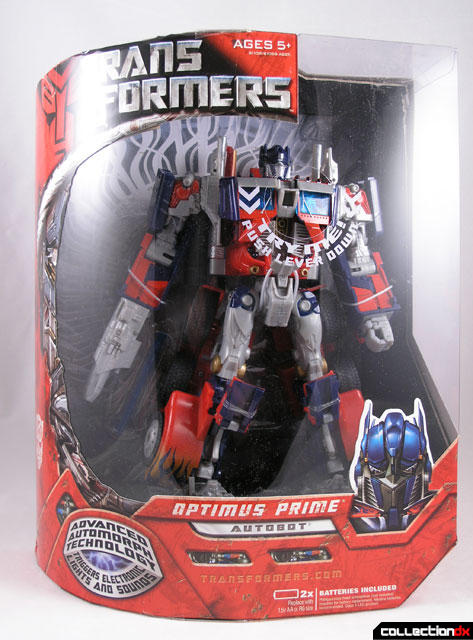 Optimus prime comes packaged in robot mode in a nice window box. There is a small hole in the front so that you can try out the automorphing gimmick before buying it. Taking it out of the package is tricky if you are concerned about keeping the package mint. If not, than just tear away. There are lots of twist ties and little rubber bands securing it in place, so you may need a set of cutters to release it. When you finally release Optimus from his plastic coffin, he is just about almost ready to play with. The only things you need to do are insert the blue missile into the gun, and to put the feet in their proper position. 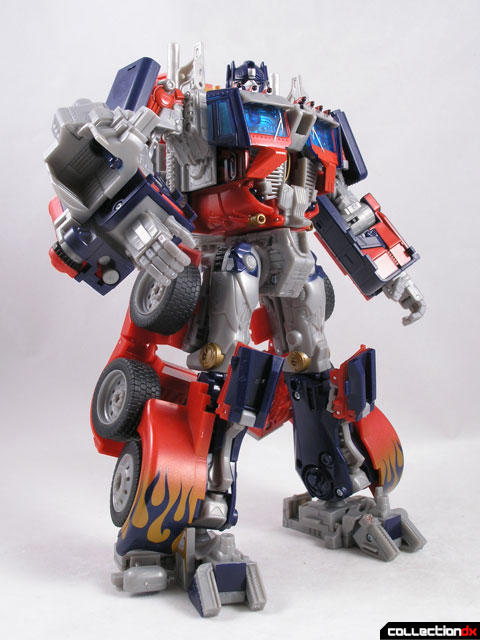 One of the greatest things about this new Prime is how articulated it is. It really is one of the most articulated Prime’s that I have ever owned.  The only thing this is lacking is some sort of waist joint. 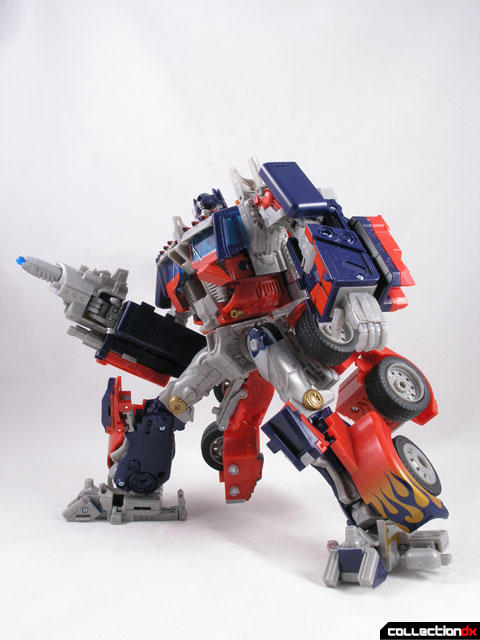 In robot mode you have the automorphing gimmick. This feature is used when completing the final steps of transforming from truck to robot mode. If you press a button on the chest, the head pops up and lights and sound activate. Its pretty cool. Another cool gimmick this toy has is the right arm cannon. Sliding a lever inside the forearm makes a large laser cannon swing out and cover the right hand. Pushing a button on the gun makes the missile fire. Only one missile is included, so don’t lose it. 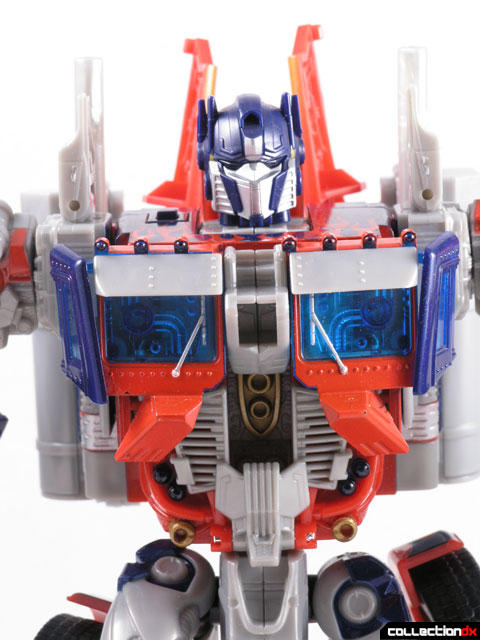 Transformation from robot to vehicle mode is tricky the first few times. The package says this is designed for kids age 5 and up, but I challenge you to find any 5 year old who can figure this out. There is a 4 level transformation scale on the back; 1 being the easiest and 4 being the hardest. This toy is labeled as a 4. What makes the transformation tricky is that there are a lot of parts that don’t quite fit together until other parts are in place. This makes you unsure of placement until you get to the final assembly. Also, some parts are designed to pop off instead of break, so you may pop off a shoulder pad or two during the process. 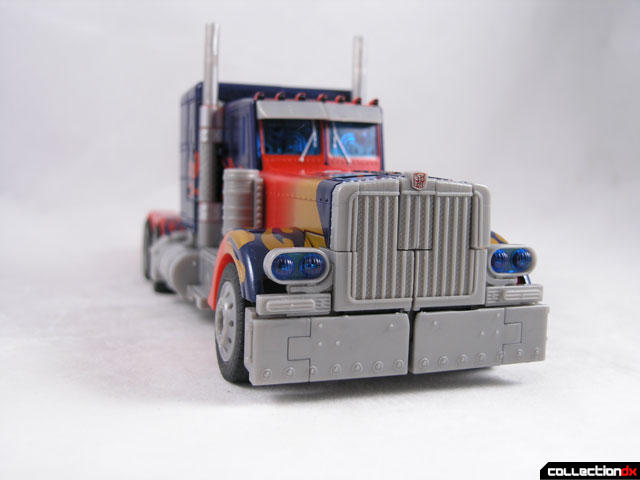 Once transformed, Optimus Prime makes a great looking semi truck. The wheels are all rubber, and the truck rolls along smoothly. When you do finally get it all together, it is very solid. The light and sound gimmick is here as well in truck mode. Pressing a button on the top of the cab activates lights in the windows and a sound. 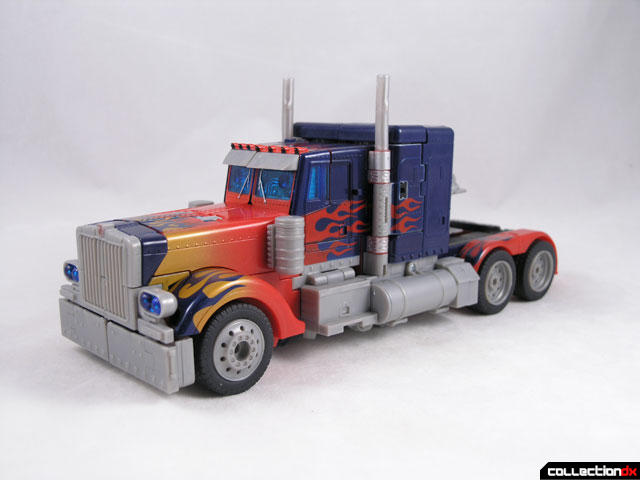 One other thing I wanted to mention was the smoke stacks. Remember the big stink with the 20th anniversary Prime? The smoke stacks were cropped to comply with US safety laws. Well the smoke stacks are here intact in this toy, this time made out of rubber instead of plastic. 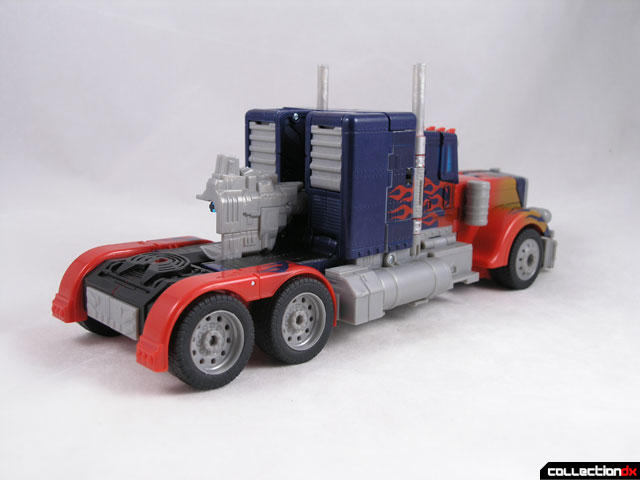 I recommend people check this out and give it a chance. I was very surprised by this one. To be honest, I was expecting to not like this toy based on what I saw at toy fair, but now that I have handled it, I think it is a winner. 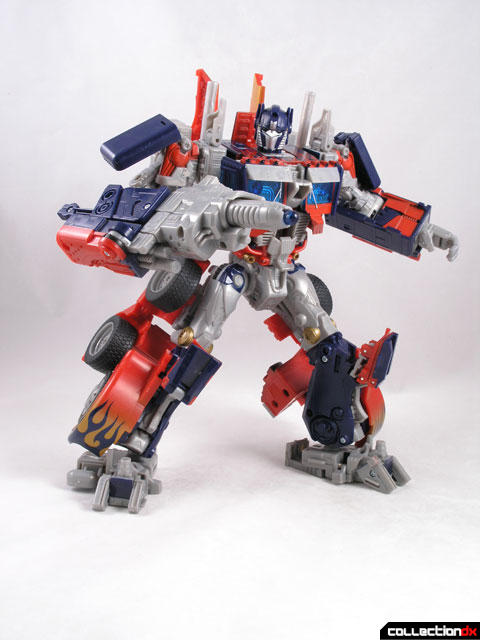 Still, this one somehow reminds me of how a Yamato transforming Valk toy should be! It seems very involved and very clever...but also rugged and solid--something the Yamato Valks lack (I'm thinking specifically the 1/48 here). Well, whether I get this or not, I'm glad it exists. Good job, Hasbro (or is that Takara??? ;) ).

Not bad at all. I'm not a big Transformers fan/collector, but if I were, I think I would be enthused about that one.

Does he have winshield wipers on his chest though?!?

This is probably my favorite of the movie designs. I think all the iconic details of Prime are there, but there is still a fresh "Transformers Movie" look to it. Heh, even the gawdy flames have grown on me a little.

Nice job on the cool toy Hasbro, and nice job Josh on the great review.

I don't have OP here, but I've seen him in his box a handful of times. Complex, yes, but I'm not sure if I want to get him or not. Yes, it is "Prime", but the contrast between this toy an his film counterpart makes me wonder if it's worth it or not.

Why do his eyes glow yellow when they're really blue? What happened to his 'Energon' sword that so dramatically decapitated Bonecrusher? (That was one of the best movie weapons/moments!) That cannon is supposed be a huge honkin' rifle almost as long as his legs, and is built inside his left arm.

But the thing that really kills it for me, though, is those highly awkward wheels and how they stick out of him like that. Yes, I am well aware that this may be a limit for the designers because of how complex the CGI character model is. The CGI version has them exposed from inside his thighs and ankles, not outside them like the toy's. I just don't know if I can do it or not, I'm sorry...

The flames never bothered me one bit. In fact, I liked the idea. I know this may sound something like heresy to the fanatics out there who posted friggin' death threats to Michael Bay over this one decision, but the idea of a vehicle mode is to disguise the Cybertronians and allow them to move around in plain sight. With a raise of hands: how many of you here have seen flames on a private vehicle, or even a semi-truck? How common are they? Yeah- that's the idea; it makes OP here look no different than any other car or truck out there. Starscream was not dressed in white, red, and blue, and I heard no complaints. Ironhide was not red, and I heard no complaints. Ratchet was not dressed in white and red, but he was dressed in the same colors used by many real emergency vehicles. Did I hear complaints about that? No! People seem to have forgotten that these are supposed to be real vehicles that you don't take notice of, despite the brand-names used (which I won't get into here).

One of the big reasons I really liked the US-exclusive Autobot Downshift from the "Transformers: Cybertron" (2006) line so much was because his choice of disguise and his colors were not eye-catching in vehicle mode specifically. He looked like a muscle car from the 70s that has been around a while! That's an excellent disguise! Same with Bumblebee's '79 Camero choice in the movie, despite Mikaela's odd comment while sitting in Sam's lap. (Funny thing is, they both knew it was a pass at her, and she still did it. Very odd...)

I am a huge Transformers fan all though I do not buy anything just for the sake of it because its Transformers. I understand what Sanjeev means exactly about the Yamato Valkyries. It is what it is, we would all have loved it to be more like G1, but its not, it is a great solid toy. IMO this is probably the best movie toy, thats why I bought it. If people do not like it they should not buy it.