The GaoRanger are dead!

Gao Red and Gao Silver watch in horror as a powered-up Highness Duke Orgu Ura quickly defeats and kills first Gao Blue, then Gao Yellow & Gao Black, and finally Gao White. Preparing to sacrifice themselves as well to defeat the Highness Duke Orgu, the six humans are transported away by the God of the Power Animals to the safety of the Animalium. There, the giant black and gold God of the Power Animals- Gao God- tells Red and Silver that they must not give up even with their friends dead, and then he takes the four bodies and disappears once more with them. When Ura begins to terrorize the city below, Red and Silver overlook their grief by summoning weakened courage, and intercept him.

At the same time, the four dead GaoRanger awaken in a strange, empty place and are told by a mysterious boy-like figure that there is still hope for a new weapon. If they can solve a puzzle, they might be released. After walking a while they come to a cliff overlooking an ocean of magma, and four pieces of carved stone sit motionlessly beyond the edge for them to get. Knowing what must be done, and remembering their friends who are still fighting, the four GaoRanger jump together, each grabs a stone, and they solve the puzzle just before they hit the magma.

Meanwhile, Gao Red and Gao Silver are getting beaten badly as Ura plays with them and taunts them over the death of the others. But when Ura makes to kill Gao Red the same way he did the others, a bright red light throws the Highness Duke Orgu back. A new weapon appears in Gao Red’s hands- a stylized archer’s bow called the Falcon Summoner. Hearing the voices of his dead friends, Gao Red places his Jūōken into the new weapon and fires it at Ura, but this only causes the Highness Duke Orgu to grow. Then a red Gao Jewel appears and he places it into the Jūōken, and then fires the Falcon Summoner into the air. The peaceful snow-capped mountain at the heart of the flying Animalium suddenly becomes a volcano and erupts... and an enormous red bird flies out of it and down towards the giant Highness Duke Orgu- the awesome Gao Falcon! 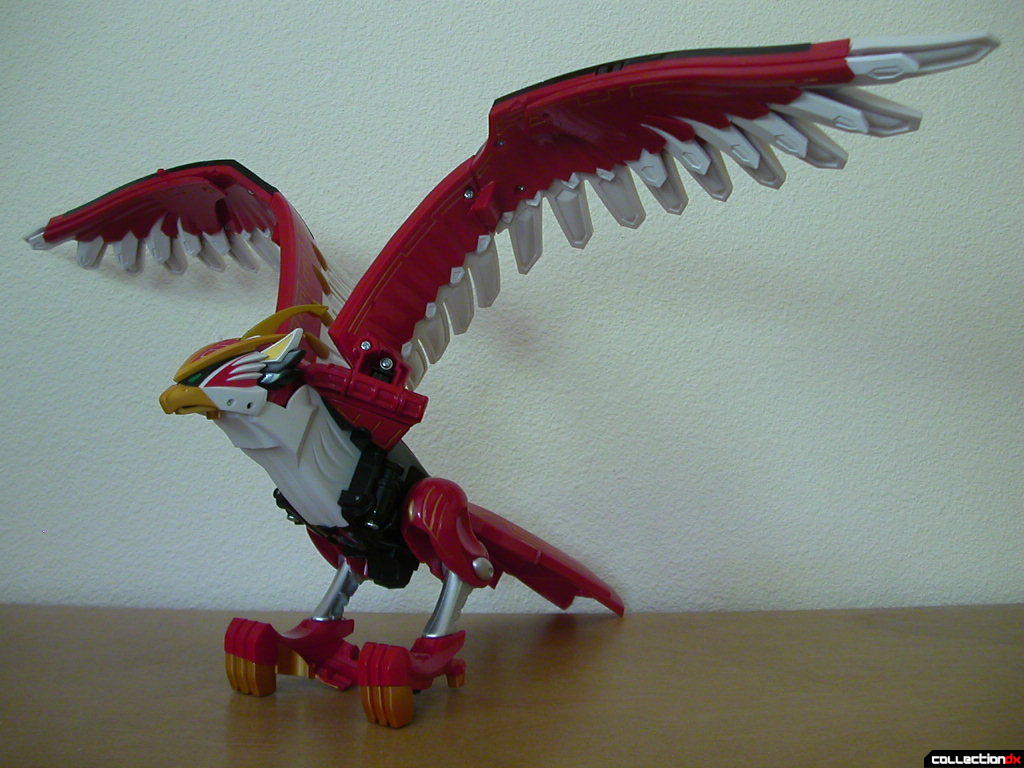 Gao Falcon (back) is an additional Power Animal controlled by Gao Red. The most striking thing about this DX Power Animal is his size! His huge wings- 21” from wingtip to-wingtip- were lovingly designed and highly detailed. Each one has 13 white PVC feathers running along the backside of them, and an additional structure beneath which layers the larger primary feathers with an additional six. (The wingspan is so large that they come separately in the- might I add- huge box; this is the only assembly that is required. This I will take advantage of later in the review.) Gold-painted lines provide a highlight and an additional layer of detail across both the top and bottom of the wings. They are permanently curved upwards as if Gao Falcon is about to swoop down on an Orgu, which disguises their individual 11½” width! However, because of their size and weight, the wings are fixed in one position and only swing down when transforming (more on that later). Next on the list is his tail which is seven inches long, and makes up the majority of Gao Falcon’s length (12½”). Most of the gold highlights are painted on, and it can snap up and down 90° at its base. Between the wings on his back , there is equally-high detail with gold paint highlights. (Here, the wings are snapped out of position to see it better.) His legs are red, gold, and silver, and snap at the hips, knees, and swing side-to-side at the ankles! His claws are not really pointed, but they are powerful-looking talons nonetheless. Finally, his head is perhaps the best-sculpted section of the entire toy. Though his painted green eyes are relatively small, the head is adorned with different feathers at different angles, but he has an unusual single gold feather on the top of his head, much like a quail’s. His beak can open and close a bit, and with some tricky maneuvering, his head can be repositioned to either point forwards or downwards. The legs and head provide flexibility needed in lieu of the lack of movement in the wings when in its animal form.

For those of you wondering what the differences are between PA-7 Gao Falcon from “Hyakujuu Sentai GaoRanger”, and its English-speaking counterpart, the Falcon Wild Zord from “Power Rangers Wild Force”, this one actually took a bit of an unexpected twist:

Ever since Bandai America began re-releasing Super Sentai toys in the US for the run of “Power Rangers”, even into 2007 [when I’m writing this] I have never, ever heard of them modifying a toy for the better! Typically, BA will change decal designs, change paint apps, change part colors, or remove electronic features such as movement and light & sound. But adding a feature!? Ya got me on that one! Since I never got the Deluxe Isis Megazord, I wasn’t even aware of this until CollectionDX creator/webmaster JoshB pointed it out to me while I was researching for this review! And so with the exception of the advanced tail design (!), all moldings & colors (there was no die-cast metal in Gao Falcon) were left intact. The Falcon Zord was not released individually, but as one of five components in the Deluxe Isis Megazord set. Gao Falcon, also, was released as part of a special release DX Hyakujuu Gattai Gao Icarus set, but could alternately be obtained individually (as it is here), which it wasn’t for the “PR” release. For that matter, the Deluxe Isis Megazord never made it to American shores. It was, however, released in the UK.

I tell ya- this may be my favorite individual Power Animal of them all! The level of detail put into this thing is awesome and successfully crowns the entire 2001 line of Power Animals. My only gripe is the un-synchronized hip joints and that’s it. Its size is also very impressive, even compared against the DX Hyakujuu Gattai Gao Hunter Evil [or Justice] and DX Hyakujuu Gattai Gao King! What could they have done differently? I don’t see how they could improve it! Now, because the Falcon Wild Zord could only be obtained with the Deer, Giraffe, and Rhino & Armadillo Wild Zords in the Deluxe Isis Megazord set, you would have had to obtain it for cheaper, but the other four Wild Zords were heavily modified from their original Japanese counterparts, so there’s a trade-off there. All I can say is that the Gao Falcon rules! 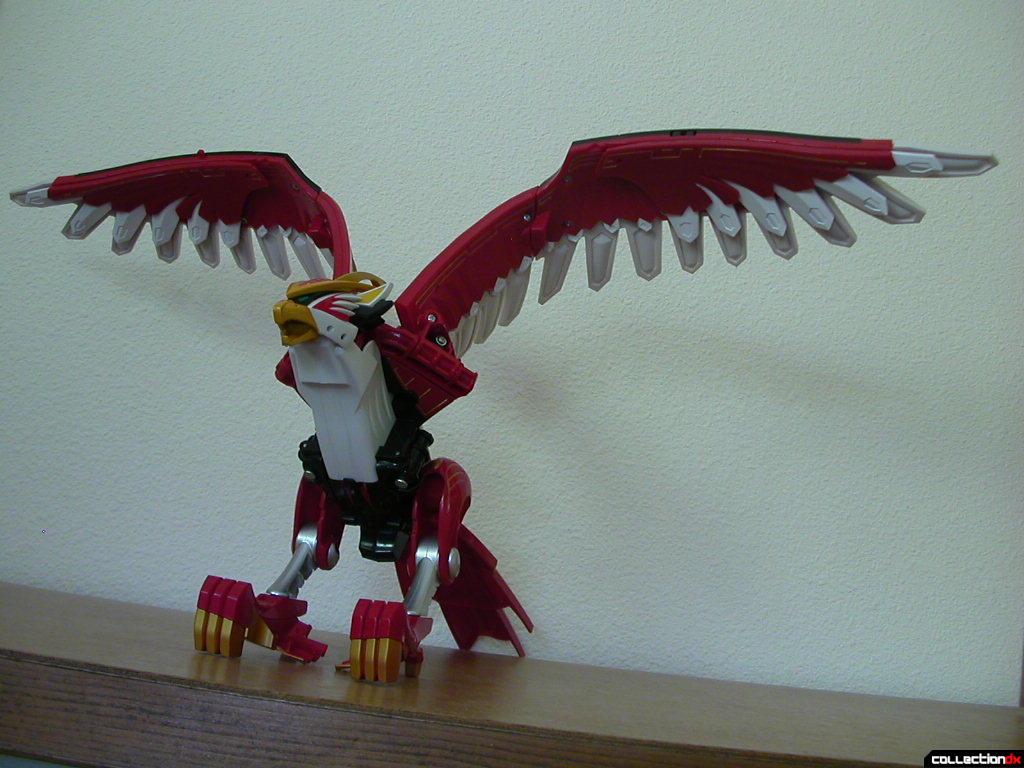 As Gao Red watches on, Gao Falcon swoops down upon the city, and it fiercely attacks the grown Highness Duke Orgu Ura with its sharp claws & beak. Soaring clear, Gao Falcon also summons Gao Giraffe, Gao Rhino, Gao Armadillo, and Gao Dias to fight! Amazed that the Power Animals are able to operate even without their shattered Gao Jewels, light surrounds Gao Red and the four dead GaoRanger return to life around him! Sinking to the ground in relief, each reassures him in turn, and then they all henshin. Taking reformed Gao Jewels into their Jūōken, they put their daggers together and call out-

PA-7 Gao Falcon is the last and pivotal component required to move on to the last regularly-seen humanoid combination mecha from “Hyakujuu Sentai GaoRanger”. Go on to the next page to review the Hyakujuu Gattai Gao Icarus! 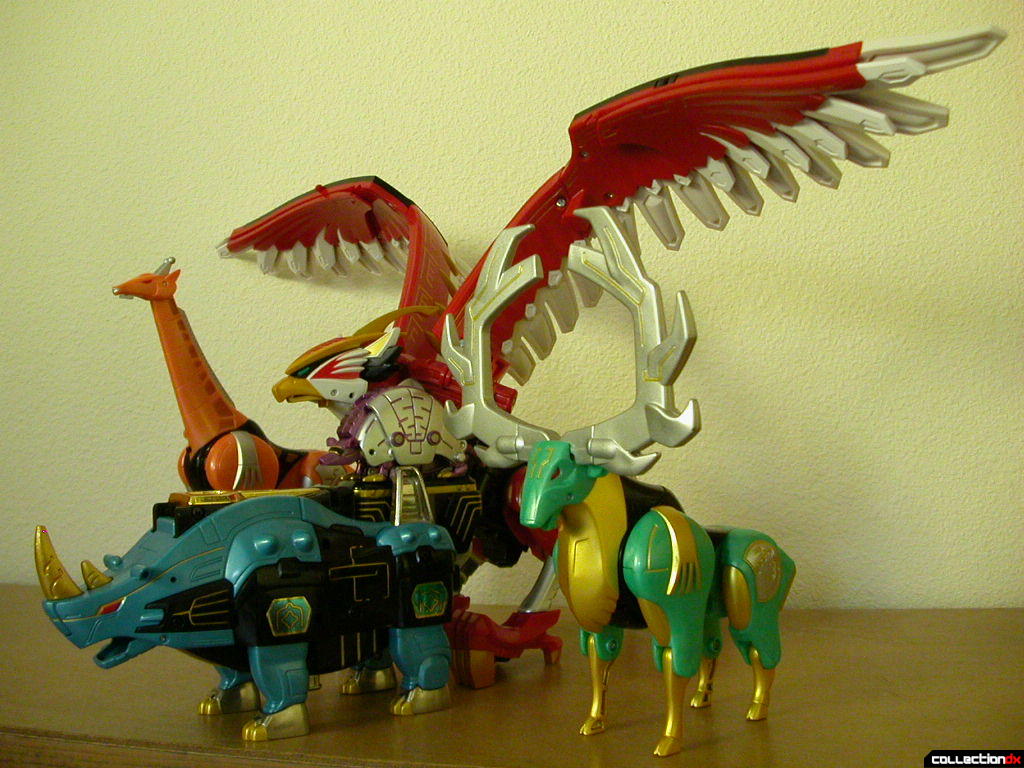 [Author’s note: special thanks to CollectionDX webmaster Joshua Bernard for sharing images of his own Falcon Zord with me so I could compare them. Josh, I thank you once more!] 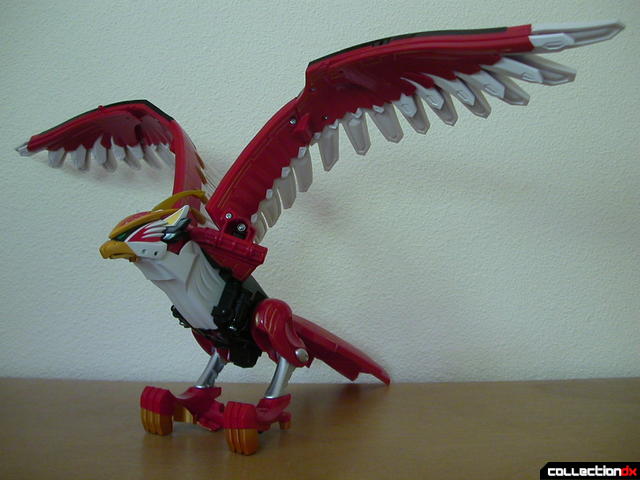 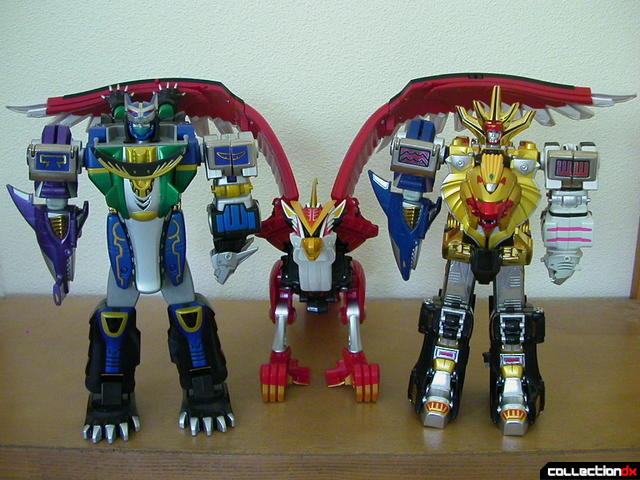 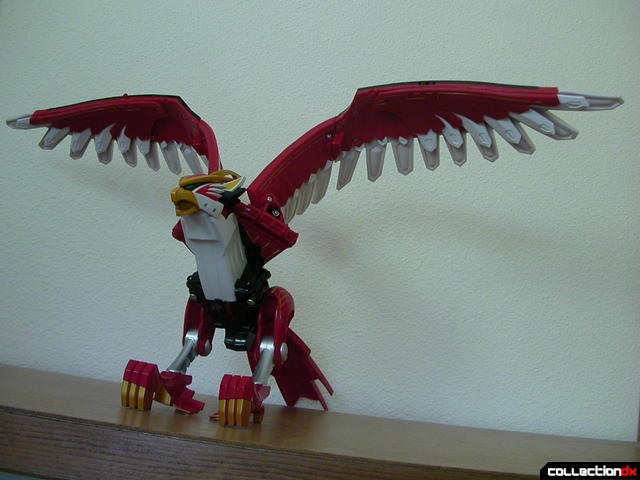 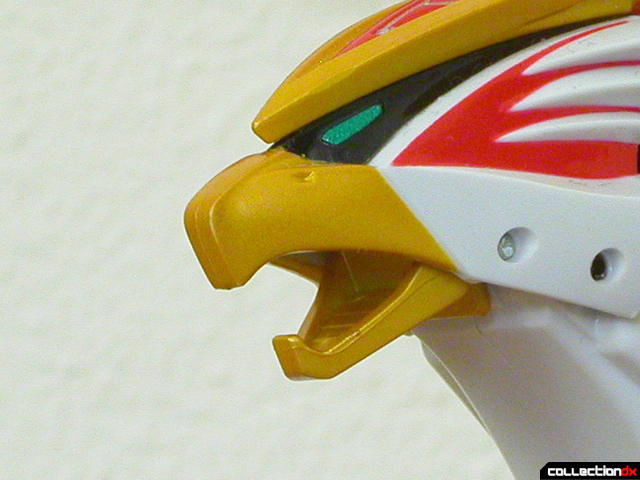 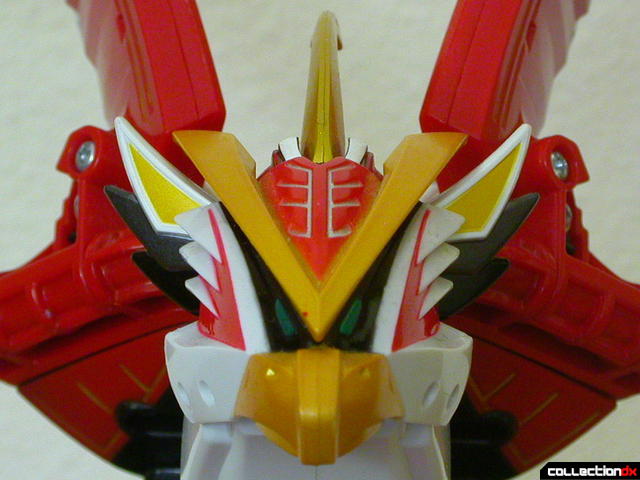 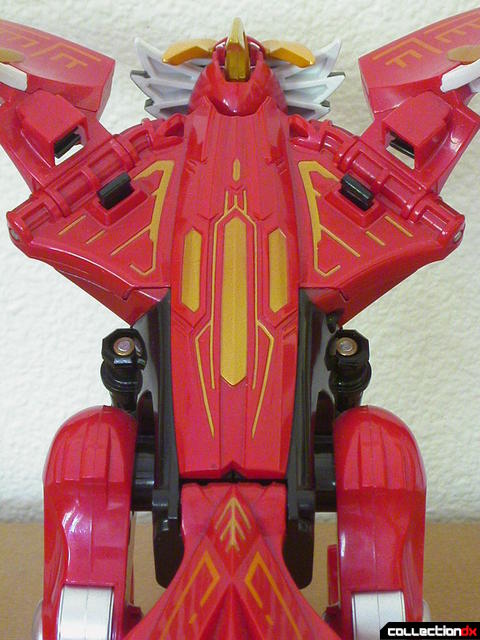 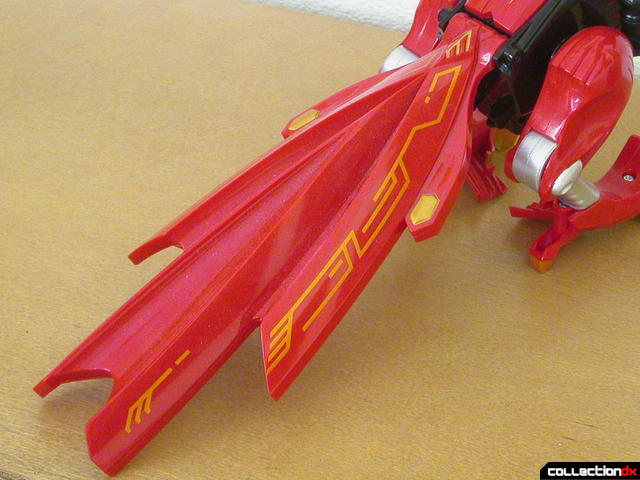 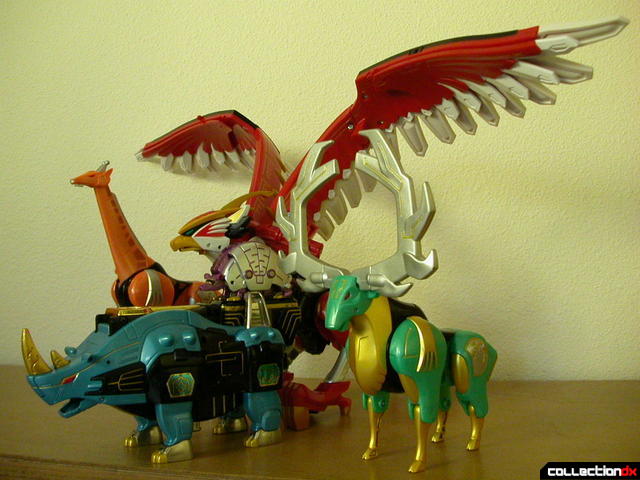 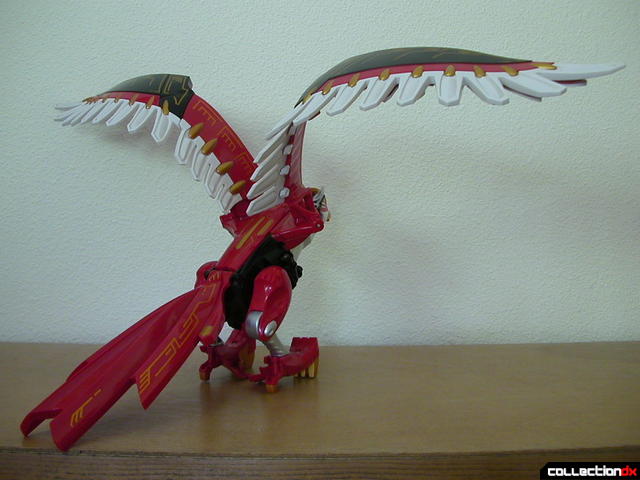 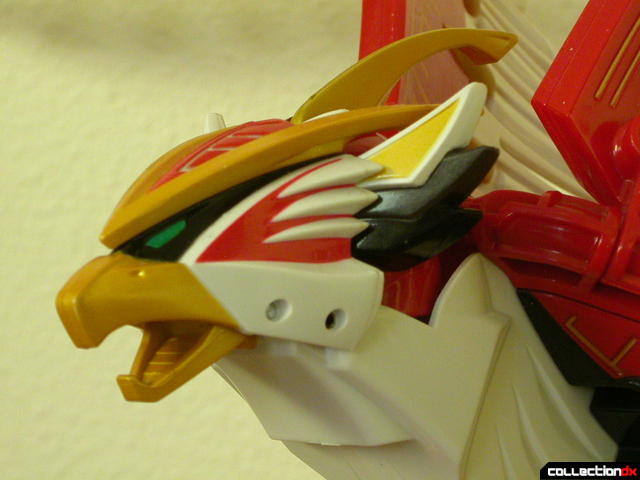 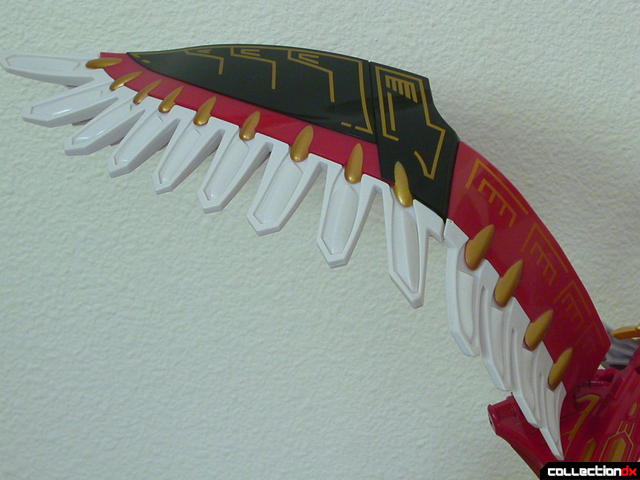 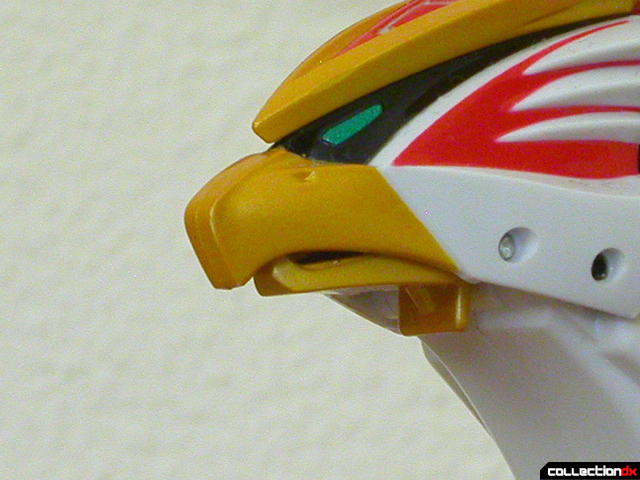 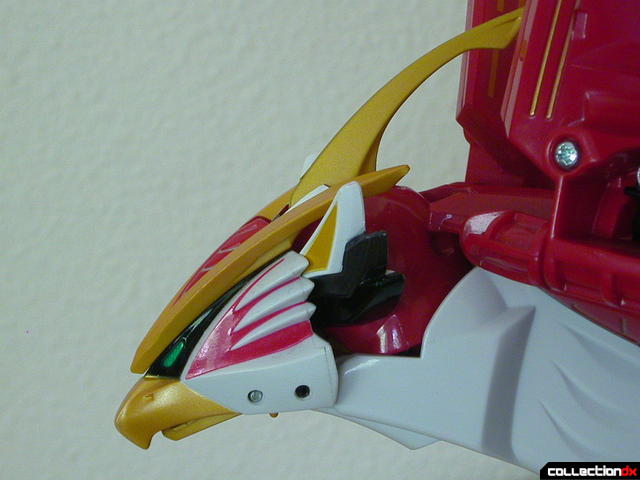 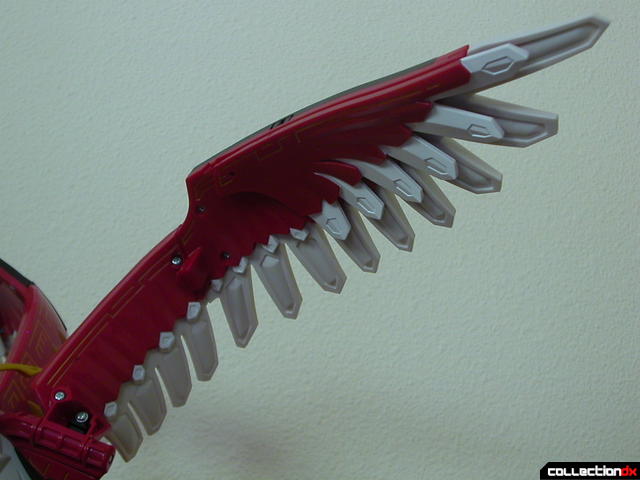 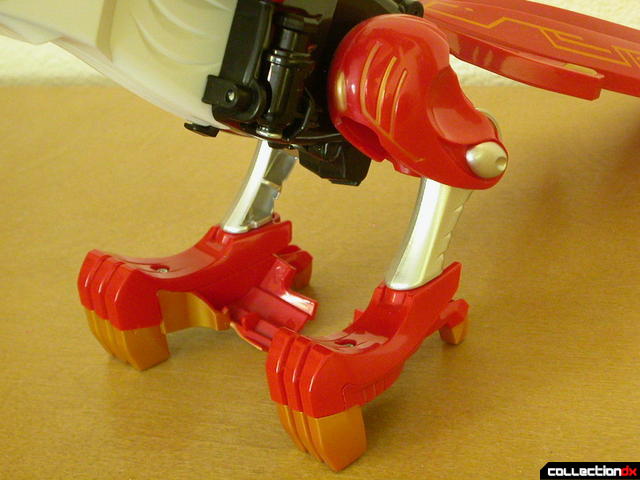 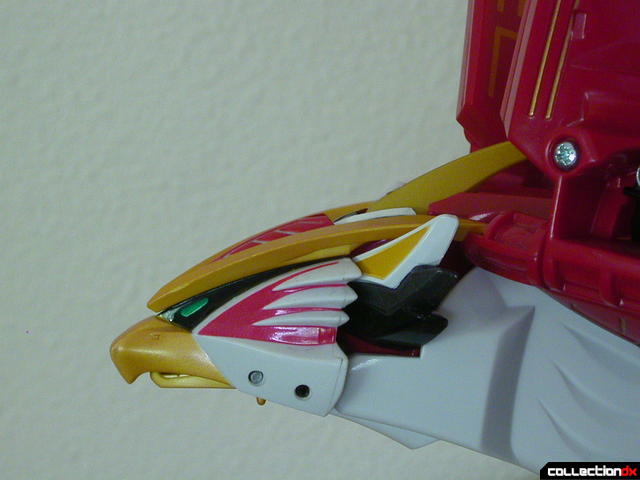 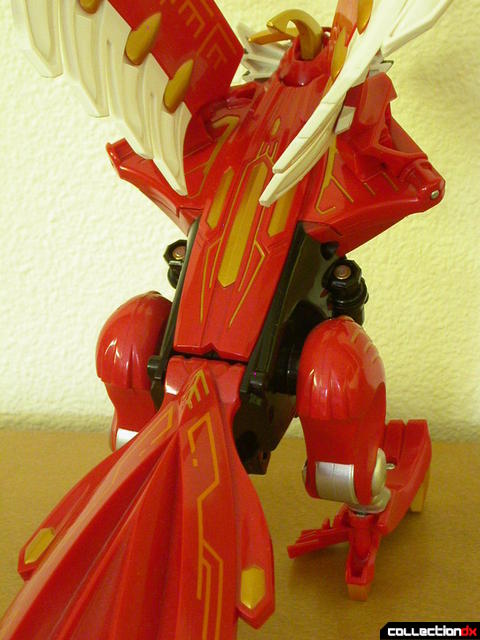 Nice review I never liked the Gao God remold ever either

You obviously did NOT hear what he said in the video. He said that he will NOT review Gao God. So don't even ask him again!

1. "jk" is an internet abbreviation for joking.

an idea here... how about the variations you can do with the power animals you have currently?

Oh, I already did that years ago- Hyakujuu Gattai- The Power Animals Assembled!.

i view these as separate toys from the main group and a short video might help those with collecting what they want in terms of how do i display gaoking? should i do the another version or what not?