The GX-35 Walker Gallia (超合金魂 ウォーカーギャリア) is the companion piece to the GX-28 Walker Machine Xabungle Released in 2005. Both toys hail from the show Combat Mecha Xabungle, which aired for 50 episodes from 1982-1983. 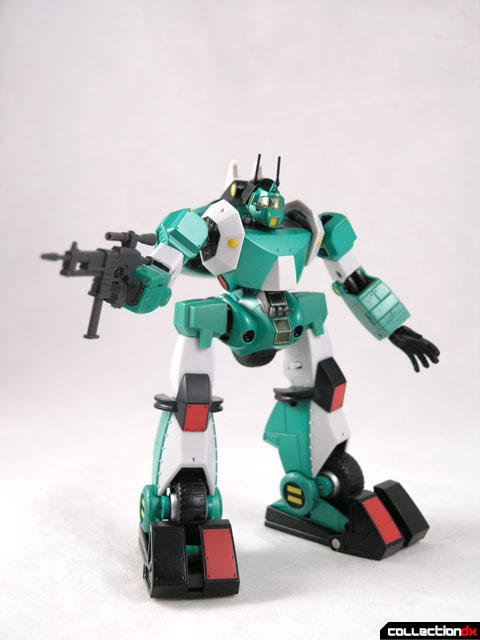 I got this in the mail from betatoys last weekend and I have to say what a great toy this is. If you liked Xabungle, you will love this.

Walker Gallia (also spelled Galliar) is a transformable mecha made out of two distinct vehicles. The first machine, the Gallee-Hover, is a hovercraft that forms the head and arms of the Walker Gallia. The Gallee-Hover is mostly plastic, with metal shoulders and arm connectors. The rotor on the back spins, and 2 small legs fold down from the arms to support it. 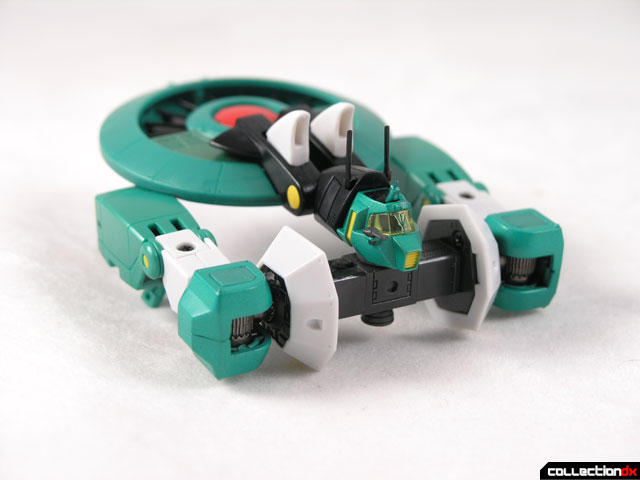 The Gallee-Will is a three-wheeled vehicle that looks like a futuristic pickup truck. It has a surprisingly large amount of metal in it. The three wheels are a hard rubber and the rolling action is smooth. There is a small articulated cannon on the front. 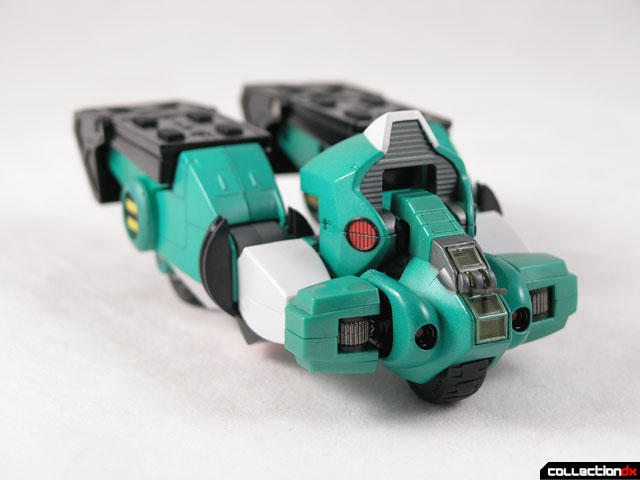 While the separate vehicles are interesting, ultimately we are here to talk about the combined Walker Gallia robot. 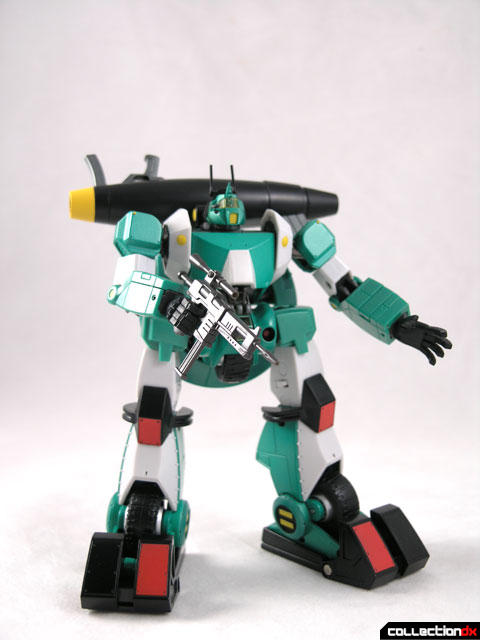 Transformation is simple – a far cry from the Xabungle. Make sure you unhook the small pegs on the inside of the upper thighs before attempting to transform it. In robot mode Gallia is substantially heavier than the Xabungle. The ample use of diecast makes this a satisfying piece of gokin. 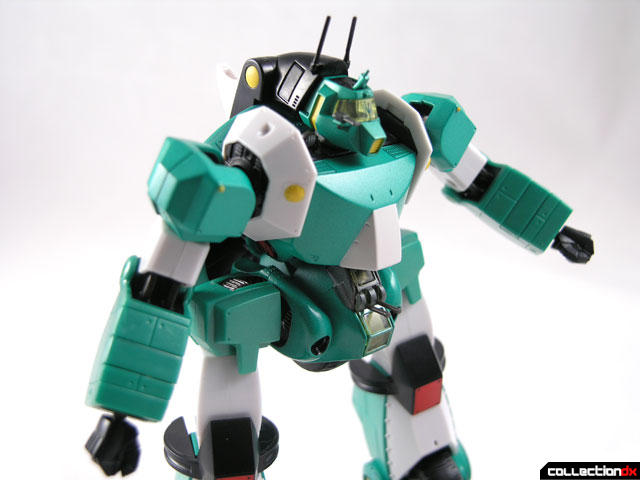 Starting from the top – the head is articulated but it’s movement is limited by its connection to the hover rotor. You have to attach 2 small black antennas to the head, and Bandai gives you 2 other sets of antenna in case you break or lose one. Next to the head is a small spotlight that hides in the shoulder. This spotlight is hard to get at, and I often just a small knife to pry it up.

The shoulders are all metal, including the outer casing and the inner mechanism. The shoulders click with detented joints that have thick teeth. The biceps swivel and the elbow has the standard range of motion. The lower arm opens to reveal a place to store the fists while in Gallee-Hover mode. While 3 sets of fists are included, only the closed fists can be stored in the arms. 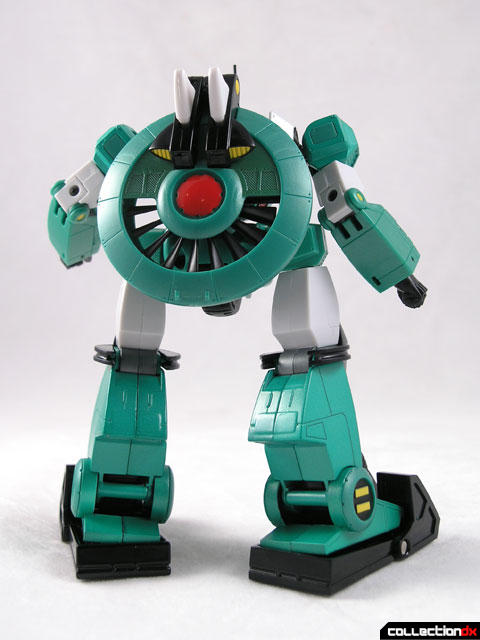 The Torso is nice and solid, and has a nice waist-joint.

The legs can rotate out at the hips and the knees click in and out of position. The feet can go forward and backwards, and there is even a little side-to-side motion thanks to a separate foot plate. Small pads on the bottom of the feet are spring loaded – a nice touch. The toes do not bend much. 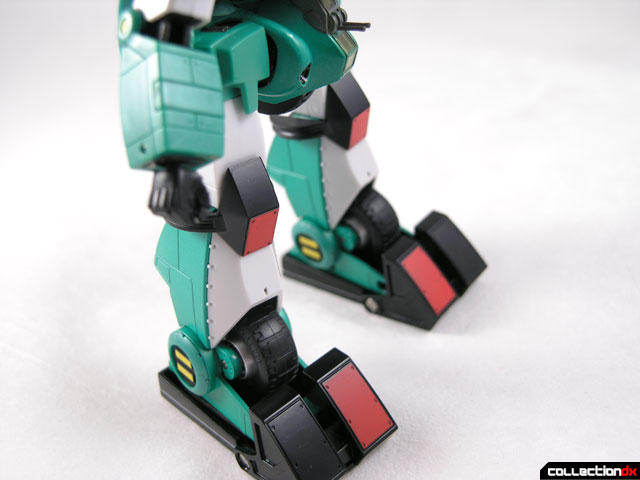 Gallia comes with a ton of accessories, including: 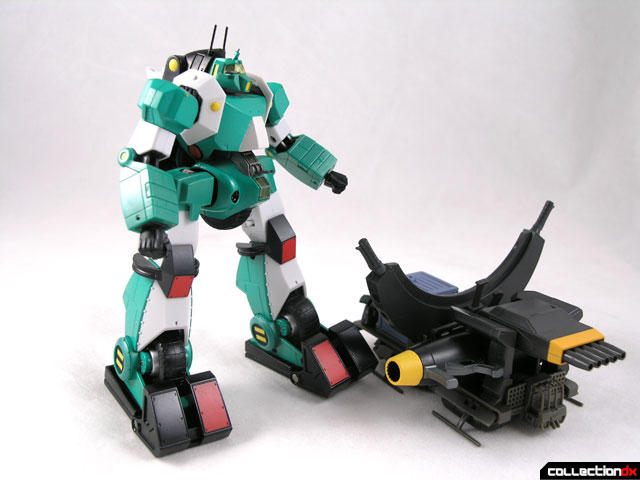 Instead of the usual stand, Walker Gallia comes with a small Hover Truck model kit that you have to assemble. You can display it as a stand alone vehicle with a flat bed, or you can add on a second part that acts as a holder for all of the parts. 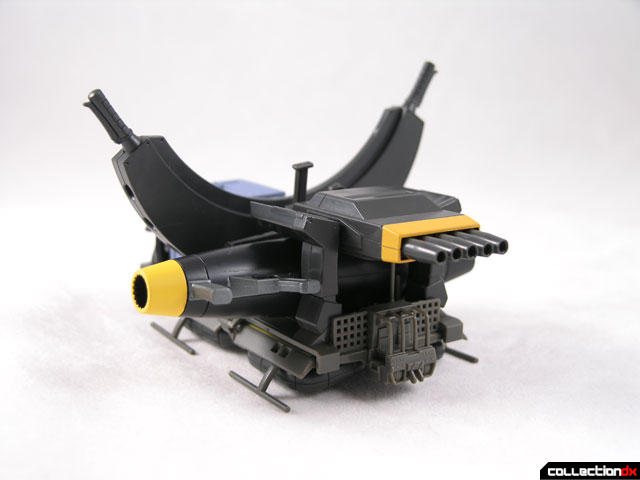 It is a unique idea, but the legs of the Hover truck are flimsy, and I wonder how they will fare over time. All of the weapons can store on the truck, as well as some of the other odd accessories. One accessory is a blue box with an opening top. Inside the box there is a circular item attached to the bottom. I have no idea what this is. Next is a Red Hover cycle – perhaps one of the smallest SOC accessories ever. There is no distinct slot to place this in, so be careful not to lose it. Finally there are 2 step-shaped green parts. These are adapters so that the Walker Gallia can use the skis that come with the Walker Xabungle SOC. 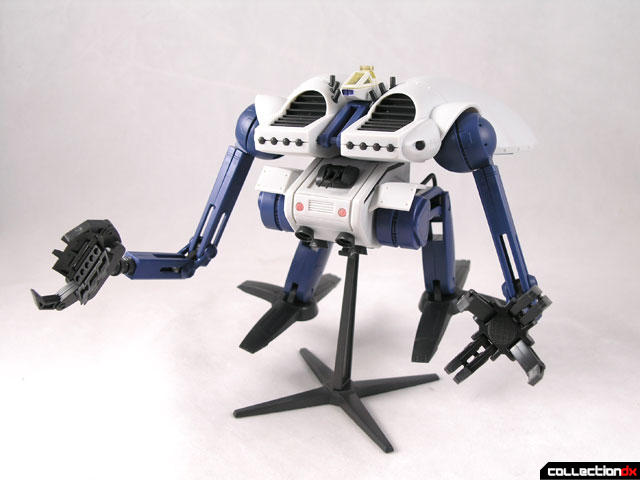 The model kit is simple to put together, but may be a bit confusing to the novice modeler. The arms seem tricky at first, and the non-English instructions don’t help. It took me (a casual model builder) just over an hour to put this kit together. It is molded in color, and requires no glue or paint. A large portion of the kit is already assembled for you in the box. 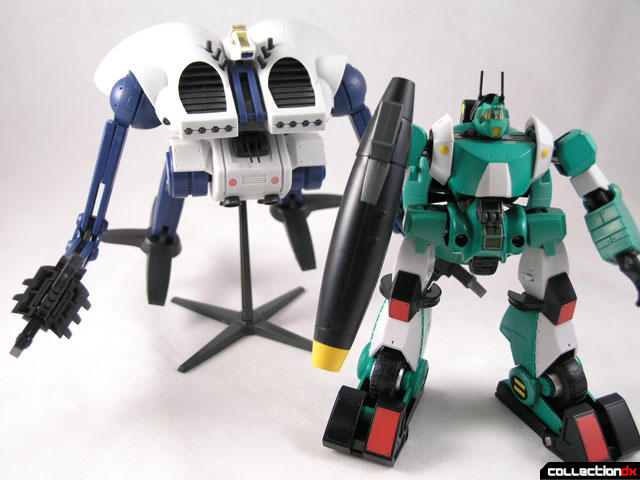 While the Durun is neat, I find the design odd and hard to display in my collection. The Durun is large and oddly shaped. It’s larger than the Gallia. I think some paint detailing and weathering would add a lot to this model’s appearance. While the Xabungle and Brockary share a similar design aesthetic, the Gallia and the Durun are an odd couple. 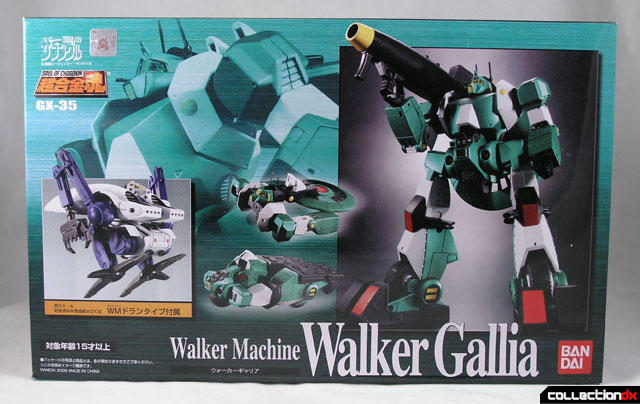 Both toys are packed in the typically beautiful Soul of Chogokin Box. Inside is two boxes. One tray has all the parts for the Gallia, packed in flimsy transparent plastic. The other box is for the Durun. The Box is styled just like the old model kits. I am pretty sure the Irongear used in the box photo is the Clover DX Irongear. 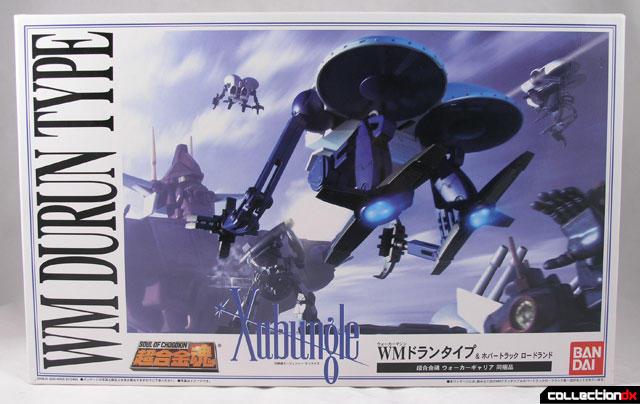 Overall, I think the Walker Gallia is a winner. The Durun kit is ok, but consider it a bonus. The Gallia is worth the purchase price alone.

i imagine it is a high quality chogokin, and would be a great entry for your very first soc collection. however, its design is not without flaws. its design is timid and stagnid. weapons that could have done better. this vs blue gale xabungle? id go with blue gale.