Goodrock (full name "Goodrock: The Defender Of The Planet") is the companion piece to the Viking Robot toy. Both toys were made in Hong Kong for the Italian market in 1979. Both toys come in the same box and are shown battling one another on the front. The top and bottom sides of the box show the heads of both toys with the names of each next to it and a check mark in the appropriate box so that you know which toy you are buying. 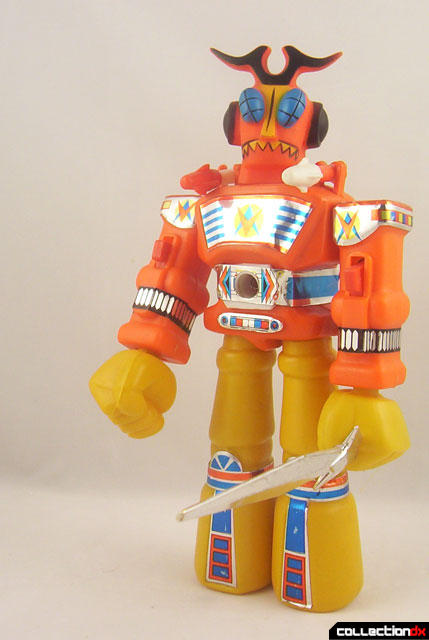 These 10" tall toys are the smallest known Junior Machinders and share the same molds on the arms. They also have the same fists as the larger Junior Machinders which tends to look a little bit silly. Goodrock, in particular, is an odd toy. Its head is based of off the Pegasus and Lantaurion toys from the Micronauts line. With bug eyes, sharp pointy teeth and horns on his head, you'd probably never guess that he is supposed to be the hero of the two! On top of that, he has no feet! This makes it basically impossible to raise the arms up or else the toy will fall forward.

With that said, I think it is easily the better toy of the pair. With the torso molded in orange polyethylene and the legs and fists in yellow, you get a more diverse color scheme than on Viking (if a whopping two colors can be called diverse.) More garish stickers come pre-applied on the toy, including some that resemble the insignia from Dangard Ace (the red and blue crossed arrows.) The head is of course made of soft vinyl. Goodrock also comes with a better weapon than Viking, a big silver sword that he holds in his left hand. It features the same missile launcher in his stomach as Viking. The alternately colored missiles are again stored on the shoulders. 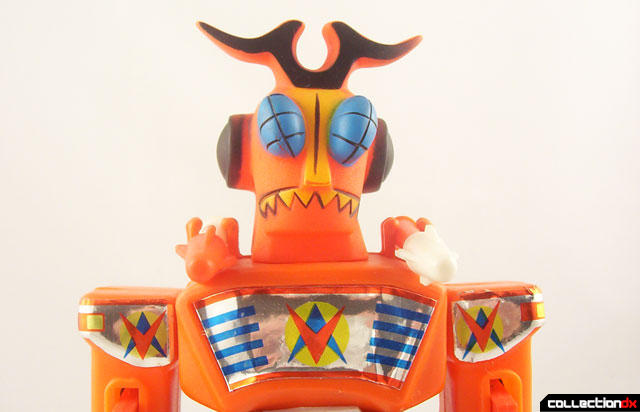 This is a pretty silly looking toy and only of interest to the most hardcore Machinder or Micronaut collectors. It is among the easiest and cheapest Junior Machinders to get though. It shows up frequently and only costs about $40 or so.

The mere fact that this silly-looking robot was produced is a witness to the giant robot anime craze that we had in Europe (especially in Italy, France, Spain and here in Malta) back in the 70s. Many would still say 'those were the days' but being a perfectionist I always wanted the toys to look EXACTLY as they do in the anime and so I prefer today's chogokins than the ones produced in the 70s.