The Bulltaurus Rider Beast Combination Chogokin DX 超合金ＤＸ騎獣合身ブルタウラス (aka DX Bulltaurus) comes from the Super Sentai show  Seijyuu Sentai Gingaman (lit. Star Beast Squadron Gingaman) which aired on Japanese television from 1998 – 1999. It was subsequently rebroadcast in the US as Power Rangers Lost Galaxy. 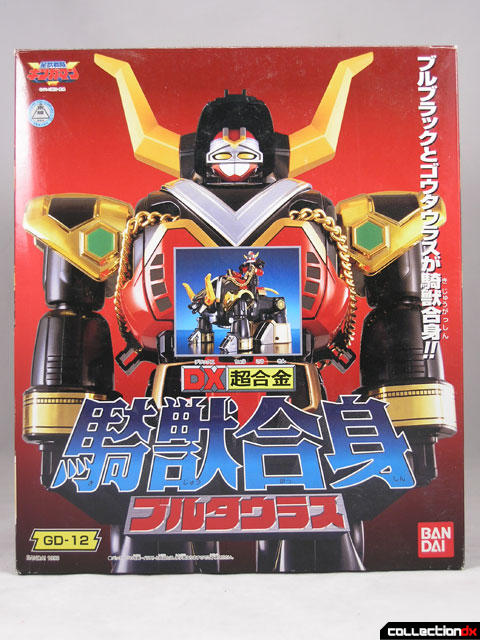 The synopsis, from Wikipedia:

“3,000 years ago, the Barban space pirates invaded Earth. The Seijuu and the first Gingaman, warriors of the Ginga forest, fought them with the mystical power called Earth and eventually were able to imprison them. Subsequently, the Ginga people cloaked their forest within marked boundaries and passed on the duty of Ginga warriors through generations.

Hyuuga, Hayate, Gouki, Hikaru and Saya are chosen as the 133rd warriors of the Star Beast Swords. Ryouma is very happy that his elder brother Hyuuga succeeds to the honorable title. When Elder Ohghi holds the succession ceremony of Star Beast Swords, an earthquake breaks the seal of Barban.

Orghi orders the 133rd warriors to get the GingaBraces hidden in Roaring Mountain. However, the Barban attacks them to prevent the birth of the new Gingamen. During the battle, Hyuuga got swallowed into a crack in the ground which Captain Zahab of the Barban created. Becoming enraged, Ryouma activates his hidden Earth and awaken the GingaBraces. The Gingamen fight together with the Starbeasts against the Barban, who desire to revive the Demon Beast, Daitanix, on whose 'corpse' they built their castle.” 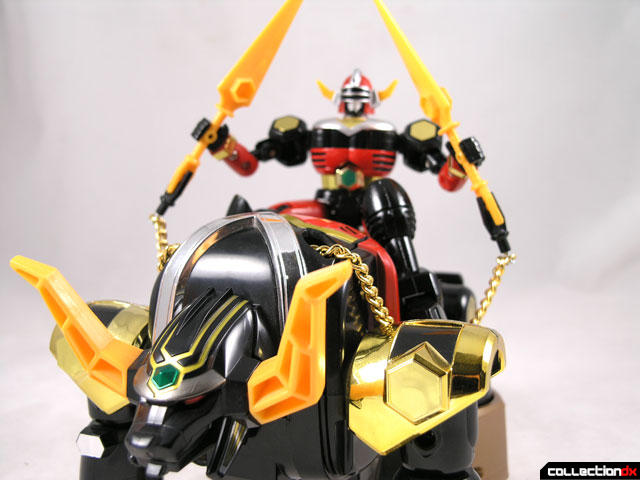 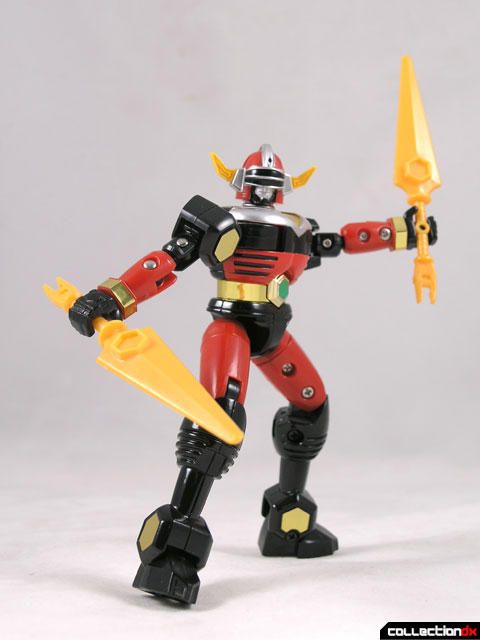 The Black knight figure is a reasonably well articulated figure, and actually has a good amount of diecast in him. The lower legs and body are solid metal. He can grip both halves of his weapon, the Bullsword lances in either hand. They are held secure in place by pegs. The Black Knight also has an action feature – push the lever down on his back and the arms will swing wildly, replicating sword slashing action. 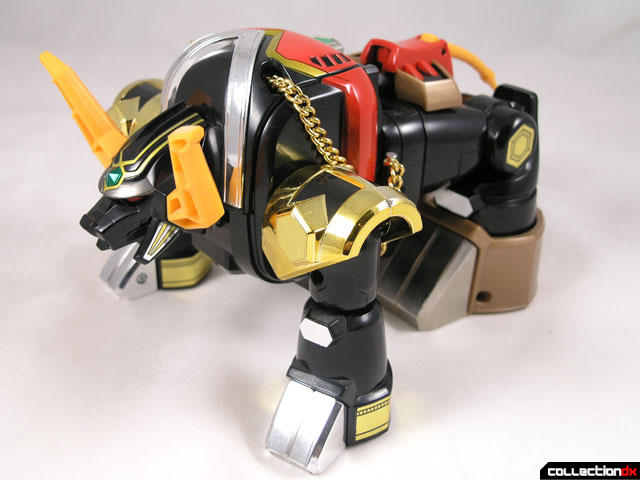 GouTaurus is actually a bull that the Black Knight rides. The toy has little articulation, but is still very cool. The jaw opens, the front and rear legs move a little, and the tail is moveable. The only diecast in this part is the huge blocks of metal that make up the rear toes. These add a substantial weight to the figure. There are also 2 gold metal chains that act as reins for the bull. Black Knight can ride on the back of GouTaurus and hold the chains in his hands. The chains can also attach to the ends of the Bullsword Lances.

Bulltaurus transformation is simple, but interesting. First step is to straighten out the rear legs and then you rotate the lower parts. This twisting action actually lowers the legs. You can also do the same motion with the upper arms. The torso opens up at the top and you can insert the folded up black knight inside. The chains attach to the sides and the head folds back to reveal the face of BullTaurus. In robot mode, BullTaurus can hold the lancers in either hand, or they can combine to form the Twin Bullsword Bison Fierce Cut. 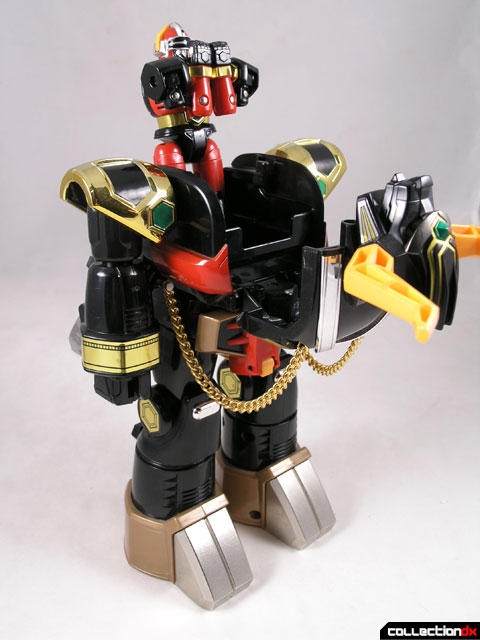 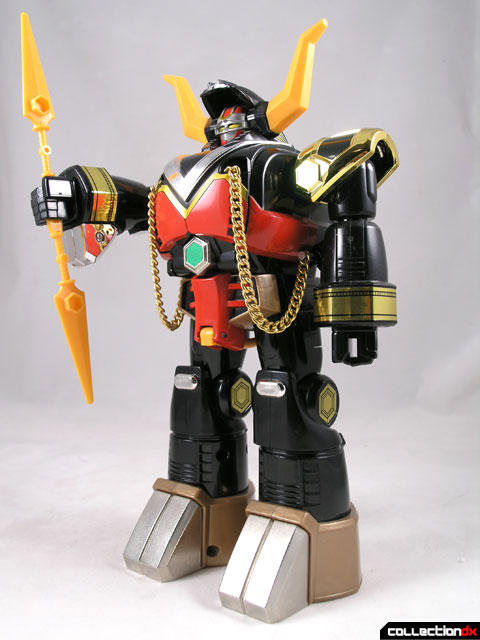 Changes made to the US version

The DX BullTaurus was renamed Deluxe Defender Torozord as part of the Power Rangers Lost Galaxy line. While the Black Bull figure retained all its metal content, the Torozord lost it all. The metal chains were replaced with rope, and the metal toes replaced with plastic. The silver band on the chest, and all the other silver chrome was replaced with grey plastic with chrome stickers.

This is a really great, heavy toy. But it pales in comparison to the DX Gingaioh…. 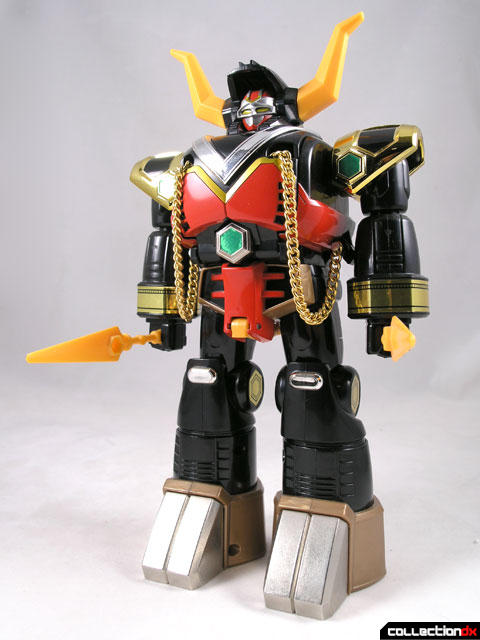 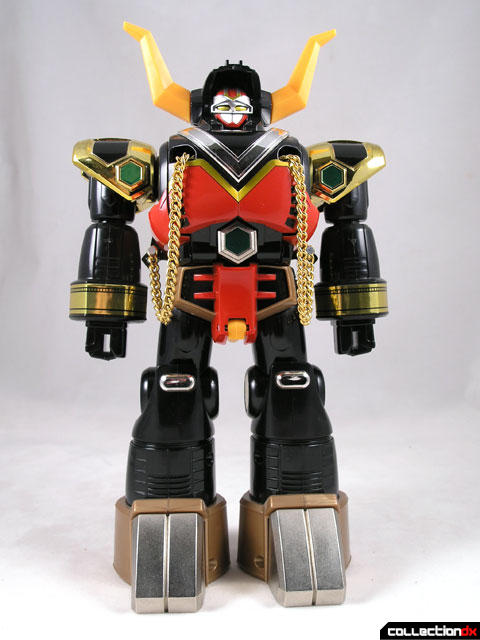 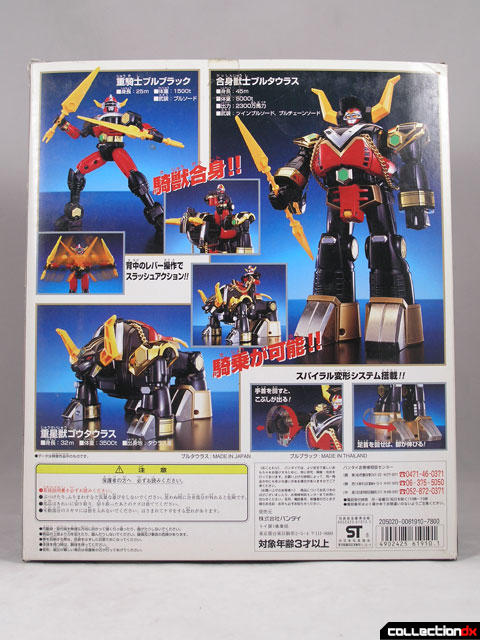 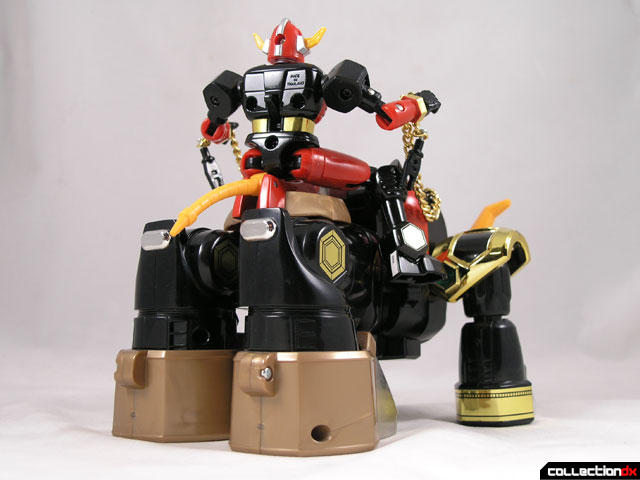 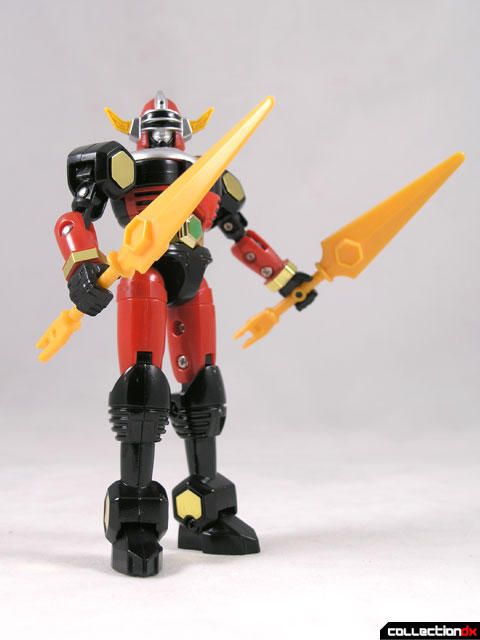 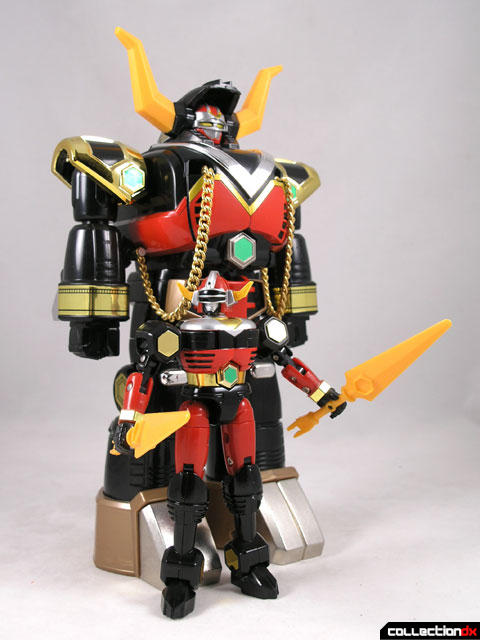 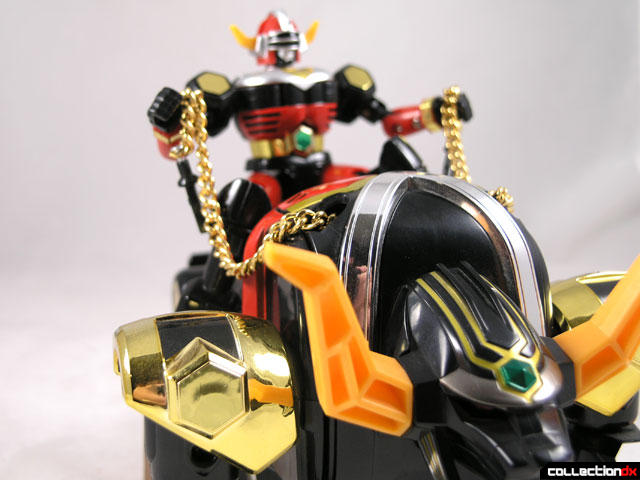 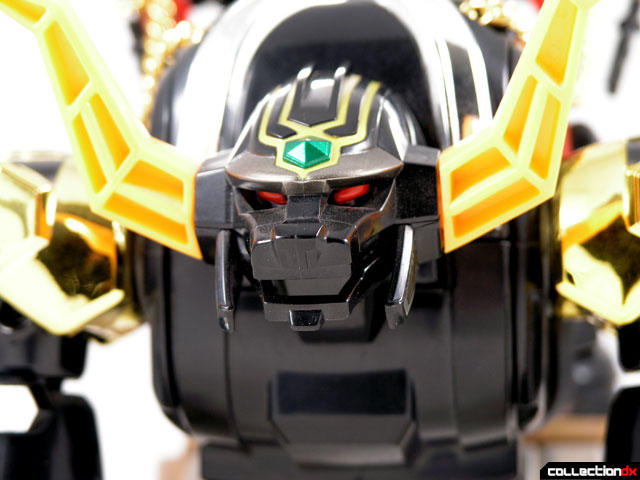 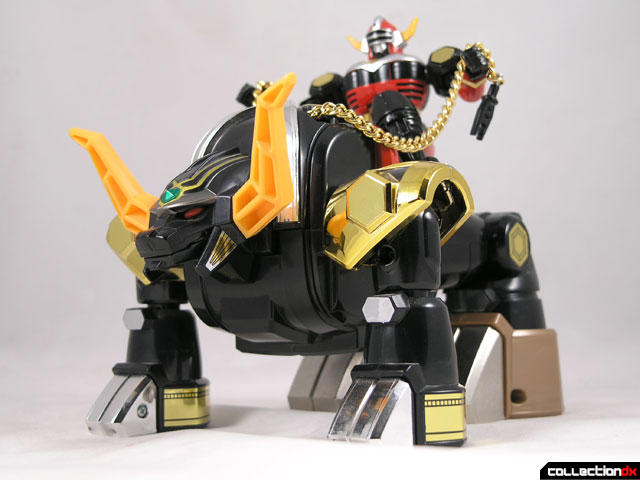 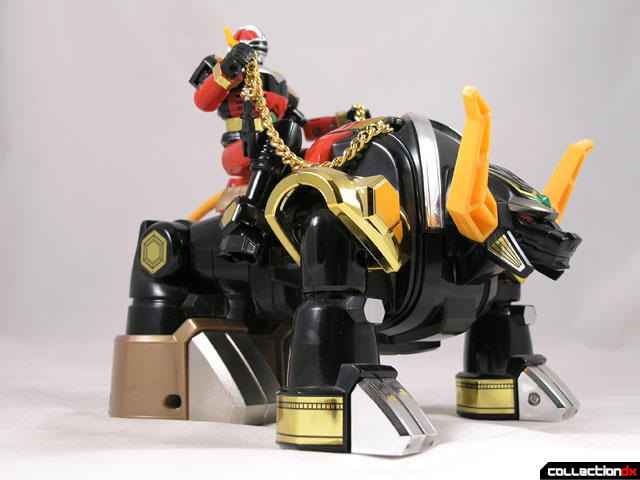 My friend just offer his Bulltaurus for 50$ is is worth the dough??? The toy is in good shape.

Provided its in the box and complete, yes, thats a fair price as of 6/2008

Finally picked Bully up. Glad I did. One of those toys I kept passing by on the local store's shelf, hemming & hawwing about jumping in, since I had no history connection to the thing. Great to have just for the luxurious black/gold/red design, and one of the more cool looking robotic animal designs from any sentai series. So worth the cheap current price they can be found for. $25-$40 U.S.dollars.

Interesting notes:
The Taurus is made in Japan, but the Knight is made in Thailand, both with great quality.
When the Taurus head is transformed into bull mode, the eye sockets of the bull head line up with red eye markings when rotated to final position, giving it the cartoon type "light up red" eyes when "activated".
Fits right in with old skool vintage DX sets of the collection. Very cool toy.