Though generally considered a part of Mattel's famous "Shogun Warriors" line of toys, Rodan is really a stand-alone entry in the "World's Greatest Monsters" line. If any other monsters were ever planned to be in this line, they were unfortunately never released. But Rodan is a great toy and a great companion piece to the Shogun Godzilla. Until recent years, it was also the only Jumbo Machinder-style toy to be released exclusively in the United States. 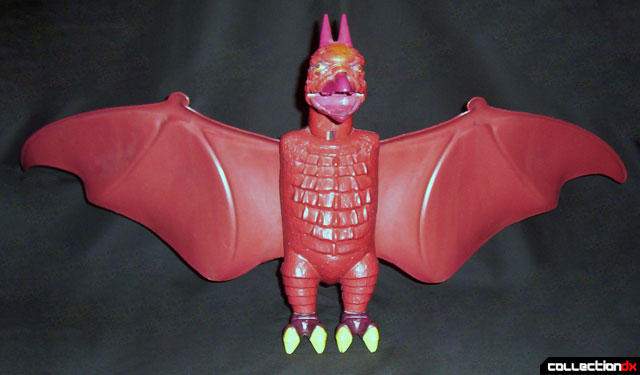 Rodan is not very poseable with the only real articulation being at the neck, which is on a nice swivel, allowing for a wide range of motion. The mouth also opens and closes. But there are several other nice features that more than make up for this. The wings flap and it can hold something in its claws via the use of some included rubber bands. These rubber bands are missing on almost all remaining specimens today but can be easily replaced. The toy needs to be assembled out of the box, but it's an easy process. However, if you don't have the instruction sheet, here's what you need to do:

First, attach the elastics to the claws. (You'll need just the right size elastics to get the proper tension. The instructions refer to them as number 27 size elastics but I couldn't find those. I simply bought a bag of mixed sizes and experimented. Also, you may find remnants of the original elastics that would need to be removed before proceeding.) It's easier to do this without the wings on so you don't have to deal with them flapping around. The idea here is simple but can be a little tricky to do simply because you are working with limited space. The claws are made of two plastic pieces on a hinge, each with a hook inside for you to wrap the elastic around. Attach one end of the elastic to one hook, like on the claw on the right: 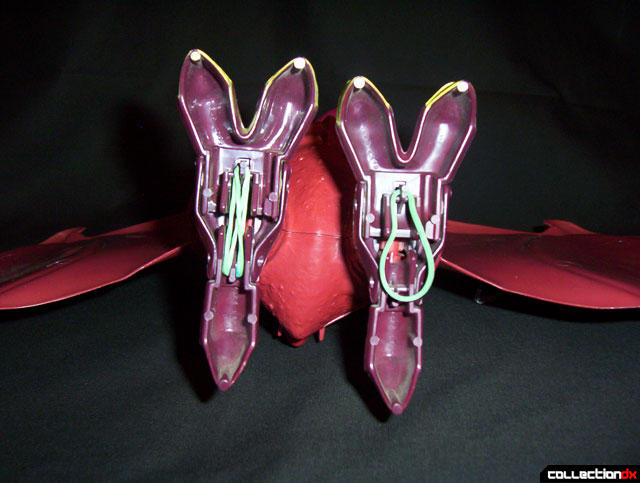 Then, pull the elastic down and wrap it around the second hook. 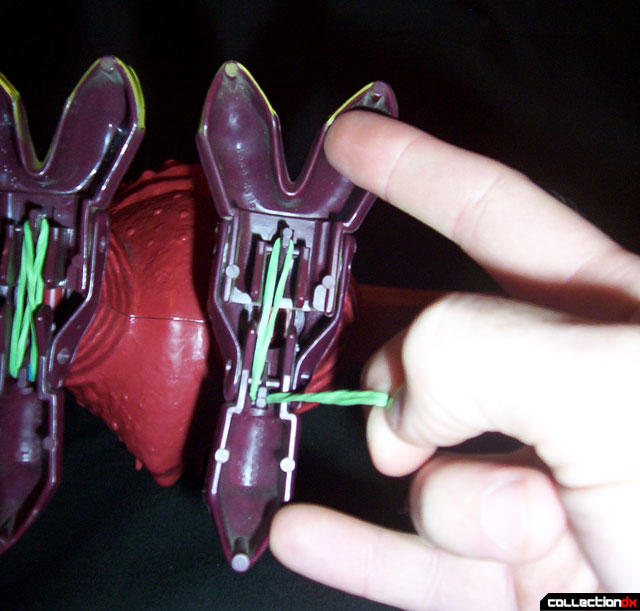 The tricky part is next when you have to then bring it back up to the first hook and attach it again here. You are basically folding the elastic in half and attaching both ends to the same peg. Do the same on both claws. 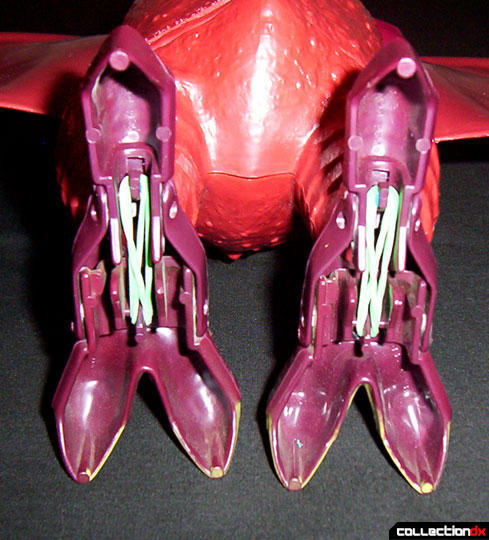 The claws will remain open so that you can stand the toy, but each side has a protruding piece of plastic in the middle that is pushed in when you place something in them. This starts the process of closing the claws, and the tension from the elastic finishes it, allowing it to get a firm grip. As you can see from the box, a Shogun Warrior Dangard Ace fits nicely in there! 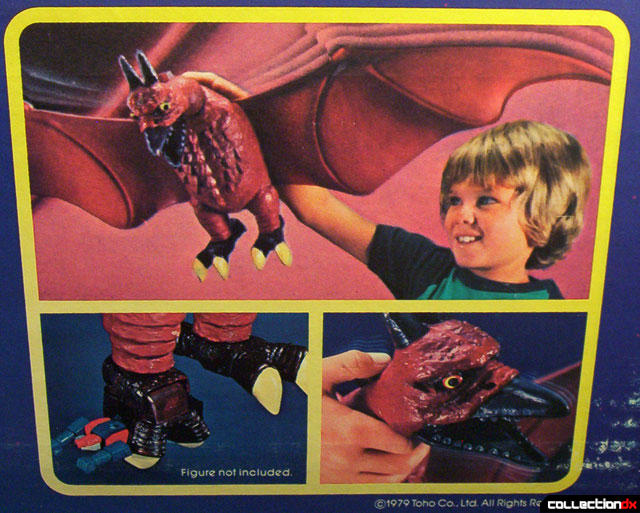 Next, remove the back plate by pushing the tabs OUTWARDS and lifting. Then, you need to take the right wing, insert it into the body by sliding the edge under the tabs inside the torso and then push an elastic through the hole on the inside edge of the wing. The instructions say to insert the wing first, but I find it's just as easy to do the elastic and then the wing. 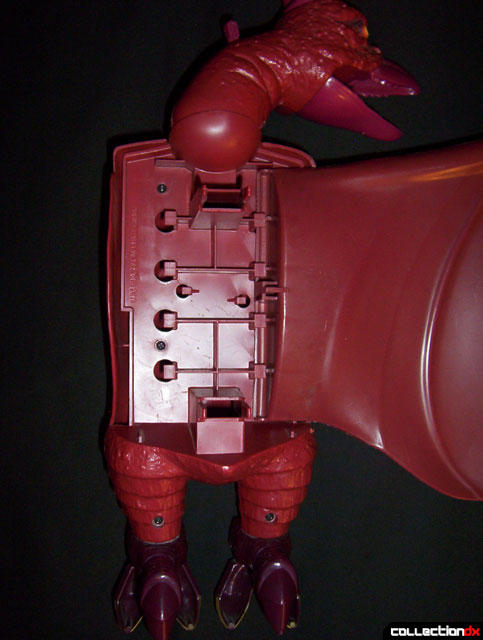 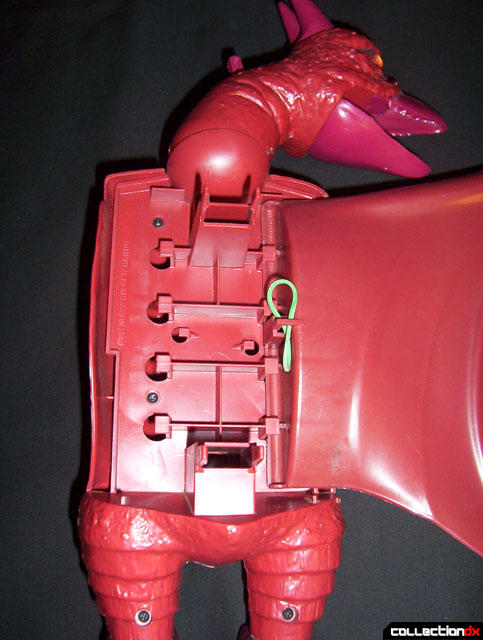 Once the elastic and wing is in place, you need to stretch each end of the elastic over to the hook on the left side of the body and attach them. When this is completed, repeat the step on the other side, stretching the second elastic from the left wing to the right hook. 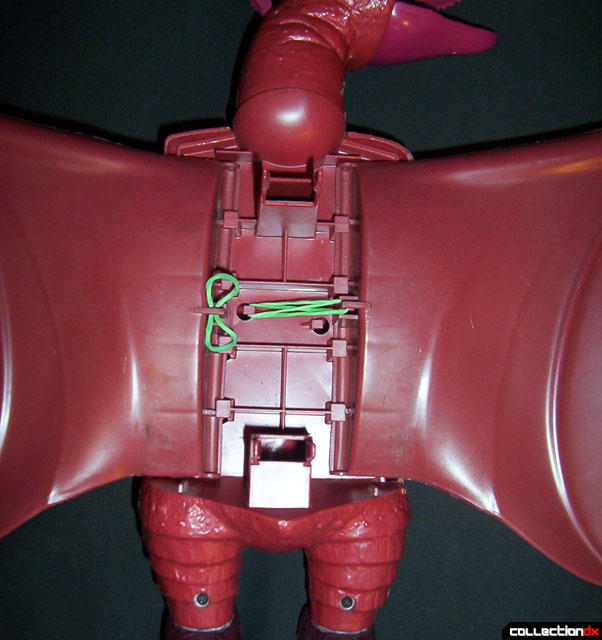 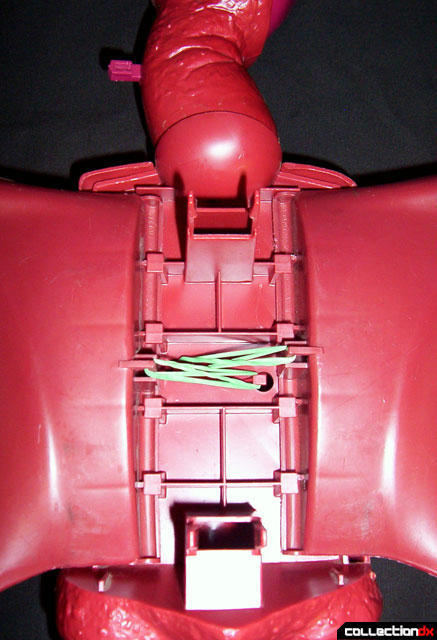 Now, you can re-attach the back plate. This has some holes in it that allow for easy handling of the toy, as well as the ability to suspend it from the ceiling so that you can display it in flight! Simply shaking the toy will cause the wings to flap, much like a rubber bat.

One thing that often confused me until I got this toy was how it "squawks", as the box proclaims. It turns out it is simply the ratcheting sound that the lever that opens the beak makes. Speaking of the box, not all are the same. Some proclaim the toy to have a 41" wingspan, while others have a corrective sticker over that saying 38" inches. Amusingly, the side of the box still says 41" on these. 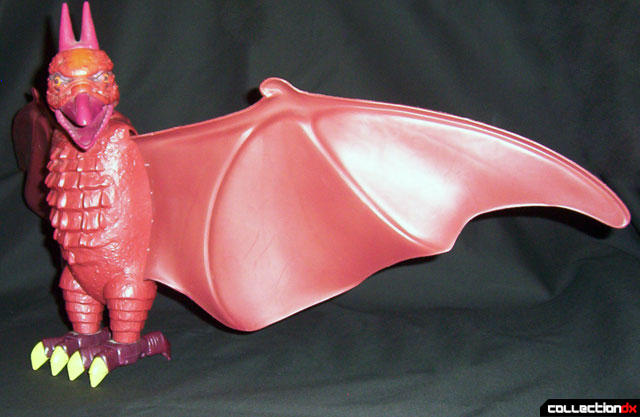 Much like the Shogun Warriors Godzilla, this probably appeals more to monster collectors than Jumbo fans, but it's a great toy nonetheless. It's probably the hardest of the Mattel jumbos to get, especially in the box.