Power Animals are no different from those found in the wild today. They have only lived far longer, and can regenerate themselves much faster thanks to the power of the Earth which has been absorbed into them over the centuries. This has increased their defense, intelligence, and size as well. They are also capable of merging their bodies together to form incredible humanoid-shaped warriors which stand several stories tall, and have weapons & special powers granted to each. Highness Duke Orgu Ura creates a powerful new creature called Tombstone Orgu, which resists just about everything the six GaoRanger can throw at him. Already with more than half of their Power Animals injured from previous Orgu battles, Gao Muscle Striker is also no match for Tombstone Orgu. As the giant Orgu approaches the downed hyakujuu gattai, a new Power Animals steps cautiously onto the scene- Gao Dias! But after restraining and subduing the powerful new Orgu all by itself, why then does the Power Animal calmly turn his back on the GaoRanger? 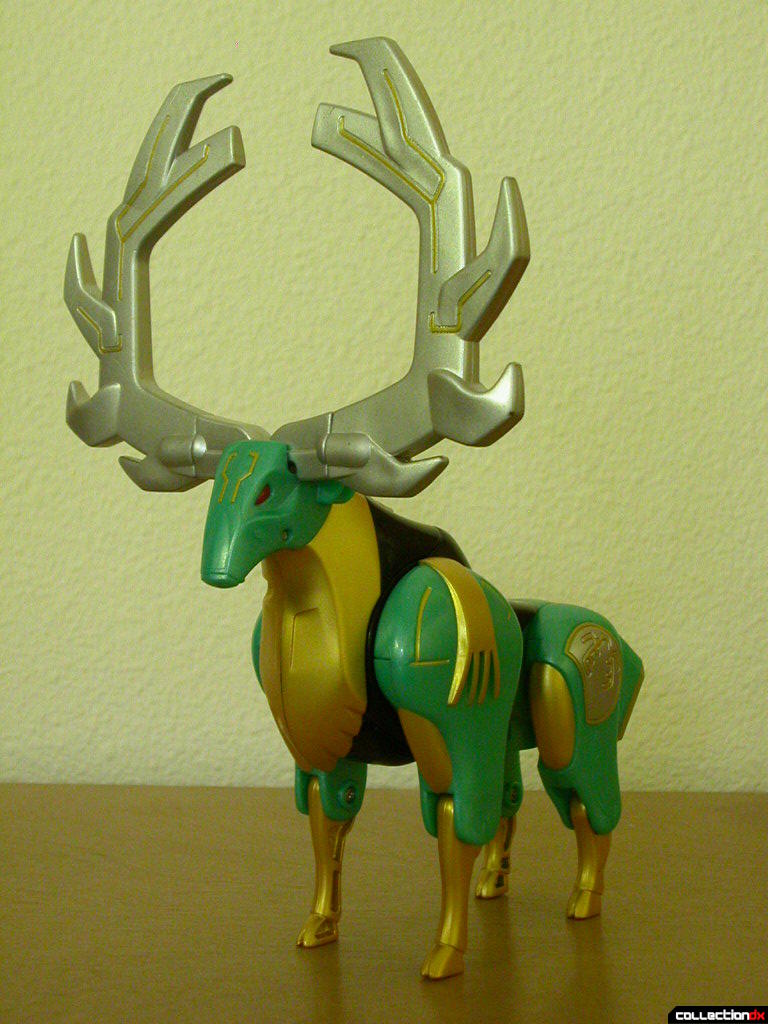 Gao Dias (back) is an additional Power Animal controlled by Gao White. He is an elegant-looking Power Animal dressed in a sea green ABS plastic, with gold, black, & silver paint applications, and small red eyes. Though the Japanese name for him really is Gao Dias, he is [for you hunters out there keeping count] a ten-point buck deer, and he is a proud creature. He has a large chest & upper body, and then a small backside accented by a small [immobile] golden tail. His antlers are made of hard PVC, and then painted silver with small gold highlights. (Man- I tell ya, those antlers were very difficult to attach to the head out-of-the-box! And if they’re not stored perfectly in that box, they can become slightly warped; as mine did if you look closely.) Like PA-2 Gao Giraffe, Gao Dias is sufficiently front heavy that one of his back legs can be lifted a little. Or his head & neck can rotate downwards a little for a limited pose.

For those of you wondering what the differences are between PA-6 Gao Dias from “Hyakujuu Sentai GaoRanger”, and its English-speaking counterpart, the Deer Wild Zord from “Power Rangers Wild Force”, there is only one big difference:

Otherwise all moldings & colors (there was no die-cast metal in Gao Dias) were left intact. The Deer Zord was not released individually, but as one of five components in the Deluxe Isis Megazord set. Gao Dias, also, was released as part of a special release DX Hyakujuu Gattai Gao Icarus set, but could alternately be obtained individually (as it is here), which it wasn’t for the “PR” release. For that matter, the Deluxe Isis Megazord never made it to American shores. It was, however, released in the UK.

Gao Dias is a fair Power Animal. His special feature isn’t really useful until you combine him with one of the combo mecha. All I can really give him credit for is his appearance. That is both the upside and downside at the same time. Mildly recommended. 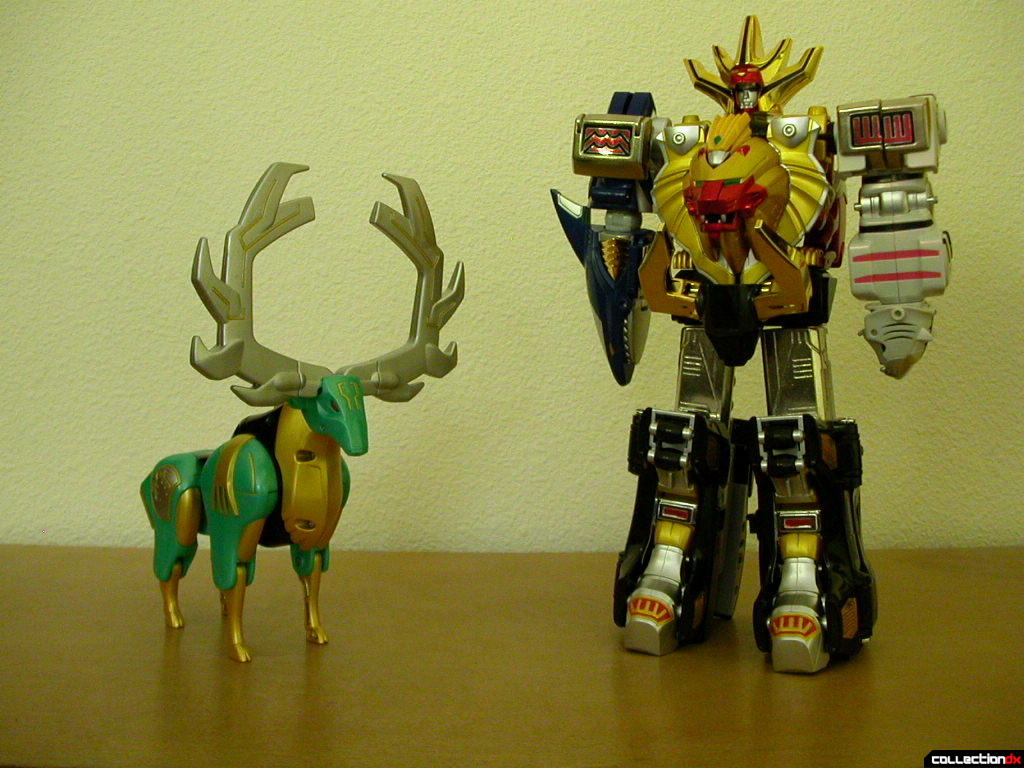 Shirogane knows exactly why Gao Dias turned away from them, and he feels very guilty about it. Before the end of the war a millennia ago, then-shrine priestess Murasaki and Shirogane used to sing regularly to Gao Dias to soothe the Power Animal. Then some Orguettes came and attacked them. Murasaki blocked a hit intended for Shirogane, but the blow hit her throat and she lost the ability to sing. Gao Dias blamed Shirogane for not protecting Murasaki, and did not return to listen to him play his flute alone anymore. But now, in order to appease Gao Dias, Murasaki’s granddaughter- Tetomu- and Shirogane play the song again to convince the Power Animal to help. Gao Dias approves, and gives Tetomu his Gao Jewel. She gives it to Shirogane, who hands it off to Gao White (Sae Taiga). Gao Dias has a power to rapidly heal other Power Animals (Dias Healing). His full potential becomes apparent when he takes Gao Tiger’s place, and the Power Animals form Gao King Cross Horn. Already weakened by Gao Dias’ earlier attacks, Tombstone Orgu is not able to withstand Gao King Cross Horn’s Bubble Capture technique- which wraps the giant Orgu in a clear force field, and then vaporizes him. Another time, another Orgu, Gao King Cross Horn used the Horn Crash finisher- where it grabbed the offending Orgu by the waist, lifted him over its head, twirled him about a bit, and then tossed him across the city (where he promptly exploded) 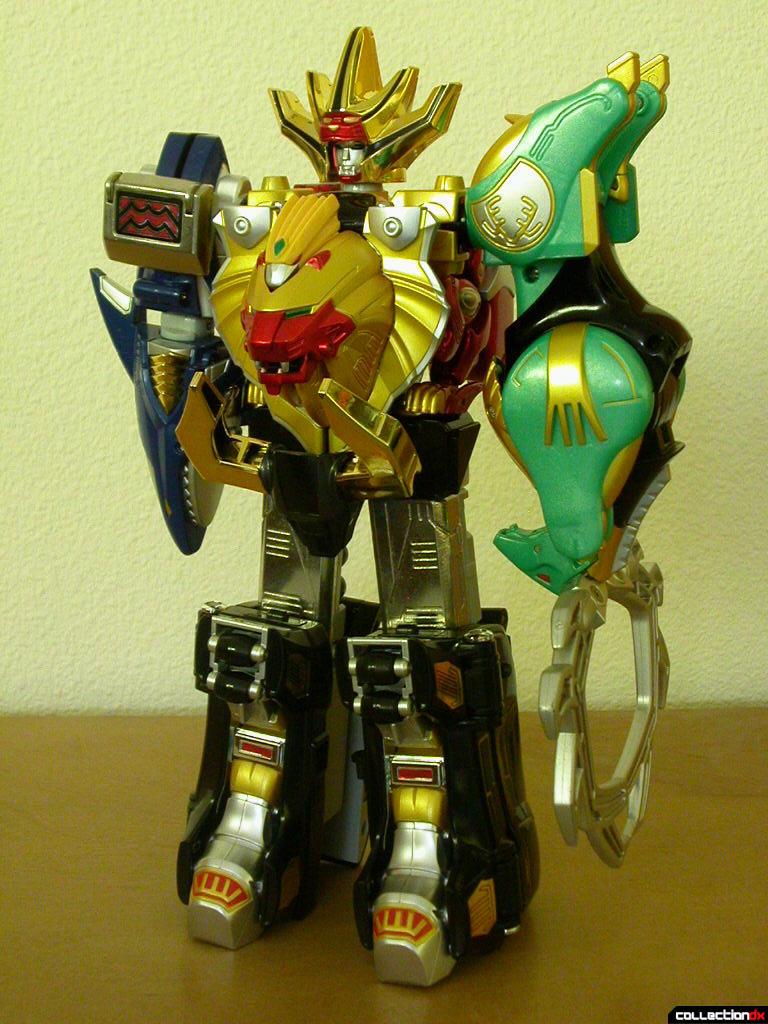 Gao King Cross Horn (back) is something of an interesting - I should note, final - upgrade: a large pair of silver claws with barbed edges. As the head rotates into position, the antlers slide completely together via an internal spring mechanism. I don’t know how well you can see it here, but there’s a tab on Gao Dias’ body which presses against an internal button, which causes the antlers to separate a little in its animal form, but then close when the neck rotates downwards. The special feature of Gao Dias is his spring-loaded antlers- which can open and close by pressing a long, narrow silver button on the back of his neck. The antlers swing open when the button is pressed, and snap shut when it’s released. Umm... a bubble wand for an attack feature??? Yeah- that’s a weird one. But that’s what Gao King Cross Horn brings to the table. (Although, I wouldn’t advise dipping PA-6 in real bubble formula...) I [personally] consider Gao Dias to be one of the most versatile and powerful of all Power Animals, seeing as how he was able to heal five PAs all at the same time, and then restrain Tombstone Orgu by himself. Plus, he gives Gao King Cross Horn more than one attack, which are each very strong. 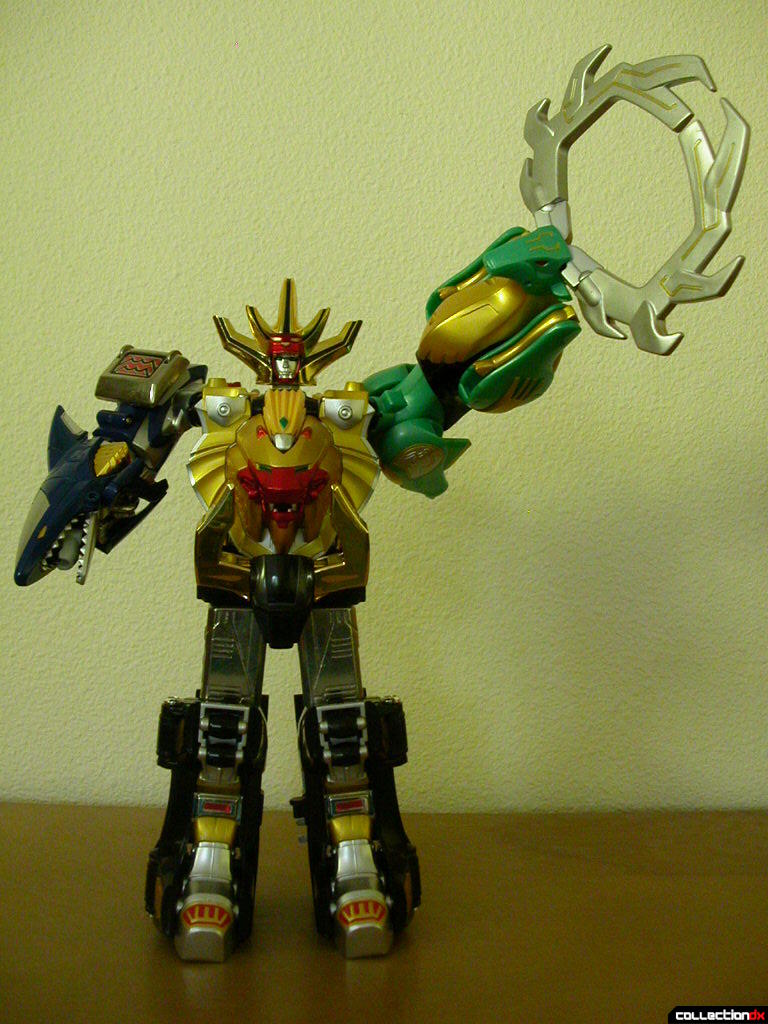 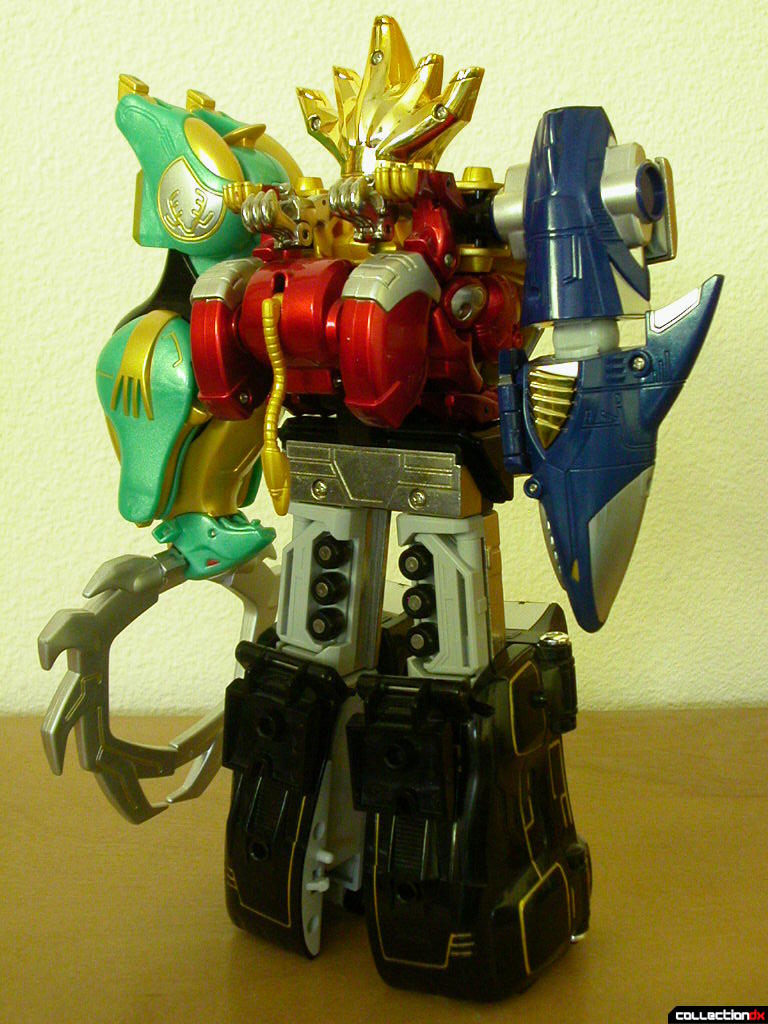 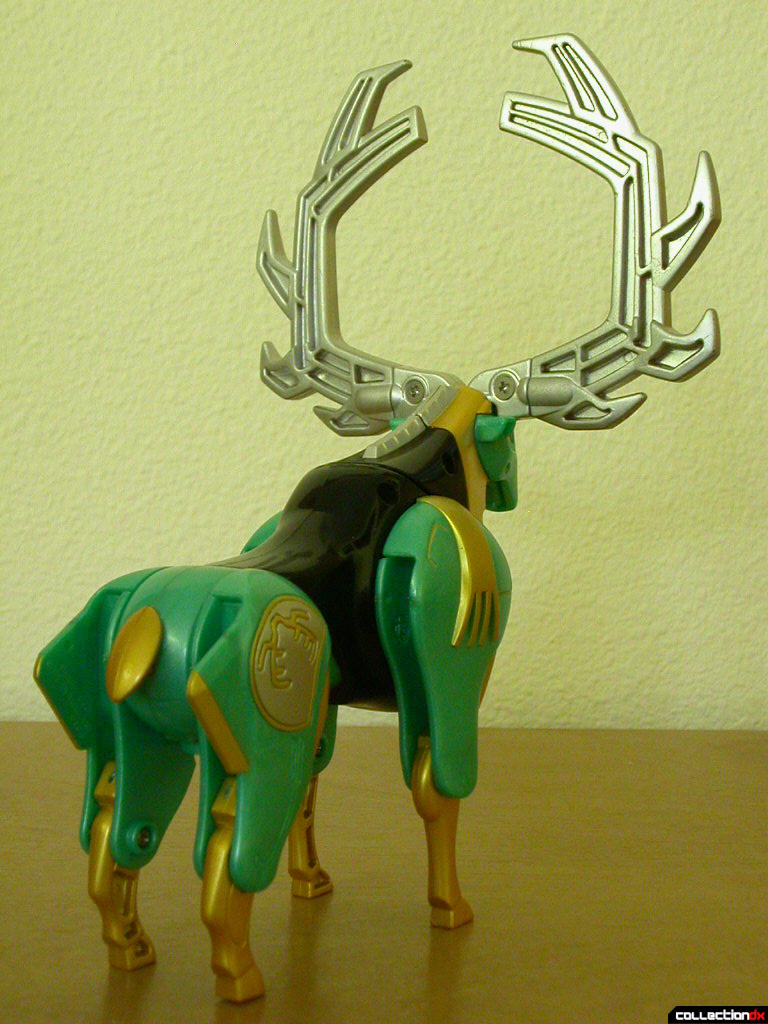 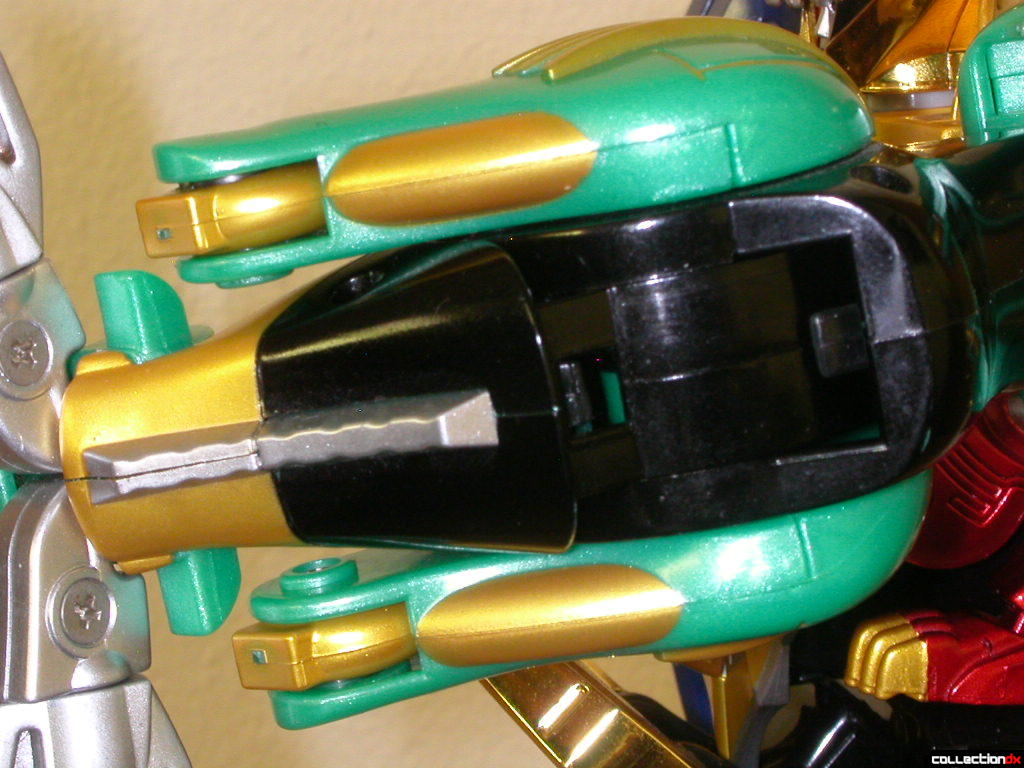 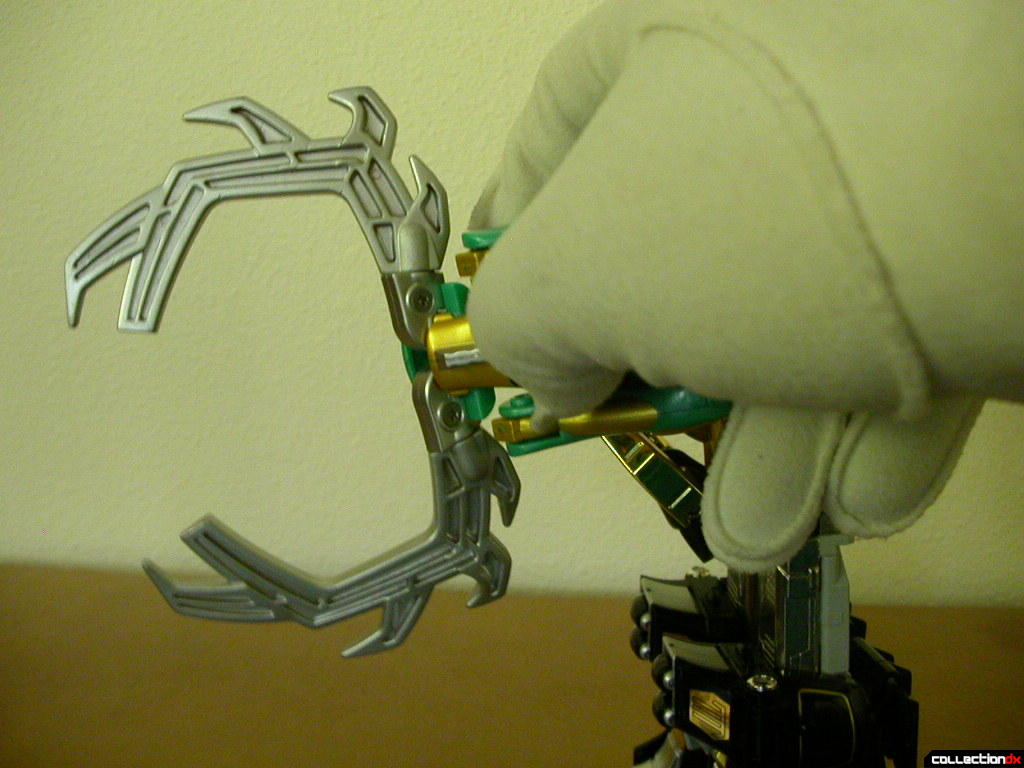 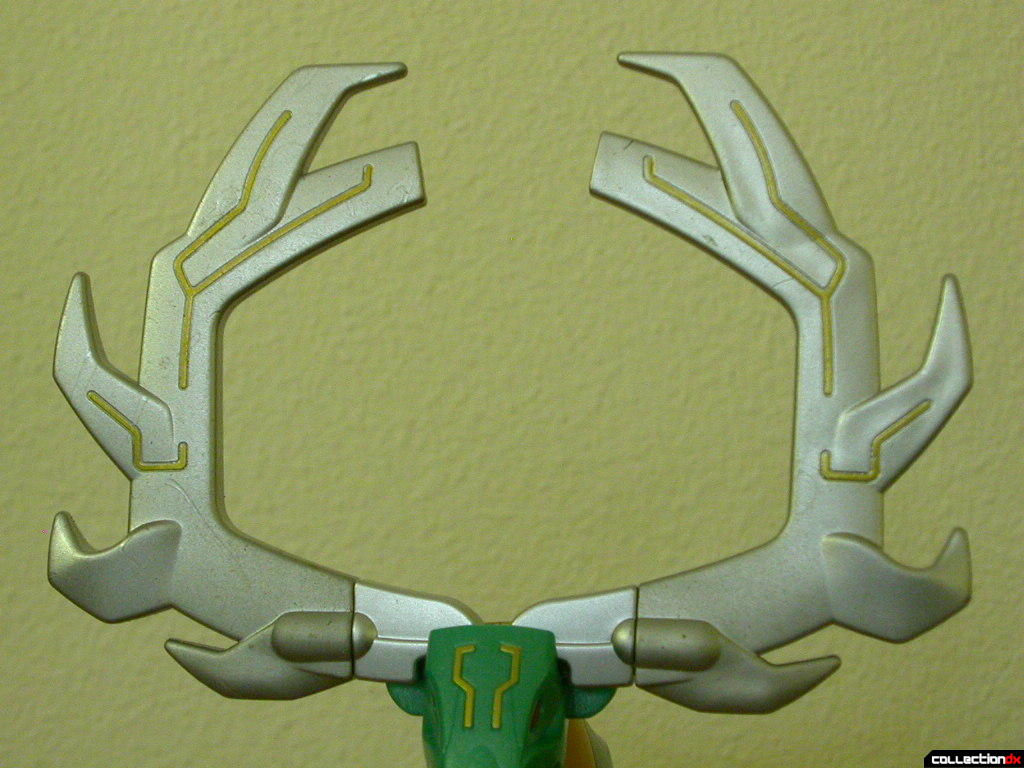 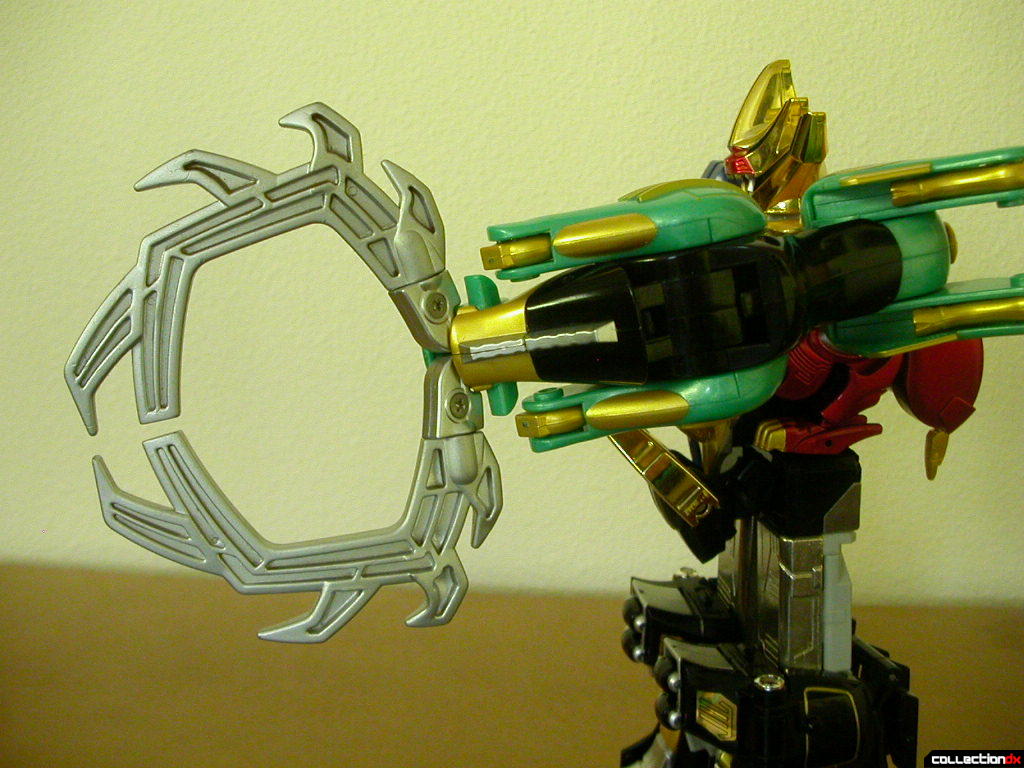 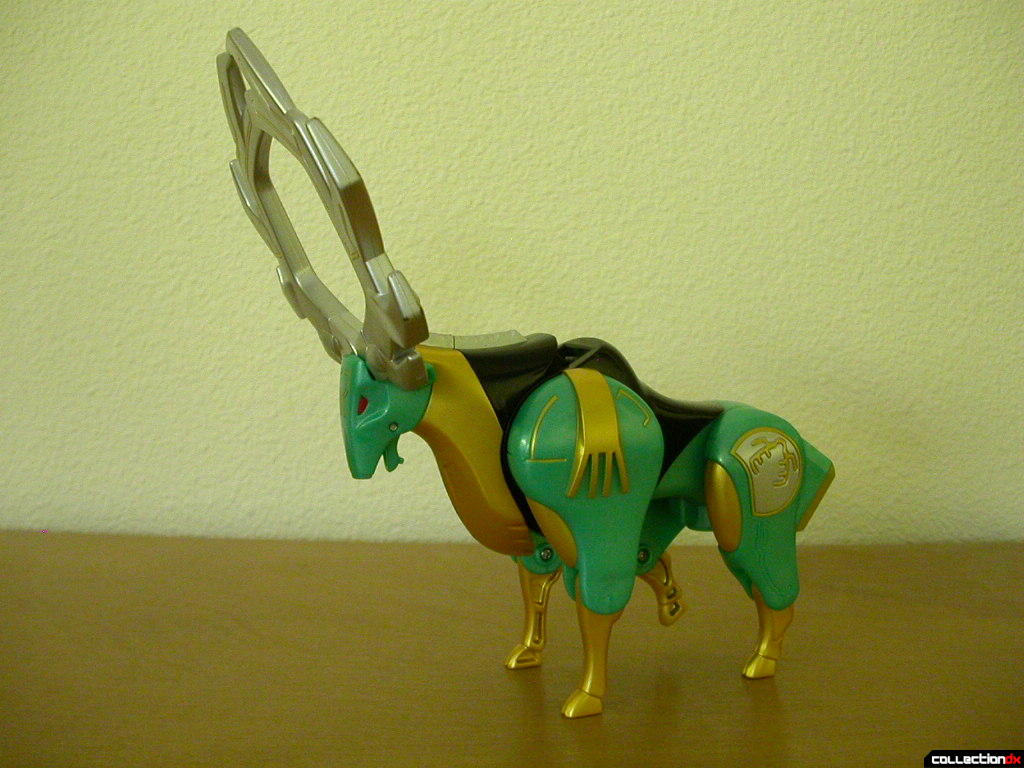 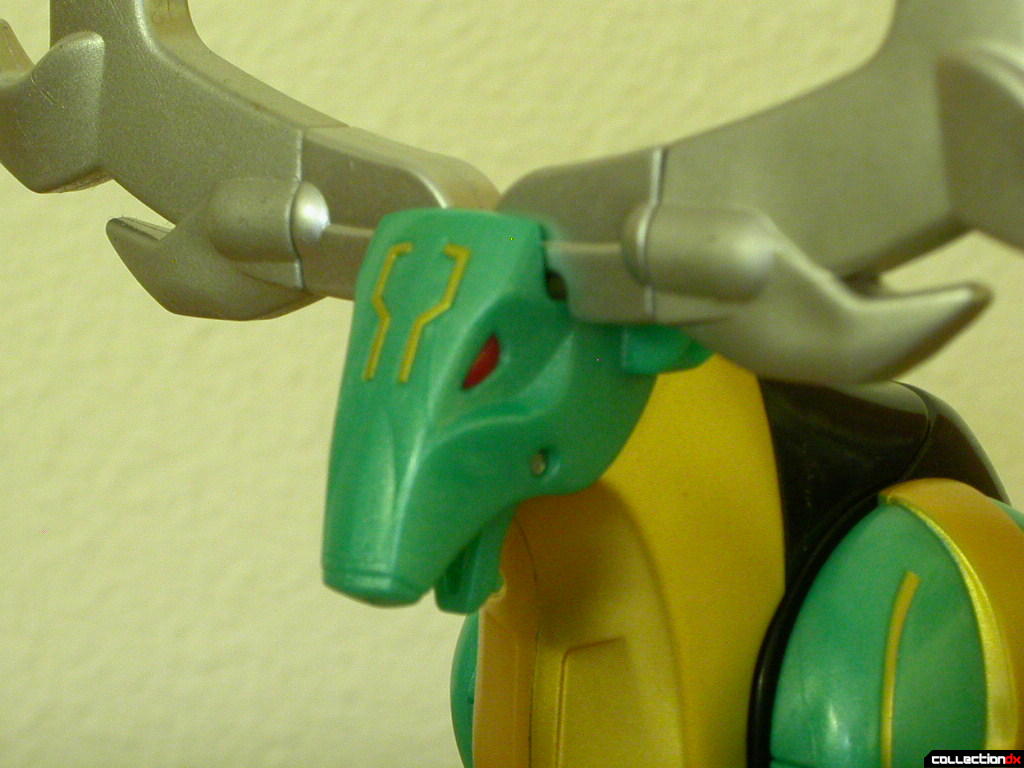