Gold Lightan comes from the show Gold Fighter Gold Lightan (Ougon Senshi Gorudo Raitan - 黄金戦士ゴールドライタン), which aired from 1981 to 1982. The story revolves around Hiro, a young boy who fights evil with his robot buddy from another dimension, Gold Lightan. While stuck on Earth, Gold Lightan assumes the form as a lighter. You know, to blend in. Apparently, every 5th grader in Japan in 1981 was a smoker, so nobody would notice Hiro carrying a solid gold lighter to school each day. 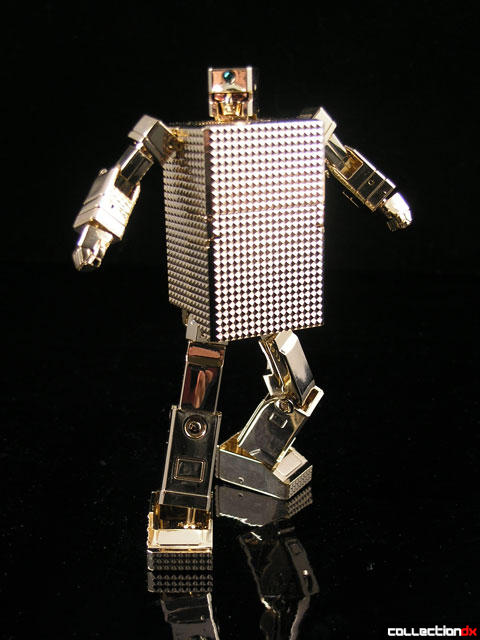 I'm pretty sure the Gold Lightan TV series was another one of those "lets come up with a cool toy first" shows, where it was basically a toy commercial. There were several Gold Lightan Chogokin toys made by Popy, all which transformed into some real-life item, such as a lighter, a coin holder, or a magnifying glass. Unfortunately, Gold Lightan didn't actually light.

The initial toys sold well, but the character went without toys until 2004, when a Hong-Kong based toy maker called Hung Hing came out with a NEW Gold Lightan Toy. This toy was bigger, better and loaded with metal. It was even licensed!

One can't help but wonder if Bandai's Soul of Chogokin Gold Lightan is an answer to that toy. As if Bandai was saying: "Oh yeah? We can do better!"

I initially wasn't going to get this toy. I have no love for the design of the character, and although I am attracted to the idea of selling lighters to little kids, I just couldn't commit to getting one.

I have to admit, this is a very cool toy. Every little detail about this toy screams luxury. I don't know if I should display it with my other SOC's or in my wife's jewelry box. Let's start with the packaging.

I was surprised at how small the Gold Lightan's box was. Opening it up you will find a black embossed box, and a few clear trays with accessories. Opening the black box reveals Gold Lightan, sleeping in a pillow of red cushioning. It looks like it was purchased at a jewelry store. Even the inside of the box lid is lined with a plush black padding. Also included in the box is the stand and instructions. One nice thing about the instructions is that along with transformation instructions, they also give a pictorial retrospective of the vintage Gold Lightan toys, and even a glimpse of toys that never got produced. let's hope Bandai continues to do this in the future. 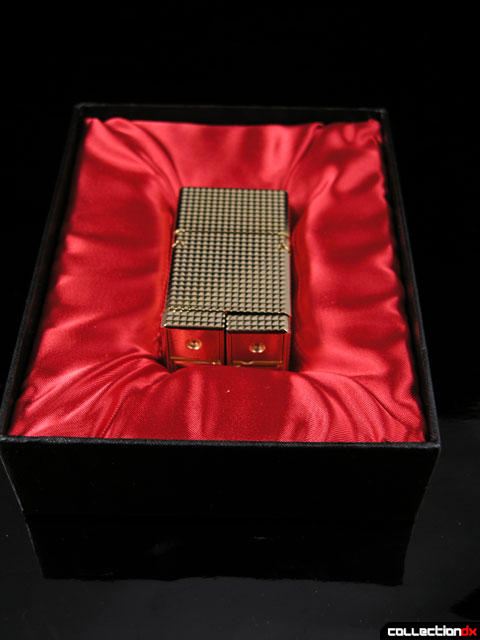 Gold Lightan in Lighter form is only about 2.25 inches tall. It's solid metal with a crystal-cut surface. The entire toy is plated in 18K gold. That's right; Gold Lightan is actually gold-plated.

Transforming Gold Lightan is relatively easy, but it is important to note that it is not a perfect transformation. There is some parts swapping involved. Starting from block form, you have to fold down the top panel. This reveals the head and arm sections. Fold the head up and then fold the arms up and then out. If this is your first time transforming Gold Lightan, notice that there are no hands. Close the top section then open up the bottom section and pull the legs down and out. There is a small flap inside the bottom section - pull that down then close the whole section. Finally pull the feet down until then click out of the leg. In robot mode, Lightan is about 5.5 inches tall (Contrary to the 6" on the video review, sorry!)

To add the hands, there are two gold wrist pieces that lock the wrist pegs in place, and then you can pop on any of the three sets of hands (fist, open and karate-chop). 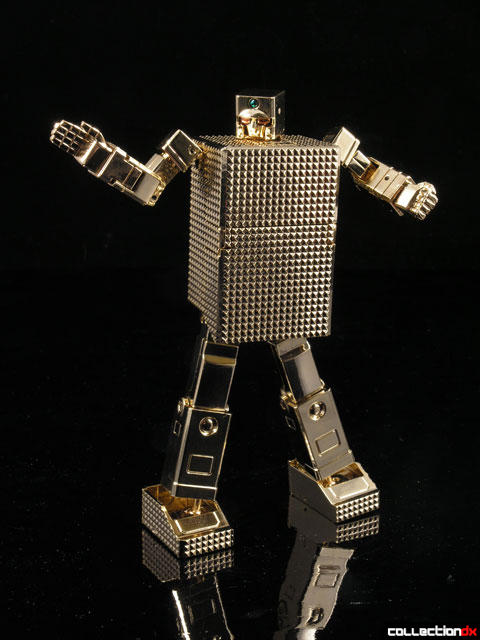 The hands are kind of a pain to get on, due to the gold being slippery. The other part that you may want is the two panels for the back of the legs. While these are not necessary, they do add a lot to the look of Gold Lightan. In addition to those accessories, Gold Lightan also includes a small mechanical part - probably a remnant of a fallen enemy. 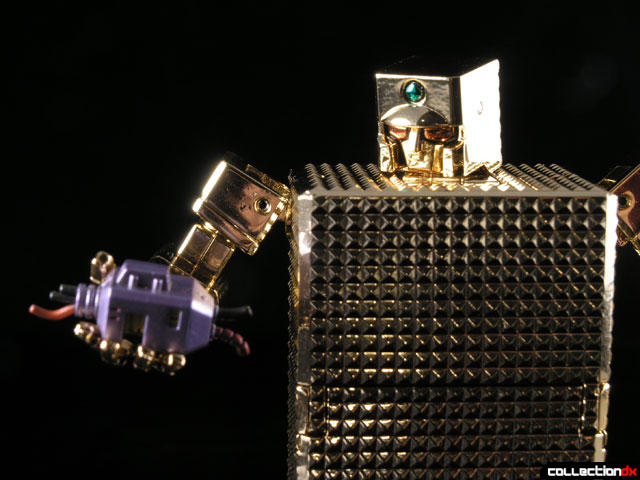 Once assembled, Gold Lightan is very well articulated. I count 17 points of articulation in all. Posing him can be a bit tricky due to the mass of the upper body. When the feet are extended all the way, the small posts don't offer a lot of support, but if you are diligent, you can pull off almost any pose. 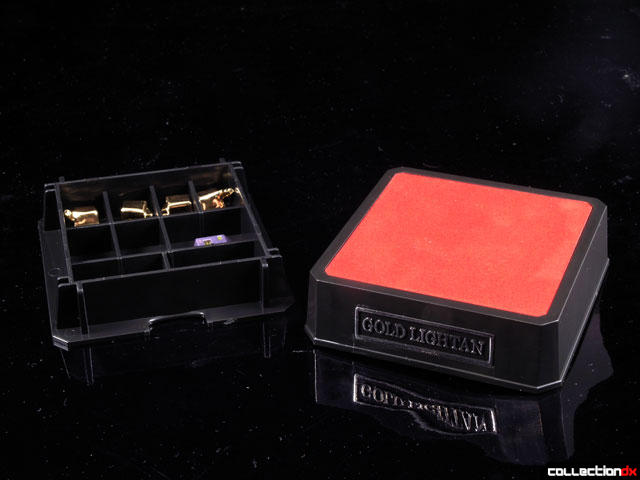 Bandai has set a new high with the stand for the Gold Lightan. We get an engraved nameplate, red velvet top and the base lifts up to reveal storage compartments for all the accessories! Hallelujah! 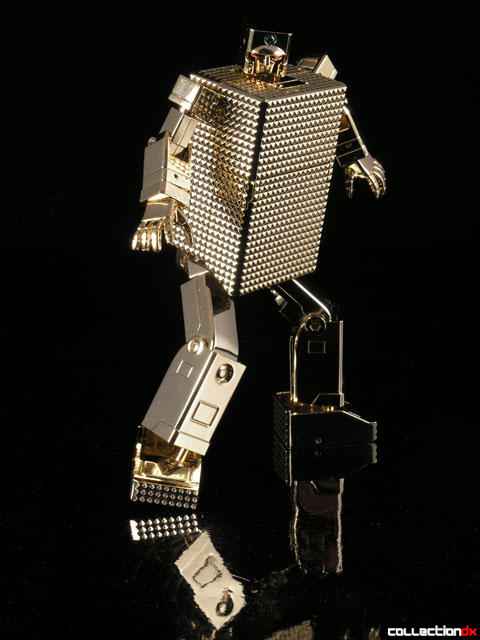 I really like this toy a lot. It's fun to fiddle with, looks great, and its a solid metal gold plated transforming robot. If I had to nitpick and point out a few things, I would mention that it's not a perfect transformation, it's a little top-heavy, and a little small. I understand the size though - they wanted the lighter form to be about the size of an actual lighter. 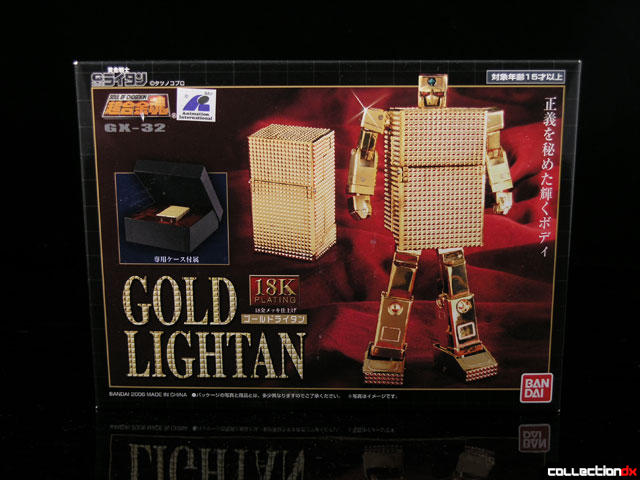 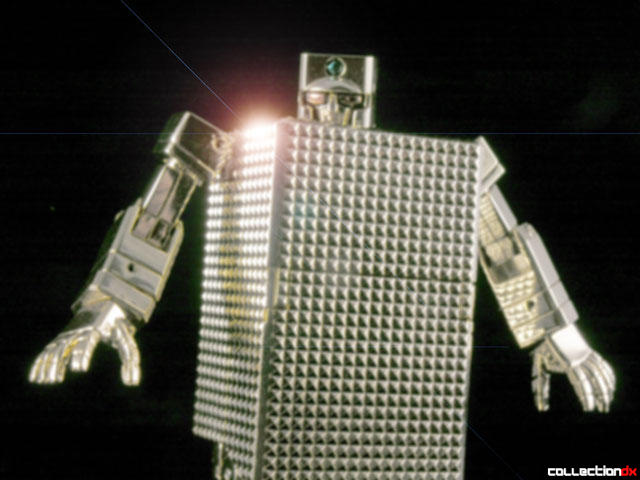 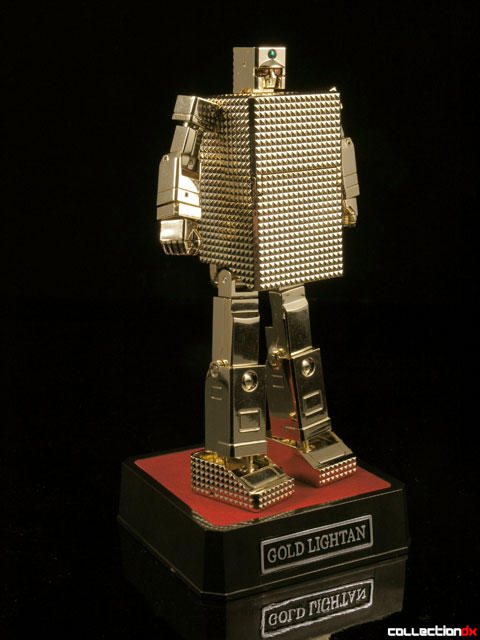 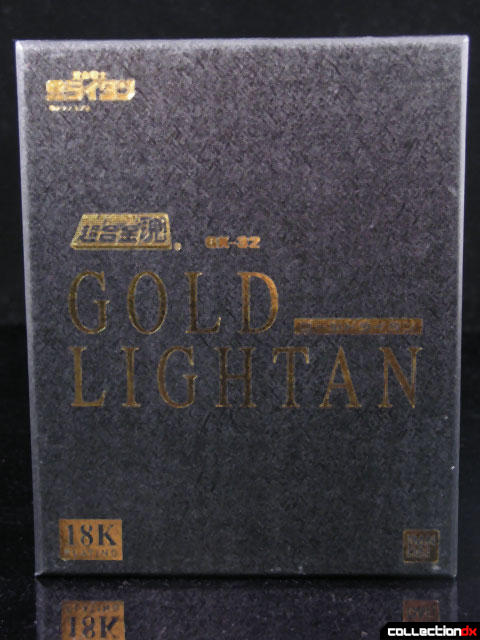 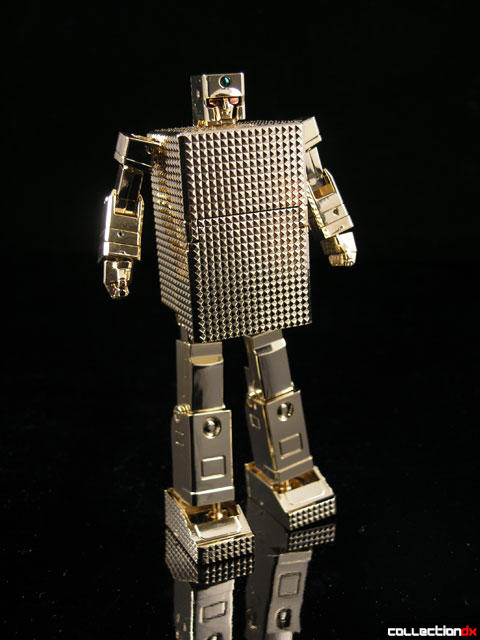 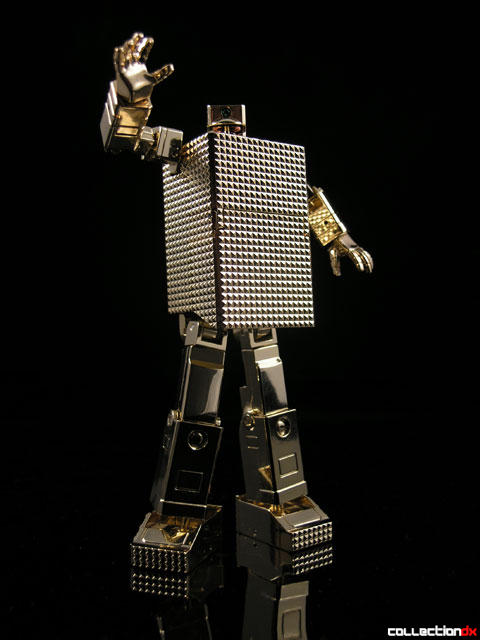 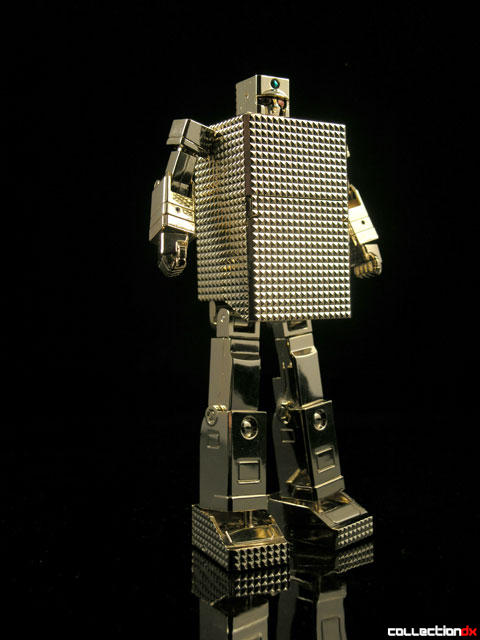 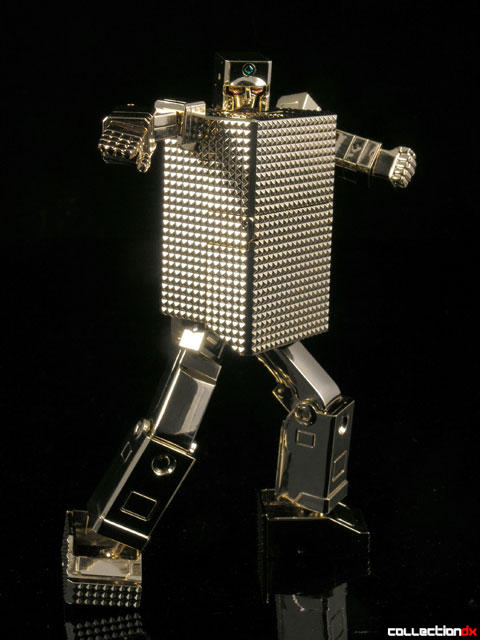 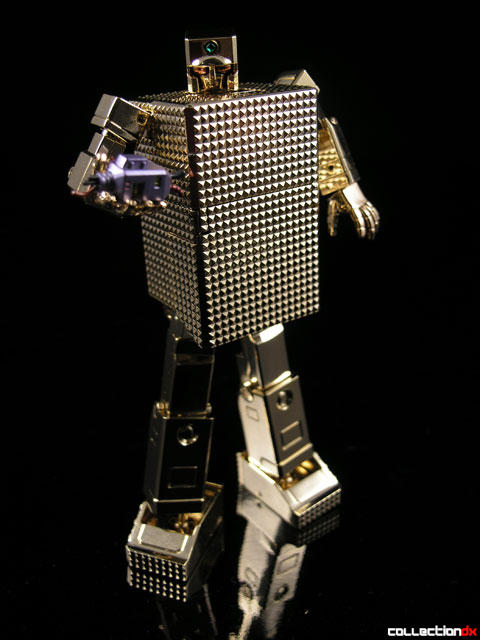 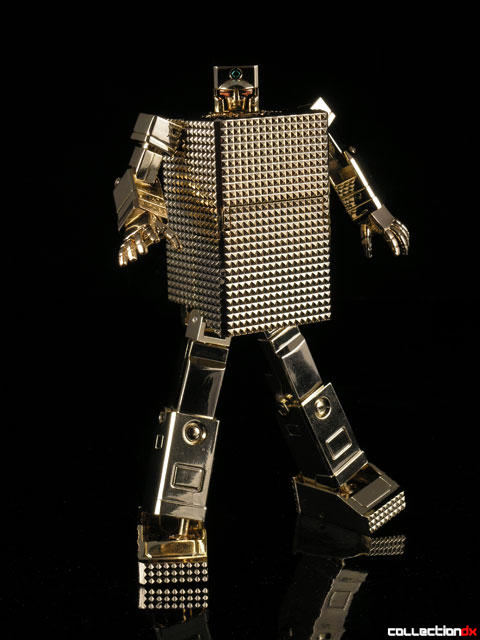 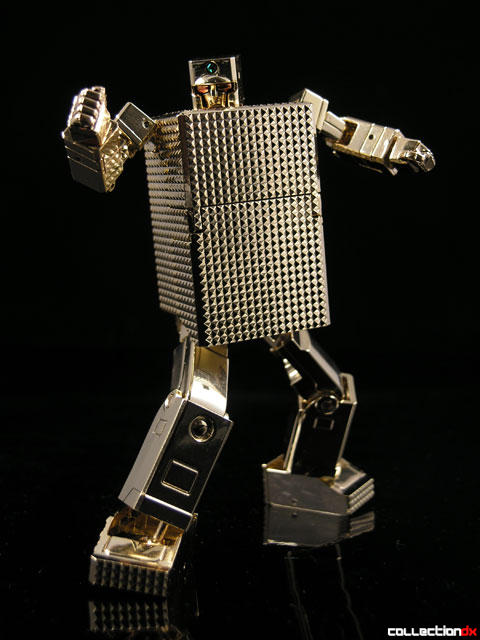 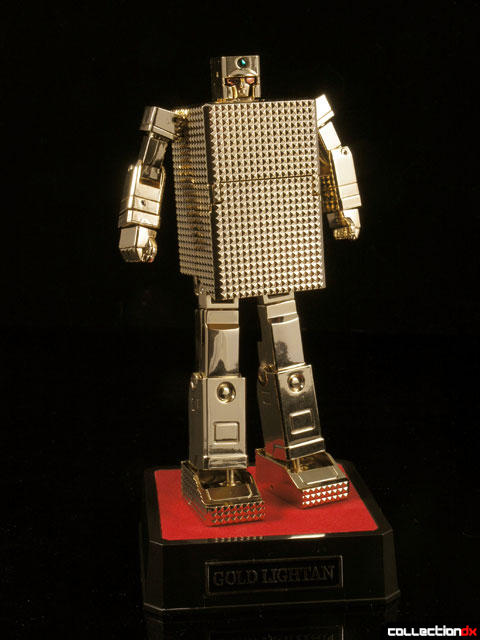 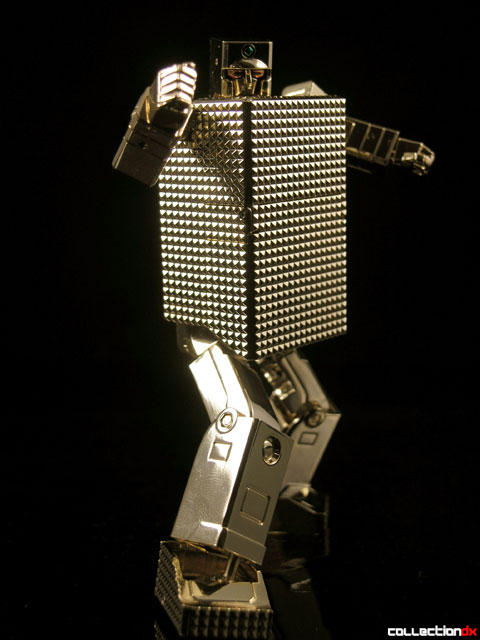 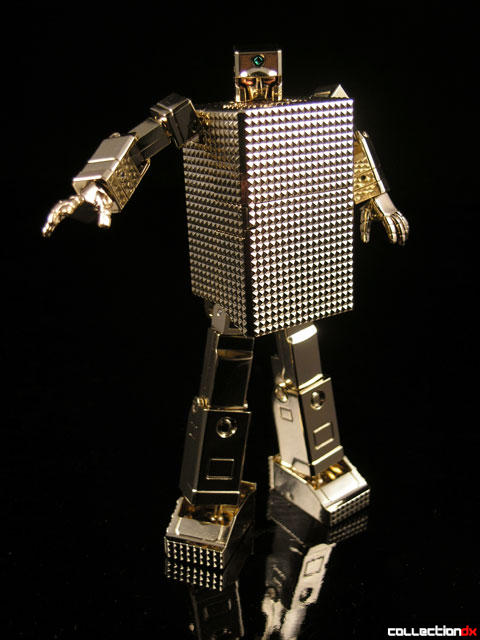 Yesss,oh yesss is this the gold of PURE AWESOMENESS? Yes it is!

Whoa! I should've been paying more attention to the reviews in this site, didn't think someone would actually review this guy given the lack of knowledge here in the states. I still remember watching this cartoon in Hong Kong when I was a kid and even though at the time the idea of a kid owning a lighter in school sounds like a crazy idea these days, I still remember every one of my school mates in HK carrying a plastic rendition of this guy and his buddies to school each to battle it out on the school bus. That's right in our little uniforms and ridiculously heavy backpacks cause you know schools in Asia actually pushes kids at the age of four with actual homework.

Needless to say this all changed when I moved here to the states and lost all of my early childhood exposure to Giant robo mecha battles on tv. Nonetheless, this guy has always remained as a reminder of my early childhood days of loving giant robots destroying evildoers at ridiculous scales.

Oh the things we once exposed to when the world was a simpler place.

Thanks for doing this review, and damn you at the same time, now I need to go find this bugger.