Aquaman may not have been the first Jumbo to show up from Mexico, but when it first appeared about 5 years ago, it signalled the start of a new wave of discoveries from south of the border that continues on even now. This toy is based on the Popy Kamen Rider X Jumbo Machinder. It was initially sold mostly under that name and it would be quite some time until it was discovered what the toys name actually was, or the name of the company that released it.

The toy was made in Mexico and released by a company called Jugarama. Although it was initially thought to be just a true bootleg, it was actually licensed by Bandai/Popy. They used the same mold, but changed the character's name to "Aquaman". I thought this was quite silly at the time, but later found out that the Kamen Rider X character was designed to be an underwater specialist so it actually makes sense. 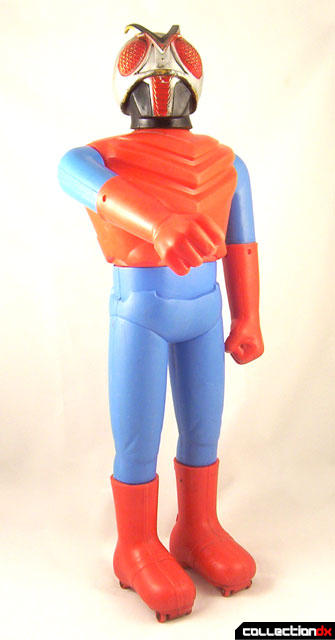 Although Aquaman uses the same mold as Kamen Rider X, there are differences between the two toys. Aquaman is about 1.5 inches shorter. The blue polyethylene is darker and the paint on the soft vinyl head has been changed. The orange on the head of Kamen Rider X has been changed to red on Aquaman and the blue in between the eyes has been dropped entirely. The fists have been changed from black to red. Although most specimens of Aquaman no longer have it, the belt was included. It was also advertised as having the whips, but I've never seen them. 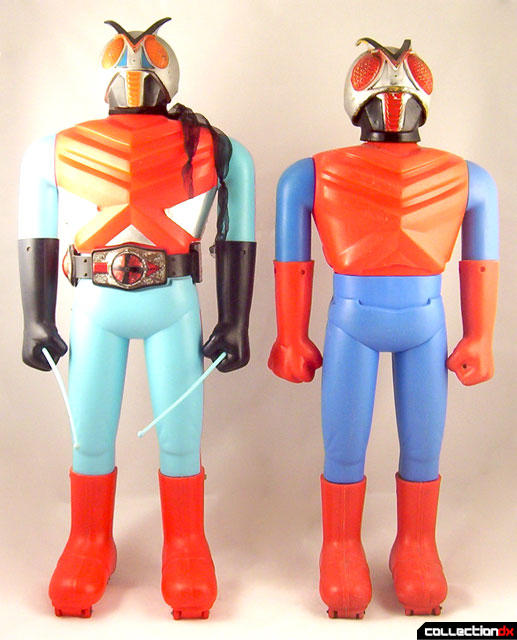 Jugarama released at least four known Jumbos. Besides Aquaman, there was Geta 1 (Getter 1), Goro Goro (Getter Poseiden) and Ultraman (Raydeen). The boxes for each of these toys are notoriously hard to find. Only one specimen of each of Aquaman, Geta 1 and Goro Goro are known to exist and the Aquaman one is nearly destroyed. In fact, the dealer who found it for me seemed to think it wasn't even worth buying, but I wanted to at least see it so much that I kept asking him to get it for me. I paid $40 for it and though that may seem like alot for something in that condition, I felt it was worth it at least in the interest of "jumbo scholarship". What makes these boxes so interesting is that they all have artwork designed to mimic the photos that were on the original Popy boxes!

The side of the Aquaman box features images that suggest that Jugarama also released items based on several Popy Jumbo Machinder accessories. In particular, the XX-1 Rocket Punch fists, the XX-11 transport and the XX-12 stop watch. (Please excuse the poor images, as I said, this box is nearly ruined!) 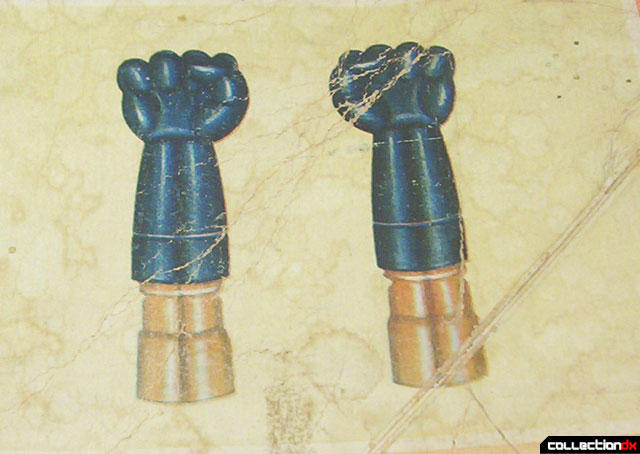 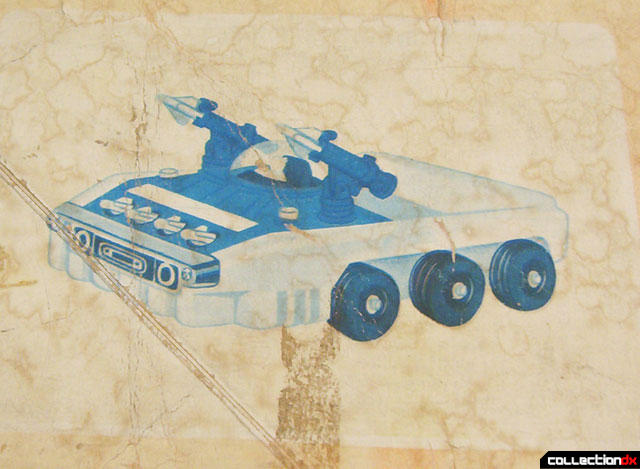 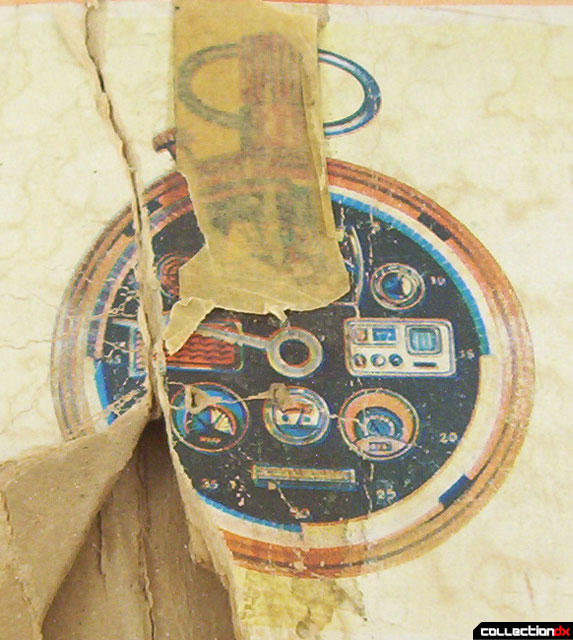 I've never actually seen any of these items for sale. (The only Jugarama accessory I've ever seen is based on the XX-3 Missiles launcher. I believe this was included with the Geta 1 toy.)

Aquaman isn't exactly easy to find but he does show up from time to time, moreso than any of the other Jugarama Jumbos. It is often missing the belt and other accessories, and it is not uncommon to see it with the wrong fists. However, it's nearly impossible to get boxed. 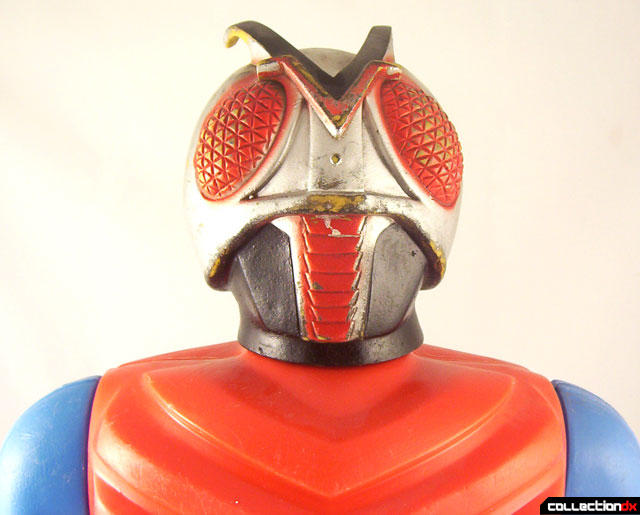 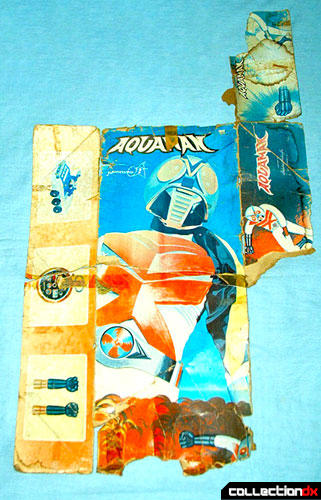 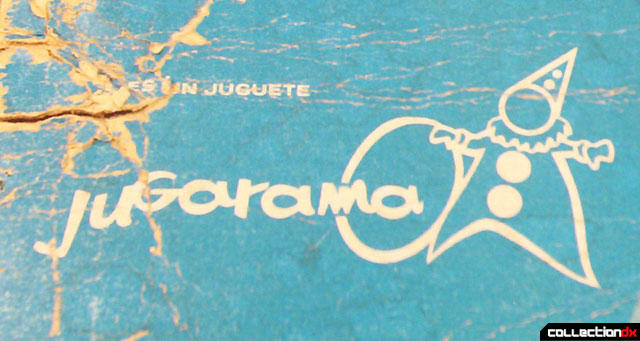 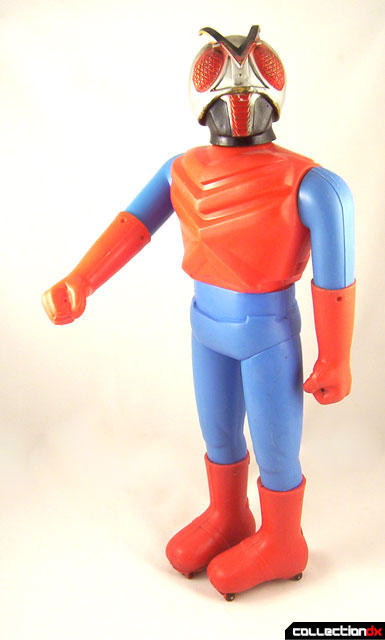