Lead Exo-Force technician and part-time Battle Machine pilot Ryo struggled to find some kind- any kind- of defense against the robots’ flying Sonic Phantom. First he tried a fixed retractable turret built into the side of Sentai Mountain’s huge vertical chasm. The disadvantage to a fixed emplacement is its permanently limited angle of fire, and lack of natural cover. Plus, once a turret was destroyed, it took more effort & resources to remove the old one and then build a new one in its place. Ryo next considered a customized Battle Machine made from scratch. Unfortunately, computer tests & simulations showed that the radar profile of a full-sized, heavily-armed Battle Machine would draw too much attention from other robots, and that would render it so much scrap metal before the Sonic Phantom even appeared. So, what was needed was a mobile platform that could avoid attracting unwanted attention; take advantage of terrain as both natural barrier and camouflage; be able to defend itself and surrounding human structures; and still have enough dedicated firepower leftover to pop-up and take on the robots’ elusive quad-nuclear powered screaming demon from the skies. The result of this is the Exo-Force’s Mobile Defense Tank- an all-terrain mass of missiles, laser autocannons, and fast-acquiring targeting sensors. Since the MDT would have to move across the humans’ base quickly, it is equipped with four separate tank treads on independent suspension systems. The suspension gear also has a jacking mechanism that allows it to hide behind rises in the land, and then pop-up & shoot from a covered position. To deal with the Sonic Phantom directly, the MDT employs a six-barrel heavy laser autocannon, a prototype disc launcher, and an independent targeting sensor package- all just on a pivoting turret above the vehicle. There are ten long-range infrared-guided missiles mounted on a pair of launchers that can swivel to match the turret’s orientation. When not piloting his smaller custom Uplink Battle Machine, Ryo mans the turret himself. Since the job of tactical command and movement are a little too much for one person to handle, the MDT employs a second occupant in the more heavily armored main body to drive the vehicle. The driver also has a pair of fixed ‘regular’ heavy laser cannons, and can control the missile racks as well. To help reduce the heat emissions from its own generator, the Mobile Defense Tank has a pair of large intakes that gulps cool mountain air to use as a light coolant for the engines, and then vents it out through two mufflers out the back of the chassis along with the spent fuel. 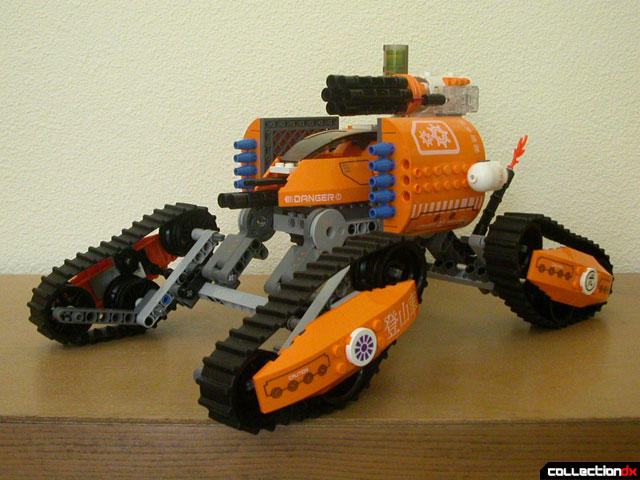 Despite not being a Battle Machine, the Mobile Defense Tank (back) is much larger and heavier- with 365 pieces in the set. The first thing that sticks out is the four tractor tread assemblies. Each has three black wheels and one rubber belt tread, and they are mounted in pairs to a framework that has joints that snap tightly at every few degrees. The back and front frames can snap up & down apart from each other, but the individual treads cannot move independently. With this, the MDT can either have a low profile for hiding, a normal profile for moving around and climbing, or a tall profile when aiming from behind a wall or rock formation. The two exhaust pipes on the back are mounted to the rear tread framework, but can rotate up and down as you like. On the main body, the cockpit can open up to reveal the pilot minifig. The two large missile launcher pods are mounted on the back by a single ball-&-socket joint each, and have a wide range to turnabout. And finally, the top-mounted turret. A Ryo minifig graces this position, sitting on top of the (non-rotating) six-barrel heavy laser autocannon and the newly-designed disc launcher. 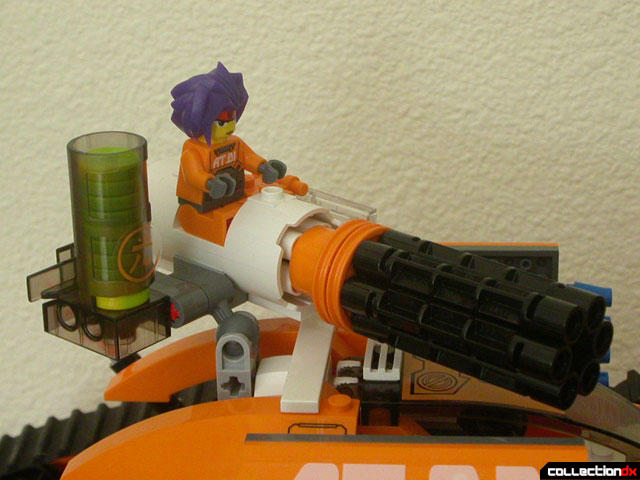 In addition to being large and poseable, the Mobile Defense Tank is one of the “Exo-Force” sets that use the newly-developed Lego light brick- a transparent 2 x 4 brick that has a small red light emitting diode (LED), a small, enclosed, self-contained battery, and a small trigger blended into the top. While the light brick can be snapped onto things, it has no studs of its own so nothing can be snapped on top of it or else the trigger couldn’t be accessed. The light brick on the Mobile Defense Tank set is activated when the trigger is pressed on the light brick itself. This activates the brick’s battery & LED. When this happens: 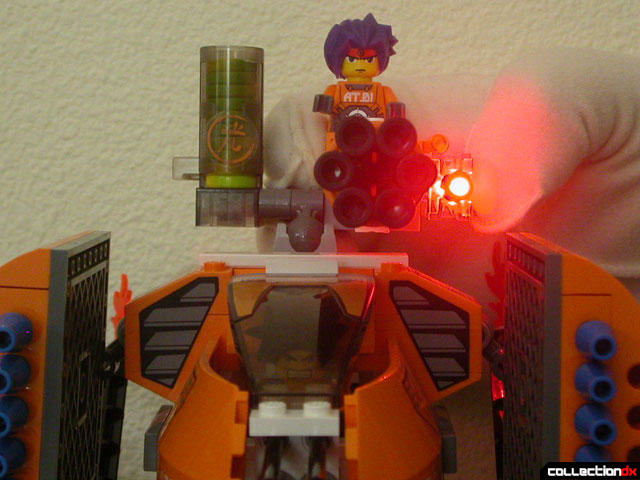 Lego Set #7706 also comes with the Ryo minifig and pilot minifigs that both have two separate facial expressions (one painted on either side of his head). Ryo has the same purple spiky hairdo piece, and the new pilot minifig has a black one styled like the one used for the Hikaru minifig; both were introduced in the “Exo-Force” line, which adds to the Japanese anime style of the series. When the head and hair are flipped around, both Ryo and the pilot either displays a determined face, or a battle-cry expression. (This double-face design is similar to some of the LEGO “Spider-man” minifigs from 2001 and 2003.) I should note that while Ryo retains his blue eyes and red bandana, the pilot uses the Takeshi minifig’s facial features but with purple eyes instead. 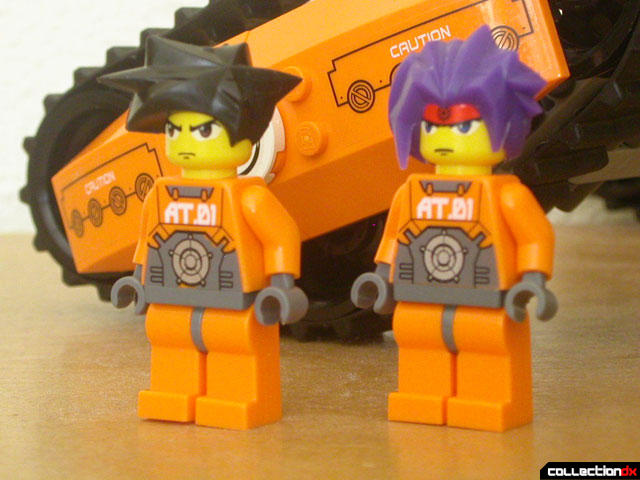 Normally, when a Lego set needs specific details on a part, such as a control panel or flag, the image is printed or painted directly onto specific parts. However, the “Exo-Force” line breaks that mold by using stick-on decals; something that was rarely ever used in the past. There is a small sticker sheet which provides allegiance markings, warning symbols & notices, and names- some of them written in Japanese text! Translations of the Japanese text are given on the sticker sheet, but do not go on the parts. This serves to allow for a wider range of piece marking without Lego having to create a completely different piece each time, and merges the “Exo-Force” and Japanese toy influence closer together. It does, however, have a small downside- because of the design of the decals, some of them cover places where other Lego pieces can go, which limits how a decal-applied piece can be used or taken apart. There are three conflicts with Set #7706:

In addition to building the standard Battle Machine, the official Lego “Exo-Force” website (http://exoforce.lego.com/default.aspx) shows how the same pieces can be rearranged into an alternate tractor tread-driven Advance Tactical Unit Battle Machine; found in the Online Building section of the site, and pictured on the back of the set’s box. (I haven’t built it myself yet, so I can’t give details on the alternate model.) So far, there is no indication that it will be able to officially merge with another set, but I’m sure MOC-ists [My Own Creation] won’t let that stop them from trying.

Okay, there’s all the praise and all the info. Here’s a few complaints: 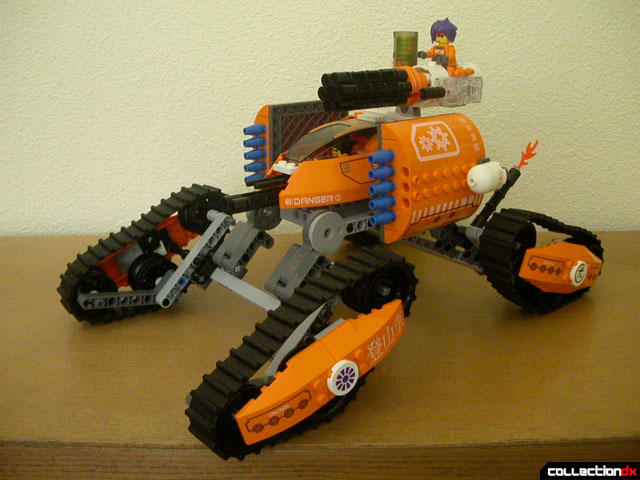 The Mobile Defense Tank is cool looking, and its flaws actually balance out with the good stuff, so it becomes a so-so set; good ideas, but some head-scratching mixed in. I will still recommend it. It is worth it.