NEW YORK, Sept. 2016 /PRNewswire/ -- In support of Childhood Cancer Awareness Month this September, IAmElemental, creator of the first female action figures designed specifically for children, is bringing its superheroes to the fight against pediatric cancer.  The company's popular Courage Core Power female action figures – modeled on Joan of Arc and embodying Bravery, Energy, Honesty, Industry, Enthusiasm, Persistence and Fear – are being deployed to comfort and inspire children and their families affected by these devastating diseases. 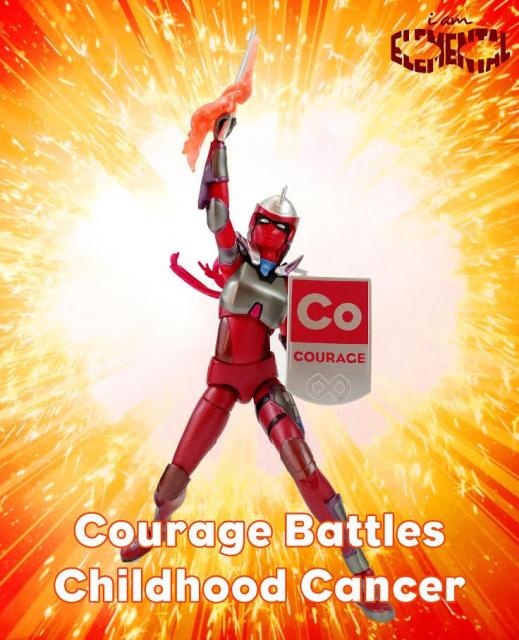 During September, IAmElemental is conducting a Buy One, Donate One program for every Courage Core Power female action figure purchased in the company's online store at http://shop.iamelemental.com.  The company will distribute one figure to a child affected by cancer for each figure purchased.  The 6.5" Core Power female action figure, which retails for $24.99, is a fusion of all Elements in Series 1/Courage.  She features more than 30 points of articulation and includes removable accessories including a helmet, armor, flaming Energy sword and Courage shield. "Like so much in the IAmElemental universe, our association with childhood cancer comes from our close relationship with our customers," said Chief Elemental Officer Julie Kerwin.  "Fourteen-year-old Anna Bosma of Harbor Springs, MI was an IAmElemental superfan – a collector of our Series 1/Courage female action figures who eagerly awaited the release of Series 2/Wisdom this fall. Upon learning from her grandmother that she was unlikely to see their release, we sent her an advance set of our newest figures.  Sadly, Anna succumbed this summer after a four-year fight.  Our Buy One, Donate One program honors her legacy, and her wish that IAmElemental figures be shared with others.  Anna understood - more than I could ever dream - about Courage and Superpowers and Character.   And it is Anna who continues, every day, to push us and inspire us.  We are so grateful to Anna's parents, Buck and Heidi Bosma, for allowing us to celebrate Anna's life this way, and for offering to work with us to bring Courage to children and families like theirs."IAmElemental's Series 2/Wisdom female action figures, with ancient Alexandrian STEM pioneer Hypatia as the muse, include Creativity, Ingenuity, Curiosity, Logic, Exploration, Mastery and Oblivion and are scheduled to ship in fall 2016. To participate in IAmElemental's Buy One, Donate One program, visit http://www.IAmElemental.com or call (800) 274-8282.About IAmElemental: New York City-based IAmElemental is a privately held toy company creating the first-ever female action figures designed specifically for girls (and boys!).  IAmElemental envisions kids as the creators of a play experience in which they are the active agents in a story of their own design.  Founded in 2013, the company launched Series 1/Courage via Kickstarter.  "If you give a girl a different toy, she will tell a different story"; "Play with power"; "It's character, not characters"; "Shared, everyone's powers grow stronger"; "We have superpowers. Want some?"; "Real heroes walk among us"; "Literacy is the ultimate superpower"; and "Wisdom Warriors" are trademarks of IAmElemental.