"Threezero enthusiastically introduces the first in a 1/6 th scale Titanfall figure collectible figure series with the IMC Battle Rifle Pilot. The 12” tall IMC Battle Rifle Pilot figure is a 1/6th scale version of the 6” figure that saw release with Threezero’s 1/12th scale Atlas collectible Titan figure. In Threezero fashion, the collectible is fully-articulated and highly-detailed with tailored fabric and armor pieces featuring strong detailed attention to the weathered metallic paint application of the character’s design. Pre-order for IMC Battle Rifle Pilot will begin on Wednesday, July 15 th 09:00am HKT (Previous day at 9:00pm EDT) at Threezero’s online store (http://www.threezerostore.com). The SRP for the figure is $190. Orders placed directly through Threezero's online store will include the Sidewinder, Anti-Titan Automatic Rocket Launcher exclusive accessory, in addition to the standard weapons. The 1/6th scale IMC Battle Rifle Pilot will also be available at a later date via select retailers.

Titan Pilots are rated by ‘certifications,’ most of which apply to civilian applications, such as construction, shipping, and heavy salvage industries. The most prestigious of these is the Full Combat Certification – a widely published series of tests that grade the Titan Pilot’s abilities. The Battle Rifle Pilot loadout is well-rounded with versatile primary weapons that make it a strong default Titan Pilot. The 1/6th scale Battle Rifle Pilot is a fully-articulated collectible figure standing 12” tall and featuring a highlydetailed IMC armor suit. The armor is constructed of cloth and plastic materials in order to replicate the pilot’s appearance in game with a detailed paint application replicating the armor’s weathered metallic design. The IMC Battle Rifle Pilot includes the R101C Carbine Assault Rifle, Smart Pistol MK5, Data Knife, and three pairs of hands with different positions for holding the accessories. Orders placed directly through the Threezero store will also include the bonus Anti-Titan Automatic Rocket Launcher Sidewinder exclusive accessory.

Titanfall is an award-winning, multiplayer first-person shooter developed by Respawn Entertainment and published by Electronic Arts that was released in March 2014. In this video game, players control pilots and their large mech-style "Titans" in team-objective based matches against other players. The pilots and Titans each have different classes that players can choose from as well as customizable weapon loadouts. After choosing their classes and multiplayer game mode, the agile pilots are dropped onto the map at the start of a match where they must achieve certain team objectives while competing against the opposing player team. The Titans can periodically be deployed during a match for use within the battle. 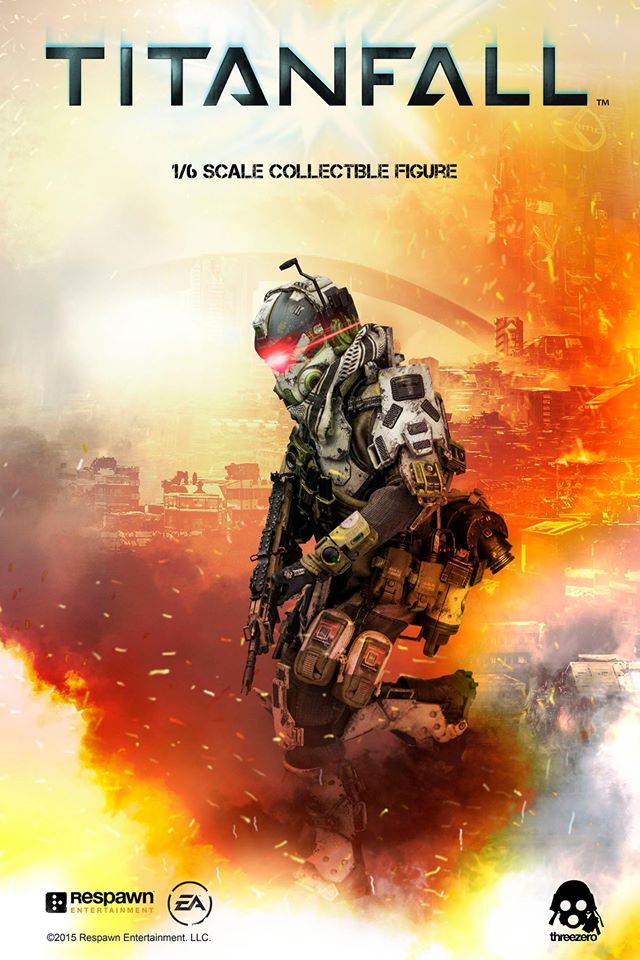