Godzilla Returns to the Bal Theatre!

Godzilla Returns to the Bal Theatre!And this time he's bringing some friends...

June 20, 2015 - San Leandro, CA;  Bay Area Film Events is bringing theKing of all Kaiju back to the Bal Theatre for their fourth annualGodzilla Night!This year features an expanded show with an extra, bonus matinee.First up at 3:00PM is a matinee of the film that kicked off GodzillaNight in 2012, the biggest monster battle of them all, KING KONG VS.GODZILLA. Along with the 1962 full-color classic, there will also beGodzilla clips and trailers.

The main show kicks off at 7:00PM (doors open at 6:00PM) with a minifilm fest based on the upcoming documentary KAIJU GAIDEN."Kaiju" is the Japanese word for "monster", meaning "strange beast"."Gaiden" is a Japanese word which means "outside story". It normallyrefers to a supplemental story or spin-off. KAIJU GAIDEN is thecontinuing story of the giant monster genre.

KAIJU GAIDEN is also the title of a documentary film bydirector/producer David Hall spotlighting various Japanese filmmakerswho have continued the tradition of tokusatsu (special effects) movies.It is part of the Independent Kaiju Project, an endeavor by producerMark Jaramillo to track down, catalog, and promote independently madekaiju films that have languished in obscurity.KAIJU GAIDEN is the first documentary which assemble various filmmakerswho have produced their own movies featuring gigantic monsters stompingcities and engaging in savage battle with one another. Although made atdifferent time periods, the directors still utilize traditional specialeffects techniques unique to the genre, sometimes supplemented withmodern technology. The directors will tell their respective stories oftheir love for the genre, their inspirations, and the issues involved inmaking a special effects film.Mark Jaramillo will be on hand to present some of the amazing shortsthat will make up the documentary, including GAMERA 4, GEHARA, WOLFMANVS. GODZILLA and others! This is the only place you will be able to seethese uncut, in their entirety! There will also be clips from some ofthe longer features. If you think you've seen every Japanese monstermovie ever made, think again and don't miss this!And if that wasn't monstrous enough, the co-feature is the absoluteclassic of Japanese monster cinema, the film that started it all, theoriginal GODZILLA, KING OF THE MONSTERS (1956). This version of theoriginal film has not been seen on Bay Area theater screens since BAFEshowed it in 2004 at the Castro Theatre for Godzillafest!Also back is the Great Godzilla Raffle and an amazing Art Contest thatwill allow audience members to vote for their favorite entries!All this, plus prizes and merchandise from BAFE's Kevin deAntonio, KaijuVinyl Legion's James Osborne and art by Gaz Gretsky! There are sure tobe other cool surprises as well.When Godzilla stomps into town, how can you not be there?Information and updates can be found at www.bayareafilmevents.com or onthe Bay Area Film Events Facebook page.Tickets for both shows are available at the Bal Theatre box office oronline at http://www.baltheatre.com 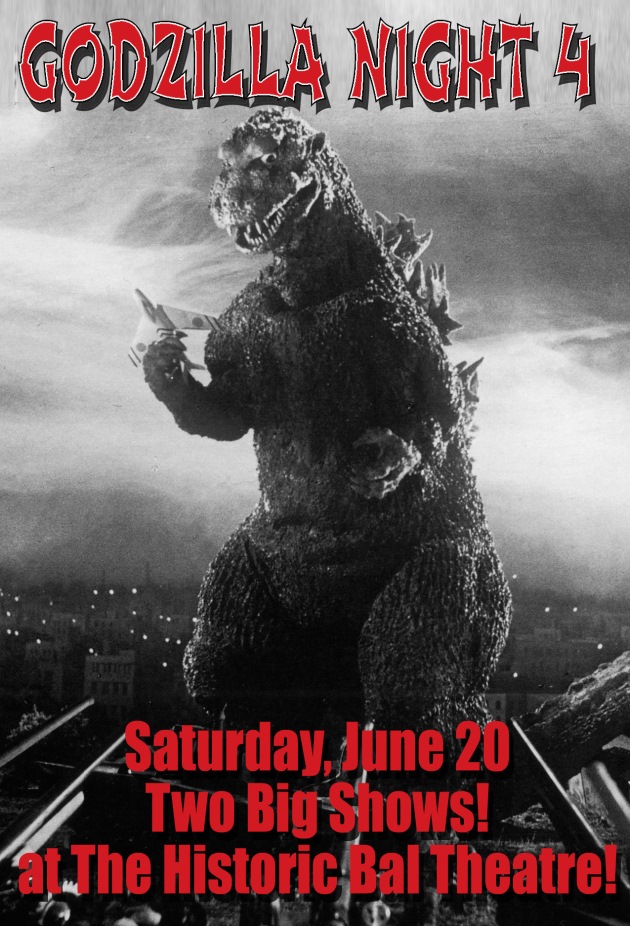