On the Super Robot Chogokin front, most of what was shown at Tamashii Features we knew about already. Still, Might Gaine was a new announcement. 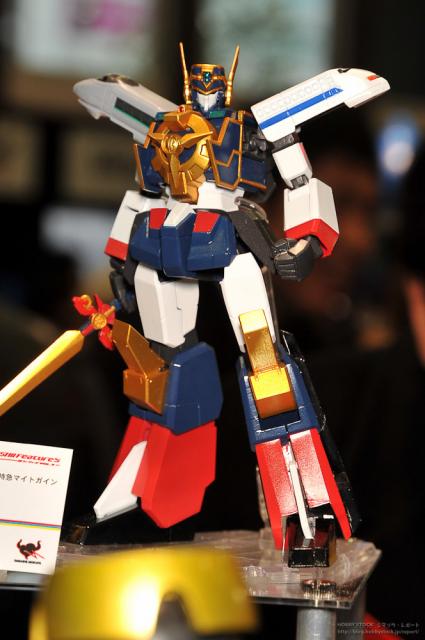 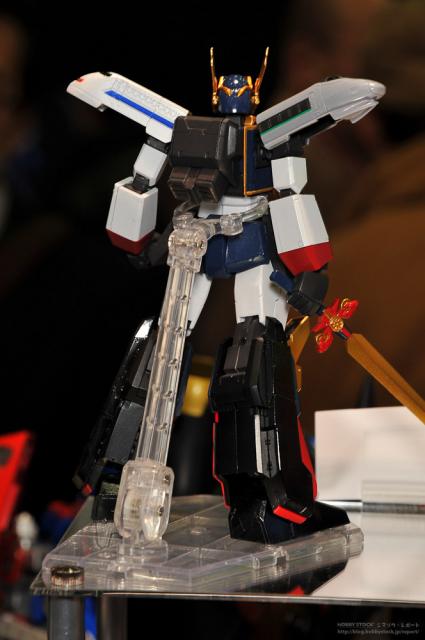 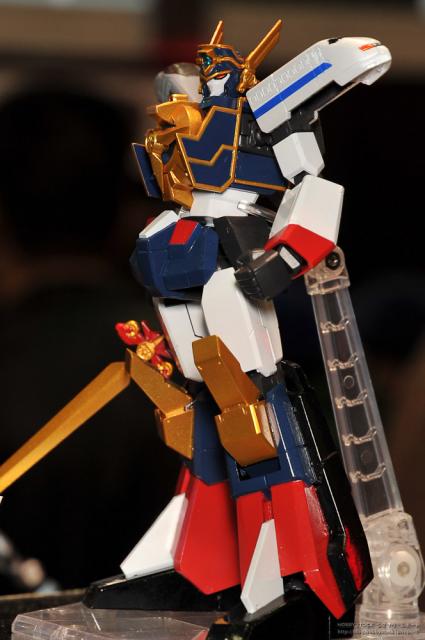 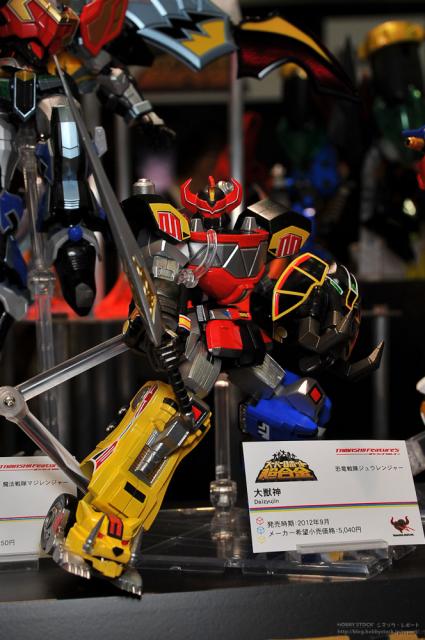 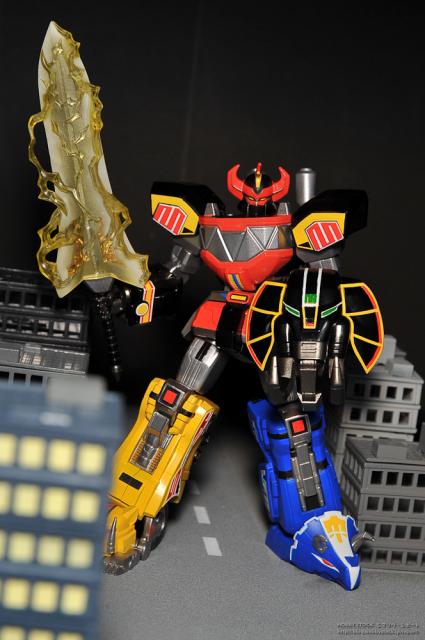 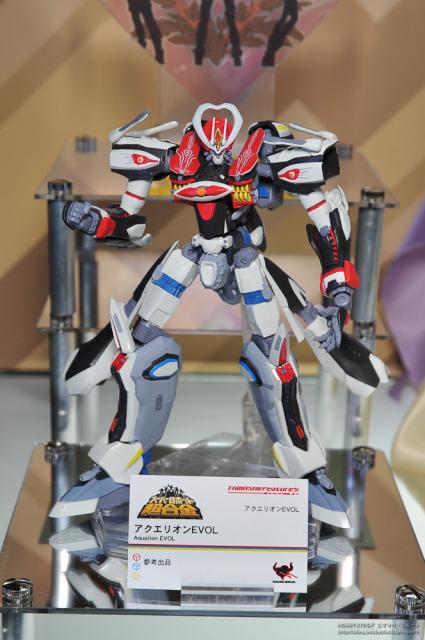 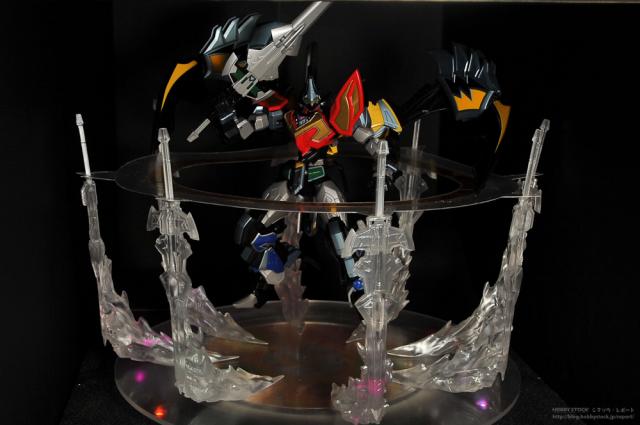 SRC ChoRyuJin and GekiRyuJin - with some sort of booster packs. 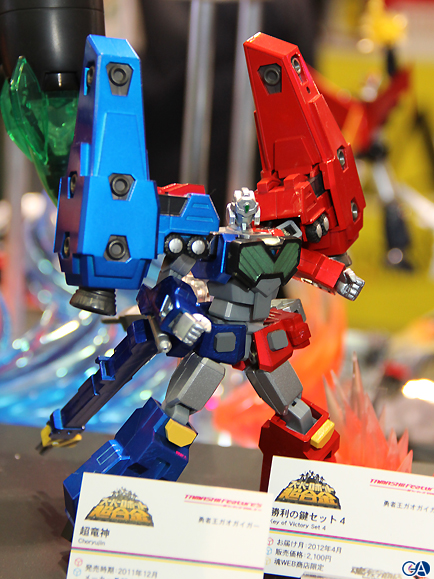 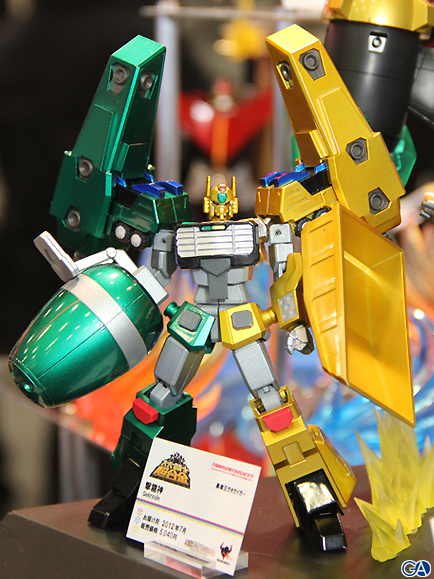 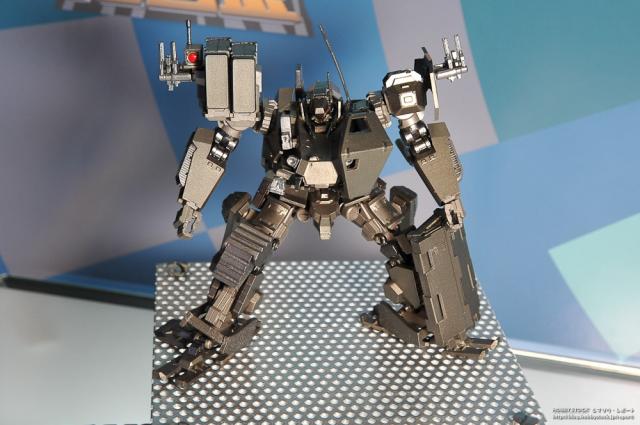 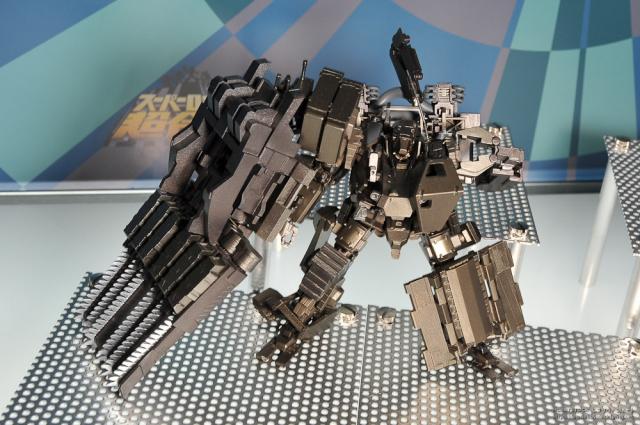 Finally, Tamashii Nations listed some possible candidates for upcoming releases in the SRC line. THIS MAY BE FAKE, but it's an interesting list...

8 comments posted
Is it just me...

Or does Magiking look ready to kick all his SRC Cousins to the curb?

Might Gaine looks perfectly servicable, but I can't help be wonder if his right shoulder will just be a recolor of GaoGaiGar's... from those images, the molding looks about the same.

DaiZyuZin's faceplate seems to be incorrectly/un colored, though I adore the sheer MASS of his sword.

Aquarion EVOL, at a glance, seems to be missing a lot of the mass and presense of the older Aquarion SOL.

As for the list of maybes... the GGG line seems to be doing okay for Bandai, so Genesic and/or GaoFighGar would probably be very safe investments for them (I'd buy 'em!). They ADORE Mazinger and SKL was an exclusive, so the fandom may be chomping at the bit for a wide release of Mazinkaiser, so another good one. With a new Super Robot Wars Original Generation game comeing out soonish, the Alt Eisen Reise, Rein Weissreitter or any other Banpresto Original would be an excellent tie in. An SRC Big O seems... POSSIBLE, but oddly timed with the SOC Big O not being that old (It was... what, a 2010, 2011 release?). God Gravion, while welcome, seems a bit out of left field... dunno WHAT to make of that one.

Super Robot Chogokin Gurren Lagann? The money mails itself. If Bandai has the rights (And the Ver. Ka toy hints they do) they would be fools not to jump on it. SRW Z2 part 2 is due out soon, ready to create a minot upsurge in demand for all the mecha involved... includeding Gurren Lagann. Produce it, Bandai, and we will BUY!

Many interesting releases here. Good to know Daizyuzin will come by September. I was worried it would end like Sun Vulcan Robo, Live Robo, Geki Tohja, etc, which were shown once or twice and disappeared.

What is really catching my attention is the possibility of having a SRC Mazinkaiser. As fas as I know, Bandai never released anything related to the original Mazinkaiser and, if this proves to be real, I'm sure it will open open doors to other Dynamic pro mechas. It would be awesome to have all of them in the SRC line, but, for now, let's take it patiently.

By the way, what's up with Bandai and Shin Getter and Mazinkaiser? I mean, these two are some of the most famous and loved super-robots, so why did Bandai never released a single toy of them? They may not have the license, sure, but, then, why this?

I ask myself that very question day in and day out my friend. Apparently, other companies do have the license for Mazinkaiser and Shin Getter robo. Which is strange since Bandai did all the other Mazingers and Getter robos, lets just hope someday they can workout the legal issues and make this dream of ours a reality. By the way, before buying my max factory Mazinkaiser i waited endlessly for Bandai to come up with a Soul of Chogokin, but seeing as theyr slowly shifting all their resources to the Super Robot Chogokin line, it looks as though they might not be interested in another SOC Mazinger. Still, back when the SRC Mazinkaiser SKL came out, they also promised to make the mass produced Mazinger Z from the SKL manga. Sadly, it looks like thats not happening either. Though if there's one thing I'd particularly like to see become a reality, its the Photon power lab mazinger base with the built in elevator they teased about for the SRC Mazingers. dare i call that that ULTIMATE base for any Mazinger collector.

Yeah, I agree with you guys on this. Grendizer too! We need one badly!!!

I think Bandai and Tamashii Bluefin folks forget just how huge Mazinkaiser is internationally, it's one of the few series you can actually legally buy in English, Spanish, and French on legit DVD.

Obviously everything Mazinger is mega popular here in spain but when the Mazinkaiser SKL is exclusive, and the SKL DVD actually does pretty well in the US and Europe, you're shooting yourselves in the foot. Both of the SRC Mazingers sell out almost instantly and are heavily ordered in the 2 big shops here in my small city with their own shelves. The smaller of the two carries the whole SRC line and they rarely last more than a week at most.

In just this country alone, how much free toy publicity was missed? First the SKL DVD released, a best-of classic Mazinger episode set, followed by a Neo Mazinger complete deluxe box set, then the Mazinkaiser movie got a reissue for Christmas, followed by a major national newpaper giveaway/promotion for Neo Mazinger going on all Spring... and I am not even mentioning the heavily run TV ads for both Mazinkaiser and Neo Mazinger from December to now. And that is just one little country over a 6-month period.

I know the mass produced Mazingers and the display base would do well. People would eat those up. I am dying for a cool way to display my SRCs.

So yeah, SRC Mazinkaiser and SRC Shin Getter... SRC Grendizer is a MUST MAKE!!!! Mass produced Mazingers and the Photon Lab Diorama... we need all of these. While I don't have any connection to some of the other names on that list it would be cool to see them all!

First off I want to know what that is around Magiking? An add on for it?

Of the possibles listed above the following are insta-buys!

God Gravion
Gurren Lagann (Even though I have a ton others I want it in SRC form. I love the line that much)
Grendizer
Mazinkaiser
Big O (plus Big Duo and Big Fau).

Also, if they do an Escaflowne figure I would pretty much freak right out.

It should be a separately-sold add-on, yes.

Preceding the ground Mahou Kiri finisher, they activate a magic spell called Phantom Illusion, where multiple copies of the King Calibur sword appear and fly through the air to immobilizing the enemy. The SFX accessory you see above is the first part of the Phantom Illusion where the copy King Caliburs rise up around MagiKinig before being flung forward.

Oh sweet. I love the show and did not even think about those things. Guess I should have