New York, (March 25th 2013) – Long Island is finally getting its own Comic Con. Frank Patz and EternalCollector.com have announced the first “Eternal Con” will be held Saturday, June 15th 2013 at the Cradle of Aviation Museum (on Museum Row along Charles Lindberg Boulevard) in Garden City, New York. 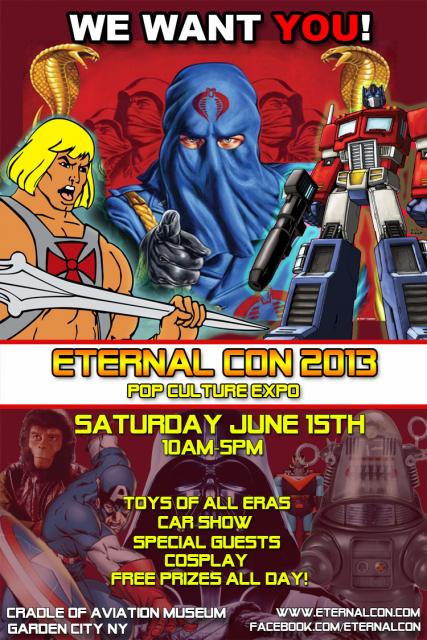 The debut show will feature top name guests, new and vintage toys, collectibles, costumes, an artist alley, a movie viewing room, and a special “Salute to G.I. Joe” including an awesome display of historic action figures.

Events throughout the day range from a vintage car show in the museum parking lot (including vehicles from the US Military, Movies, and Television) a costume contest, diorama contest, along with face painting and dog tags for children.

Attendees will have access to the entire spectacular Cradle of Aviation Museum, with stunning displays of the history of Aviation.

Attendees will also have the opportunity to win free prizes in hourly raffles.

“For too long, Long Island has lacked the excitement that only a comic-con can bring,” said Mr. Patz. “ETERNAL CON will feature an incredible selection of collectibles, posters, comic books, and other Pop Culture. When you have incredible collections exhibited next to vendors you get fantastic synergy – that’s what made EternalCollector.com such a hit when we launched – and that’s what will make ETERNAL CON a great show for vendors, the public, and collectors.”

Cradle of Aviation Museum, which includes ETERNAL CON, is $14.00 for Adults and $12.00 for children (2-12), seniors, volunteer firefighters, and military personnel. All fees collected from this event benefit the museum. ETERNAL CON runs from 10am to 5pm. Sponsorships are available.

EternalCollector.com was launched in 2004 by toy and memorabilia collector Frank Patz. The site showcased toy collections and other types of collectables in a way never seen before and quickly became a key destination spot on the World Wide Web. In 2011 Patz re-launched EternalCollector.com in support of the forth coming ETERNAL CON.