Super7 is set to begin accepting preorders for the Star Wars Stormtrooper Super Shogun in the manner of the original Star Wars collectibles: as part of a special "Early Bird" program. Preorders begin at 12:00pm Noon PST (3pm EST) this Friday February 26th at the website STARWARS.SUPER7STORE.COM.

"Early Birds" will receive the following benefits:
* FREE SHIPPING of the mammoth toy - a $30 savings! (This offer applies to continental US only.)
* An exclusive EARLY BIRD commemorative certificate
* Guaranteed to receive the STORMTROOPER SUPER SHOGUN itself before any other customer

The retail price is $299 , and is scheduled for release on Saturday May 29th. The Early Bird preorder benefits will be offered for a limited time only. 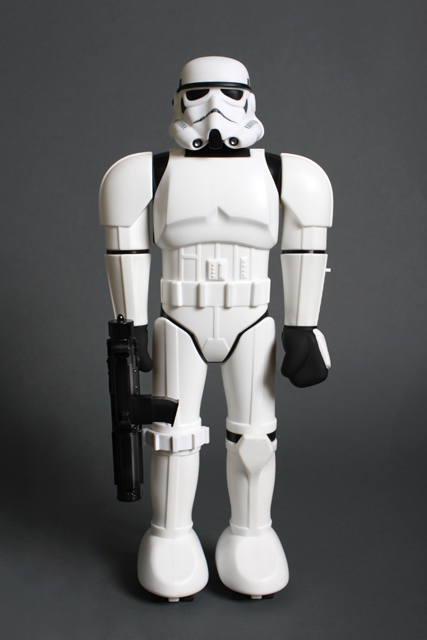 The Star Wars Stormtrooper Super Shogun stands a whopping 24 inches tall, and includes all of the features that you expect from an authentic Jumbo: free rotating wheels on the bottom of his feet, and a spring-loaded Rocket Punch firing fist.

Utilizing the same techniques implemented by Japanese toy manufacturers in the 1970s, the Super Shogun is constructed from durable, blow-molded polyethylene with a painted vinyl helmet. The figure is articulated at the neck and shoulders, and includes a removable, highly-detailed BlasTech E-11 laser blaster, which even features a posable stock that unfolds from below the barrel. This marks the first authentic Super Shogun produced in over twenty-five years. For more information, please visit the dedicated website STARWARS.SUPER7STORE.COM. 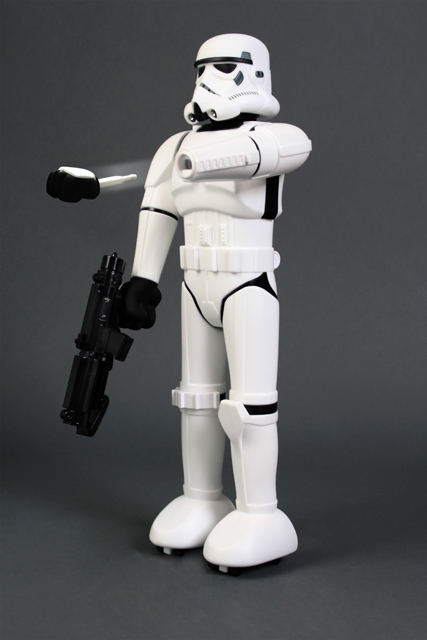 Founded in 2001 as a magazine devoted to the obsessive-compulsive world of Japanese toy collecting, Super7 embarked on a mission to become the premiere outlet for information and reference for the obscure oddities of the toy universe. The success of the magazine immediately led to Super7 collaborating with Japanese toy manufacturers to create exclusive toys and various special editions, evolving over time to Super7 designing and manufacturing its own collectible toys.

Super7's philosophy is to make products- toys, books, magazines, t-shirts, and even their own retail store in San Francisco- that its collector founders would want, resulting in Super7's products being recognized by fans as original, unique, and most of all, genuine.

5 comments posted
3pm EST.Well, I'll be on the

3pm EST.Well, I'll be on the road, so this will be funny to come back and see the pandemonium.
Dave, did you take the day off? Haha.

...to another three-page comments argument about whether it's a JUMBO or a STAR WARS TOY...

Are they collecting the cash now or when it ships? I'm really excited about this guy, but I'm wondering if I need to scrape the funding together right now or if I can relax a little.