In a packed room filled with TRANSFORMERS fans, Hasbro, Inc. (NASDAQ: HAS) officially unveiled details about TRANSFORMERS PRIME BEAST HUNTERS during a special panel at New York Comic Con on Thursday. BEAST HUNTERS will be the touchstone for TRANSFORMERS brand entertainment in 2013 driven by the award winning TRANSFORMERS PRIME animated series which is produced by Hasbro Studios, airs on The HUB television network in the U.S. (Fridays at 7 p.m. ET) and is seen by kids and fans in over 170 countries around the world. 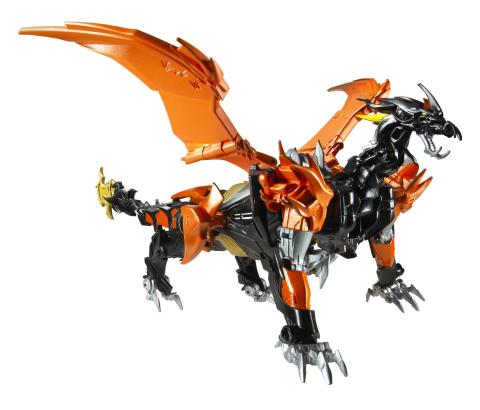 The beasts, comprised of a new TRANSFORMERS faction called the PREDACONS, are led by one of the most imposing and powerful characters in the TRANSFORMERS world – PREDAKING. At New York Comic Con, in addition to giving fans a sneak peek at PREDAKING in the animated series, Hasbro discussed how BEAST HUNTERS will be the driving force behind its product line including toys as well as an extensive licensing program.

“In recent years, TRANSFORMERS fans have seen the AUTOBOTS battle the DECEPTICONS,” said Aaron Archer, Vice President of TRANSFORMERS Brand Creative and Design. “The PREDACON faction, made up of menacing beasts that convert in ways mankind has never seen, have now joined the DECEPTICONS to take down the AUTOBOTS. We’re looking forward to exploring this new dynamic in the animation, action figures, KRE-O building sets, publishing and more.”

“BEAST HUNTERS is an exciting new direction for TRANSFORMERS brand entertainment and the introduction of the PREDACON faction is a pivotal moment for OPTIMUS PRIME and the heroic AUTOBOTS, impacting the world of TRANSFORMERS which will never be the same,” said Jay Duke, Global TRANSFORMERS Brand Vice President at Hasbro. “Kids and fans will be amazed by how Hasbro will bring this story and the ‘beasts’ to life across the brand’s major entertainment platforms in 2013.”

So basically, they're doing the same thing that Robots in Disguise did, only this time the Predacons are the subfacton and the Decepticons the main faction. Predaking has always been a combiner, a bit weird to see him as a stand alone toy. Does his beast mode remind anyone else of Cybertron Scourge?