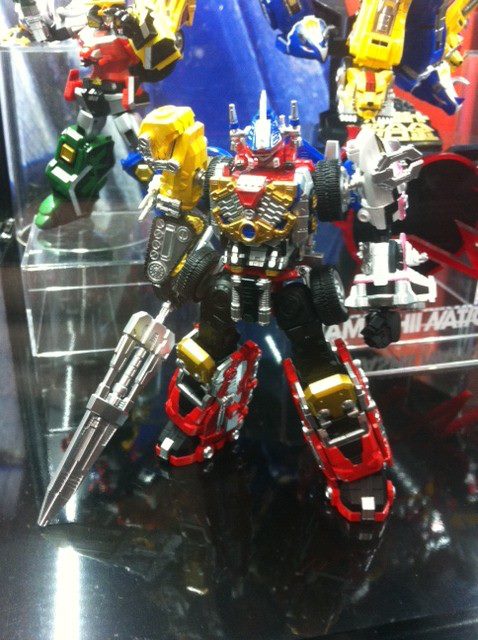 8 comments posted
What a coincidence: some days

What a coincidence: some days ago I was thinking about which Super Sentai Mecha would be the next to star in the SRC line.

Personally, I think Daibouken is a little ugly: the colors don't make a nice match and there's a lot going on on him, but I think it will end up being a nice SRC (like the other Super Sentai SRCs). It looks dynamic, while keeping a somewhat "blocky" look. I like it.

I've never had much beef with DaiBouken. It did pretty well by itself. Really it's when you start looking at the Gougou Vehicle line as a whole that DaiBouken reveals the cracks in its armor.

It looks nice. It REALLY does!

But I still wish it was an SRC DragonZord instead. :(

If they start making SRC secondary robos, I would also like to see Dragon Caesar.

I for one,got the model kit version of Daibouken which I'll be reviewing someday. I was joking about him not getting a SRC because the one I got which is a model kit of the DX version was ok because his articulation makes him look great but,Oh man. Did Bandai pull another Sentai mech outta their hats. I'm surprised. I'm gonna be gettin' this after I get Daizyujin and Might Gaine.

Oh,By the way,Daibouken looks like he has been molded by Hajime katoki,the gundam dude or Kunio Okawara or even Obari Masami because...Daibouken looks so human..could be Kanada stylized..dunno

From what I can tell based on the SRC sentai robots I do own, they don't want to go stylized, they just make allowences for superior articulation. Daiboken's arms may be extended to allow his elbows room but I put good odds that you can collapse them down to be more 'toy accurate' like with Shinkenoh.

They also seem to favor the designs as seen on screen with the suited actor, not the base DX toy, so that might be something else to consider.