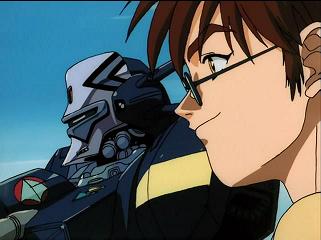 Everyone wants me to talk about Macross so let's go into the world we once dreamed of.

Speak of The Blue Angel,

I was just thinking about your show just now.

Speaking of timing It's showtime.

I saw this on that other board. It helps illustrate the odd concurrency of Macross 7 and Macross Plus.

So the VF-19 predates the first appearance of the YF-19. That's kind of funny, right?