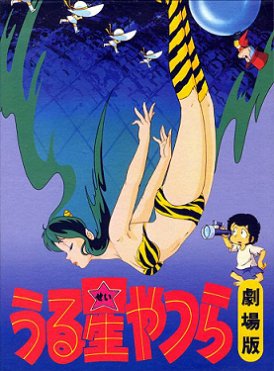 This is the first of a two part series on the second Urusei Yatsura movie.

This is about endless summers, infinite mirrors, mold covered apartments, and watching Godzilla films at a ruined drive-in theatre.

Click [HERE] to get stuck at school for weeks working on a Nazi cafe.

4 comments posted
It's better than movie 4

I'm one of those unfortunate souls who happens to have the AnimEigo movie box set, the one that is way too expensive and requires you to buy the CPM release of Beautiful Dreamer separately. C'mon, AnimEigo. Slim cases! This should be $45, tops!

Anyhoo, I basically watched the six movies back-to-back, which is not the best way to be introduced to the series. For example, Only You didn't really click with me until after I had seen most of the movies. Beautiful Dreamer was a little easier to digest, since it dealt more intimately with characters like Sakura, Onsen, Megane, and Mendo. In the movie Only You, these characters are kind of thrown at you with the expectation that you know who they are.

What's interesting about this movie is that, although Rumiko apparently didn't like this film, she handed the next two films over to Kazuo Yamazaki, who seems to have tried to do the exact same thing with Lum The Forever. Movie 4 is quite essoteric and very difficult to understand, and after having seen it a half dozen times or so, I still have a hard time figuring out what, exactly, is going on. Something about a tree being knocked down and how it somehow causes Lum to lose her powers...I don't know. It's only redeeming quality is that it sets up the fifth movie in a way, which was much better.

The sixth movie, though, is terrible.

Well, it's more like Oshii saved everyone's bacon by whipping together a movie in no time flat that turned out to be quite successful and then Takahashi had a hissy fit. Sick of her interference, he quit, and went on to do all kinds of weird avant garde crap like Angel's Egg instead of millions of UY sequels. I haven't actually watched any non-Oshii UY and it doesn't sounds like I should. Do you think any of the non-Oshii UY is great?

That's true. I was being rather delicate in how I had phrased that. I'm well aware of Rumiko's temper tantrum over this movie.

Well, I can't speak for the TV series, because I haven't seen ANY of the episodes from the latter half of the series that Oshii wasn't involved in. For the movies, though, I'd say that with the exception of the fifth movie, there isn't a lot there.

3: Remember My Love - The first of two Yamazaki movies, and the first of two movies with essentially the same plot! The opening song is AWFUL and totally 80s. Lum disappears, and it causes the world to become more "normal" (read: BORING). And there's a fox character that will make you say, "Oh, that's where Shippo came from!" Oh, and Ataru is turned into a Hippo, but there's no pay-off, except for Mendo calling him "Baka kaba". ...Yeah.

4: Lum The Forever - Ataru cuts down a tree, and it makes Lum lose her horns, which in turn makes her lose her powers. And then she DISAPPEARS! And the movie becomes not only boring but really, REALLY hard to understand. The world either turns into a dream world, or there's an alternate reality where the all the wacky effects that Lum caused are all gone. (i.e., the stormtroopers are interested in OTHER girls and Shinobu doesn't have super strength.) And then there's this huge battle between Mendo's family and that of Tobimaro, and Ataru puts on his 80s running shorts and goes jogging, but there's no explanation as to why any of this is happening. It's like a bad version of Beautiful Dreamer.

5: The Final Chapter - Literally the final chapter of the UY series. This is kind of like Only You, but in reverse. A suiter comes to claim Lum. Basically, Lum's grandfather made a deal in which he had to give away his first born girl to this prince of darkness. (No, not Ozzy. This prince comes from a planet that is literally shrouded in darkness.) So the prince comes, and he slips a ring onto Lum that makes her lose her horns, which in turn causes her horns to fall off. Without her horns, she has no powers, which is exactly what happened in the last movie. So, she gets kidnapped, and Ataru goes the rescue her. Wacky hijinks ensue. There's another deus ex machina moment involving giant mushrooms, and Ataru has to have another Oni tag game with Lum, which, if he loses, he and everyone on Earth will have their memories of Lum taken away. And then the movie (and the series) ends with...get this...NO RESOLUTION! In a Rumiko anime!?!?! No way! Get out!

6: Always My Darling - Basically, this movie isn't really connected to the chronology. It was released to commemorate the tenth anniversary of the series. Some alien princess kidnaps Ataru to find a love potion, which can only be found by the most lecherous person in the universe. Basically, there are NO characters in this movie. Whoever wrote this must have been working off of a one-sentence synopsis of each of the characters, because the characters act like caricatures of themselves. It's also about fifteen minutes shorter than the other films, and the animation kinda sucks, so it's more like a bad OVA than a movie. This is an awful, AWFUL film.

So, watch at your own discretion.

Beautiful Dreamer would be the first UY-anything I would see c/o SciFi Channel's showings of it, and in particular, I was taken into it's theme and questions about reality and dreams, let alone time and space. While I didn't really knew much about the characters before then, it slightly got me interested in hunting down a copy of the first volume of AnimEigo's UY TV series tapes to see how it all began, despite feeling like Jeremy about how those episodes work, but it gave me a better idea of these characters and what was going on.

Thinking rather off-topically for the moment, that scene where Sakura talks to Onsen at the restaurant with the camera that was panning between both of them reminded me of a similar deal that was done by American animation director Brad Bird in his "Family Dog" episode of the TV series Amazing Stories. Here's a link to that scene to show what I'm talking about (starts from 3:53 and goes on to 4:36), just sorta came to me at the moment.
http://www.youtube.com/watch?v=4GFz7zIpr9A