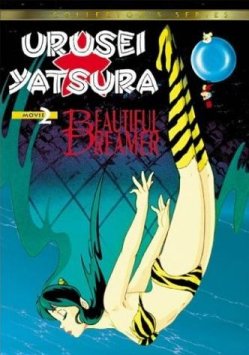 This is the second of a two part series on the second Urusei Yatsura movie.

This is about magic bugles, apocalypses, masochism, and polyamory.

I listened earlier, but I already don't remember if you mentioned this. What was the deal with the little Lum in the white dress and hat? I never quite got what that was about.

Probably the best way to figure it out (like I had)!

Interesting if the ending is meant to be a dream in itself though, as I didn't really noticed that before, thinking it was a regular day (and Mujaki taking on another line of work), but quite an interesting thought I hadn't noticed. Also quite an interesting way to put the title of the movie there too, as you sorta forget why it wasn't there in the beginning during the whole film, but I sorta liked how they build it up slightly with the way those guys were hoisting the sign up the building while being covered up, and then to reveal that sign at the end of the film like that.

And yes, that scene where the dreamworld gets destroyed was fantastic, and only wish it went on a tad longer (when SciFi would air this, they'd stick the break during the end of that before we see the multiple dreams Ataru has later, though they cut out the one that references that day when he had that competition to touch Lum's horns to save the earth).