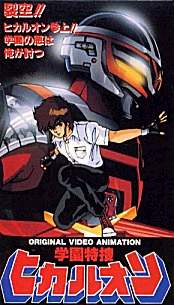 More after the cut.

You'd better be doing a damn VR Troopers episode next.

Because I'm sure as hell expecting one.

I've been thinking about it, but how do you think I should approach it? I don't have the entire series or anything and it seems kind of excessive to watch the whole thing anyway.

Haven't heard the podcast (probably won't since the topic doesn't interest me), but I just had to comment since I couldn't believe someone other than me knew about the existence of "VR Troopers". I watched, maybe, a handful of episodes out of two seasons of disjointed crap, and I got so little out of it other than some cool fighting scenes. The giant mecha were very strange by my "PR"-inspired standards at the time. Still are, now that I think of it... But at least I know why so much was so weird in that show.

Speaking of which, I never got to see "Superhuman Samurai Syber-Squad", but I got the three Dlx. transforming toys when they were first out. Any chance of covering that in a podcast? I can't seem to find any subbed episodes of the original "Gridman" from which it came from.
------------------------------
CollectionDX Staff

Ooh-ooh-ooh-ooh-! I just thought of another title you might want to investigate. it's one of those films where half the cast speak English, and the other half Japanese. Brenda Bakke- better known for her role in "Hot Shots: Part Deux" and several episodes of "American Gothic"- plays a central role here as a Texas Air Ranger.
I have a copy of the film on VHS, and know it almost inside-out, but it's all in the original Japanese, so I've never known what the story is about or what they're talking about in it. (I really want to get my hands on ADV Film's subbed widescreen-DVD.)

As far as I know, it did pretty badly in Japan, but I think it was based on a graphic novel of some kind. (It did so poorly in Japan that when it was subbed by ADV, the director of the film- Masato Harada- had his name removed, and inserted Alan Smithee in its place.) Anyways, the non-stop giant tank-robot action in the finale between GUNHED Unit #501 and the Aerobot was pretty awesome.
------------------------------
CollectionDX Staff

We probably won't do Gunhed since the Greatest Movie Ever podcast already did it.

I have the entire Gridman TV series actually, though it's never been fansubbed. I have a lot of the toys as well.

Saban put out a surprising amount of DVDs of it a while ago (Including "Dex's Crazy Bug Suit"/Mask Rider).
They could probably be found on Amazon Marketplace or something.

What- "Mystic Knight s of Tir Na Nog"(sp?)? Ehh- I tried it a few times, but I could never get hooked in it. With my new-found interest in the Kamen Rider franchise, I might have appreciated it more at that time, but for me PR was always the bigger draw because of the mecha.

I also remembered that other USentai (durr hurr) show with a real long title.
Something like Super Ultra Tattoo Teens from Malibu.

Anyway I did catch some of Superhuman Samurai Cyber Squad. Very odd show - the main character would henshin whilst the supporting characters all had vehicles that combined with him, oh and the battles all took place in a computer. It struck me as the cheap Power Rangers, which I believe was why it was only on UK TV at about 6am.

VR Troopers on the other hand was the show that we'd get once all the Power Rangers episodes were exhausted. It seemed like an alright show at the time (I was 10 so possibly not in a position to judge) but not as cool as Power Rangers with its bad ass evil 6th ranger story (again I was 10).

I think this'll end up as some podcast dedicated to all the toku Saban ruined in the mid-90's. If not, VR Troopers.

...and don't forget about "Saban's Masked Rider"! The original Japanese fighting footage showed promise, but after three episodes it was just too warped to be enjoyable.

I have two commercial VHS tapes of Saban's Masked Rider (first couple of episodes I guess) as well as all of the Dynaman that aired on USA, so we could probably review those.

Wow. I have never heard someone use the words F*** and S*** so much like that since the last time I talked to my brother! LMAO. Great show as always guys. I thought we had some agreement amongst writers here to avoid the excessive volume of vernacular terms? If this keeps up I'm gonna change my signature to:

The podcast is labeled as explicit - so they can do what they want really, within reason. Its the text that we have to keep clean.

Hey Rob, if you want to come on the podcast and swear about Gundam you're welcome. :)

Well I do have the face for radio, but my voice is something for the silent pictures. If I could do a Podcast of random typing noises with explosions and Gundam Sound Effects, that'd be awesome! But I'm good, Thanks!

They can say pretty much what they want to in the 'cast, so long as they label it with a Content Warning at the start and on the site itself.

But I agree with you, Rob_Braun- they do tend to curse a bit more that I like... which is why I usually don't listen.

Eva, so you comment on all these shows without even listening to them?

You should listen to the show if you're going to comment so much. It's pretty rude otherwise.

Are you aware that ANYONE even if they are not logged in at all can see your post that is supposedly on the admin forum, Eva?

So I just re-listened to the podcast there.

Just for the record, I've watched all of the Hell Teacher Nube anime (excluding the movies) in raw Japanese and read a good chunk of the manga (In Chinese).
And yeah, I like it, so you're not alone.

Really? Awesome! Maybe we could do some trading! I have a couple of movies/specials, an episode of the TV show, and a big chunk of the manga in a Chinese anthology as well.