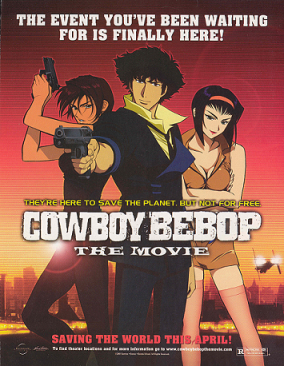 This is about incredibly adhesive breasts, dogs wearing pumpkin hats, and being extremely similar to another villain.

Aww, no comments yet?

Ok, I'll go. I feel like a total lame-ass, as I have not seen this series yet. I keep meaning to watch it, but I never remember to pick it up. When I do get to it, I'll make sure to watch the movie afterwards so I have something to compare it to.

Well the "M" word and the "R" word never came up, so no really touchy fan has started a rant - yet.

Actually, this movie is the only thing I have ever seen of Cowboy Bebop. I thought it was done well, but it wasn't revolutionary. I guess "revolutionary" is what the TV series was for. I also guess most other people have the same opinion after listening to the podcast. It's kinda hard to argue when you're in agreement.

If you really must have comments after a podcast... Tell me, what do all of you think of hollywood grabbing 1960s anime and Streamline video's old library for remakes, like Speed Racer, Akira and the "R" word? This has happened at least once before (Fist of the North Star had a live-action-USA remake in 1995), but never with, well, vigor behind it.

I really need to re-watch the series to remember what I think about it, since it's been so long and don't feel like repeating what everyone else says about it...but the movie, the most recent CB thing I've watched, comparatively speaking, is pretty fun. Or perhaps it had enough fun moments to make it watchable, to put it another way.