The next day we awoke from our auction induced comas. Most people weren’t returning for the tin auctions the next day, but there were a few pieces Sanjeev wanted to bid on, and I needed to get a lot of pick-up shots. We arrived a bit late due to us having to pick up Diceone and his friend but we didn’t miss any of the auctions we wanted to see.

The world of tin collecting is a mystery to me. While I appreciate that they are the ancestors of what I collect now, I just don’t get into the aesthetics of them. Sure, I like the Japanese character tins, but it’s a collecting road I just can’t go down. 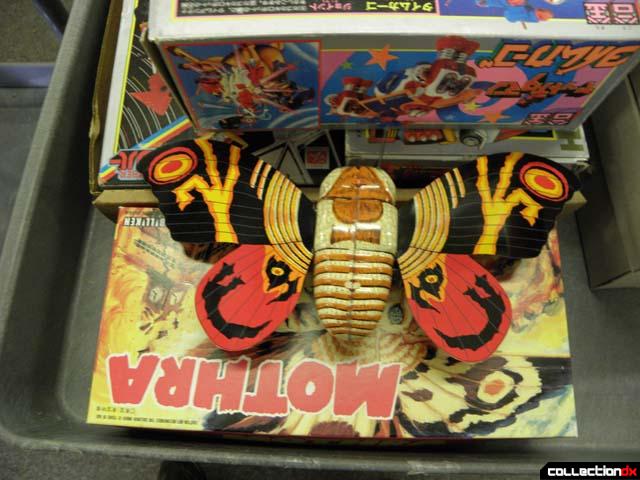 That being said, tin collectors are insane. You think the vintage diecast can get expensive? Think again. Some of the pieces that went sold for over 10k. Where the action on some of the diecast was slow, the tin was HOT. This is probably due to a larger, more established (and recognized) collector base. What WE think of in regards of vintage Japanese toys goes back to the 60s, for them, its another 20 years earlier.

I dropped Sanjeev off at the auction, and not wanting another Mennonite sandwich, made my way to the Dunkin Donuts across the street. I know in different parts of the country they have slightly different regional menus – but this was insane. Peanut Butter and Jelly Donut? Crushed Peanut Donut? Cherry Topped? WHAT? And most importantly – NO CHOCOLATE STICK! 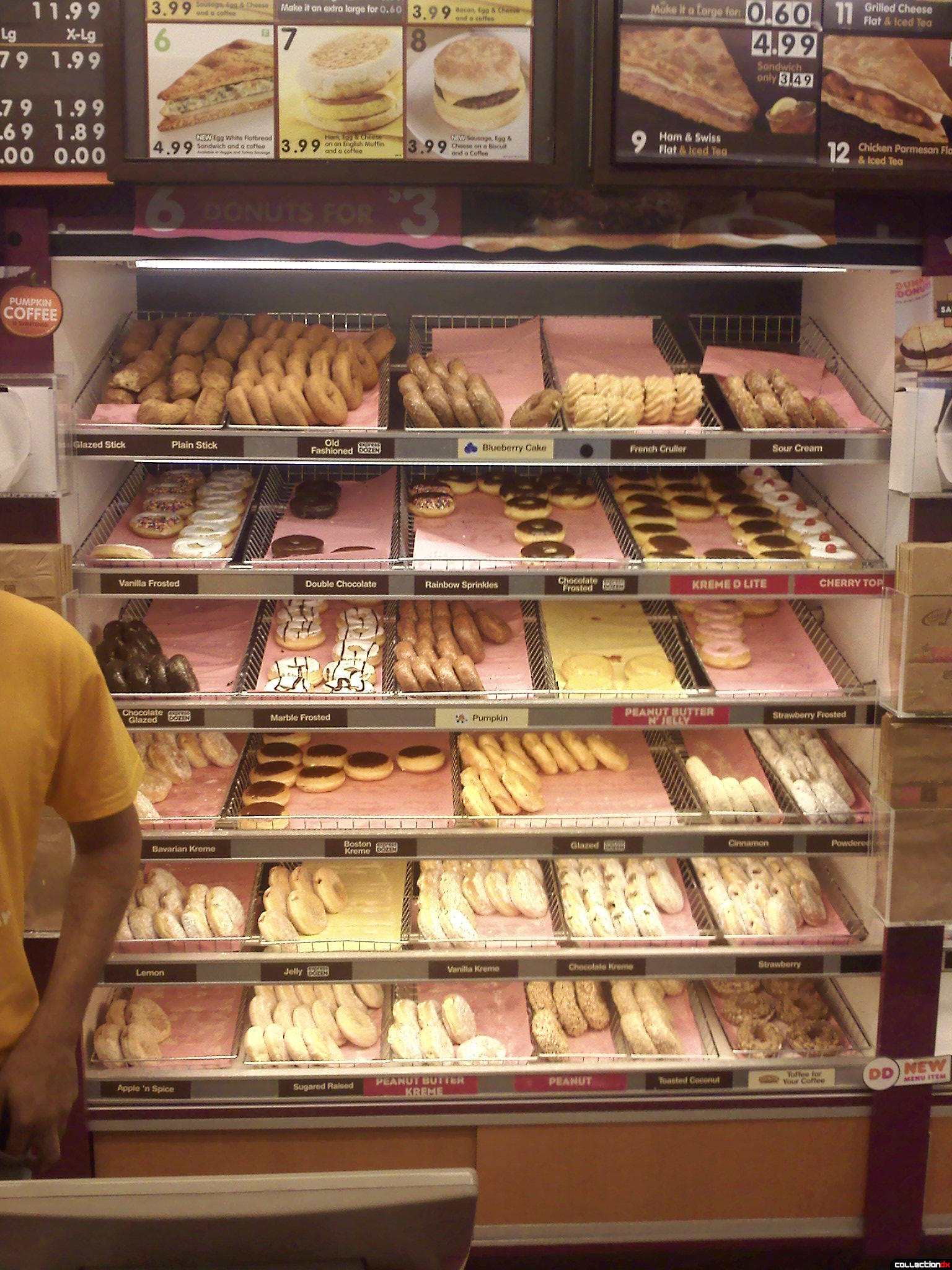 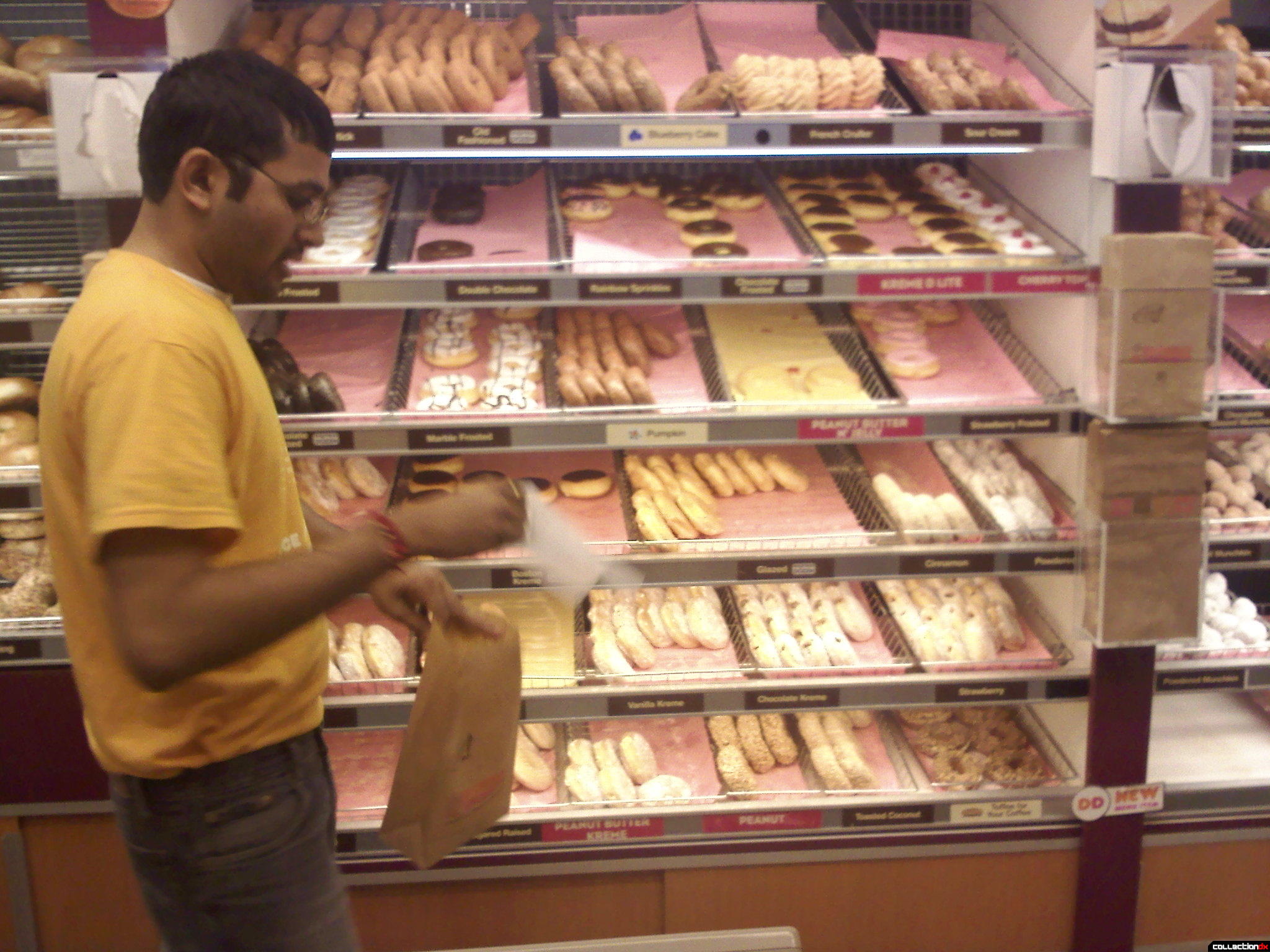 Another reason to hate on Pennsylvania.

Back at Morphys, people who were bidding on tin were doing so, and others returned to claim their loot. Half the fun was seeing what everyone won, and even doing some on-the-spot trades. 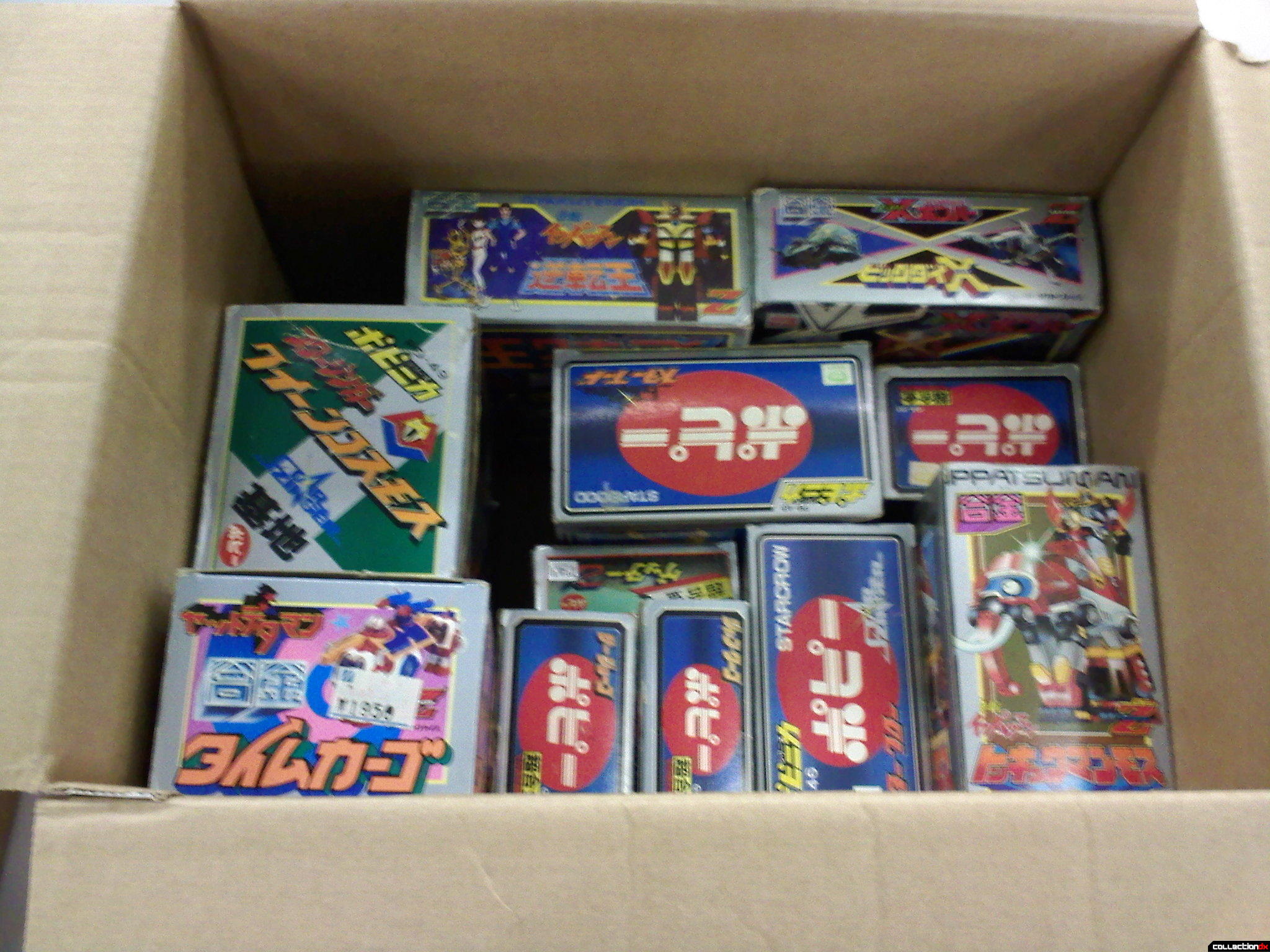 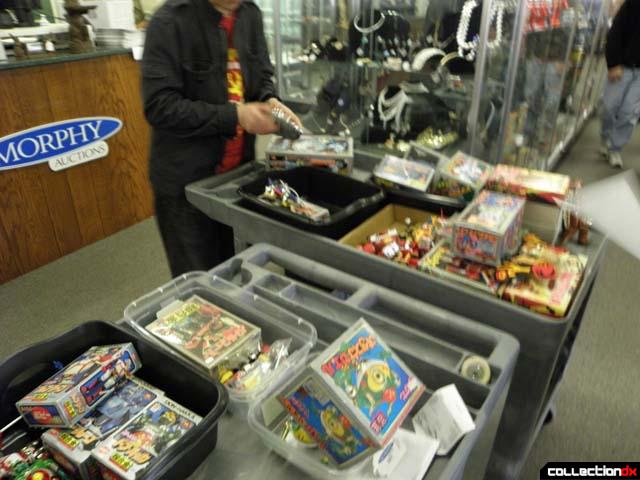 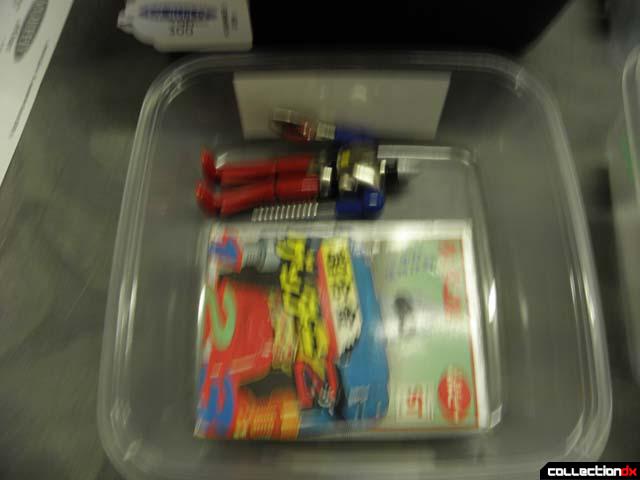 Early in the afternoon, after our gang had got all their stuff together, we decided to check out a comic store in Lancaster called simply “the Comic Store”. The store is decent by the way, if you want to check it out. Decent for being in the middle of nowhere anyway. 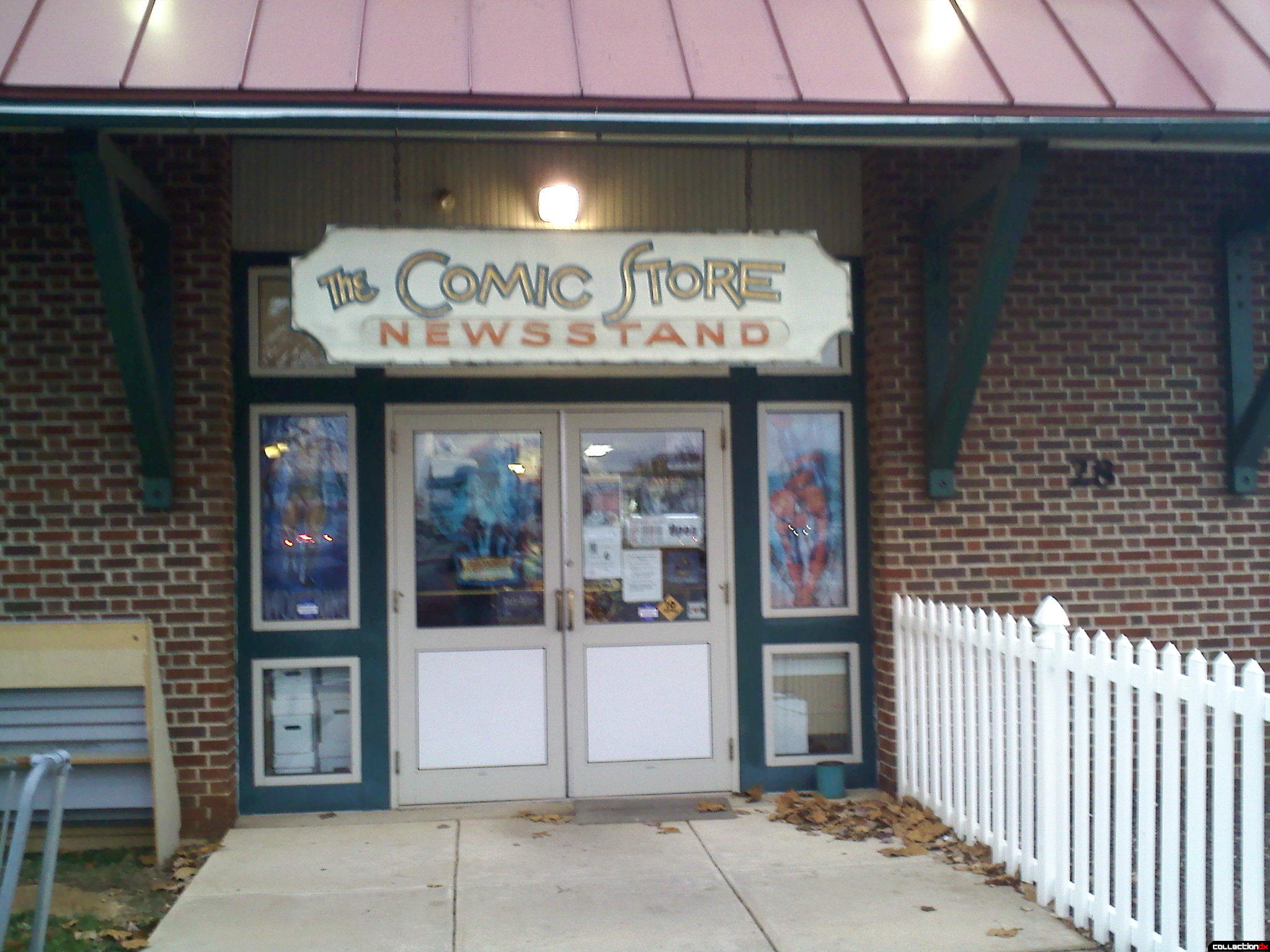 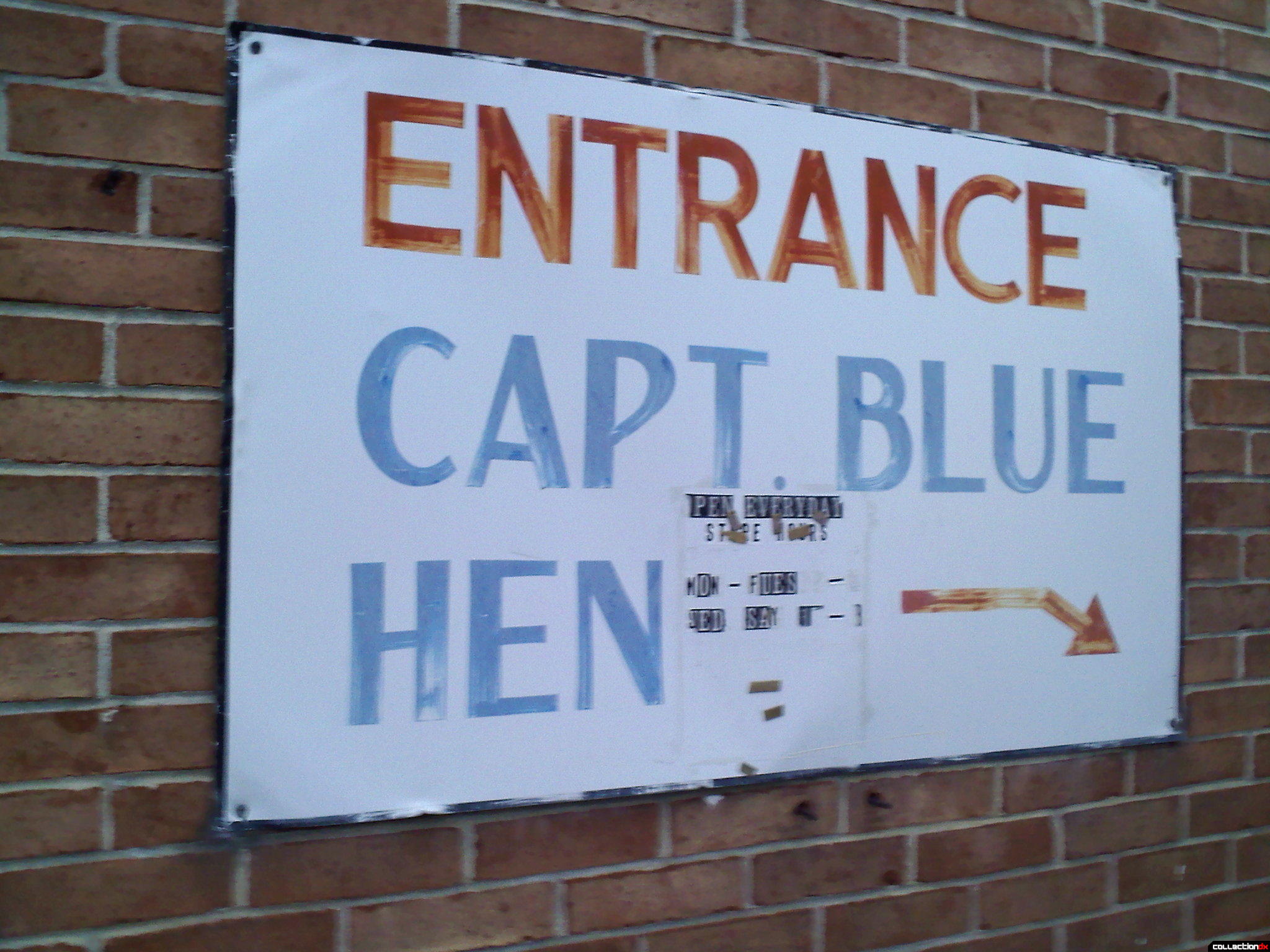 We found the comic store, only to find it closed. It’s in the basement of an old church… super creepy. I’ve since found out it closed last year. 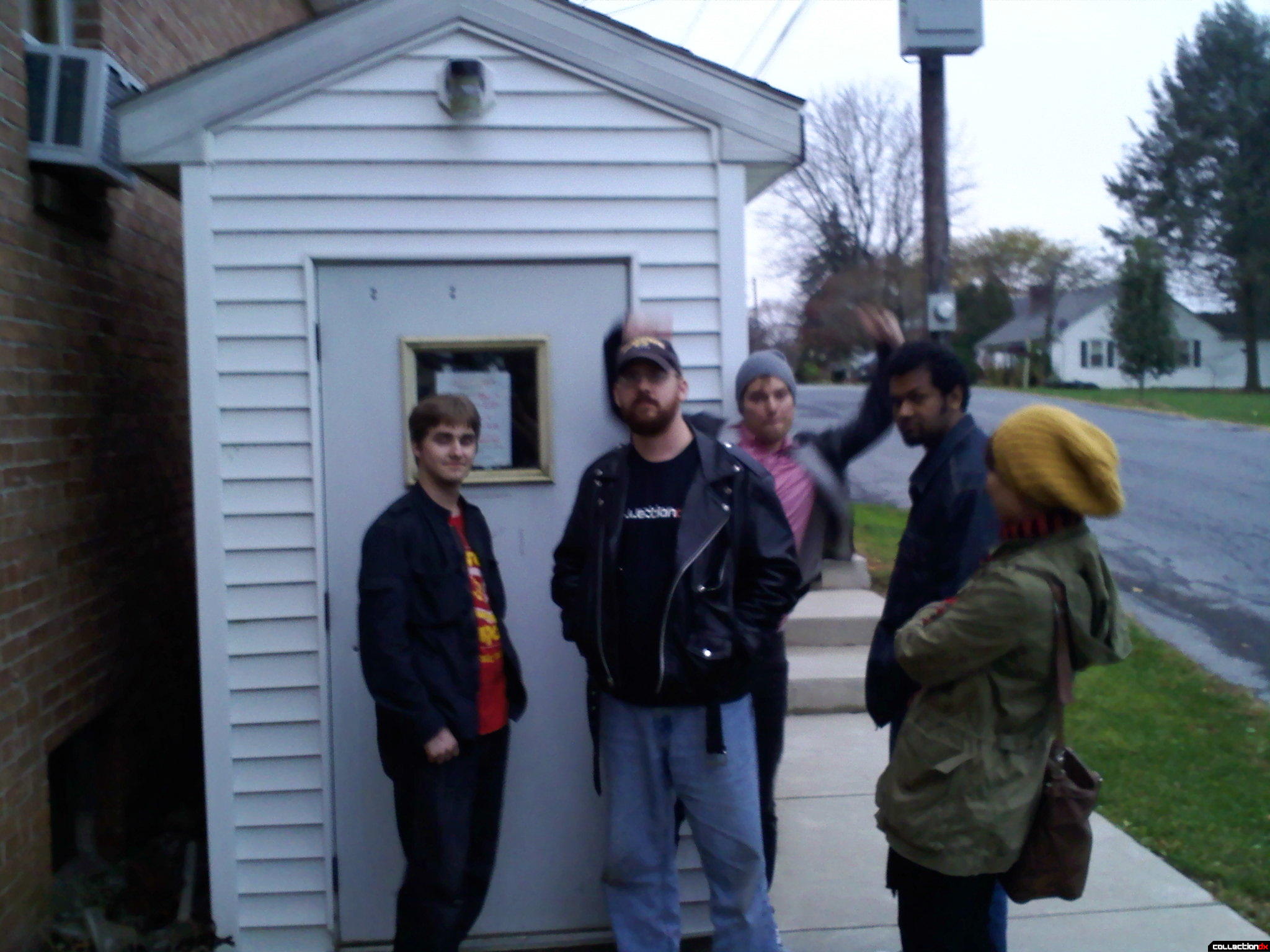 From there Diecone talked us into going to a 99c store where we found some bootlegs, and the worst halloween costumes ever. 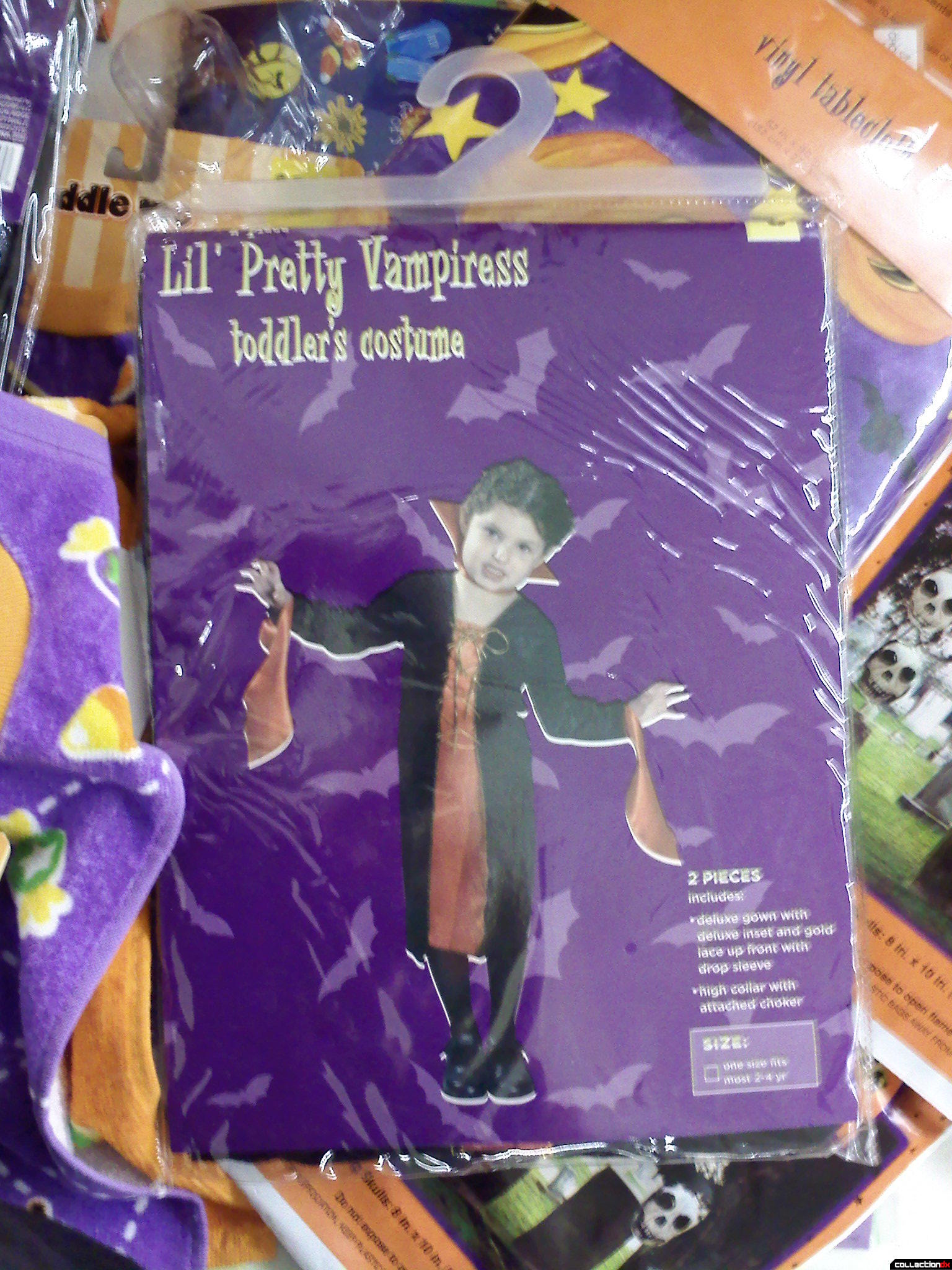 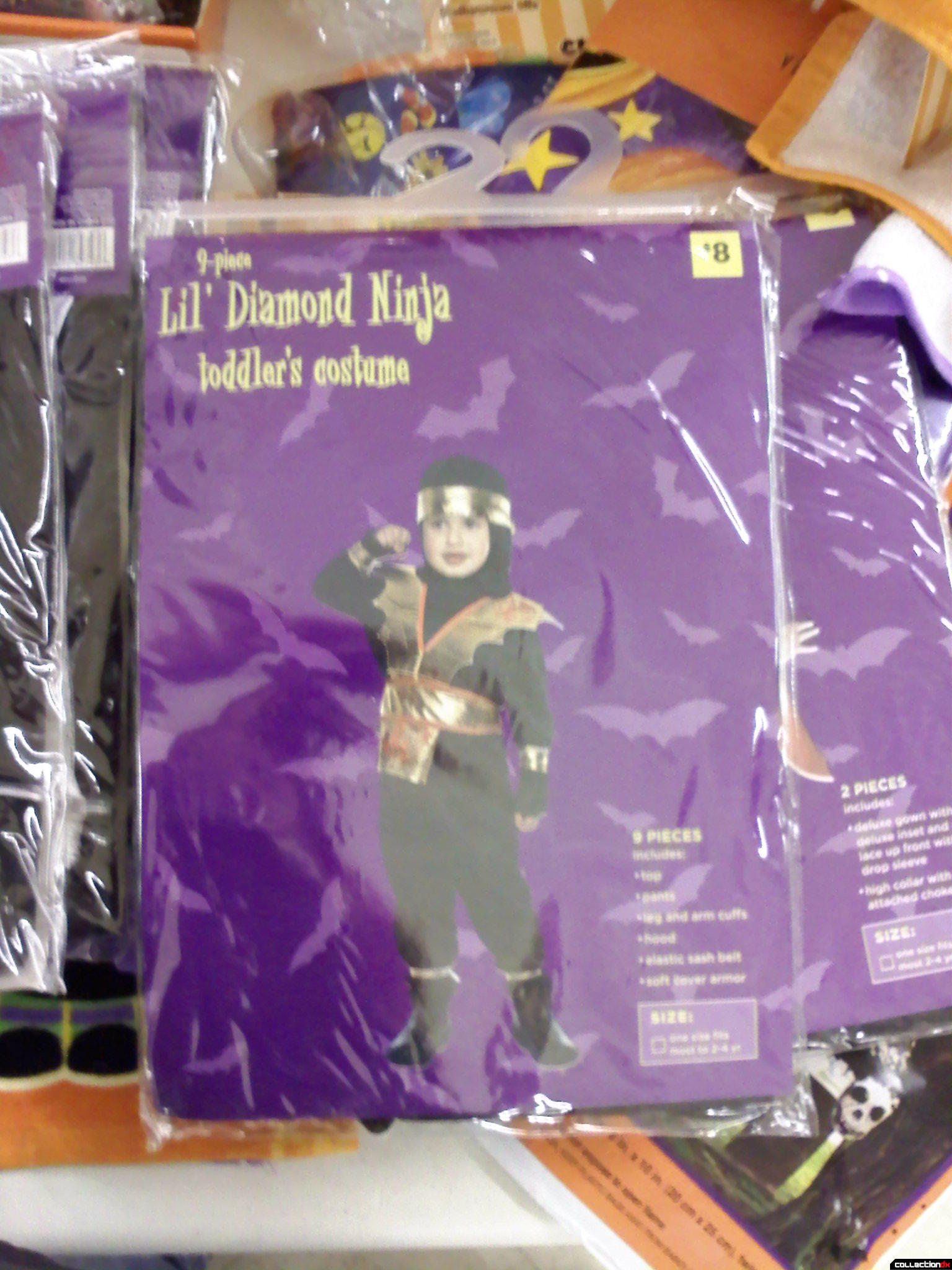 From there, we just decided to head home, as Jerilock needed to split.

The ride back was fun. We were tired, we taped it. You can watch it below.

After that we went to Hooters and loaded up on wings. All of the Hooters near me have closed, so this was a treat. It was there that we hatched a plan – I needed beer. Not just any beer – Yuengling. You can’t get Yuengling in Massachusetts or New Hampshire, so anytime someone comes back from PA, I have them get me a case. Well it was decided that I was going to get my own case. Jason called his sister, who lives in PA, to give us the lowdown with PA beer laws. Apparently, You can only buy beer from one kind of store, and wine and spirits from another. And you can buy before noon on Sunday. Well, our plans had us on the road before noon, so tonight we were off in search of beer.

I asked the hooters waitress if she knew where I could get any beer. She gave us vague directions – three miles down that road, a place called Michaels near Bed bath and Beyond.

Our next stop is at a convenience store, with a proprietor who is not from here, and knows little English. Once he finally understands what I am looking for, he says he doesn’t know where, and I leave. However as I pull out, he runs out to give me directions to another place he THINKS it might be.

Off we go again. I don’t know if it was his directions or fate, but we found the place. This was so hard – around here there is a packie around every corner.

This place that we find, it's a weird mish-mash of convenience store, deli and restaurant. It is here that I learn the next two quirks of the PA beer laws.

It has something to do with the quantity of beer sold. If you want to get beer by the case, you can only buy it at a beer distributor. If you want to get it as a 6-pack, you can get it at a bar. Well, technically, It is any establishment that serves booth food and beer – they can sell you a 6 pack.

I decide on 1 12-pack and 2 6-packs. I bring them up to the counter and the grizzly old man behind the counter tells me nicely that I can buy these, but I have to do it in two purchases. Once I make my purchase, I may take one 12-pack outside, leave it on the sidewalk, and then I can come back in and take the 2 six packs.

People behind me in line giggle. Apparently there is some archaic beer law in PA that says you can only purchase only 2 packages of beer at one time. I comply, I carry my one 12-pack outside, come back in, and grab the other two. Surreal.

Beer in hand, we get back to the hotel room. We are tired. We just want to go to sleep.

I hit the bed like a dead man. Sanjeev is checking mail on the laptop. Dave is in the bathroom dropping the kids off at the pool. The room is dead quiet, and I am just about asleep when I hear moaning through the wall. But not the good kind of moaning.

I tell Sanjeev to be quiet and listen. We put our ears up to the wall and hear a muffled crying. At first it is just crying. Then we make out “Oh God..” “Oh God please help me...”

Now Sanjeev and I are being dead quiet, trying to listen to the moaning guy when dave drops a loud bomb in the bathroom. Sanjeev and I explode with laughter. The timing was just so perfect, the room so quiet. Dave's comedic timing is amazing.

Sanjeev and I go to the front office and talk to the lady, who tells me that guy has been having problems, something about his mother having a stroke. Anyway, she says she will take care of it.

The rest of the night is uneventful, with a few more moans, but I couldn't tell if that was Dave or not.

Our adventure is almost over. Sleep becomes us.

The next morning, we check out and hit the road. Dave and I torture Sanjeev with two straight hours of ween from my ipod. He sleeps through a lot of it, but one can only hope it warps his subconscious mind.

It was a long, strange trip. It was full of good friends, some that I have known forever but never met. The weather sucked, but that didn't dampen anyone's spirits. I spent too much money, but now the buyers regret is gone. All I have is good memories, and a box full of toys.

Thanks to Sanjeev, Dave and Jerilock, I couldn't ask for better traveling companions. I didn't want to kill any of you once.

Thanks for sharing, Felt like I was there too.

...man Josh, you should have just gone to the neighborhood WaWa's convenient store instead and got some Tasty Kakes goodies (love their pies, "kandy cakes" and krimpets). I always stock up everytime I make a trip to PA! Oh, and WEEN rules!

The most important part of these recaps is enumerating how badly Pennsylvania sucks. I used to live there, in Reading for a couple of years and Pottsville (home of the Yuengling brewery) for one interminably long year.

Lancaster is the worst because of the overwhelming knee-jerk Christian population there. I remember during the early 90s there were people trying to get Halloween celebrations shut down, and at least one of those comic stores was being picketed on a regular basis for selling RPGs.

PA is a wretched hive of scum and villainy.

I'm right down the road in Pittsburgh but I had company all weekend and couldn't go, so thanks for the awesome coverage. I could cry for having missed it, but the insight regarding the conditions some of these toys takes some of the sting out of it. On the plus side I went to the local train show and scored a C-8 twelve back Jawa for $50, so I'm thinking that these auction results do not indicate anything other than the fact that people can't be buying stupid stuff at this time, and current pricing reflects that.

Yuengling, Ween, the first real milestone in our hobby's recognition... all good reasons to hate on PA. You did make one mistake, however, by not snagging a fresh Shufly Pie.

I stopped at that very same comic store before I left PA. If my timing was better I might have run into you again.

Didn't get any comics, but I did pick up a miniature Giant Robo.

I also stopped by Metropolis, the owner of which I met previously at the after auction party. He actually had some nice things, but I was pretty dry after the auction.